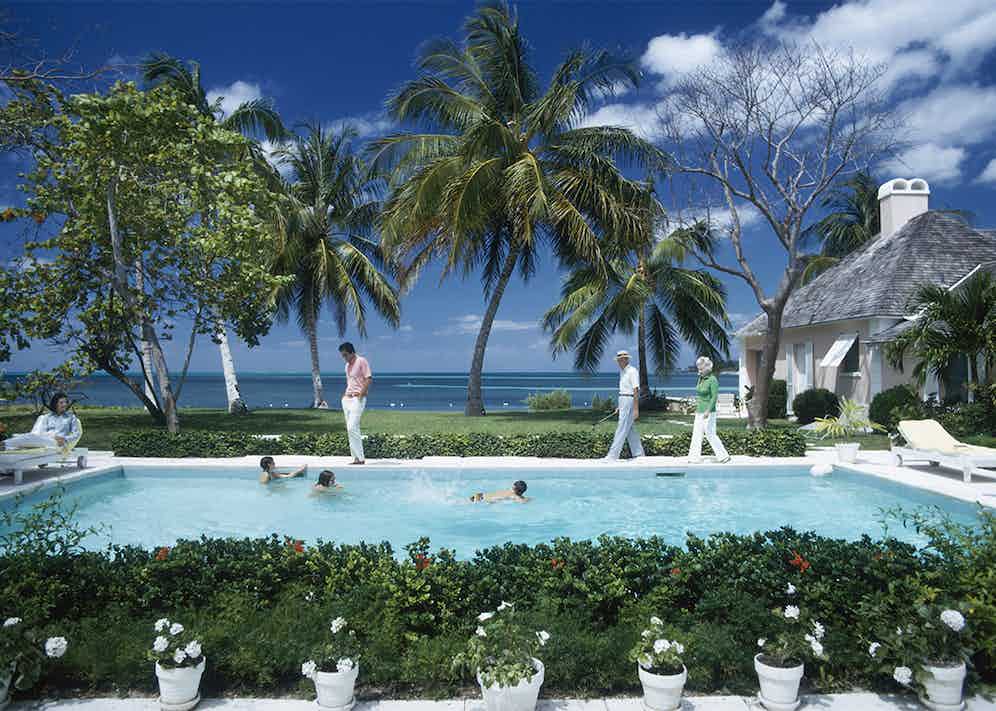 Former executive and philanthropist Leonard Dalsemer and his family at their villa in Lyford Cay, New Providence Island, April 1974.

Ladies of Lyford Cay’ is, at first sight, a fairly straightforward vision of bliss. Taken in 1974 by the American photographer Slim Aarons, it looks like a happy-accident snapshot of a natural grouping of beautiful women of various ages, at ease with each other, themselves and their surroundings. At second glance, it becomes clear this is a portrait not of the simple life but of the Good Life. These women have the kind of tans that suggest rather more than a week of holiday each summer, and breeds of dog that half a century later still denote a certain level of income and fashionability. What’s more, they’re standing on a perfectly white beach that is otherwise almost completely deserted.Beyond this, though, lies a further level, one that tells you just how Good this Life is. To access this level, context is needed, and for that you’d have to possess a decent working knowledge of lapsed European royalty (who is Baroness Meriel de Posson, standing far right?) and Ivy League financiers (Mrs. Dauphinot?). If this isn’t available, perhaps the photograph’s title will do: the small Bahaman enclave of Lyford Cay, after all, means all these things. 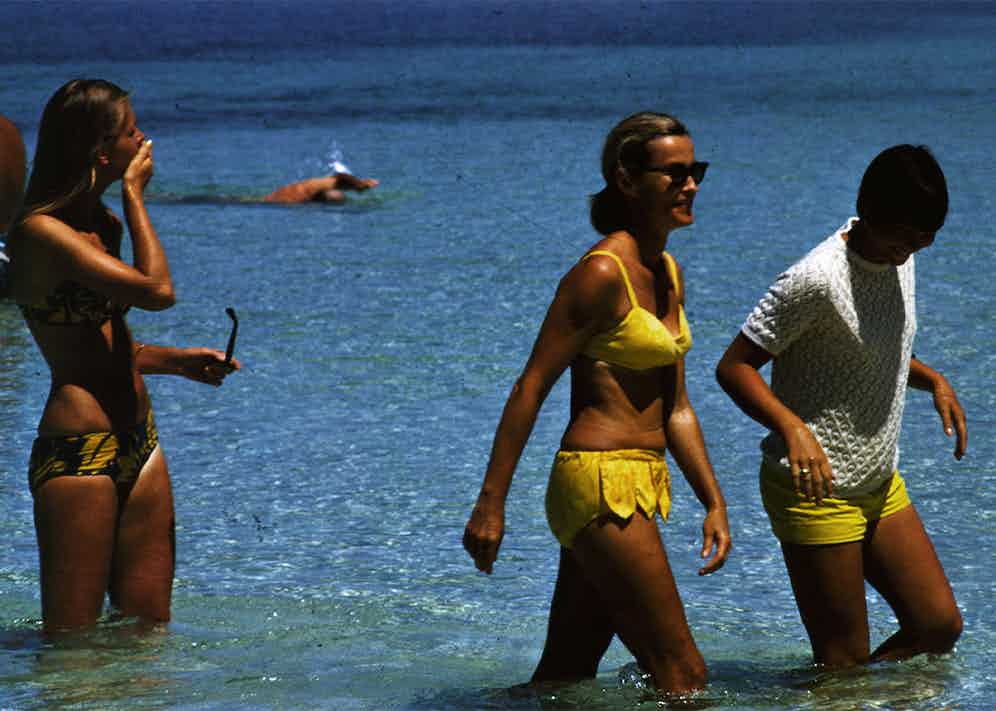 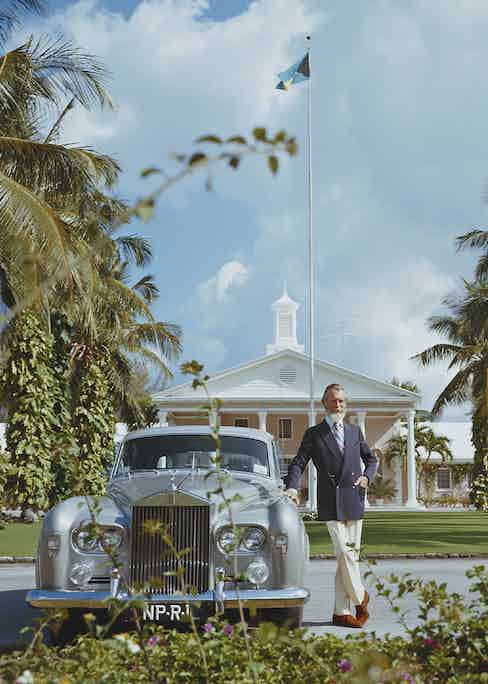 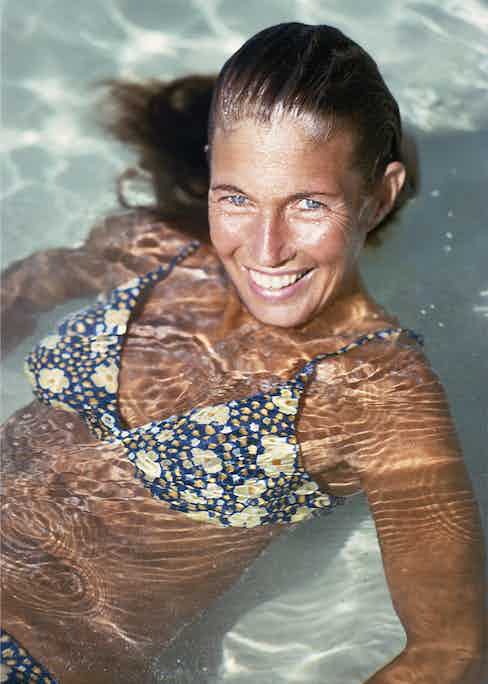 Slim Aarons was the grand chronicler of mid-century high society, at a time when the Europhile roots of the Gilded Age were still holding off the gathering forces of a new, more diverse and younger America. Here, the insouciant elegance of Cary Grant and Katharine Hepburn remained the aspiration rather than the restless dynamism of Elvis Presley and Ann-Margret. His forte was to capture the ultra-rich at leisure, employing chameleon- like social skills to portray the glamour of the WASP existence, capturing a moment where starchily appropriate behaviour met the extreme leisure that a money-no-object life could provide.

For Aarons, Lyford Cay was the perfect backdrop, a private playground where the prices were high enough and the rules sufficiently old-fashioned to ensure that any resident could be confident they would be relaxing among their own. His photographs of the community span the early sixties to the early eighties, the golden era of this strangely downtempo-society enclave where being seen was precisely not the point. 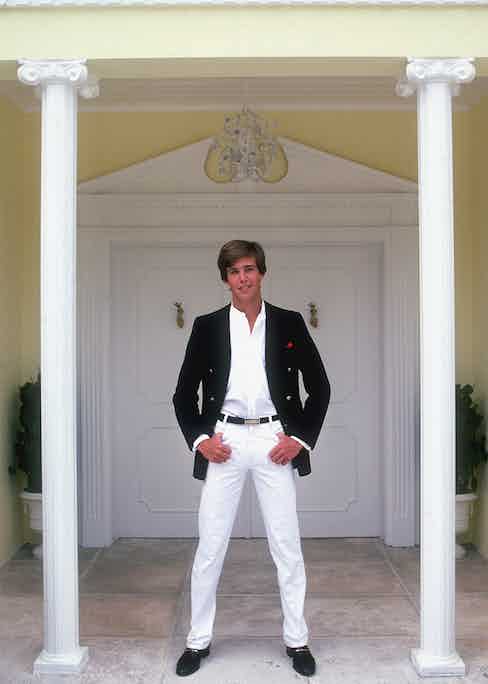 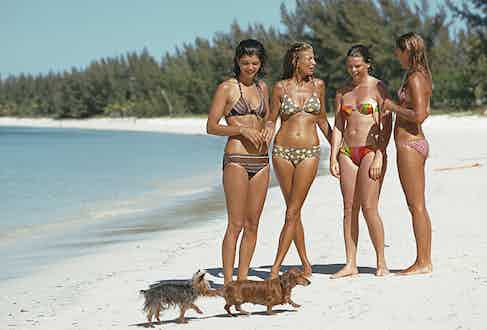 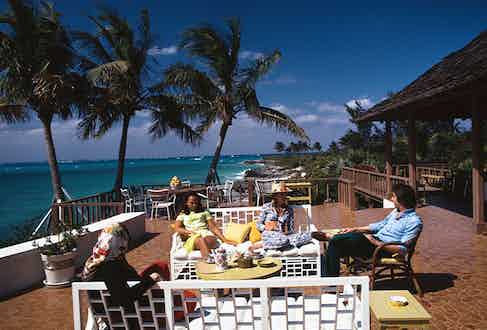 Other regulars who fell under Aarons’ gaze included the newspaper owner Edward W. Scripps and his wife, Betty, and the British politician and Governor of Bermuda Lord Martonmere, with his wife, Maysie Gasque, a Woolworths heiress. Show business, though, was notable by its absence. Brigitte Bardot and Gunter Sachs dropped in during the sixties, but decided Saint-Tropez was more their pace. Actress Dina Merrill appears in Aarons’ pictures, but her presence had more to do with her first marriage to Colgate heir Stanley Rumbough. The novelist Arthur Hailey, author of Airport and other mass best sellers was a long-term resident (and even wrote a history of the area), but Lyford’s only real star was Sean Connery. Introduced to the Bahamas when he filmed Thunderball there, in 1964, he came back for the golf and eventually found Lyford perfect for his needs, covering both privacy, a congenial tax system and the full 18 holes on his doorstep. He remained there, a popular member of the community, until his death in 2020.

Read the full story 'Like The Fifties Never Went Away' in Issue 84, available to purchase on TheRake.com and on newsstands worldwide now.