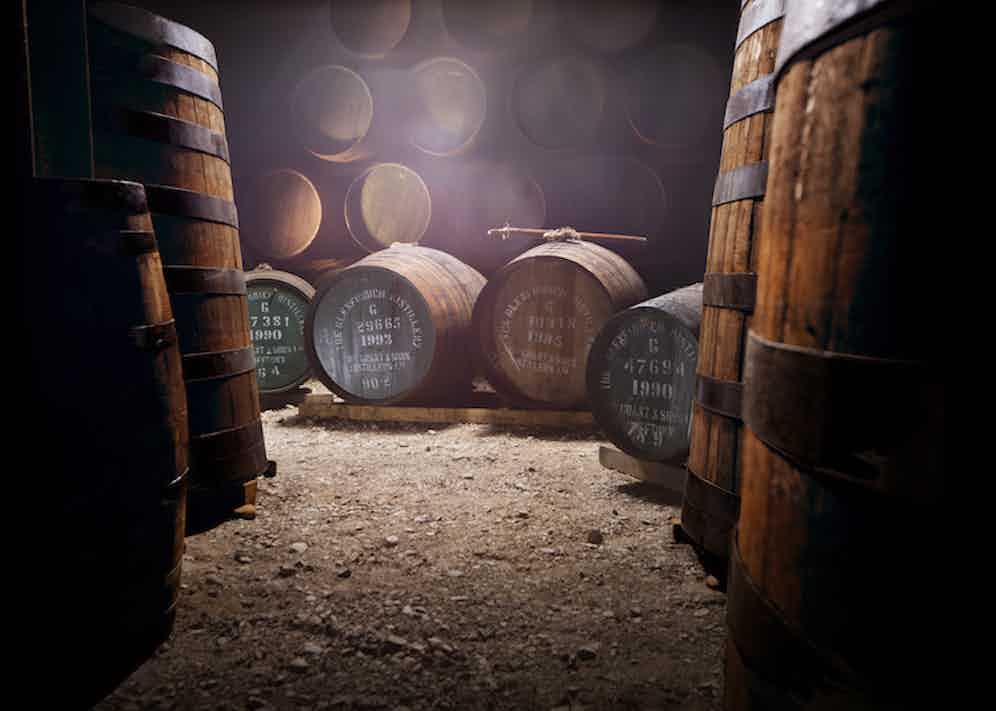 About an hour and a half's drive north west of Aberdeen, nestled in amongst the granite-stone, pine-covered peaks of the Cairngorms, those who dare to make pilgrimage may stumble across a rather special place, a veritable Vale of Avalon of the Scotch whisky world. This place is of course the small, ramshackle Highland village of Dufftown, in prime Speyside territory, a settlement built in effect by the Scotch whisky industry, which remains a home to several of the oldest and most prestigious distilleries in Scotland today.

It is no surprise then, that this is the place chosen by William Grant, to build the distillery of his dreams - arguably the doyenne of all the great highland distilleries - Glenfiddich. Grant chose Dufftown partially because it was his birthplace, but also for its proliferation of barley farms, which exploit the rich alluvial soil of the area to grow the very best crop. Even today, Glenfiddich prioritises the purchase of superior locally grown barley over foreign imports.

'Consistency, it seems, is the key. Glenfiddich is one of very few distilleries which can claim to have remained in family hands throughout its lifespan.'

What's more, the distillery sits nestled in a valley through which the Robbie Dhu runs, the stream that provides a constant source of crisp, mineral-rich highland spring water, ideal for distilling the purest Scotch. Clearly, Mr Grant knew what he was about, because the distillery stands proud in its self-same place today, incorporating the buildings which Grant built in 1886, with his life savings, bare hands, seven sons, two daughters and one stone mason over the course of a year. Nowadays, visit the distillery and you're really visiting an estate - the Grant family of today has purchased over 12,000 acres of land surrounding the distillery to ensure that their precious water source from the Robbie Dhu remains uncontaminated and of a consistent quality.

Indeed, consistency it seems is the key. Glenfiddich is one of very few distilleries nowadays which can claim to have truly remained in family hands throughout its lifespan and it is this continuity of care, knowledge and familial approach to the craft of whisky distilling that arguably gives Glenfiddich its extraordinary breadth and depth of flavour. The Grant family has had a solid 127 years to not only perfect their work, but also to innovate, experiment and above all elevate their once humble distilling operation into a high respected global icon of fine Scotch whisky. 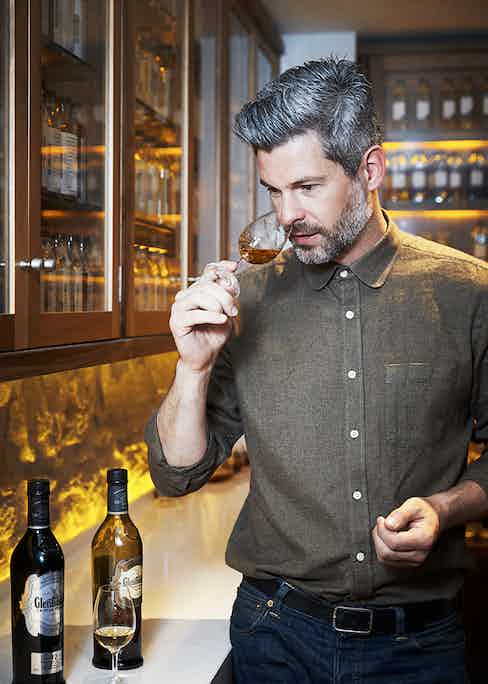 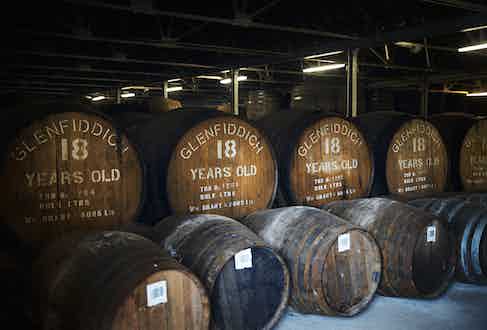 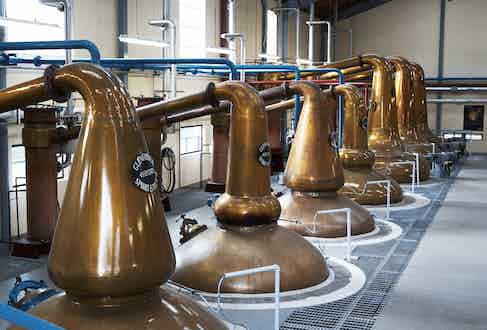 When it comes to the whisky itself, Glenfiddich's creations follow the conventional process for the distillation of Scotch; the grain is milled into grist, mashed and transformed into wort. Yeast is added to start the fermentation process and the wort is pumped into washbacks. This is then passed into one of the distillery's 31 stills for distillation, the alcohol is drawn off and laid down to age and marry as per the instructions of Glenfiddich's malt master. So far so good, but it is the combination of cutting-edge precision and a deft understanding of heritage, which filters through this process, that makes it so special.

Starting with the unique combination of locally grown barley and the spring water of the Robbie Dhu, Glenfiddich mill their grist into a combination of 10 parts flour, 20 parts husk - ensuring that the grist is the optimal consistency for drainage and for mashing. When the grist enters the mash tun, it does so an exact nine tons at a time, combined with the water of the Robbie Dhu at three different temperatures, before the mixture is heated to three different temperatures - ensuring that starch is converted to sugar in a particular fashion, creating wort.

'For all its post-modern precision and exacting stance, the distilling process still feels reassuringly human and traditional.'

Then the wort is transferred to the washbacks, which are not, as one might expect of such a large-scale operation, soulless stainless steel creations. Rather, they are made from Douglas fir trees, ensuring that Glenfiddich's distinctive fruity notes remain just as they were when Douglas fir wooden washbacks were first installed in the distillery upon its opening in 1887. Yeast is added to begin the fermentation process and then the fermented liquid is transferred to one of the still rooms. It ends up in a copper still which will be an exact part-for-part replica of the original stills employed by Grant and his family - once more in a bid to preserve the original character of Glenfiddich's spirits. What's more, the stills are still directly fired, just as they always have been, precisely for the same reason. They are heated up gently over several hours - ensuring that the fore-shots and feints (unwanted alcohols which are re-distilled) are allowed to separate from the 'heart of the run', the selected spirits which will go onto mature into the very best whisky. No computer decides on the separation of spirits; the Grant family prefers to rely upon the skill of its stillmen, in the traditional fashion.

The most deeply traditional, and one might say rather miraculous final element in this process is Glenfiddich's deft understanding of the process of maturation and marrying. For all its post-modern precision and exacting stance, this is the part of the process that feels reassuringly human and traditional, amply demonstrating the Grant family's continued respect for age-old methods and human expertise. Glenfiddich's Malt Master, Brian Kinsman, has the final say over how each and every individual run of spirit will be laid down, aged and matured - and as to how individual spirits will be married from cask to cask. Kinsman likewise relies on the skill of Glenfiddich's full-time team of professional coopers, to provide him with the very best casks possible to ensure that the spirits can mature in an appropriate fashion. 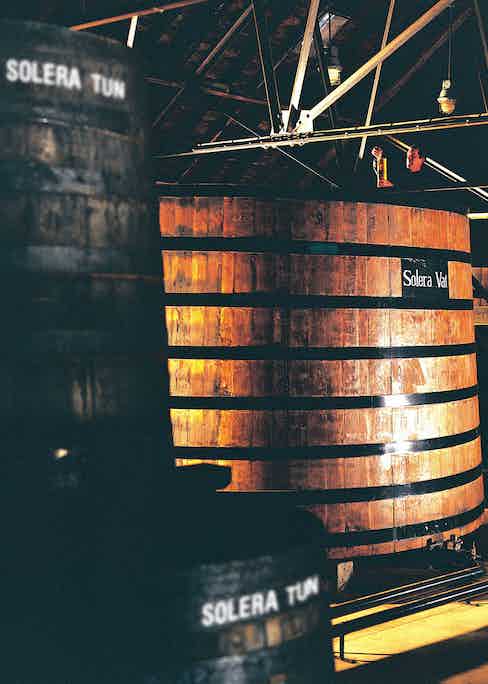 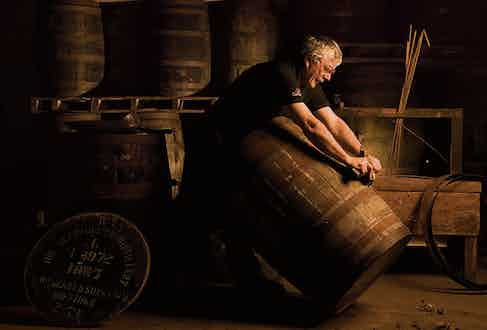 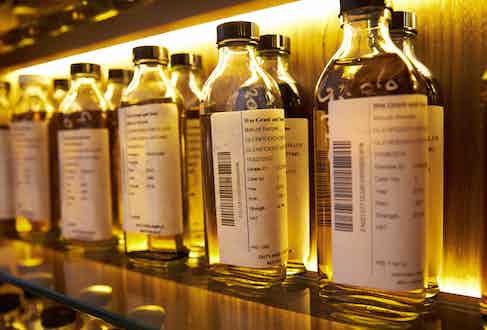 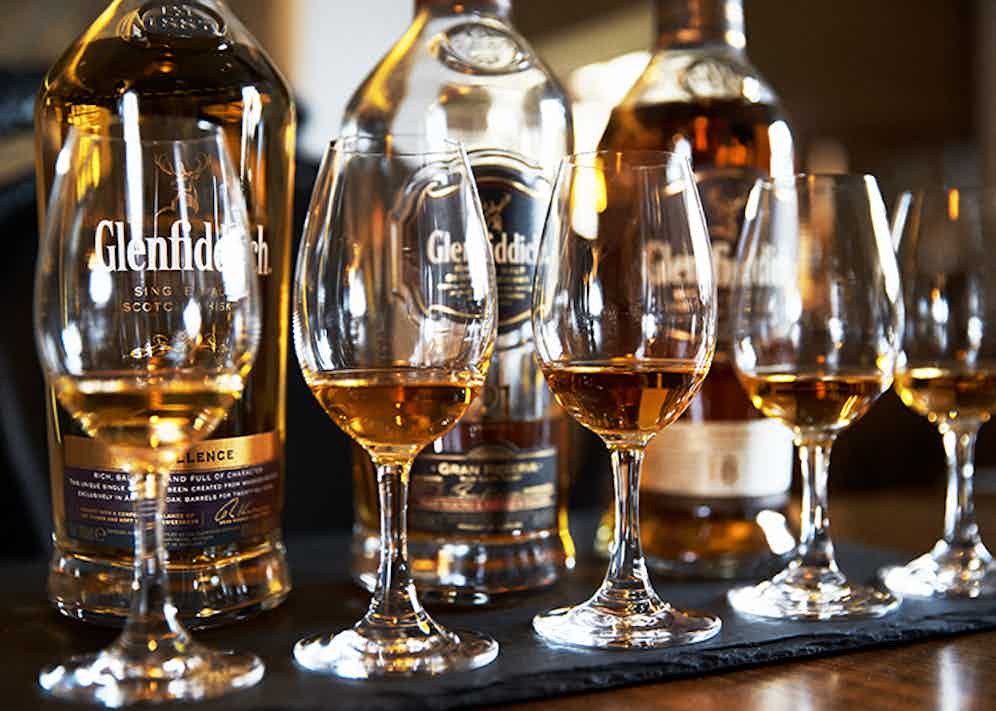 Then of course, there are Glenfiddich's whiskies themselves, a rare breed of expressions that benefit from this same high-tech consistency of approach and traditional quality of manufacture. The beauty of all Glenfiddich's whiskies is in the reality that each and every one, whether a bottle of the smooth and easy-drinking 12 Year Old or the formidable 26 Year Old Excellence, is really generations old in the making. As a continually run family business, the distillery's consistency of technique remains unaltered; age-old traditions are retained through direct transmission between the generations, whilst with new concepts, ideas and ultimately new expressions of whisky can be developed without losing this precious continuity. This makes itself clear in the tasting of Glenfiddich whisky above all else. Every Glenfiddich is impressively smooth (which might go some way to explain the whisky's global appeal) and subtle notes of highland grass and mellow oak form a consistent thread through many an individual expression.

Things get interesting during the marrying process, for example when Glenfiddich chooses to age its 15 Year Old in a rich combination of European, American and new American oak casks, before it is transferred to anespecially constructed oaken solera vat, which imbues into the whisky an exceptionally mellow smoothness. Intriguingly, the vat is only ever half-emptied, which theoretically ensures that at least some of the whisky which remains in the vat to this day is from it's original filling in 1998. The complex, warming flavours of the 18 Year Old is again the result of an idiosyncratic approach to the marrying process, combining as it does periods of maturation in Oloronso wood and then American oak casks, the quality of which are watched over by Glenfiddich's coopers in small, consistent batches.

'Each and every whisky, whether the 12 Year Old or the 26 Year Old Excellence Cask, is really generations old in the making.'

A year further down the line we come to a particular favourite, the 19 Year Old Age of Discovery Madeira Cask, which finished as the name suggests in a select collection of imported Spanish oak casks, previously used to age Madeira. The resultant liquour is rich with notes of caramelised fruit, earthy oak and spicy cracked black pepper on the finish. At the higher end of the scale, in amongst many other elevated drams sits the intriguing 21 Year Old Gran Reserva, proudly proclaimed to be 'raised in Scotland and roused by the Caribbean', given that the whisky is finished in a selection of bourbon barrels seasoned with Glenfiddich's own Caribbean rum. The rum is a secret recipe created by the Malt Master, specifically to season casks with which to elevate this Scotch into altogether more spicy, tropical territory than its counterparts. Top notes of ginger, lime and banana lift the palate, underpinned by an exceptional richness and warmth.

I could go on, but these select few expressions serve, amongst many more, to illustrate the exceptional scope of Glenfiddich's work. The distillery is a truly creative, long-standing influencer at the forefront of fine Scotch whisky production, informed as it is by an unbroken line of passionate familial owners, who take pride in producing Scotch of exceptional consistency, in the highest of family traditions. William Grant himself would doubtless be proud of the extraordinary legacy that he has passed onto his kin, and of the place in Scotch whisky history that Glenfiddich continues to carve out for itself today.