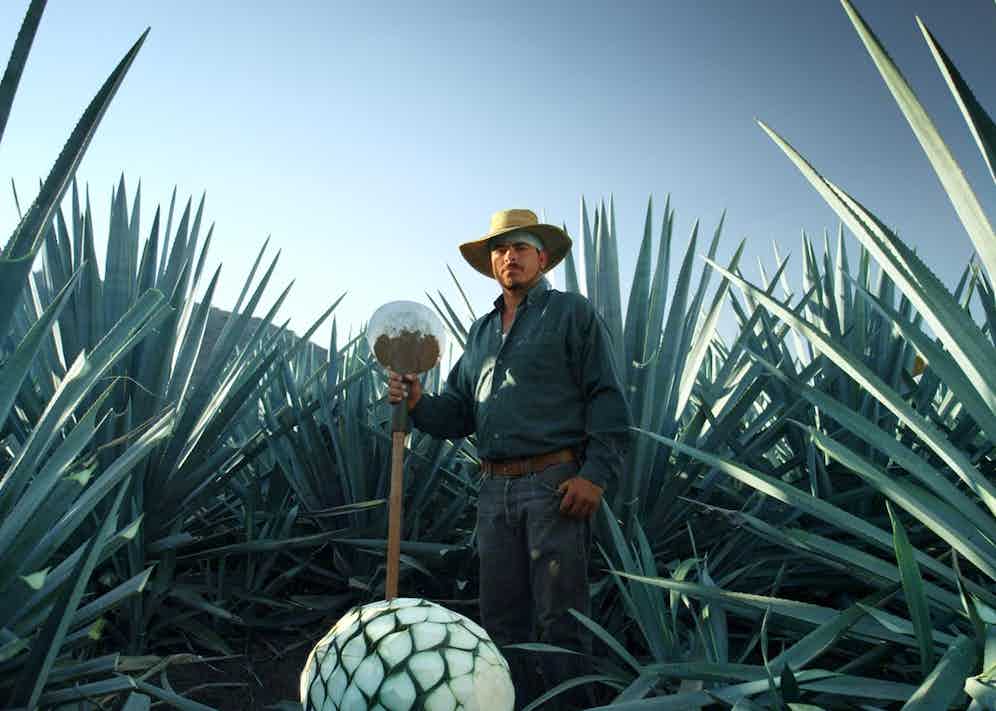 A jimador stands in a field of blue agave with his tool of the trade: a coa de jima.

Francisco Alcaraz speaks with a deep, raspy voice, carefully considering every word before uttering it. His hair, still as thick as a teenager’s, forms neat waves across his face, his dark eyes hidden behind a generous flick of fringe. His manner and the way he commands respect call to mind the infamous Don Corleone — and, in many ways, he is the Godfather of tequila. In his role as Master Distiller of Patrón tequila, he was responsible for developing the brand’s winning recipe close to 30 years ago, and, thanks to his intricate knowledge of the production process, has helped turn it into one of the most successful tequila brands in the world, while keeping its artisanal values intact.

Alcaraz’s story with Patrón begins like a scene out of a movie, too. The year was 1989, and Alcaraz was walking along the side of the road on the outskirts of Atotonilco El Alto, a town in Jalisco, Mexico. A man dressed all in black, with big boots and long hair, called out to him, asking for help: his name was Martin Crowley, and he’d been trying to do business with Siete Leguas, the tequila company Alcaraz was working for, to develop something similar to what they were producing. The owners, seven brothers who were still making tequila the traditional way, weren’t interested in what the ‘gringo’ had to say, so he turned to Alcaraz: could he produce the best tequila in the world? Having trained as a chemical engineer and worked as one of the first tequila inspectors, Alcaraz knew the production process like the back of his hand. “And I said, ‘No, I cannot do that. I cannot promise you the best tequila in the world, but I will do my best. I’ll give you a good product, I can promise you that.’”

Tequila has been given a bad rap. It’s been claimed by patrons of dive bars who consume it en masse late into the night, with a lick of salt and bite of lemon, and regret it in the morning. Or it’s mixed with orange juice and fruit syrup and served in a highball glass with an umbrella. But this gimmicky way of consuming it seems to be how the western world has interpreted Mexico’s national drink, rather than how it’s been traditionally enjoyed: inhaled and slowly sipped, savouring every last drop. In Mexico, tequila is taken as seriously as the French do champagne or the Scots do whisky — a regulatory board strictly monitors the production process, and only certain areas of Mexico are allowed to produce genuine tequila.

Jalisco, located in the west, is where this spirit is believed to have originated, and is the only whole state where tequila is allowed to be produced. Driving through the rural areas, it’s obvious just how integral the spirit is to Jalisco’s economy. The sparse landscape is constantly interrupted by flashes of blue and red — the spiky agave plants from which tequila is made, and the mineral-rich soil from which they grow. “This is the perfect environment to grow this kind of plant,” says Mariana Sánchez Benítez, a trained biotechnology engineer and Patrón ambassador. We’re standing between rows of the spiky succulents in the Los Altos de Jalisco, or the Jaliscan highlands, and it’s easy to grasp the exact conditions under which these plants thrive: it’s hot and dry, and the sun beats down on the fields through a cloudless sky. Birds of prey can be seen soaring high up in the distance, and ants the length of a small fingernail scurry underfoot. The agave field workers, called jimadors, wear wide-brim straw hats and loose-fitting shirts to deflect the heat. 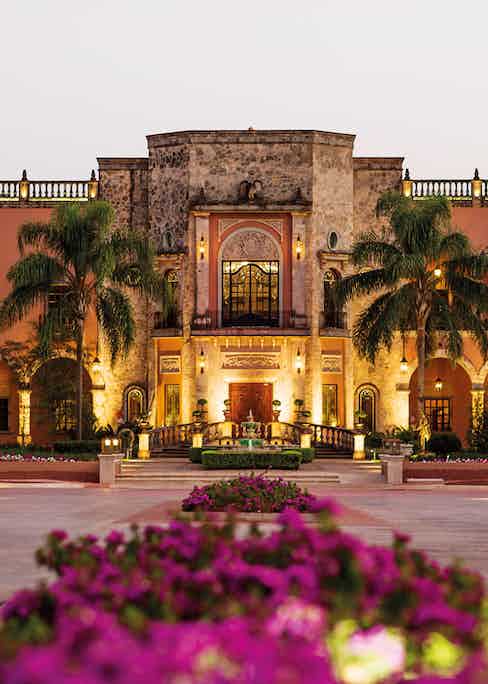 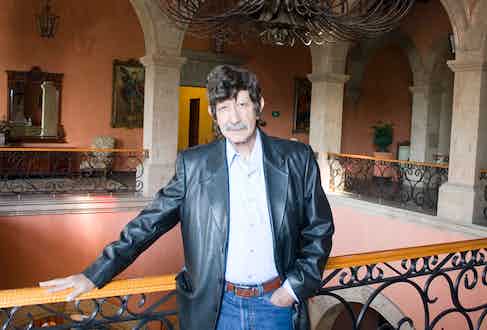 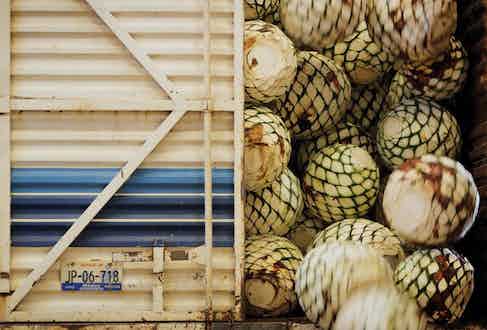 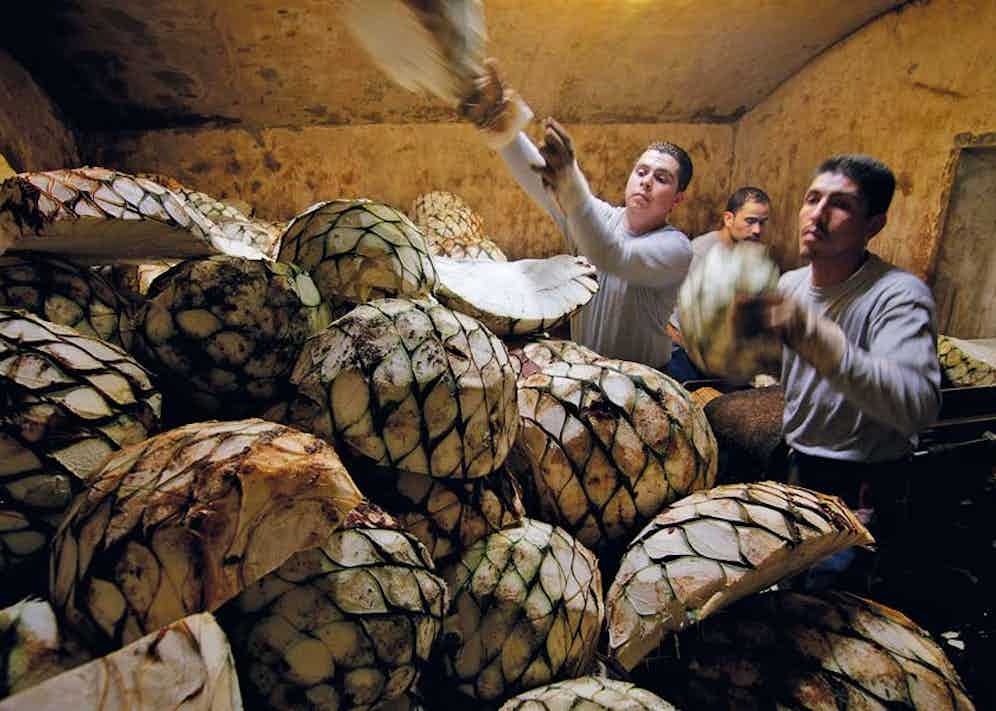 The plants closest to us are fully mature — which generally takes between six to eight years — and are ready to be harvested. Like a globe artichoke, the leaves of the agave must be removed to reveal the heart, called a piña, which is the only part used to make tequila. Using a coa de jima, a long-handled tool that has a circular, flat and extremely sharp blade, the jimadors slice the superfluous leaves off the plant, cutting close to the heart and leaving only the white flesh. The workers then check for sugar content, which for standard tequila production is a minimum of 15 per cent, while premium brands such as Patrón require at least 21 per cent.

Not more than an hour’s drive from the agave fields is Patrón’s hacienda, which is where all the brand’s tequila is made, distilled and bottled. The pink-washed walls of the grand, Spanish-influenced building stand out against the comparatively flat landscape, which is dotted with the same blue agave plants. With archways that stretch up the front and palm trees lining the entranceway, it looks as if it should house royalty rather than furnaces and vats of tequila. Inside, Patrón has around 1,600 employees, who mostly live around Atotonilco El Alto and who are highly skilled in what they do, whether cutting, operating machinery or bottling. Part of Patrón’s ethos is to provide work for the local community, and so tasks that have been automated by machines in many other companies are purposely done by hand. “We could easily replace these people with machines,” says Sánchez Benítez, “but that would be getting rid of the community of tequila.”

The production line starts with the piñas, each the size of a large watermelon, which are stacked in piles, ready to be transformed into bottles of tequila. A large piña weighs around 32 kilograms, and will produce a case of tequila, so the value of each one is significant. Workers in the factory wield huge axes, which easily slice the piñas into pieces, which are then loaded into the mason brick ovens to be roasted. They’ll stay in there for 79 hours, where the natural carbohydrates are transformed into sugars. A raw piece of agave heart tastes starchy and watery, but once cooked it takes on a sweet, earthy flavour, much like a juicy piece of dried fruit. This is integral to the tequila-making process, and this same flavour can be detected in the finished product.

Once cooked, the agave is either loaded into pits and crushed with a tahona wheel made from volcanic stone, which is the traditional process and is used for Patrón’s premium spirits, or crushed using a more modern roller mill. The fibres are then transported into wooden vats, where they’re fermented for a further three days before being distilled two or three times. If the tequila is destined to be añejo, or aged, it will be stored in oak barrels to further develop flavour and colour. 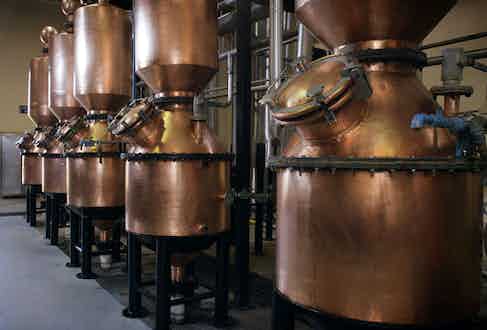 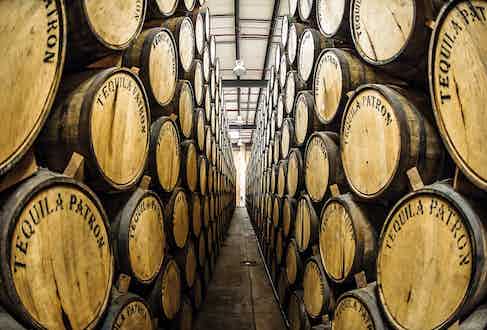 The main aspect that sets premium tequila apart from the kind that’s more likely to be poured into a slushy machine is in the agave content: luxury brands such as Patrón use only 100 per cent blue agave sugars in fermentation, while mixto contains 51 per cent blue agave (the minimum amount for it to be classified as tequila) combined with other sugars, usually cane. Patrón is in large part responsible for introducing the former variety to the United States, where predominantly cheap, bottom-shelf tequila had been consumed prior to the turn of the century. Between that original roadside conversation in the late eighties to now, Patrón has grown from an entrepreneur’s whim to producing three million cases of tequila each year, which are enjoyed — straight or mixed — by enthusiasts around the world. “In the first year we sent 268,000 cases,” says Alcaraz. “Then we started increasing the volume of cases every year, and they didn’t notice the difference of the product. I think that’s my big achievement.”

The key to this, Alcaraz says, is in the way they’ve scaled up Patrón’s production processes. “We clone. We don’t increase the capacity of the equipment, just clone the same capacity. It’s much more expensive — you need more hand labour — but that’s the philosophy of the company, so it’s fine. We want to give work, not to automate.” This formula, combined with the original idea from co-founders Crowley and John Paul DeJoria, to take quality tequila to the rest of the world, has helped cement Patrón’s status as the biggest producer of 100 per cent blue agave tequila outside Mexico. “We are still a very young company,” says Alcaraz, “only 28 years since we started. I am very proud.”

It’s said that tequila created using entirely blue agave won’t give you a hangover because of the purity of the sugar. Having visited Patrón’s factory, and sampling a generous amount of the stuff, I don’t think that statement can be accepted as fact. But what Patrón can lay claim to is creating a premium spirit that respects tradition, providing work for the local community, operating its business in a responsible way, and, most importantly, telling a great story. Which, all things considered, makes having a headache rather worth your while.