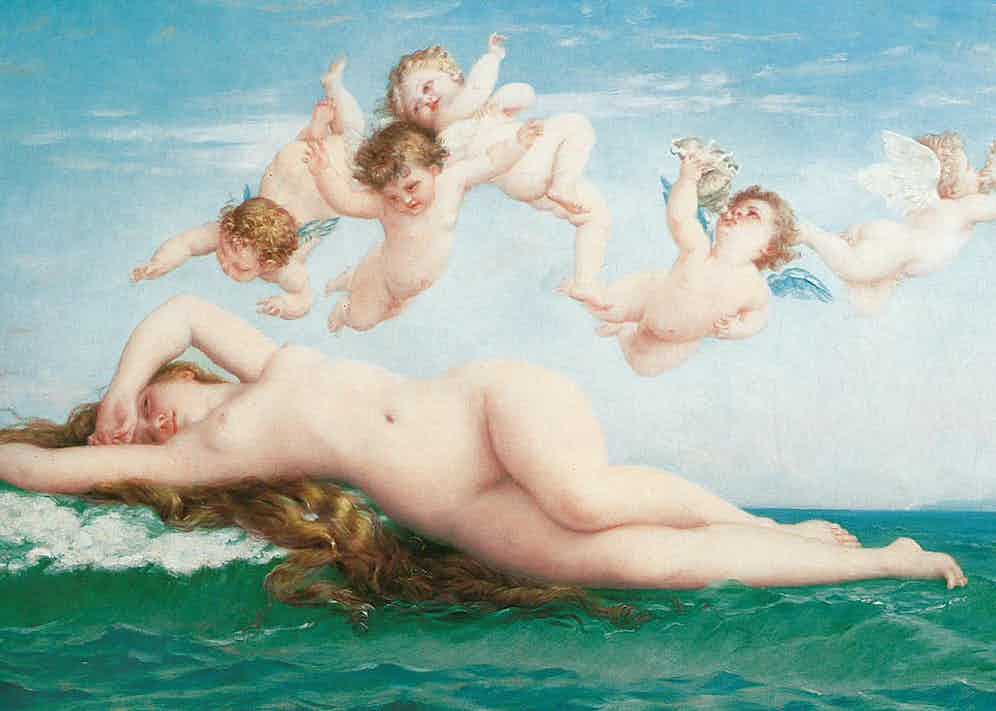 For those whose prism is resolutely contemporary, the era before the 20th century seems - in the arts, at least - to have been high-minded, staid, serious and not at all as interesting as the racy and profane era that followed. Yet the arts have always reflected - nay, nurtured - the deeply human erotic instinct that leads to survival and reproduction of the species. In fact, eroticism in art before the 20th century was so pervasive that there is no single specialist at Sotheby's who deals with it, for it has appeared in whatever form art has taken: paintings, sculpture, drawings, book illustration, even timepieces. Art has always existed to tell a human story, and sex has always been a part of that story.

Consider what really drew the respectable bourgeois of Victorian England or the Second French Empire to the Royal Academy or the Salon on a Sunday afternoon: in an age in which women of virtually any social class were covered in clothes of all description up to the neck and down to the floor, the category of 'allegorical' painting or mythological subject matter allowed masters such as William Bouguereau to titillate his audiences with acres of naked, rubicund, perfectly formed female flesh. From chaste goddesses flaunting their perfection to nymphs looking the viewer straight in the eye, the erotic charge is palpable.

In Victorian Britain, pictures such as Andromeda by Sir Edward John Poynter, Venus Verticordia by Dante Gabriel Rossetti and Venus Disrobing for the Bath by Frederic Lord Leighton were erotic classics that were shocking in their day. In the case of Andromeda, the artist was using a classical excuse to present nudity and seems to revel in the more titillating aspects, notably presenting her entirely nude with the suggestion of ecstasy at her bondage. We find her chained to the rocks waiting to be rescued by Perseus from the sea monster, according to the mythological tale, which alone made the shocking image palatable to a staid British audience. I'm reliably informed that there was no specification in the myth that Andromeda was naked at the time of her dilemma, but perhaps Poynter believed, as Oscar Wilde did, that 'to be really Greek one should have no clothes'.

At least Andromeda has a fully developed classical narrative behind it. Leighton's Venus Disrobing for the Bath is simply a putative goddess in the form of a woman taking her clothes off for the viewer, who then becomes a voyeur spying on her. Is this Victorian high classicism or pandering to a baser instinct? Venus Verticordia was Rossetti's most erotic and explicit picture, complemented by symbols indicating fullness and ripeness - including the golden apple (or apple of discord), the symbol of temptation associated with Helen of Troy, the star of one of the most controversial sex scandals in history, which saw the two most powerful nations on earth go to war over who would bed a woman.

Rossetti's conceit was that Venus Verticordia had the power to turn men's minds and hearts from chastity. The picture is calculated to make Venus's male viewers feel aroused, which showed they'd taken in the meaning of the history lesson, after all. Rossetti shocked even further by putting a halo around her head, the link with the Madonna essentially glorifying sin and lust. It's noteworthy that a pillar of Victorian society, William Graham, MP for Glasgow, commissioned both the oil and watercolour versions, no doubt so that he could be edified in private by Venus's charms. It's not surprising that appetite for such material was vociferous at a time when an exposed piano leg was deemed improper due to its potential to titillate.

Lest anyone think our forebears gave no thought to such matters, according to the Classical Canon of Art developed by the French Academy in the 17th century, the highest place in artistic production was occupied by figural history painting (in which the mythological nude was writ large), followed by portraiture, still life, landscape and genre painting. The human figure was considered among the hardest subjects to depict, and the process by which students acquired the requisite skill to do so was regulated by a rigidly controlled process, which began with copying from the antique. The student who reached the pinnacle of success would be awarded the Prix de Rome. Successful academicians exhibited at the Salon. 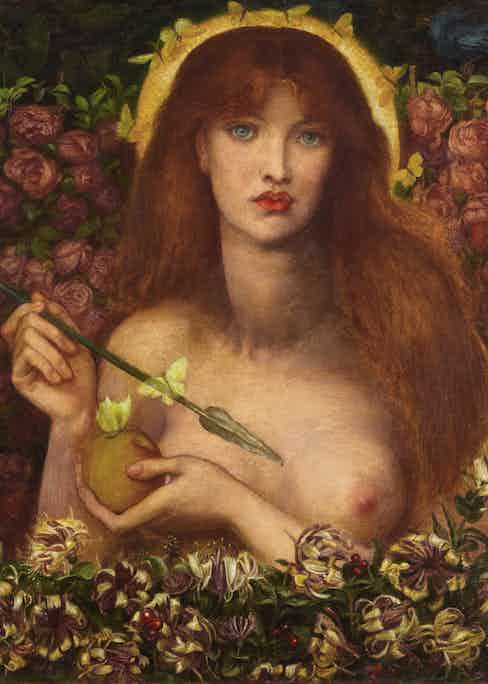 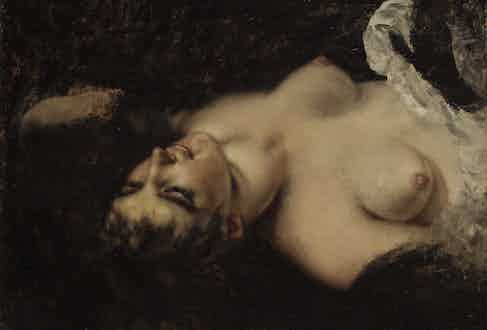 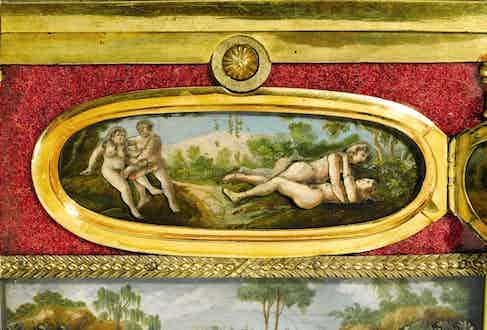 The same year, the radical proto-impressionist painter Edouard Manet rebelled against this neo-classical-idealising art and intentionally produced an image of a woman who was not nude, but - horror of horrors - 'naked'. His epoch-making Olympia makes reference to a landmark Renaissance nude in its depiction of a prostitute. The great Realist painter Gustave Courbet took this even further in paintings such as his Femme nue, created three years later, which depicts a woman flat on her back quite clearly in the throes of sexual satisfaction.

Courbet's success with Femme nue encouraged him to go further, to depict parts even more central to womanly attributes. His L'Origine du monde, a loving depiction of the female genitalia, attracted wide attention in its day, and has not lost its ability to shock. At an exhibition at New York's Metropolitan Museum of Art just over 10 years ago, it was exhibited in darkness, in isolation from the main exhibition, which gave the impression of a peep show. The painting's first owner was Khalil Bey, a Turkish 19th century collector who was an avid lover of racy French pictures. He concealed the painting behind an innocuous winter landscape by Courbet, which he would delight in sliding away to reveal what lay beneath.

But because the art of Courbet and Manet was a rebellion against the French Academy, it was not allowed to pollute the sacred precincts of the Salon, and was instead exhibited by default at the Salon des Refusés, which attracted a distinctly more Bohemian crowd. My colleague Adrian Biddell, who is Head of 19th Century European Art, tells me that the same gentlemen of the haute bourgeoisie who took their wives and families to a picture show at the Salon on a Sunday afternoon might take their mistresses to the Salon des Refusés in the evening.

Roll back to the 16th century and consider the book connoisseur, holed up in his library for hours. Was he contemplating the breakdown of Aristotelian Cosmology, as seen in the works of Copernicus? While printing began in the 15th century, most books printed before 1500 were for serious study or institutional use. However, at the start of the 16th century, private, personal reading for leisure really took off and printers used the new technology to cater to this need by producing books in smaller formats.

Printing was a clear threat to orthodoxy, as widely distributed books meant that people could think for themselves, a notion that the prevailing authorities feared as potentially heralding the end of civilisation as they knew it. This was an era, after all, in which Martin Luther had nailed his Ninety-Five Theses to the door of Wittenberg Cathedral in 1517, unequivocally challenging practices of the Roman Catholic hierarchy. 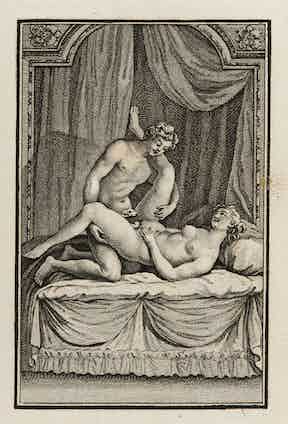 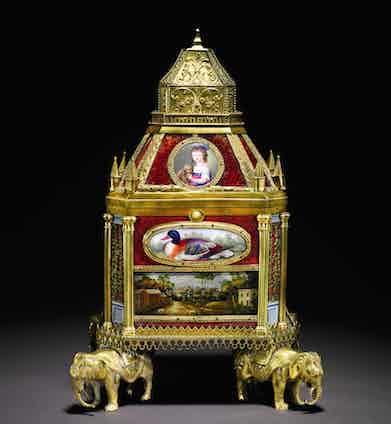 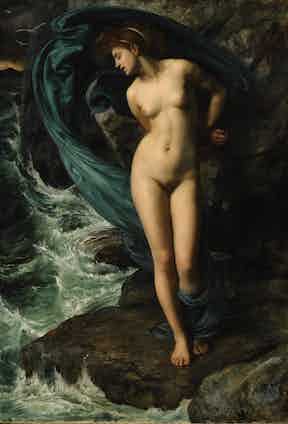 The core of European printing in the period lay in Venice, and Pietro Aretino (1492-1556), whose legacy includes the title of Europe's first pornographer, chose to settle in the city he deemed 'the seat of all vices'. Notorious as a satirist of those in power, Aretino earned the title 'Scourge of Princes'. However, it is for his licentious titles that he merits note here. His profane texts include La Puttana Errante(The Errant Prostitute), the first literary work to focus on the subject of carnal gratification. His notoriously coarse poems known as The Postures, which accompanied pornographic drawings by Raphael pupil Giulio Romano, were a shocking and obscene early guide to fornication (not even the hint of a mythological or moral pretext to be found here). So influential were these erotic explorations that the French author François-Félix Nogaret even penned L'Arétin Français, a witty French equivalent to Aretino and Romano's guide to sex.

In the 17th century, the notorious English libertine John Wilmot, 2nd Earl of Rochester (1647-80), the chief wit at the Royal court of Charles II, was an embodiment of riotous immorality. Wilmot's play Sodomis believed to be the rarest piece of early English pornography on record. Its plotline is that, bored by the 'drudgery' of normal sex, the King of Sodom decides to 'set the nation free' by allowing 'buggary' to be 'us'd thro' all the land'. What follows is outrageously X-rated in every single line, satirising the state of moral and sexual anarchy post-Restoration. Johnny Depp gave a swash buckling performance as the legendary rake in the 2004 film The Libertine, which is sure to appeal to the historically minded. (See page 112 for more on the 2nd Earl of Rochester.)

But if our bourgeois gentlemen couldn't wait until Sunday for their fix of flesh, they could always take out their pocket watches and, hiding behind an appreciation of 'craftsmanship', enjoy a more private moment with the graphic, if rudimentary, scenes of copulation (or sometimes something more kinky) played out on the hour for their personal delectation. Erotic automatons are often hidden behind decorative touches such as classical vases or flowers surrounding a watch dial, while the carnal depictions would be revealed with a press of the 'pusher' within the watch stem. Large numbers of these were made throughout the 19th century, the majority originating from Switzerland. Competition for these in the saleroom can be intense, especially with the entry of Asian clients into this marketplace: these watches, after all, speak a universal language. 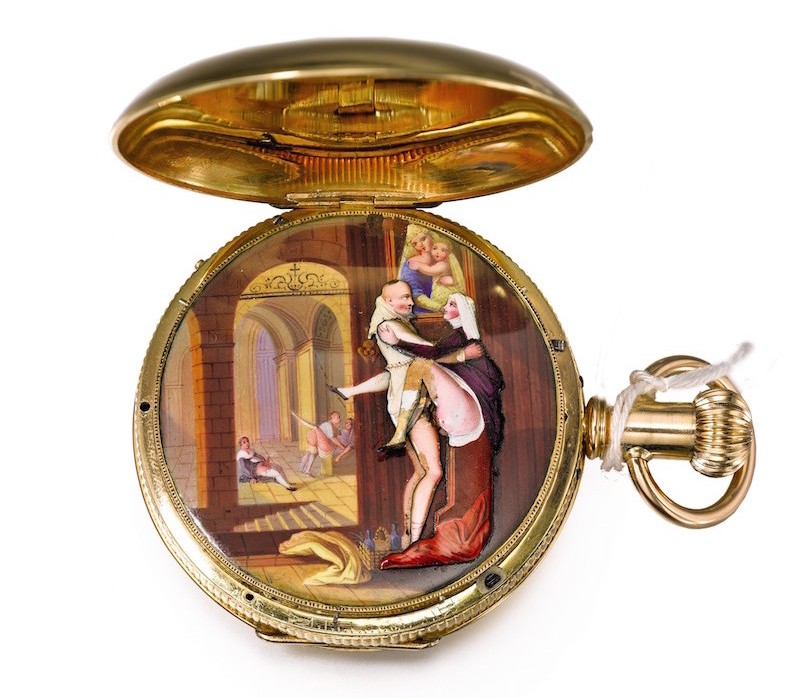