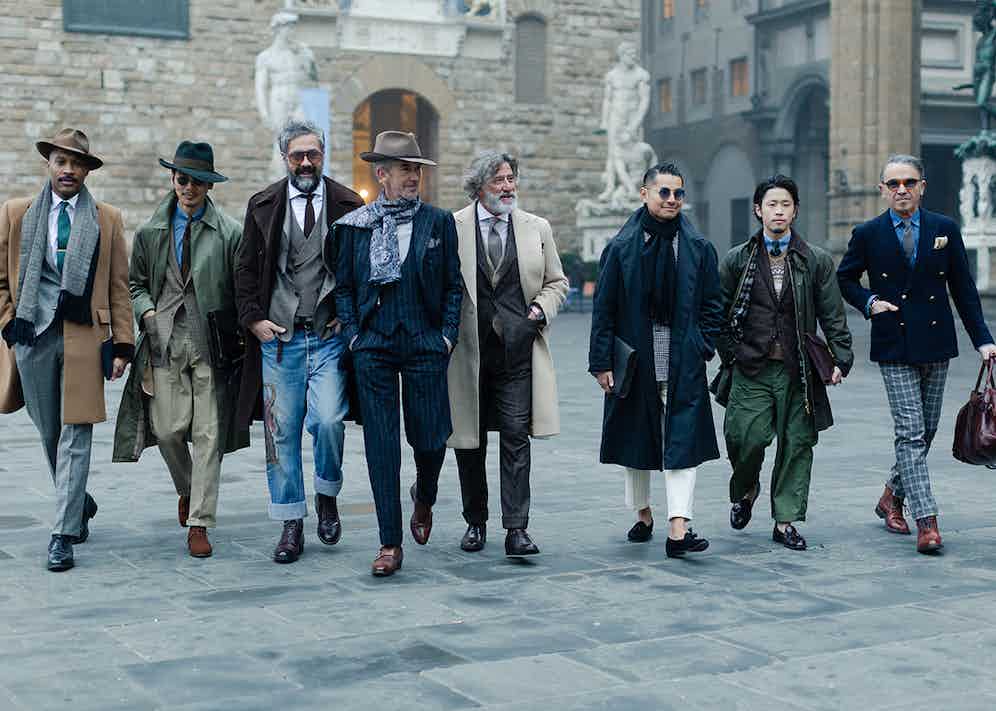 From left to right:Shaun Gordon (@shaungordontiemaker); Shuhei Nishiguchi (@shuhei_nishiguchi); Daniele Biagioli (@_____db_____); Guillaume Bo (@gui_bo); Franco Mazzetti (@franz_1955); Tomoyoshi Takada (@tomoyoshi_takada); Serizawa Ryosuke (serizawa_ryosuke); Filippo Matera (@filippomatera).
At Pitti Uomo in January this year, photographer Charles-Edouard Woisselin ( dgephoto.com @desgensenphoto) got to thinking about streetstyle. This genre of photography, which has become increasingly popular with the advent of social media, is nothing new. In fact, some of the earliest recorded photographs ever taken could feasibly be described as 'streetstyle' given that they documented people literally on the street. As far back as the early 19th century, the likes of Louis-Jacques-Mandé Daguerre, John Thomson and Charles Nègre were documenting people in the street, although admittedly not with the eyes of the late Bill Cunningham. But with the modern proliferation of the camera, and the obsessive nature with which people consume social media, streetstyle photography has become an important medium for stylistic inspiration, as evidenced by the now much maligned 'influencer'. The early days of instagram, before its mass commercialisation, did indeed allow for the genuinely stylish to showcase their taste, making it a fantastically diverse compendium of styling ideas, if you knew where to look. Today, it has become something of an echo chamber for the gloriously self-infatuated, and when you throw in brand endorsements, paid posts and gifting, it soon becomes clear that true style, the subject of Charles-Edouard Woisselin's photographic project in Pitti, is a scarce commodity...
"I've been thinking a lot lately about Street Style during fashion events and fairs, Pitti Uomo in particular. To me there is no doubt that street style changed the industry, the way we see clothes and in the case of Pitti Uomo, the way we perceive elegance. But although pictures and photographers have evolved, street style during Pitti Uomo is still pretty basic. You have your picture taken at the entrance, then inside the Fortezza da Basso, and then sometimes on your way out, maybe in a street adjacent to the fair. That's pretty much it. As more and more people come to the fair - both attendants and photographers - it's getting harder and harder to get those clean pictures. And so, my frustration with street style grew. I began thinking about the absurdity around Pitti Uomo and the fact that we are in a city that is undoubtedly one of the most remarkable in Europe, and probably the world, and yet have very few street style pictures in that city. I wanted to show that. I wanted to put back the street in street style."
"So I began reaching out to the gentlemen I like most, those who I feel have a natural way of dressing elegantly. Together with my friend and fellow French citizen, Guillaume Bo (@gui_bo), a very elegant man himself (pictured above in the navy suit), we began asking the guys whom we thought were the most elegant, most interesting and representative of timeless sophistication. These guys are the essence of what Pitti Uomo can be: a coming together of the best-dressed men in the world. Style is the unifying force between them."
"Then of course there is the city of Florence. For that rendez-vous,we decided to meet near the Ponte Vecchio at 8am. The date and hour were decided a long time in advance so no one could have foreseen that the fog would be that thick on the Wednesday morning. After wandering in little typical streets, we ended up on the Piazza della Signoria where we shared the place with the Davideand some tourists. After that we went to have a drink at the Wine & Art Hotel near the Duomo and enjoyed the fog from upstairs. There we shared a cigar and discussed the state of style in the world. I like to believe that my inspiration draws mainly from cinema. To me, that setting was just a dream come true. I believed then and still strongly believe that style deserves a different perspective. I understand that taking pictures inside the Fortezza is the essence of our jobs, I still do them myself. But I think that it's a shame not to be able to enjoy the beautiful city of Florence more than that."