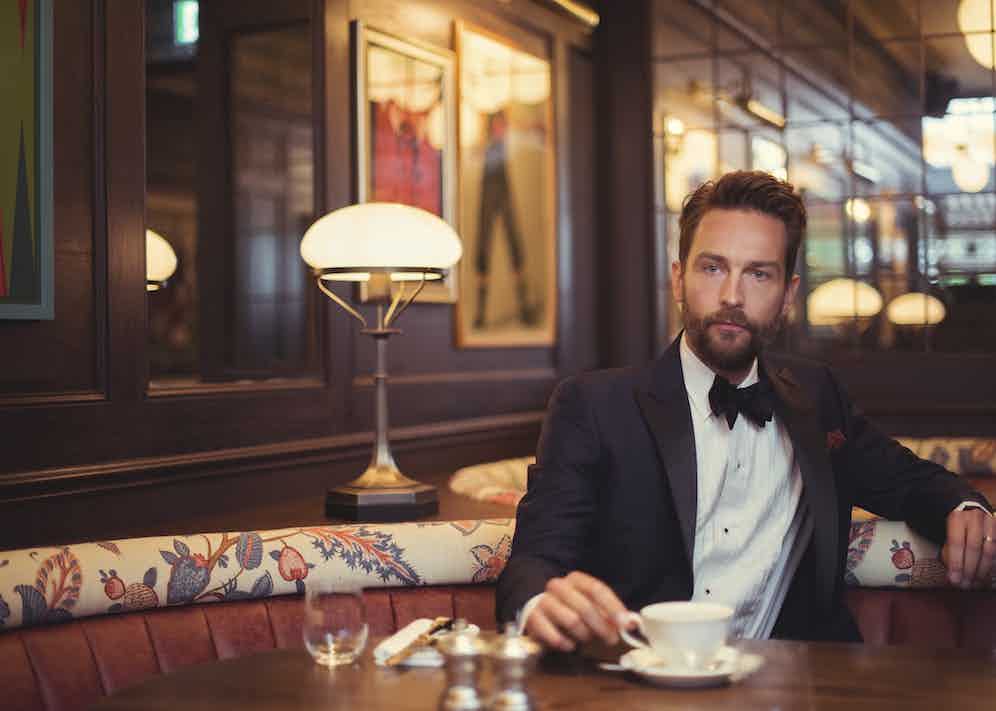 Nice guys are meant to finish last, but it doesn’t seem to be impeding Tom Mison, who is about as charming as they come. Onscreen, and in photographs, his cheekbones and high forehead give him a kind of aristocratic hauteur, so it is disappointing to report no evidence of this in person. I arrive early for our interview, just as he is finishing the photoshoot at the back of Moncks of Dover Street in Mayfair, a smart new brasserie on the site of the much-loved Automat. Everyone is grinning happily: the photographer, stylists, assistants, waiters. We shake hands and Tom immediately starts stripping to his pants. I try to offer him some privacy, but he insists I stay. Changed into the actor’s standard mufti of black trousers, black T-shirt and jaunty trainers, and safely installed in a booth, he checks the sun is over the yardarm before suggesting a glass of wine.

Others have had more meteoric rises to the first rank of British acting, but few ascents have been as steady. After being booted out of drama school, Mison (which rhymes with bison) was plucked by Sir Trevor Nunn to play Fortinbras alongside Ben Whishaw’s Hamlet at the Old Vic, a production that dragged the Dane moping and skulking into the 21st century. After that, Mison enjoyed a starring turn in Posh, Laura Wade’s play inspired by the Bullingdon Club, which raised the temperature of the Royal Court theatre around the time of the 2010 general election in Britain. Soon the call from America came, and Mison was cast as Ichabod Crane, the lead in Fox’s Sleepy Hollow, which ran for four series. He is about to return to the small screen in HBO’s Watchmen, a hugely anticipated adaptation of Alan Moore’s graphic novel, about which he is able to say almost nothing.

Were there any theatrics in the family?

I grew up in Woking, in the ’burbs. Most people stay put. The main advantage of the place is that it’s ‘near London’. I could never understand why you wouldn’t just be in the cool place itself, rather than only going up to see slaggy West End plays and coming back again. My great-great aunt was a singer, part of Fred Karno’s troupe. There’s a picture of her with the company on the boat to New York in 1910. On one side of her is Charlie Chaplin, on the other Stan Laurel. And my parents met in amateur dramatics, in a production of Spring and Port Wine. When I was kicking my heels as a teenager, someone suggested I go and do that. When someone told me you could get paid for it, my childhood dreams of working in the zoo were shattered. 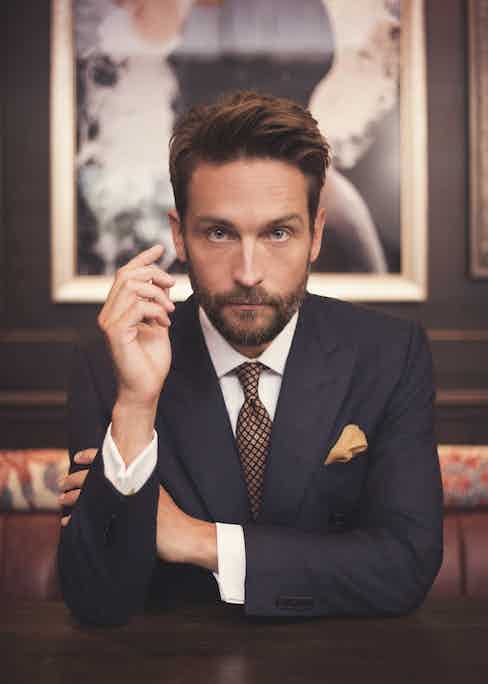 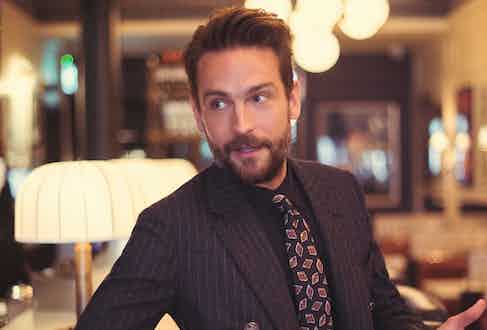 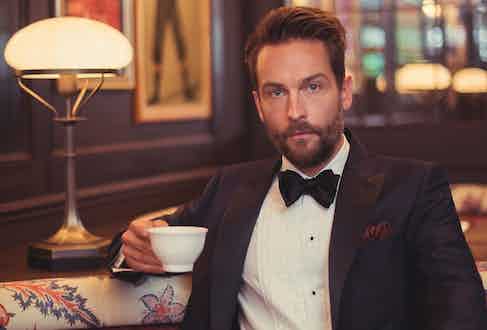 So it wasn’t a huge act of rebellion for you?

I know my dad had visions of me going off to Oxbridge and playing in the Varsity match and becoming a lawyer, but I think they knew that I’ve never been very good at focusing on things I don’t like. It’s the reason I got kicked out of drama school. You can see it in a lot of my early work, when I took jobs because there was rent that had to be paid. I’m terrible in them. The sad thing for my generation is that there’s no longer rep theatre, where you could go off and spend a year in Lyme Regis and do loads of different plays. Now we have to cut our teeth on bad T.V. detective shows where you’re only on for a few days, don’t learn much and then wonder when you’re going to meet Daniel Day-Lewis. It’s the Malcolm Gladwell rule of needing 10,000 hours’ practice to become an expert. You can have many more hours in a three-month theatre run than if you’re doing Poirot. Not that I’m knocking Poirot. Chin-chin.

Why did you get kicked out of drama school [The Webber Douglas Academy]?
Some of what you learn there is valuable, but other things are ridiculous, like the stuff where you lie down and make humming noises and picture colours to influence the character. It was too much for me. There was too much giggling and rolling about. Luckily Trevor Nunn didn’t mind, and he whisked me up and threw me into the Old Vic [to do Hamlet]. My next job after that was a really terrible film for T.V. with Sir Patrick Stewart [Mysterious Island], and he had only one question about Hamlet: “Was Ben’s [Whishaw] snot on stage real?” Those are the kinds of important questions you get from our knights and dames.

One of your other big breaks was Posh, which seemed political in 2010 but perhaps even more so now, with Boris Johnson as prime minister.
I loved that play. Plus, I met my wife [Charlotte Coy] there. She was the sister of one of the cast members. I’m sure there’re rules about that. But it was just 10 boys sitting around and getting pissed every night. Very early on, Lyndsey [Turner, the director] said, “Don’t just stick to the script”. She encouraged us to piss about. It was disastrous, but it’s probably the most unprofessional job I’ve worked on, as well as the most fun. The Royal Court had told Laura Wade and [Lyndsey] to go all out to create something on privilege and entitlement. It was during the run-up to the 2010 election, with [David] Cameron and [George] Osborne, who had both been in the Bullingdon, and Boris was mayor of London. We put on a play and it changed the political spectrum as only theatre can… No, everyone ignored it and voted for them anyway.

Read the full interview with Tom Mison in Issue 66 of The Rake – on newsstands now or available here. 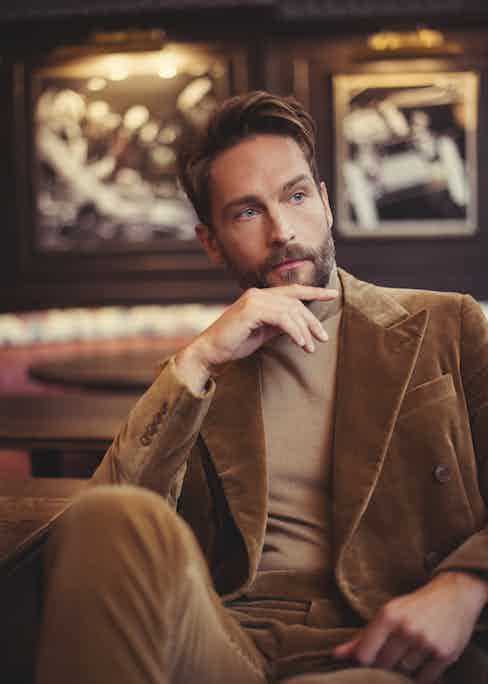 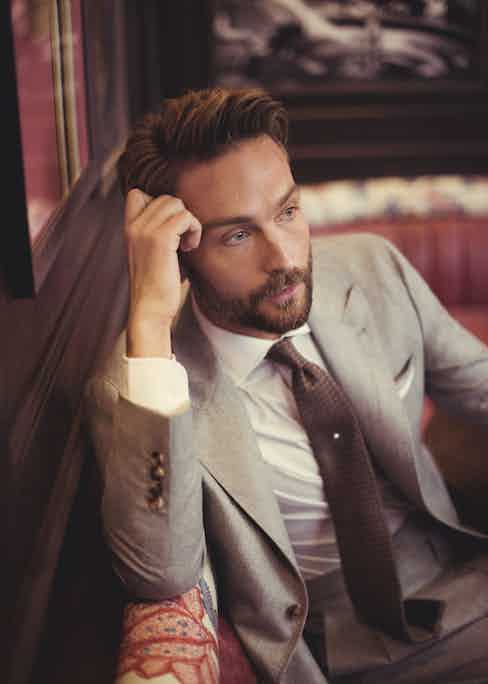