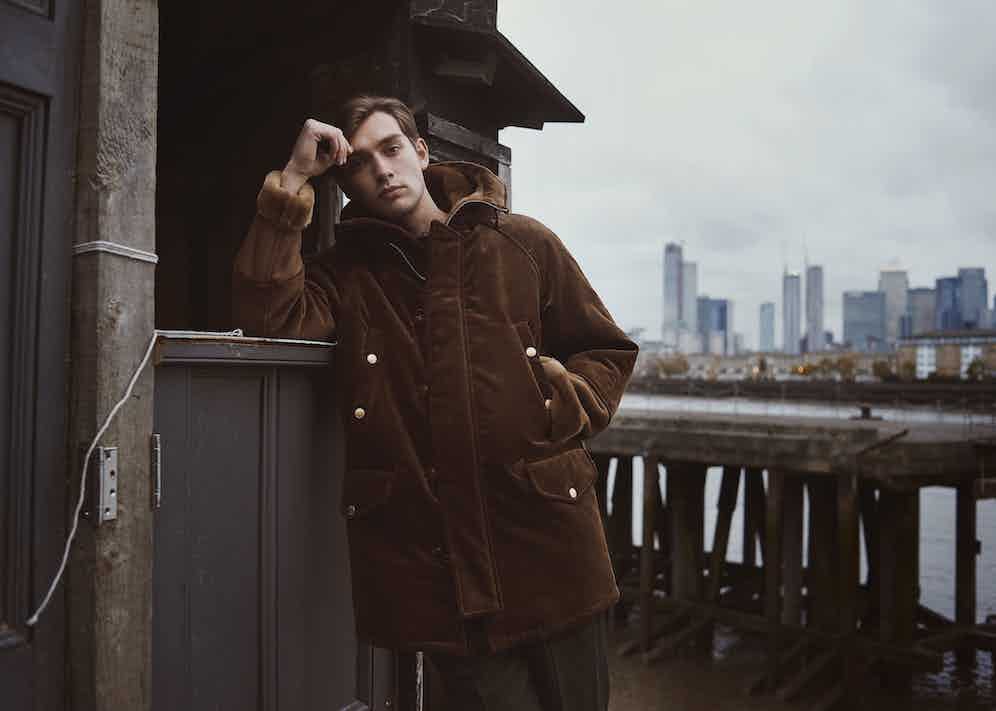 Christian Barker’s recent piece Man of the Cloth which appeared on this website spoke in eloquent detail about medical missionary Sir Wilfred Thomason Grenfell’s search for a fabric that could withstand the extreme conditions he’d encountered on his expeditions to help the needy folk of the Labrador Coast, Newfoundland. After a chance encounter at a talk, where Grenfell himself, as chief speaker, threw down the gauntlet to the local weaving community, the wonder cloth as it became known was eventually woven at Lodge Mill in Burnley by Walter Haythornthwaite. He was struck by Dr Grenfell’s words, “that you could not keep a statue warm by putting a fur coat on it; clothing must be windproof but also must breathe.” He gladly accepted the challenge and invented a fabric dense enough to repel the elements, whilst being permeable to perspiration.

“Grenfell cloth exploded on to the scene when it first became available to the general public in 1923,” says Grenfell Managing Director Mo Azam as he talks me through the company’s 96-year evolution, referencing a wall-mounted timeline featuring a succession of black and white imagery held in the archive section of their manufacturing facility, a former Metropolitan Police forensics laboratory, in London’s E17.

“It quickly became the fabric of choice”, reveals Azam, “rather like a Gore-Tex of its day – it was a new way to weave cotton. It was technical, lightweight, weatherproof and ultimately very breathable.” It became the go-to cloth for a whole host of leading figures of the great outdoors – indeed, Grenfell’s archives read rather like a who's who of brand ambassadorships, long before the term had even been coined: In 1926 American naval officer and explorer Admiral Byrd embarked on a mission to fly over the North Pole in a Grenfell Cloth flying suit. It lasted fifteen hours and fifty-seven minutes, covering 1,335 nautical miles, with Byrd remarking that his suit was the finest cloth he had found for his escapades; British racing motorist Sir Malcolm Campbell who broke the land and waterspeed record in the same year, 1964 - did so wearing Grenfell cloth racing suits while American aviation pioneer Amelia Earhart was attired in a Grenfell flying suit when she became the first female pilot to fly solo across the Atlantic Ocean in 1928. 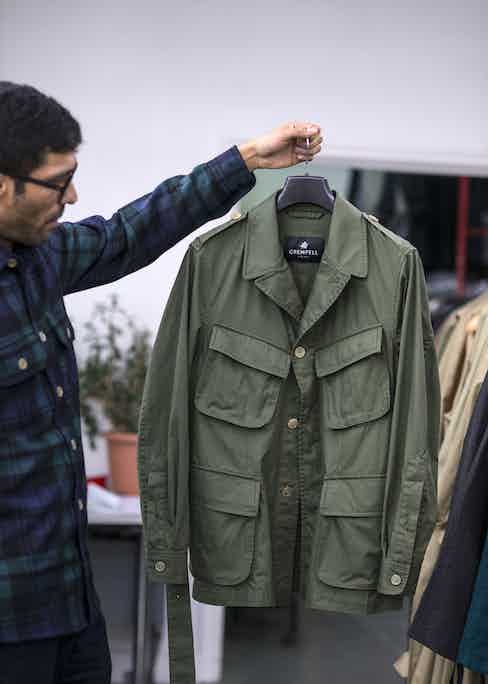 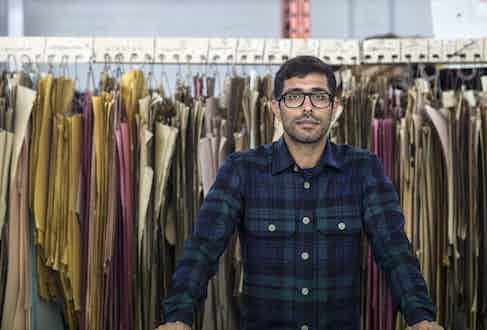 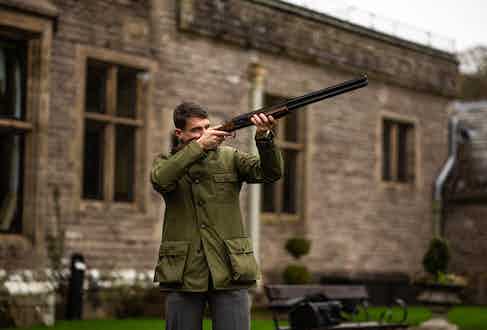 The fabric was so successful that the early founders of the brand decided to start making outerwear for general sale in the form of rain coats, trench coats and golfing jackets in 1930. They were super popular not only to punters but they became the focus of nigh on every mountaineering expedition and record-breaking attempt there was. You name it, Grenfell cloth probably enveloped it, whether it was a tent such as those used in the 1932 Everest Expedition where the fabric reigned supreme at basecamp; or Sir Henry Cotton, the leading golfer of his generation winning The Open Championship in 1937; or British Army and Royal Air Force officers during the Second World War. “I’ve even read online that the original Mae West life jackets made for this conflict were constructed out of Grenfell cloth,” says Azzam proudly. The iconic vests, which could inflate in seconds, were said to resemble the generous bosom of the American actress and sex symbol, when fully inflated.

When Sir Edmund Hillary and Sherpa Tenzing reached the summit of Everest in 1953 they were both wearing Grenfell cloth; “Gregory Peck wore our Walker jacket down the Cresta Run in St Moritz, too” adds Azzam, “and there’s Sir Sterling Moss in his Grenfell Racing suit when he won the Mille Miglia in Italy, not to mention members of The Royal Family, too.” I ask about the feasibility of Grenfell’s Royal Warrant being reinstated (after initially having it bestowed on the brand in 1958), and Mo tells me he’s working hard to achieve just that. Glancing further along the timeline we spy American actor and style icon Carry Grant wearing a Grenfell Campbell raincoat, but, “this is one of my favourites” says Azzam, pointing to a picture of Sir David Attenborough wearing a Grenfell Walker Jacket when he first encountered gorillas in the BBC documentary Life on Earth in 1978 – a pivotal moment in history. It was the first time anyone had ever captured them on these natives of the forest-clad slopes of the Virunga Volcanoes, in Rwanda, on camera, let alone get up close and personal with them.

In the 1980s Grenfell was sold to a Japanese company who subsequently held the brand dormant. “That’s when they approached my Dad,” says Azzam. “He’s had clothing factories specialising in luxury outerwear in London since 1984. His first clients were Katharine Hamnett and the late Joe Casely-Hayford – my Dad was responsible for his first collection produced out of the factory he used to have in Whitechapel. But he soon outgrew it and moved to bigger premises in Bow. This is when we started to make coats for Burberry, Aquascutum and Daks,” adds Azzam. “We were producing 400 coats per week for Burberry and 200 each for Aquascutum and Daks.” 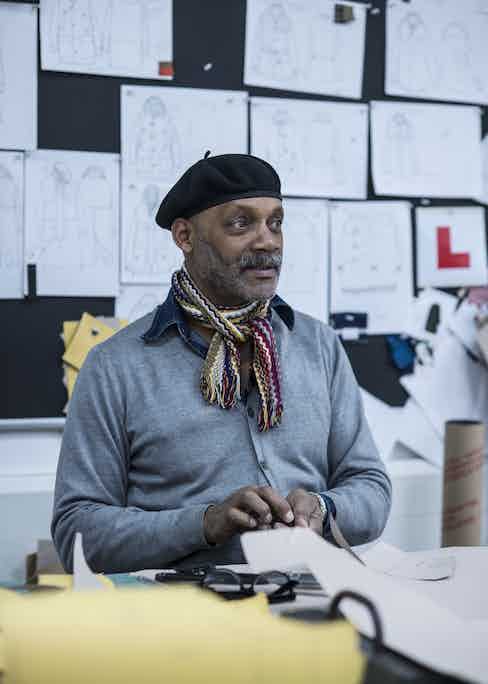 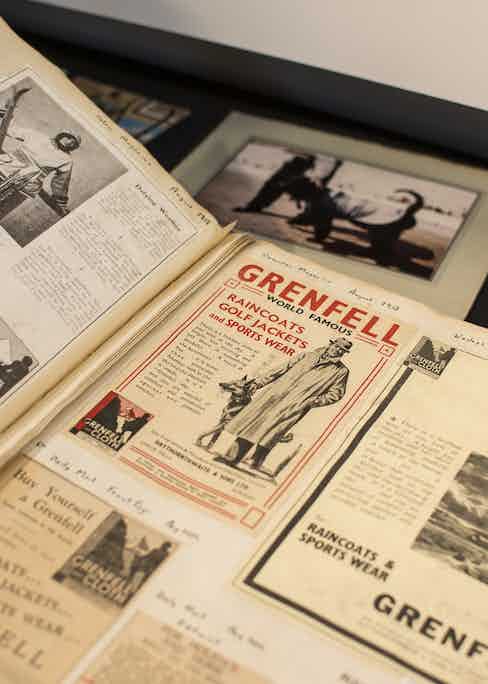 “The Japanese owners of Grenfell heard about my Dad’s reputation and the fact that he’d established some very successful outerwear factories. In the late 1990s when brands were starting to move their manufacturing to the Far East, around Europe, a lot of factories in the UK were closing their doors because there was no longer enough work. But Dad didn’t want to close down, he’d built up a such a good team, such a nice factory,” continues Azam.

Initially the Japanese owners wanted to offer Azam senior a UK license – but, says Mo, “my Dad is such a good negotiator that he ended up buying the whole brand back from them and returning it to the UK once more.” He started with zero turnover, but insisted it was his own little project that he wanted to revive. Initially he didn’t update the styles, concentrating instead on the classic, more traditional fits. Back then it was all very oversized, but there’s still a big market for that. Me and my brother came on board seven or eight years ago, and four or five years later we relaunched the brand and hired former Hardy Amies and Aquascutum alumni Joslyn Clarke as our new Head of Design – that’s when we moved to this factory in Lea Bridge.

“The whole purpose of the relaunch was to freshen up the brand, take all the classic styles and just update them in terms of fits, trims and materials.” But Azam was conscious not to detract too much from the original design and style of the garments: “Our brand is known for these iconic styles, so, unequivocally we’ve kept all the classic elements. As The Rake themselves say, we like to refer to our products as ‘modern classics.'” Azam is keen to point out that Grenfell still do offer the classic fits, even more so now that the likes of Burberry, Aquascutum and Daks have stopped making them. “There are still so many high end independent older gentleman’s stores out there in Europe and the States that still demand the classic styles.” He reveals that he’s even encountered some of the more contemporary stores requesting them once again, what with the recent revival for oversized garments. 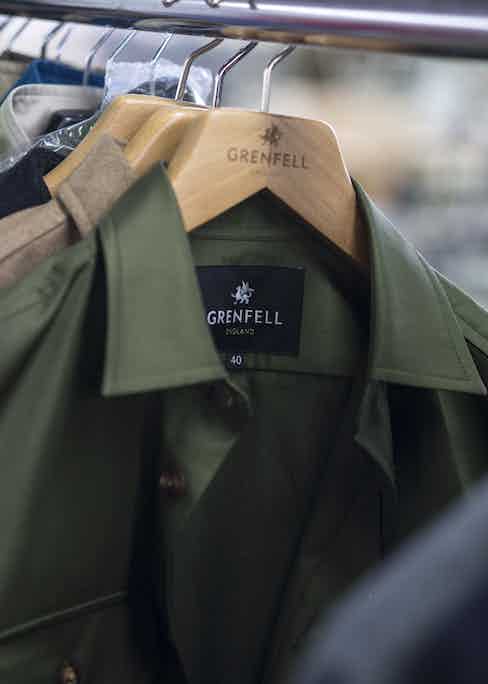 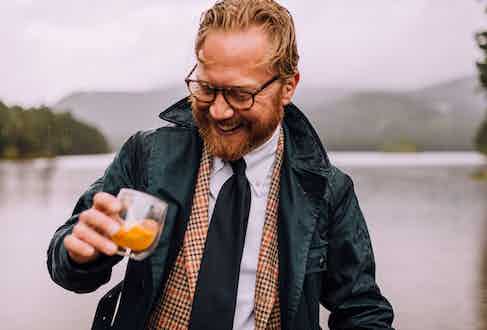 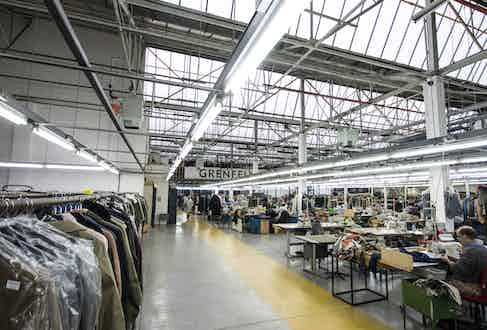 As well as a handsome collection of archival pieces which hang spotlit adjacent to us, Azam has acquired some great hard copy ephemera too: “I’ve a pretty cool story actually. We were contacted by a lady on Facebook two years ago”. It turned out she was from New York and whilst clearing out her Great Grandfather’s attic, had stumbled upon a book containing all manner of Grenfell branding. “She said, I think you should have the book. So she sent about five pictures across to show us what was contained within it, and I said to my Dad, we just HAVE to get hold of this book – it’s like gold dust, it’s like treasure for us. So we initially contacted her to say we’d be happy to part with $500 in exchange for the whole book - only to be met with a quickfire retort implying that one image alone would surely be worth $500! So we were thinking, this book is going to cost us the earth. But anyway, we left it a few days to reflect, thankfully in the meantime she got back in touch and said, look, I’ve been having a rethink, it’s no use to me and I’m happy to let you have for it $500.”

When the grand annal finally arrived it was every bit the piece of treasure Azam had envisioned, and more. As each page was opened and subsequently turned, concertinas unfurled, brimming with all manner of archive photography, brand guidelines, fabric swatches, a whole back catalogue of beautifully woven original Grenfell labels, gummed in with such precision, shoulder-to-shoulder, with exquisite Mount Rushmore-esque chiselled detailing of the brand’s iconic mountain insignia - revealing the shadows of each crevasse in unbridled glory. Some even specifically annotated with red directional arrows, in case it wasn’t clear enough, which read “IMPORTANT: When wet, dry by a fire.” One can only imagine the commotion such an instruction would cause nowadays with the health and safety police. You name it, it was contained within this vast treasure-trove-like tome. Everywhere Grenfell cloth had ever been used was meticulously chronicled – original photographs such as those capturing the highest altitude any tent had ever been pitched; interspersed by page after page of clippings from newspaper and magazine advertisements.

It turns out the lady’s Great Grandfather was a gentleman named Alfred P Cook, who happened to be the Grenfell salesman for the United States, and this was the sales armour he would carry with him to tempt prospective buyers.

Mo breaks from leafing through the catalogue and pulls out a Grenfell Shooter – “one of our most famous jackets – it’s our best seller on The Rake, they keep selling out. It’s one of Prince Charles favourites too apparently,” he smiles. “Over the past two years I’ve been collecting archive pieces to build this collection – some bought in faraway places like Japan, some have turned up on ebay. Whenever I travel abroad I try and squeeze in visits to vintage stores. I’ve got some really cool pieces actually”. He shows me an Abercrombie trench which the company crafted back in the 1950s. “No one knows Abercrombie used to be a luxury mountaineering label back in the day – everyone thinks they’re a teenage kids brand”.

We walk across to another clothes rail, with Mo keen to show me some of the highlights from his collection. First up is a mountaineering suit, again made for Abercrombie & Fitch, It’s a jacket, gilet and trouser ensemble.” The parka came from Staten island flea market and eventually found its way on to ebay; the gilet is from Japan, and these to me look like they’re dead stock trousers – immaculate, never worn. It’s just awesome,” he beams. I concur and liken the finds to a jigsaw being pieced back together from multiple destinations around the world and being returned to its rightful

We leaf back through the concertina book one last time – it has a magnet-like effect of drawing you back. Mo says “there are several phases the brand has been through – but there’s one constant throughout and that’s mountaineering, hiking and the great outdoors. That’s what the brand has always been about even to this day. We always refer to this style bible. Joslyn and I are always delving in here - is there a piece we can recreate and bring it back that would work now? Our brand is all about authenticity though - we won’t just swap a random design in there, it has to relate to the brand's history at some point. I’ve been through the book hundreds of times, but I always discover something new every time.”