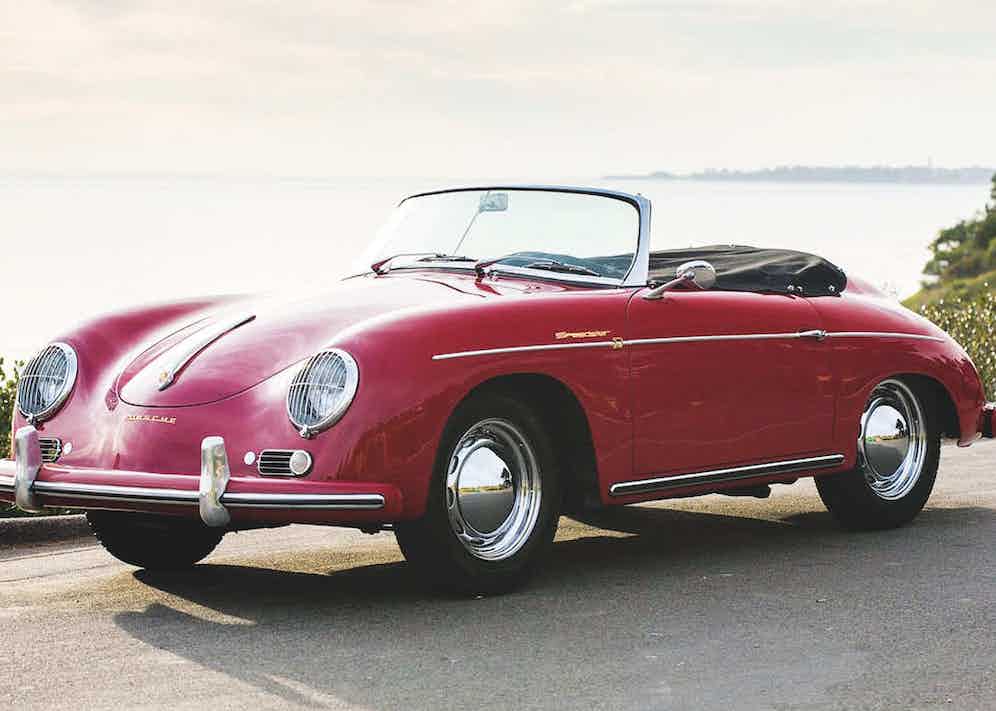 The Porsche 356 is a significant automobile not least because of its inherent beauty. It was also the first production model to hail from the German marque, laying the foundations for what would become the most successful sports car maker of all time. Yes, the 911 would go on to attain true ‘icon’ status among the all-time greats, but its predecessor, the 356, did much of the hard graft, giving Porsche the experience it needed in developing a mass-built car.

The 356 first took to the tarmac in 1948, three years after world war II and during a tricky period for the marque. Company founder Ferdinand Porsche had just been released after serving 22 months in prison for his association with Nazi Germany — he oversaw production of a number of German tanks during the war, and he also famously took on a commission from Hitler to design and build an affordable, simple road car for the mass market. The result was the Volkswagen Beetle, a car that the 356 is occasionally and unfairly compared to, yet it does share a number of attributes with ‘the people’s car’. Both have four cylinders, are air-cooled, rear-engined, rear-wheel-drive, and share comparatively curvaceous designs. The Porsche is an entirely different beast, though — it is the precise Sicilian fighting knife to the Beetle’s bread knife.

"It is the precise Sicilian fighting knife to the Beetle’s bread knife."

While Porsche Sr was in prison, his son, Ferdinand Anton Ernst ‘Ferry’ Porsche, created the 356 as he saw a gap in the market: “In the beginning I looked around and could not find the car I’d been dreaming of: a small, lightweight sports car that uses energy efficiently. So I decided to build it myself.” Indeed, the 356 was noted for its extremely light weight, coming in at between 800kg and 1000kg, which in turn helped give the car its famed handling abilities. It was never a hugely powerful car — the most potent engine in its lifetime produced 95bhp — but its dynamic abilities were virtually unmatched in the early fifties, meaning it was more than at home on the racetrack, a point proven by a victory in its class at the 1951 24 Hours of Le Mans. A white 356 Speedster was also the automobile of choice for a certain James Dean, who entered his car into his first ever road race, at Palm Springs in 1955, and won. Dean later traded that car in for the more powerful Porsche 550, the car affectionately known as ‘Little Bastard’, in which he fatally crashed, but the Speedster proved a reliable weapon for those first few races he entered.

The car you see here, and the one The Rake would recommend investing in, is the 356 Convertible D, easily the rarest of all the models created during the car’s 17-year production run. Manufactured by Karosseriewerk Drauz, the Convertible D was introduced in 1958 as an interim model before the 356 B Roadster came along in 1960, meaning there were just 1,331 examples in total. The 356 D maintained the much lauded Speedster-like styling, yet it boasted a number of differences that made it infinitely more refined, including wind-up windows, a taller, less angled windshield, a more practical soft top, and comfier leather seats suitable for long-distance cruising. Way more comfortable than the 356 A that came before it, and far rarer than the B that followed, the 356 D was a high point for Porsche’s inaugural model, and prices are reflecting that today. As far as investments go, this one’s a winner.