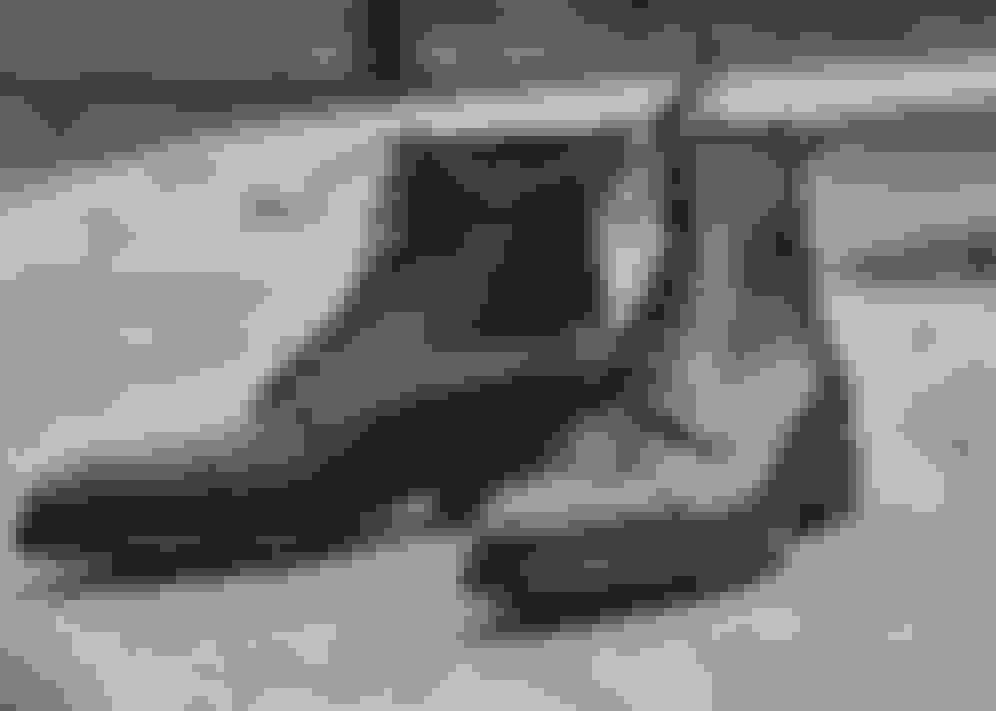 There is no rule that states you must wear boots come winter time, yet men’s style titles begin to dictate that you should as early as September. What are the benefits? Boots are arguably more practical than their vertically challenged counterparts – their height protects and offers support to the ankles; they’re often made from tougher, weather-resistant leather; and many are welted onto a rubber sole, giving extra reliable grip in wet weather. It is for their aesthetic properties, though, that many people chose to invest in them – as a Rake reader after all, chances are you are interested in style, and don’t require an extra few inches of ankle support or steel caps to protect your pedicured toes on the building site.

Boots come with connotations: military, biker, skinhead, musician, manual worker, ranch hand – all of which are pastimes that require some element of activity and as such, boots that are hard-wearing and robust. But they come in many forms, and can be as sharp a style as the most formal of shoes, yet with more presence – wear with tailoring and give your suit an instant edge à la Tommy Shelby. Whether you’re after a rough-and-ready workwear staple or a silky smooth dress boot, here are the styles you need on your radar for winter and beyond.

How do you define a Derby boot or shoe? Quite simply, its shoelace eyelets are stitched on top of the vamp. The Derby is the most common form of boot, with most classic shoemakers producing their own take. Amongst the most wearable style is the toe cap Derby (pictured), which is generally simple in design and features little to no broguing. Such a design wouldn’t be too different from those worn by soldiers in the British and US armies during WWII, especially if it features speed hooks, which supposedly allow for quicker lacing if you’re in a hurry. The style pictured is Carmina’s Jumper, which has been crafted on the brand’s Soller last giving it a rounded toe box and a slightly generous fit, befitting of designs from the 1940s, yet ideal for today. 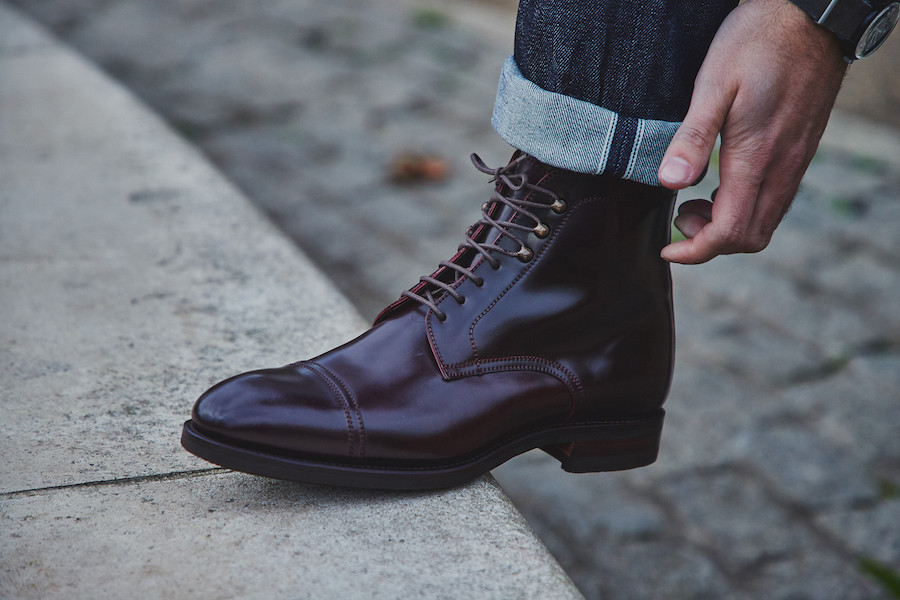 Unlike Derbies, Oxford shoes’ eyelets are stitched within the vamp, in line with early styles such as Balmoral boots that came to light in the Victorian era. Oxford boots are therefore more formal than Derbies, and will best pair with tailoring and smart trousers that are cut slightly short to best show off the high ankle. If you want maximum versatility out of an Oxford, there are some details that can offset some of the inherent formality of the style; double soles, storm welts, and rounder lasts. This pair from Berluti even features a side zip, which is relatively hidden when done up, yet makes the boots far easier to take on and off. 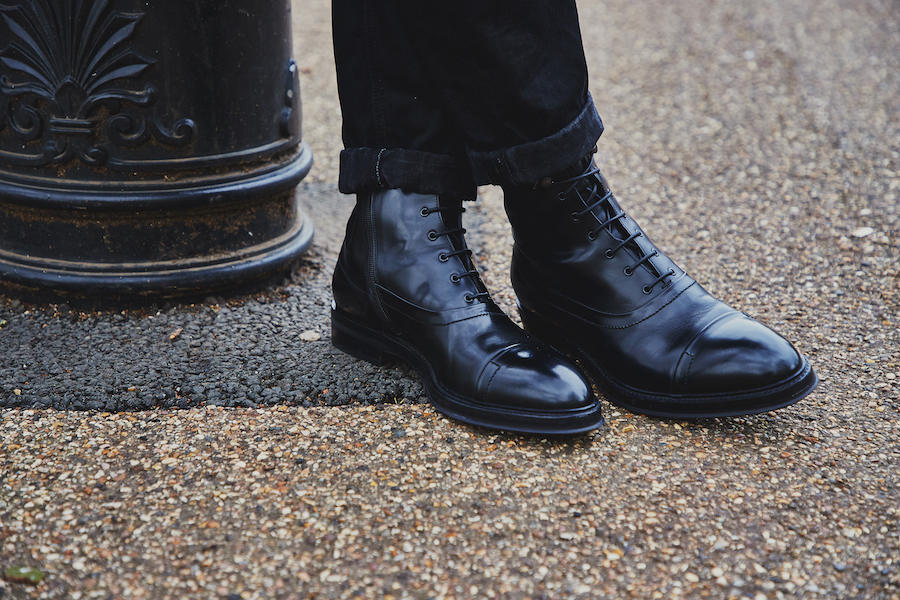 A good in-between boot is the Chelsea. Another style named after a location of England – this time the affluent area of west London which was said to give the style its name in the 1950s and '60s – the Chelsea is sleek, close-fitting and is defined by its elasticated side panel. It was said that Queen Victoria’s very own shoemaker originally created the design, which was favoured by the trendsetting monarch on long walks and horse rides, giving the style an early association with all things equestrian. The perception of Chelsea boots was forever altered, though, in the aforementioned post-WWII period, when London youths yearning for change saw their heroes wear them on stage: The Beatles, The Rolling Stones, Jimi Hendrix, Bob Dylan and many others took to the style. Today, the Chelsea is a versatile design that wears equally well with tailoring and casualwear. One of the finest iterations is made by Crockett & Jones; its Chelsea VIII in black leather is a handsome option, built as it is on the brand’s perfectly proportioned 341 last, which features a round yet still elegant toe shape. 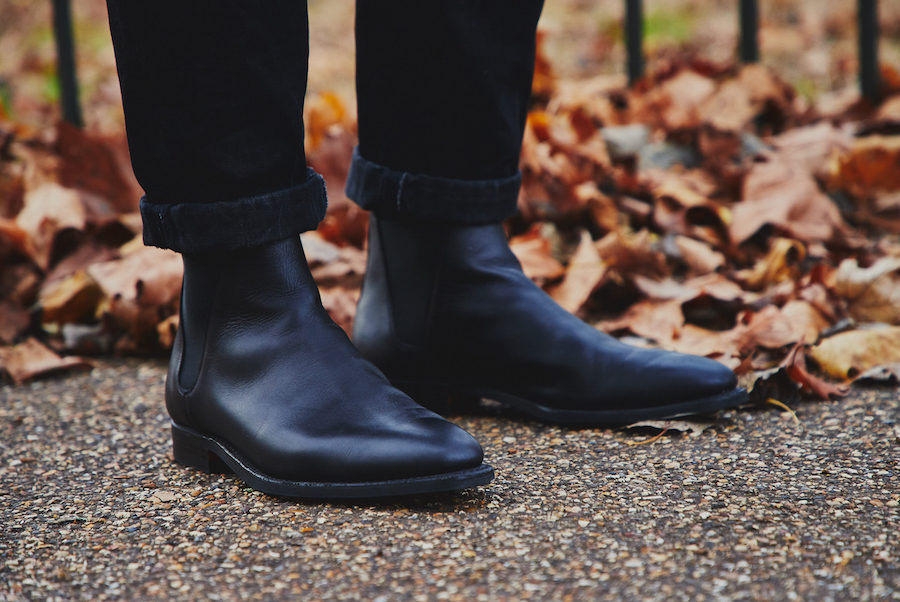 On the more casual end of the spectrum is the chukka boot. Usually made from unlined suede or soft, waxed leather, chukkas come on single leather or rubber soles – crepe soled versions are known as desert boots – and feature a maximum of three lacing eyelets. They’re an off duty staple, although despite many traditionalists telling you otherwise, chukka boots make an excellent accompaniment to tailoring. Ensure your trousers are cut slightly shorter than usual and with a taper so that the hems gently sit on top of them, rather than overwhelm them with unsightly folds of fabric. Italian shoemaker Stefano Bemer has created an exemplary version in suede complete with a lean, flowing silhouette, subtle leather piping on the two quarters and an almond-shaped toe. 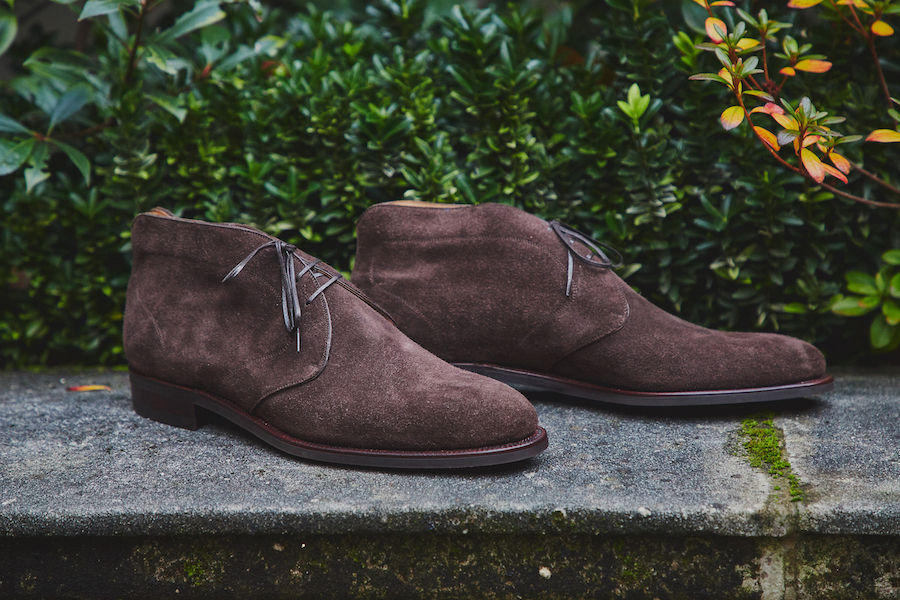 Fierce development and a need for hard-wearing, usable clothing ensured the Second World War gave birth to a number of well designed garments, many of which are still worn today. Whilst boots weren’t invented for the war effort, the fighting resulted in some developments on existing styles, which made military issued boots even more practical. One such change came about with the US Army’s introduction of the M-1943 Combat Boot, which featured large twin buckles at the ankle for added security and reassurance as trouser legs could be comfortably tucked in. Whilst hardly practical for everyday wear in this extreme form, British shoemaker Edward Green took inspiration from them with its Kentmere model, creating a more refined version complete with smaller buckles that offer a secure fit whilst protecting the laces at the top of the ankle. Crafted from Utah Delapré leather – with a soft waxed finish – the Kentmere comes with a storm welt and a chunky rubber sole, making them virtually indestructible. They'll pair best with denim jeans and an equally robust overcoat. 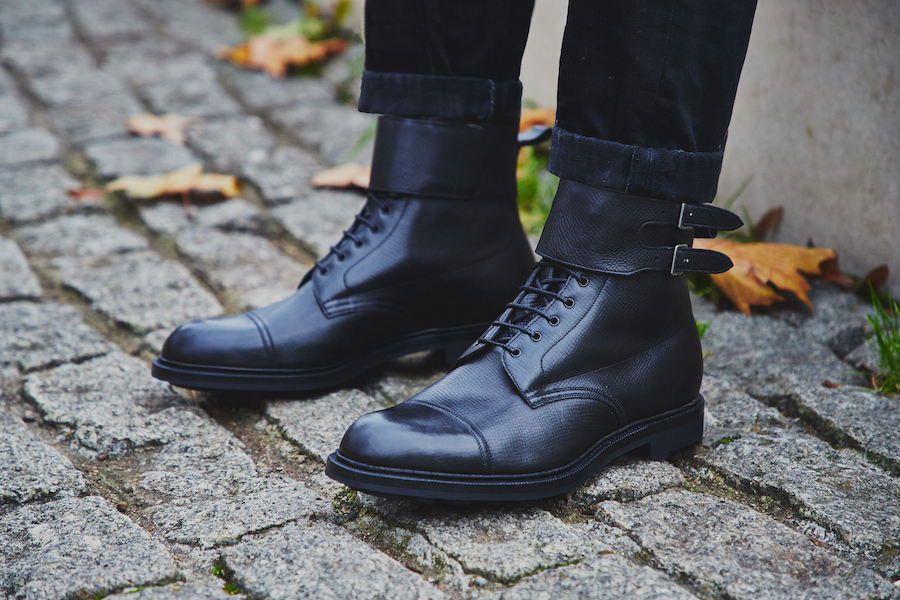 There’s no other design quite like Gaziano & Girling’s Urban Commando, created in collaboration with TheRake;it exists in a category entirely its own. G&G is known for its sculptural take on footwear, and specialises in producing svelte formal shoes that are aggressively waisted and feature chiselled, square toes. This boot is all of these things, and from the top down resembles every other Gaziano shoe that has been built on its slim Deco last. Except there’s a big difference: the sole. A custom commando sole – usually reserved for clunky field boots – it offers up ultimate grip and robustness, perfect for navigating wet city streets, whilst the slim last and subtle broguing ensures the design retains its elegance. The pebble grain Alpine leather’s rich mahogany shade will get better with age and is best combined with navy blue, dark green or stone coloured trousers. 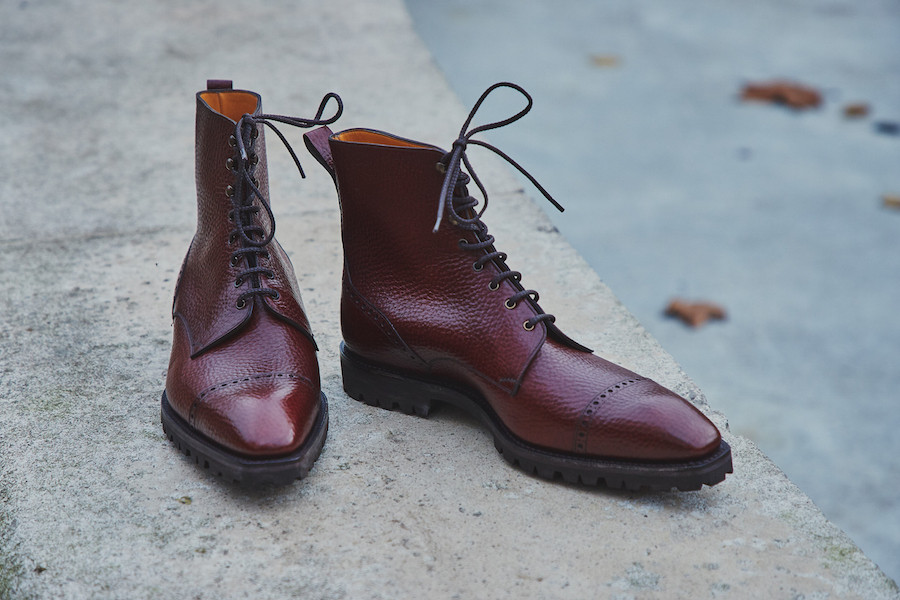 For outdoor pursuits, a pair of Goodyear-welted leather boots just won’t cut it. Leather soles - no matter how robust - are simply not made for treacherous country walks. The alternative though – Wellington boots – are far from attractive. That’s where Ludwig Reiter’s Maronibrater design comes in. Handmade in Austria from hard-wearing Russian leather with soft brown suede panelling up top, they are genuinely stylish alternative to the far inferior rubber welly boot. For added warmth, they are lined with shearling and an adjustable buckle ensures a comfortable fit, whilst the storm welt and commando rubber sole will keep even the worst weather at bay. 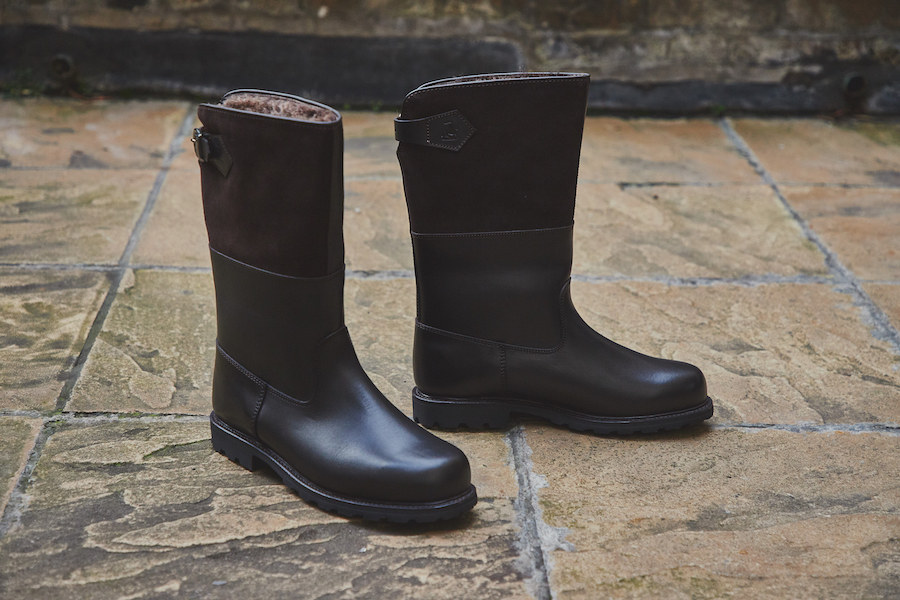