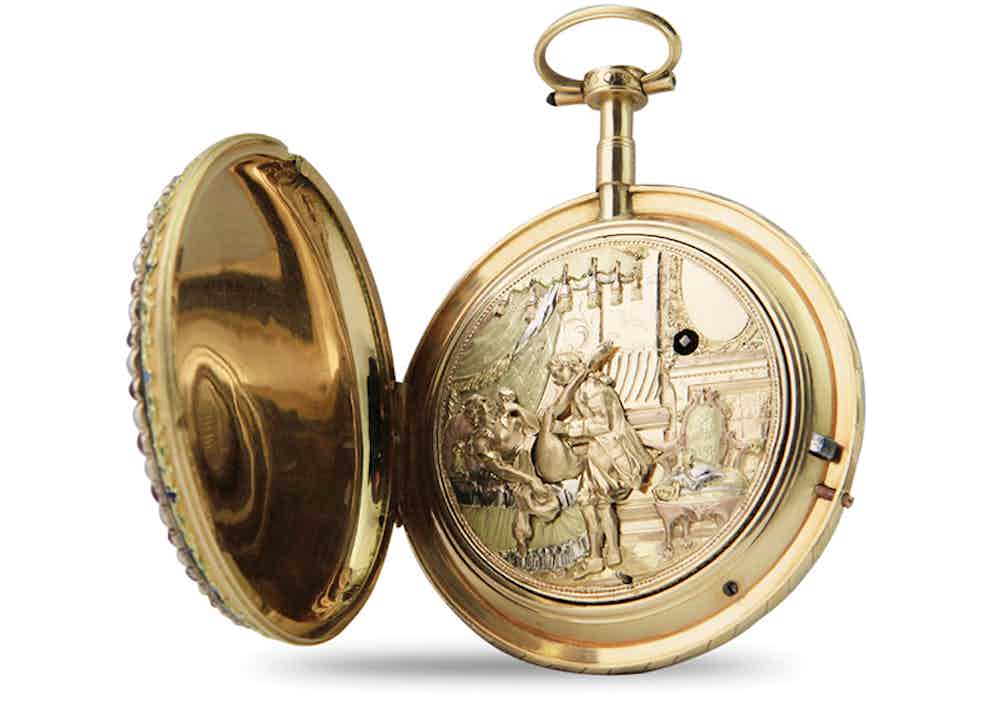 Today we hear a lot of talk about the future of wearable technology. Data-streaming glasses, 4G shirts, online tights and what-have-you. But this is not new. After all, what is a watch other than wearable tech?

And everybody, at least if he or she is honest, knows how pornographic content of one sort or another is often present in today's technology of smartphones and tablets. It would be pleasant to pretend that the creation of a global wired community was leading to more study of Virgil's Eclogues, but more people are watching screens with 21st-century versions of Debbie Does Dallas.

The trade began in the late-17th century with exports to China: how might quiet afternoons in the Forbidden City be beguiled by a handsome watch with scenes of a rutting gweilo, humping in sync with the passing minutes and seconds in the Emperor's silent palace.

Collections of erotica, in whatever genre, acquire additional seductive force by being kept from view. For example, in 1865 The British Museum decided to put all its 'obscene' material into a collection known as The Secretum. In the absence of much documentary proof for or against, it is irresistible to think that all the great watchmakers have a Secretum of their own: treasure houses of unseen tick-tocking erotica.

Literature is full of references to sex and time. The poet Andrew Marvell, wooing his Coy Mistress, promises to: 'Tear our pleasures with rough strife / Through the iron gates of life /Thus if we cannot make our Sun stand still / Yet we will make him run'. So there's another haunting suggestion of how sex changes perceptions of time - the more we enjoy ourselves, the quicker time passes. For Carlo Petrini, founder of The Slow Food Movement, the thing eating and sex have in common is that each is best done slowly. 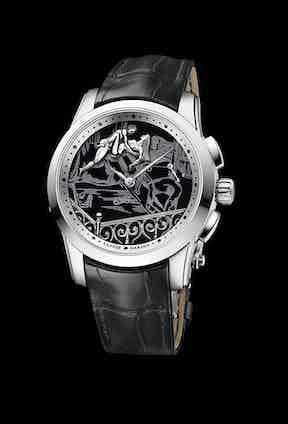 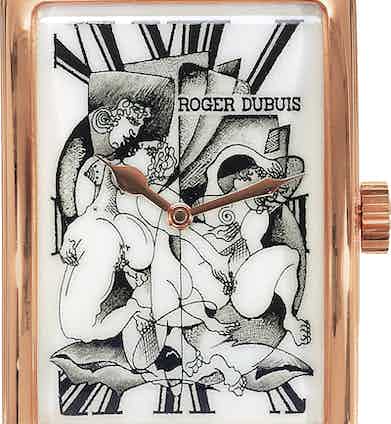 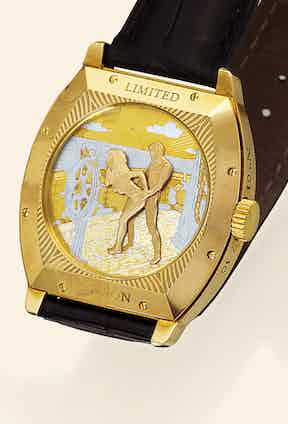 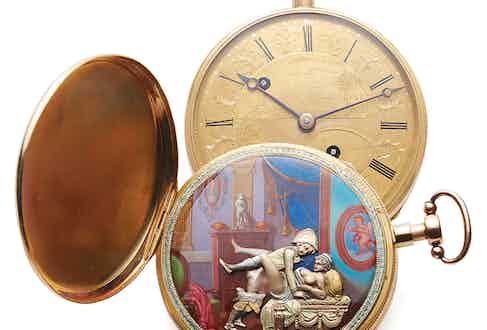 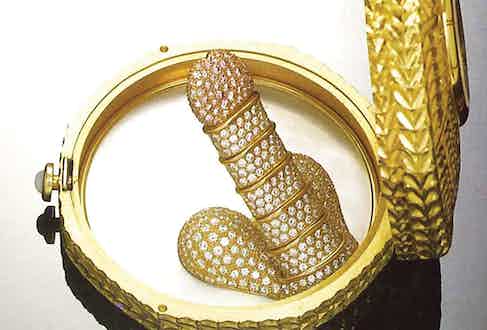 The development of automata in the Geneva area, by Jacquet Droz and others, was a symbolic moment in man's historic escape from God during the period we now call The Enlightenment. An automaton's simulacrum of life put Man in competition with the Divinity.

One Jaquet-Droz masterpiece was a duck that digested and defecated, causing astonishment wherever it was demonstrated. It was, naturally, an advertisement for his watchmaking skills. Meanwhile, his contemporaries might automate a scene of vivid lovemaking as the quarter-repeater drives the piston movement of a pink male bottom grinding through the repetitive motions of love with a clockworking girl. 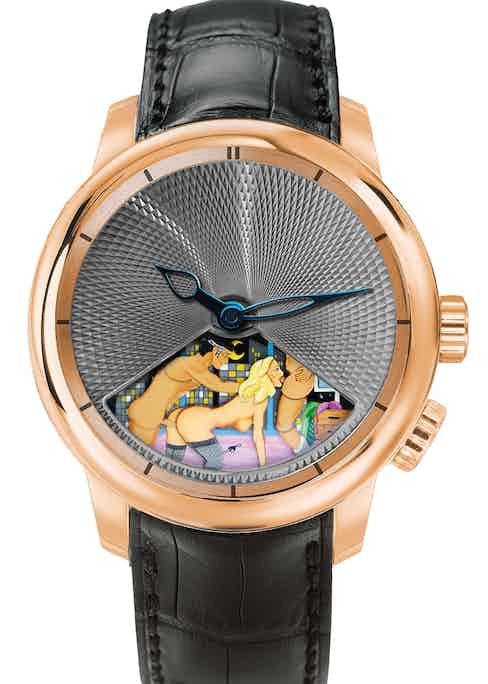 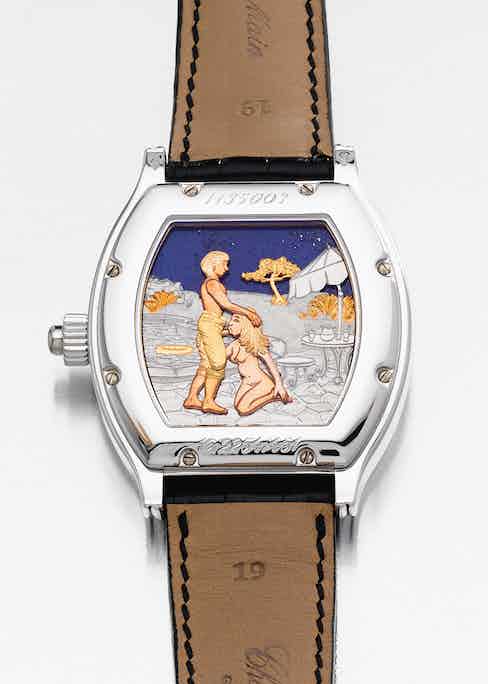 An already vigorous stream of native English pornography was engorged by France. Legal records reveal how familiar pornography was three centuries ago in London. In 1688, the publisher of The School of Venus (translated from L'Escole des Filles) was fined 40 shillings at The Guildhall for publishing what the diarist Samuel Pepys called a 'mighty lewd book'. Its subject was the instruction of a young woman by an older one, more skilled in the ars amatoria. This was a recurrent design motif in erotic watches. So too was the sexually ambitious nun who appears in Venus dans le Cloître, a book of 1683 intended to subvert the Church by acknowledging the sexual turbulence beneath a nun's chaste habit. At an adultery trial of 1796 a Mrs Errington admitted showing copies of John Cleland's Memoirs of a Woman of Pleasure, better known as Fanny Hill, to her friends. I wonder whether Mrs Errington owned a watch with similarly provocative content. Harris's List of Covent Garden Ladies began publication in 1757 and continued for nearly 40 years as an annual list of loose women, a sort of Baedeker of bawdiness. An entry in Harris's List refers to a woman who enjoys, and shares with her clients, 'an extraordinary titillation in all her members'. Subscribers to Harris's List would surely have been customers for erotic watches?

Typical is a watch by the Geneva maker Henry Capt. A secret scene is revealed in gold and enamel. Two gentlemen and a woman are in an interior and about to do what two gentleman and a woman might most feel inclined when each is expecting a ménage à trois. The action is activated via a steel cam and, as the decisive moment looms, music plays. The technical description of the mechanism sounds like a parody of sex: full-late double-train movement with cylindrical pillars, going barrel and polished end-piece. All of this activated by twisting the pendant. 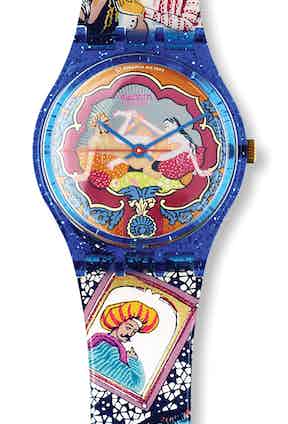 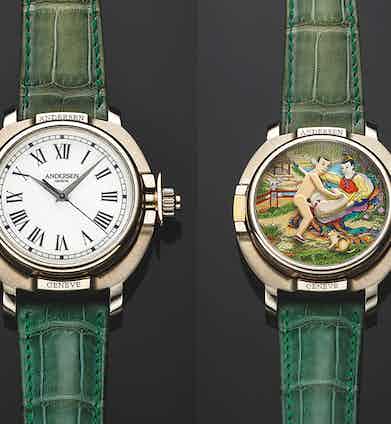 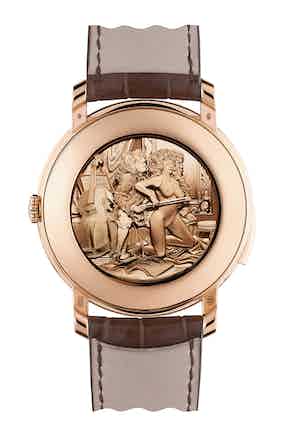 Although the production of erotic watches was always necessarily covert, it was commerce that reached a significant volume. So much so that, in 1817, the Consistoire de Geneve had to issue a critical edict to the watchmakers of La Chaux-de-Fonds. 'Obscene jewellery has long been manufactured in your Canton!' the Calvinists nagged. The Consistoire was appalled by the popular 'lewd scenes'. And it was not only watchmakers. The depraved craftsmen of the Swiss Jura were also busily decorating snuff boxes and signet rings with scenes of lust. There was a demand to stop this 'wretched commerce' so as to protect the reputation of Switzerland abroad. Instead of gratifying lustful tastes, craftsmen were ordered to return to Calvinist principles.

Again, time is an ever-present question in any discussion of sex, whether personal or horological. What is a quickie other than a bargain between passing time, opportunity and desire? Many other vernacular descriptions of sex also involve a suggestion of time. There is, for example, the French institution of the cinq à sept: that hiatus in the day, between office and home, when a man so inclined might visit his mistress. The French precision and bureaucracy indicated by the start time of five and the hard-stop of seven are charming, as if the waves of desire work to a timetable. Of course, he would need a reliable watch to make it on time.

This feature was first seen in Issue 6 of Revolution Magazine.