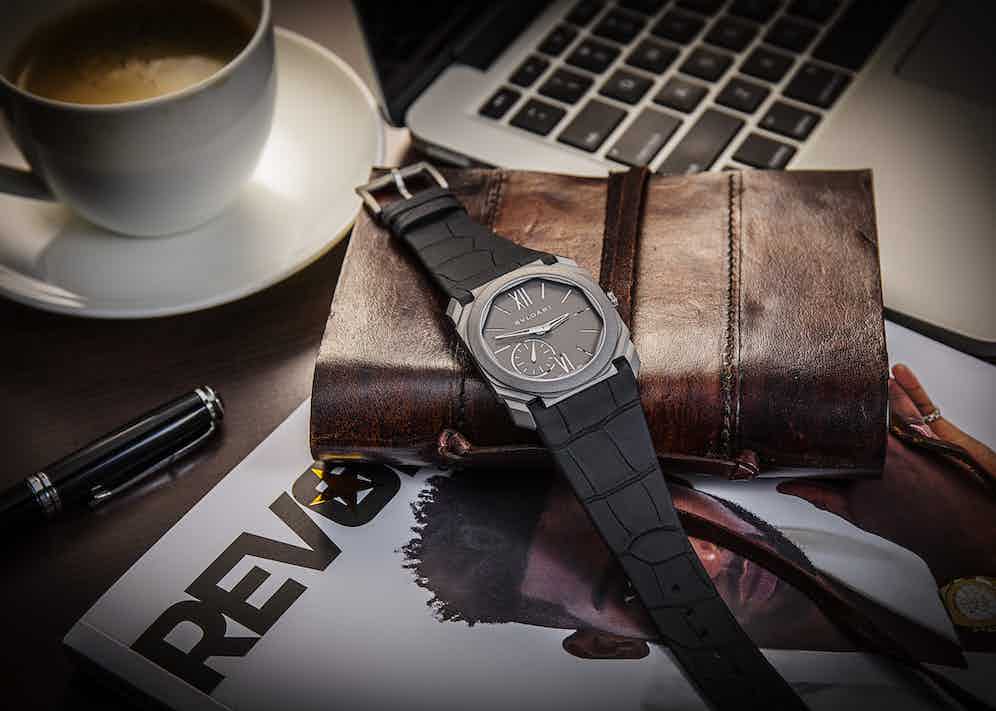 The post-war era of the ’50s stretching through the counter-culture ’60s and the heady opiatic ’70s was a golden era for the Riviera. And among its most revered denizens were the playboys that littered its undulating coastal outlines. Hailing from far-flung reaches such as the Dominican Republic, in the case of larger-than-life Porfirio Rubirosa, Germany, in the case of the legendary Gunter Sachs, and even modern-day Pakistan, in the case of Aly Khan, each made the holy pilgrimage to the mecca of sun, romance, and affluence, doing battle for seductive dominance through their accumulated arsenals of bespoke suits, multi-linguistic skills, athletic ability, bedroom heroism and romantic acumen. But of all the qualities of the legendary playboys from “Baby” Pignatari to Gianni Agnelli to Gigi Rizzi, the greatest asset, beyond manes of leonine hair, suntanned visages and sports cars driving skills, was their unparalleled taste.

And it is not a coincidence that the three men last mentioned are Italian, because there is a certain profound capacity for aesthetic appreciation that flows within the genetic make-up of all men hailing from the land of Caesar and Da Vinci. I oftentimes think about what if those men had lived today; if somehow, through a parallel universe prism, the world of the Riviera ceased to be the asinine land of priapically-winged fluorescent Lamborghinis, jeroboams of Ace of Spades wielded by braindead nightclub zombies and consumed by men with diamond-festooned “wrist game” — and in its place, the coastal climes of Southern France and Italy were once again a place where, in the words of my friend Nick Foulkes, “Money and taste actually aligned.” What watch would these paladins of panjandrumism wear with perfect dégagé élan as they spring out of their road-dust-covered 250 short-wheel-base Berlinettas, Rubinacci blazers draped casually over their shoulders?

The Octo In the Present Age

The more I think about it, the more I’m convinced that their watch of choice would be the modern Bulgari Octo Finissimo. Why so, you ask? Why not an ultra-rare three-coloured screw-pusher RCO “Paul Newman” Daytona with tropical seconds track? Well, because there is something of a cliché today related to wearing vintage watches — in many ways, they have become the millennial equivalent to the skeletonized double tourbillon, a way to instantly state, “Look how much money I have”, without opening your mouth or wallet. But the problem is, in order for enough people to instantly recognize that the 40-year-old Big-Crown, ex-military, brown-dialed whatever-you-have-on is worth three fully loaded Bentley Bentaygas, it means that the vintage thing has hit such critical mass that it’s become commonplace. And as such, a true playboy, one whose objective is to unite intellect and erudition with his libertine impulses, is not going to take the path most traveled.

The Bulgari Octo, on the other hand, takes actual taste to appreciate. It is in essence an ultra-flat watch with a distinct faceted eight-sided case and a complimentary yet contrasting eight-sided bezel. But one look at it and your eye is instinctively tempted to exploring its dynamic sculpturalism. My friend Flavio Manzoni, who is Ferrari’s creative director, talks often about dynamic tension in objects. And in the Octo, the team of watch boss Guido Terreni and design director Fabrizio Buonamassa — yes, not coincidentally, two Italians — have done precisely that. 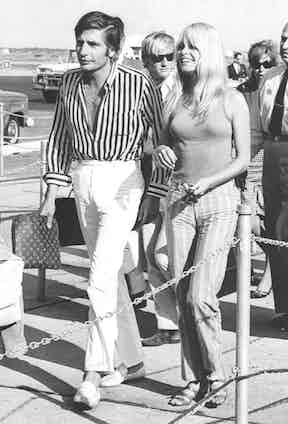 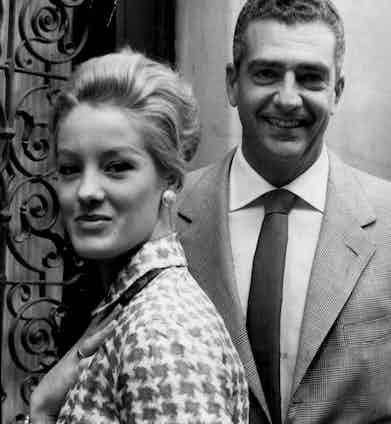 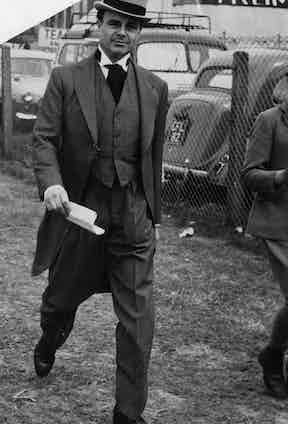 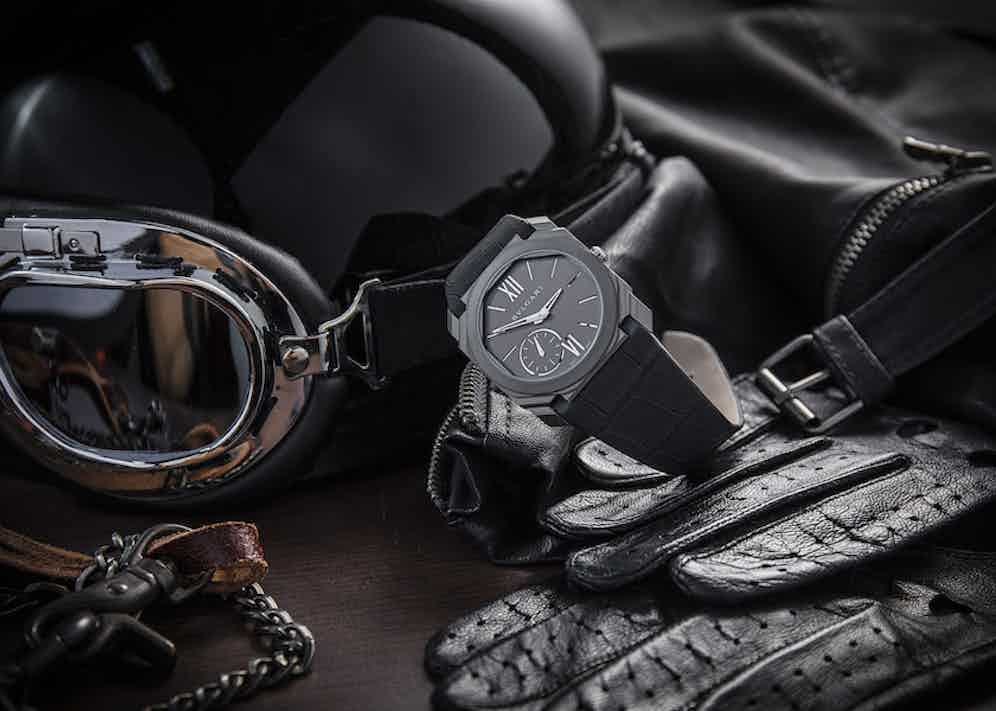 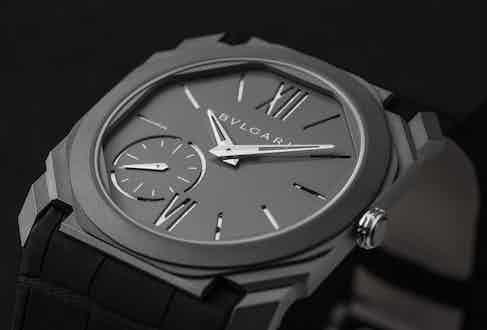 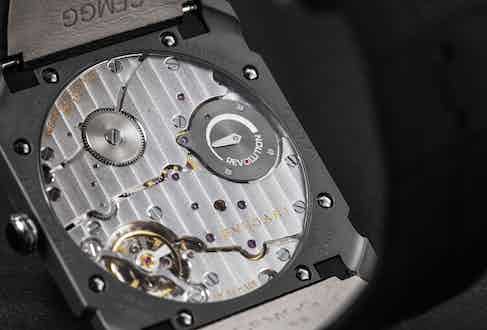 The Octo Finissimo is, from an aesthetic perspective, probably the most uniquely shaped modern men’s timepiece on the market. Somehow, it is able to unite a sense of Latin sexiness with a jolt of architectural intelligence, while displaying a full mastering of Swiss watchmaking acumen. Much has been made about the original Octo watch being designed by Gérald Genta, and while there is a truth to this, the reality is that Terreni and Buonamassa have actually taken the original geometric concept of the Octo and created a far more relevant, exciting and appealing modern watch. This is amusing because two of Genta’s other watches, the Royal Oak and the Nautilus, have remained in their essentially unchanged forms since he created them in the mid-70s. Contrasted with the Octo, you’ll see that even though there is an intellectual connection between all three watches, the Octo feels so much more a product of the modern world — the watch Genta would have designed if he were alive today and at the height of his creative powers.

The extraordinary ability of Bulgari as a watchmaker becomes evident when you strap the Octo Finissimo on your wrist and turn it sideways. Suddenly your mind struggles to understand how such an incredibly thin and refined watch can also exhibit such dynamic muscularity. And it is these two contrasting aspects of the Octo Finissimo that makes it so delicious to wear. Because its refined elegance in terms of its 5mm overall thickness (OK, 5.15mm to be exact) makes it perfect to slip under the shirt cuff of a Cifonelli smoking jacket, yet its 40mm presence resplendent with its sharp, at times even brutally sexy, facets makes it perfect to be worn in a sports chic context — think poolside at the Hotel du Cap gesturing at your vintage wooden-hulled Riva moored below, using your Behike as a pointer.

In order for Bulgari to create such a thin watch, they had to unite three of their unique competences related to dial-, case- and movement-making. For example, the bezel has feet milled into it at the machining stage that travel all the way through the case and are fixed in place in the back of the watch. The Octo Finissimo doesn’t have a traditional caseback so as to minimize the profile of the case. As such, the movement is put into the watch from the front and the bezel holds the entire architecture of the watch in place. The dial of the watch is another technical masterpiece — at 0.2mm in thickness, its overall dimension once the special galvanically grown indexes are glued onto it is still thinner than a single applied index on a traditional watch. The in-house full-bridge movement has 65 hours of power reserve despite being only 2.23mm in thickness, and from my experience with it, has been extremely reliable in terms of timekeeping. For 10 reasons why you need a Bulgari Octo Finissimo in your life, read this.

But upon pondering the internal philosophy of the great Riviera playboys, it dawned on me that they all loved a sharp contrast, a way to invert the status of typical luxury icons. And so, a thought began to coalesce in my mind. What if we could do the ultimate stealth version of the Bulgari Octo? When I proposed this to Buonamassa and Terreni at the end of 2015, they both laughed because they already had precisely this watch ready to be unveiled at the 2016 Baselworld Watch Fair. This was, of course, their Revolution Award-winning Octo Finissimo Minute Repeater (the world’s thinnest minute repeater) rendered with an amazing sandblasted grade five titanium case and titanium dial with skeletonized dial.

Says Terreni, “We looked into titanium for several reasons. First, every minute repeater we could think of was old-fashioned and we wanted to make this complication relevant to the modern consumer, a guy who might wear his repeater in a totally casual way with jeans and a leather jacket, for example. Grade five titanium was also extremely good for the acoustic properties of the watch.”

Buonamassa adds, “It is also one of the strongest and most resistant materials, which made it even more important for a highly relevant and modern minute repeater. Finally, the look of this matte titanium case and dial was something we fell in love with. The ultra-matte almost-industrial look combined with the sculptural facets and uniquely elegant profile created a watch we thought brought a whole new spirit to the Octo.”

The brand’s CEO Jean-Christophe Babin agrees: “The rose-gold watch is something that is very beautifully and traditionally luxurious. But we loved the idea of a watch that went in the opposite direction as well; one that subverted traditional luxury codes. We had great success with our Ultranero, or black versions of the Octo Finissimo, but we wanted to go a step further and titanium was the answer. The result is something that consumers have absolutely responded to.”

Says Terreni, “It’s funny but today the most mature watch customers want their watches ultra-light, because they associate it with the superlight versions of sports cars like the Ferrari Speciale or Scuderia cars. They find a real benefit to wearing an ultra-light watch in that it is so easy to live with; it is so effortless to wear. And our minute repeater at sub-46g in weight is exactly that.”

A Bulgari Octo For Revolution

“OK, I recognize that the Bulgari Octo Finissimo repeater in titanium is one of the coolest, most relevant, sexily stealth watches on the market,” I said, “But how about a simpler small-seconds version of this watch with the same grade 5 titanium case and dial?”

Fortunately, this brought a smile to Terreni’s and Buonamassa’s faces and it was quickly decided that Revolution would have the privilege of creating the first titanium ultra-thin small-seconds Octo in Bulgari’s history. Says Terreni, “I like this as an expression of our relationship, because Revolution has always been a magazine about connecting watches (both modern and vintage) to contemporary culture. Similarly, our Octo Finissimo Petite Seconde is created with exactly the same mission to unite all our values, our uniquely Roman design philosophy and our traditional Swiss watchmaking ability, with the modern world and for the modern consumer.”

Upon agreeing to collaborate on this watch, the first subject was creating two small design distinctions. The first that we would use was the same 0.3mm-thick dial (thicker than the normal dial by 0.1mm because of the structural necessities of it being skeletonized) found on the minute repeater, but with the small seconds transplanted to seven o’clock. “What else can we do to further distinguish the watch?” Terreni asked, and we soon arrived at the mutual conclusion that the dial must have skeletonized Roman numerals in homage to the brand’s Roman roots. In particular, I love how beautifully the skeletonized “6” has been integrated into the skeletonized track of the seconds subdial. There is nothing more charming than to be offered a glimpse of the sumptuously perlaged baseplate of the watch through the slots of the skeletonized dial.

Next came the question of Revolution branding, which we decided had to be so subtle that you wouldn’t notice it unless your eye searched for it. And here Buonamassa and Terreni arrived at the brilliant touch of having the Revolution “masthead” subtly integrated into the power-reserve display at the back of the watch. The final result is a watch that is breathtaking — the ultimate symbol of ultra-stealth sporting chic that has its roots in the halcyon era of the Riviera playboys of the ’50s through the ’70s, but is very much a child of the age we live in today. It is replete with dynamic tension. It is supremely thin yet provides a powerful presence on the wrist; it is thrillingly luxurious expressed through the orgiastic high finish of every element, yet it is incredibly stealthy. Terreni even insisted on finding an ultra-matte alligator strap. He says, “It is so matte it looks vulcanized or even rubber, but it is the highest quality alligator leather with an all-new finish to make it the stealthiest strap we’ve ever made.” And finally, the watch is visually engaging to the extreme. Yet strap it on, close your eyes and you can easily forget you are wearing a watch at all — such is its sub-40g lightness. 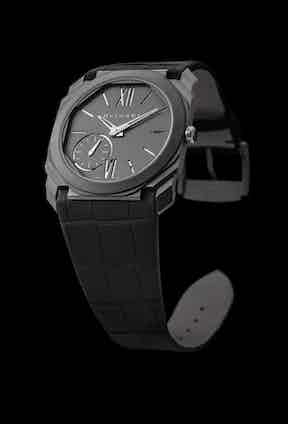 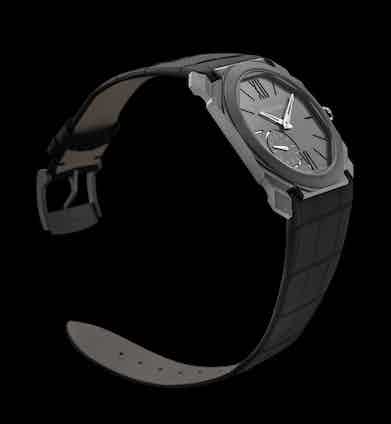 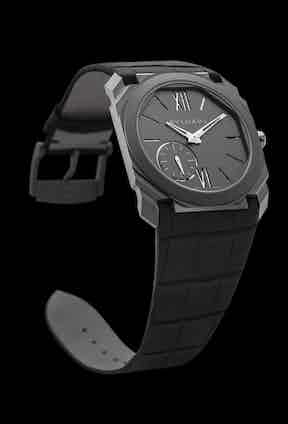 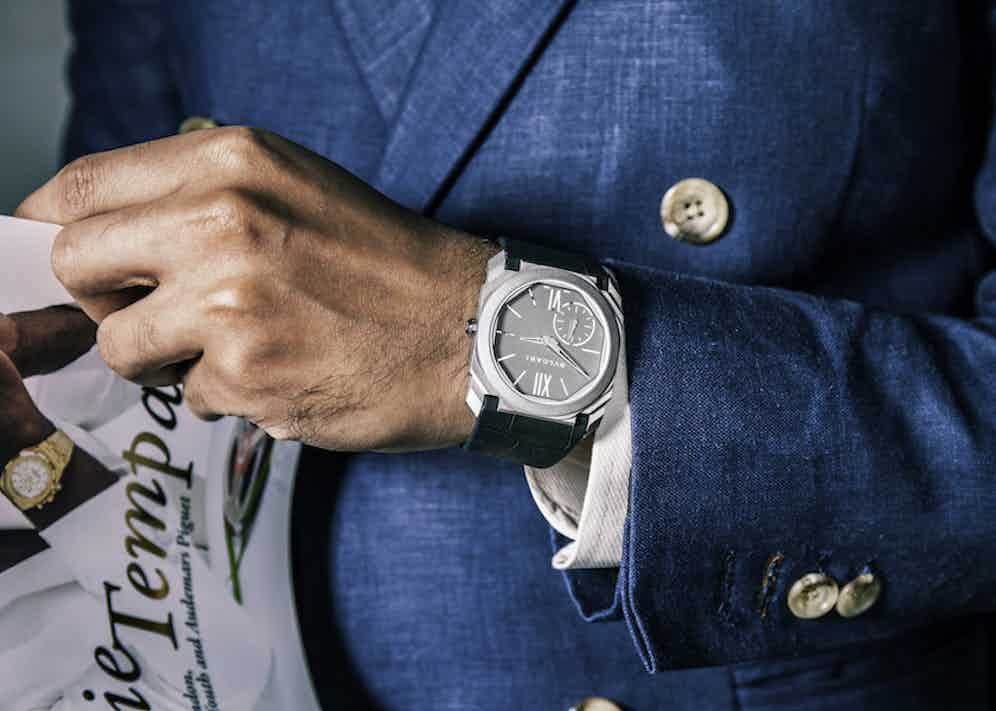 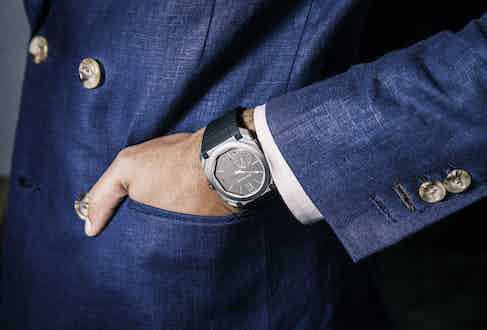 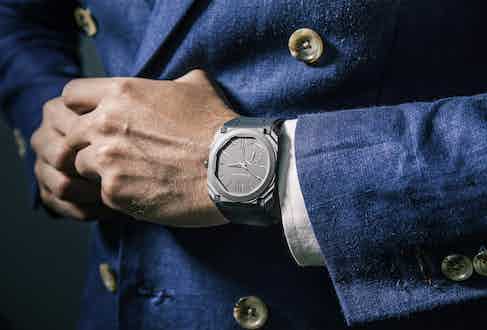 If you would like to enquire about the Bvlgari-Revolution Octo Finissimo Limited Edition please visit TheRake.com/shop, or email shop@therakemagazine.com.