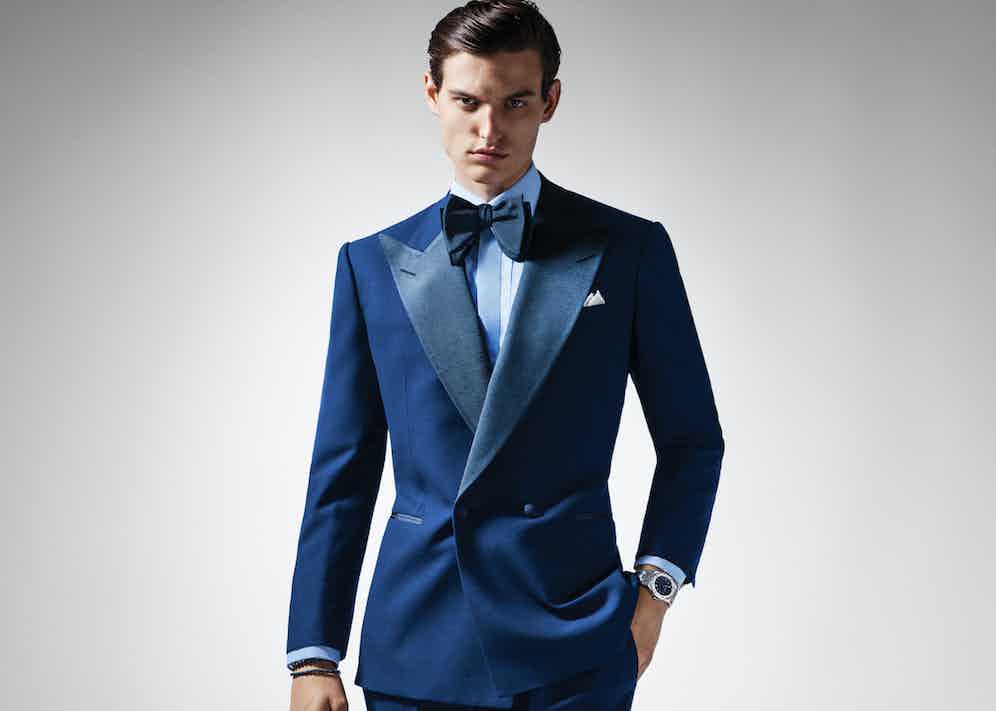 It’s probably fair to say that when you think of Savile Row, ‘innovation’ isn’t the first word that pops into your head. The street is somewhat of an institution, representing all that is great about British style, and it has done so for over two hundred years. It’s steeped in tradition, particular values and a certain timelessness but some would argue that the rules that have come to define it over the decades can be a touch restricting. There is the idea on The Row, and a very British one at that, that things should be done in a certain way. There is the notion of the ‘Savile Row suit’ for instance, which can be defined by its military stature, all strong roped shoulders and heavily expressed chest.

But to say that there has never been innovation would be gravely unfair and indeed not true. First came Tommy Nutter in the 1970s who completely revolutionised British tailoring from his premises on 35a Savile Row, producing overtly eccentric suits for the rock n’ roll set. Then, in the 1990s, the likes of Ozwald Boateng, Richard James and Timothy Everest brought on a mini revolution of their own, contemporising the British suit with less highly structured cuts and use of colourful fabric.

Today, the very best tailors are continuing to innovate albeit in far more subtle yet no less interesting ways. This could be no more true for Savile Row firm Chester Barrie. The ready-to-wear specialists, headed up by Senior Creative Christopher Modoo, has collaborated with The Rake to produce the splendid garments you see on this page; the Kingly low-buttoning double breasted dinner suit, the ottoman Blazedo and the pleated cotton/linen dress shirt. Chester Barrie are known for their incredibly elegant evening wear, which has been championed by the likes of male supermodel and modern day style icon David Gandy on more than one occasion. For their collaboration with The Rake though, Chester Barrie has turned their sartorial dial up to eleven, producing an exemplary selection of eveningwear staples.

"Chester Barrie has turned their sartorial dial up to eleven, producing an exemplary selection of eveningwear staples."

A highlight of the mini-collection, the Kingly dinner suit is quite simply the finest example of a ready-to-wear evening suit that The Rake has ever come across. It is at once striking and subtle and just as elegant as it is bold. You might first notice the fabric, which is an attractively vivid shade of blue, but look closer and you’ll see it’s not a usual formalwear choice. Mr Modoo explains, “the Kingly dinner suit’s fabric is from Vitale Barbers Canonico. It is a 4ply worsted often used in superior travel suits, yet here the texture lends itself well to evening wear as a change of pace to the normal barathea”. He continues, “It is equally correct and subversive. The ventless back and jetted side pockets will please even the most pedantic clothing enthusiast but the brighter navy with dark blue lapels will attract attention. This ain’t no midnight blue. The lapels are executed in a stunning Mogador twill, which is a traditional weave of silk and cotton from a small artisanal mill in Como. Unlike most facings, which are merely decorative, this fine fabric actually lends body and shape to the generous peaked lapels. We are also pleased to offer a bow-tie in exactly the same cloth as the lapels…it is annoyingly difficult to buy bow ties that perfectly match the lapels of evening suits. The Kingly DB shape buttons low and creates the most flattering silhouette on the wearer. Furthermore, the absence of “show” buttons gives a clean, modern look”.

When combined with the complementary light blue pleated dress shirt, the Kingly DB is a true showstopper. The shirt provides a dandyish element with its pleated bib front, but the fabric chosen for it is the real talking point. Made with a combination of linen and cotton, which is a pairing normally associated for lightweight, casual summer shirting, it provides an interesting juxtaposition against the traditionally formal qualities of the shirt. Although as Modoo points out, linen has more of a history in formalwear than you might first think, “linen is often pigeon-holed as a casual cloth yet as recently as the early 20th century, it was used for formal shirtmaking. It feels right to treat this ancient fibre with the appropriate respect”. 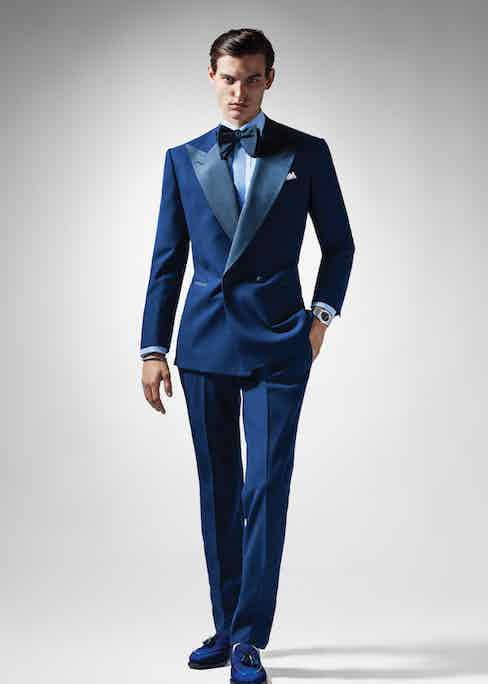 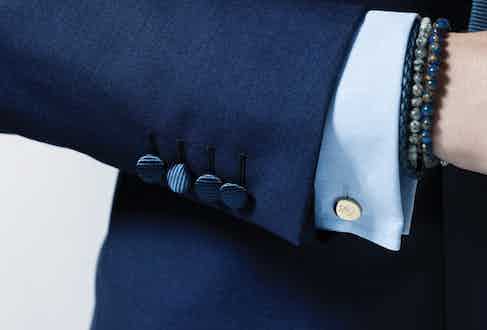 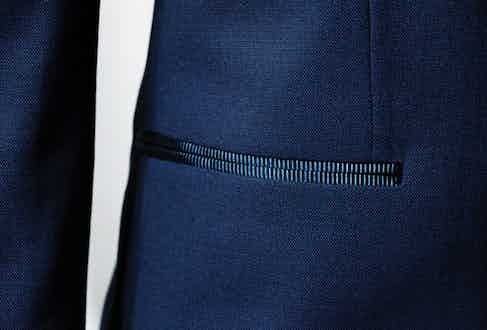 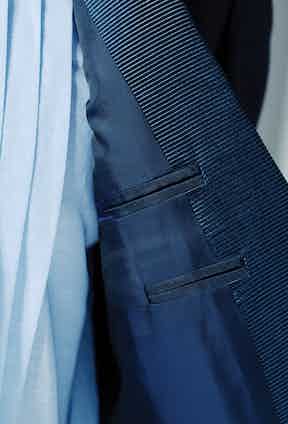 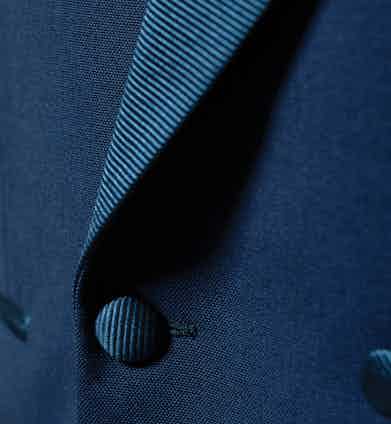 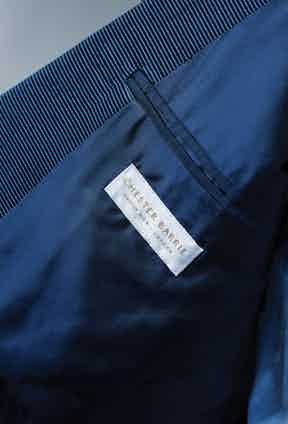 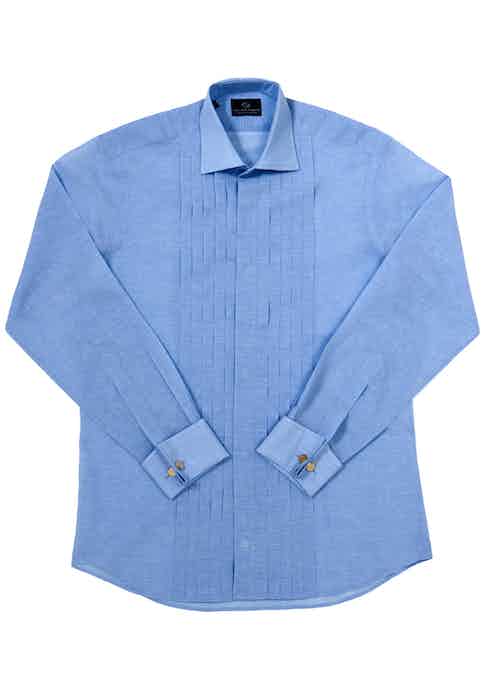 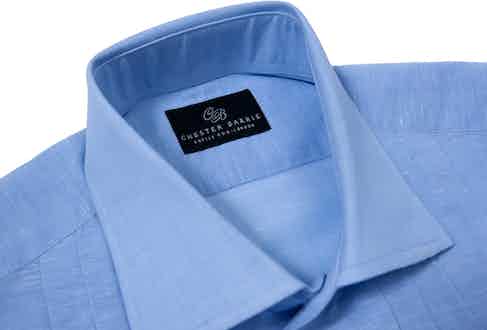 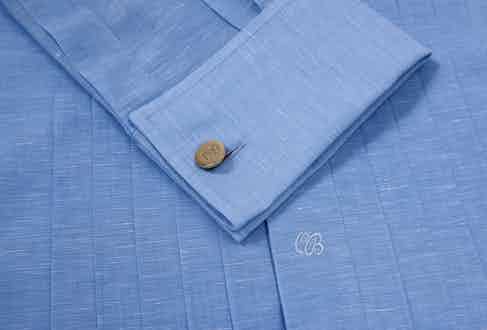