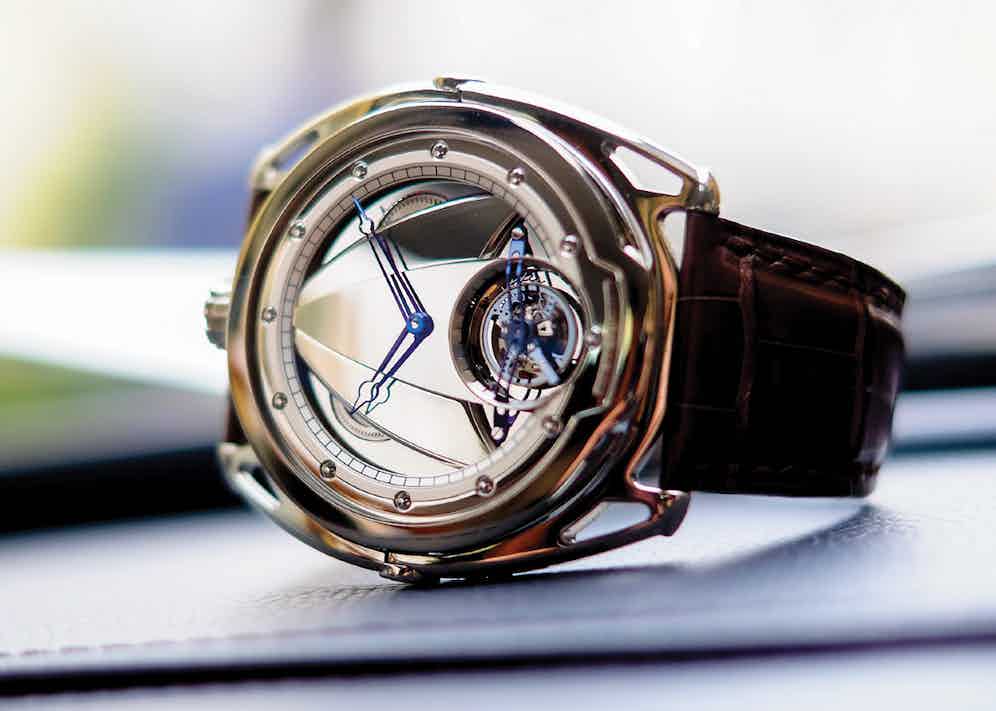 For self-described “modern-day alchemists” De Bethune: “Each development is governed by a constant quest for aesthetic excellence, subtly interacting with the pursuit of high technical standards.” It is this guiding principle that resulted in the DB28T, the rather delicious watch pictured here. But it could just as easily have been the mission statement of the people designing the bigger piece of gleaming metal, the era- defining sports car that was born half a century earlier: the Aston Martin DB4. The car takes its DB initials from David Brown, the industrialist who bought Aston Martin after the war and ran it until 1972, the longest period of continuous ownership in the company’s often- turbulent 100-year history. The firm was founded in 1913 with the sole aim of making cars go faster in order to win races. This it did very well, but neither the initial owners, nor the subsequent pre-war heads of the company, really cared much for the business of selling cars. The founders struggled to make money, as they saw commerce as a necessary evil rather than a core part of the business. The company changed hands a couple of times before the Second World War, with race wins continuing to come, but sales failed to fill the coffers. Then along came Brown, who realised that worth cannot be measured by chequered flags alone. He bought the company because of its racing history, one that he built upon in the 1950s, Astons winning the World Sportscar Championship with Stirling Moss at the wheel, and the Le Mans 24-Hours with Carroll Shelby at the helm. Brown also understood that while speed wins races, style wins hearts. He started making road cars that had the looks to go with the performance, cars that would make the Aston Martin name known for beauty as well as brawn. Such is the respect for his name at the company that to this day – more than 40 years since he sold the business and 20-plus years after his death – his initials are still used, right up to the DB11. 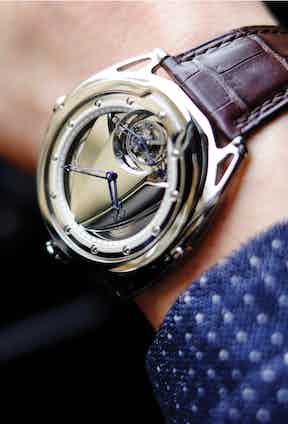 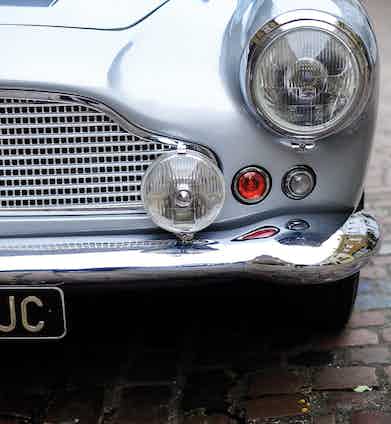 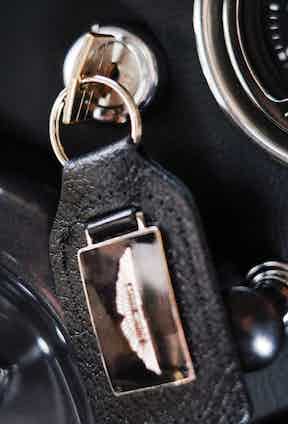 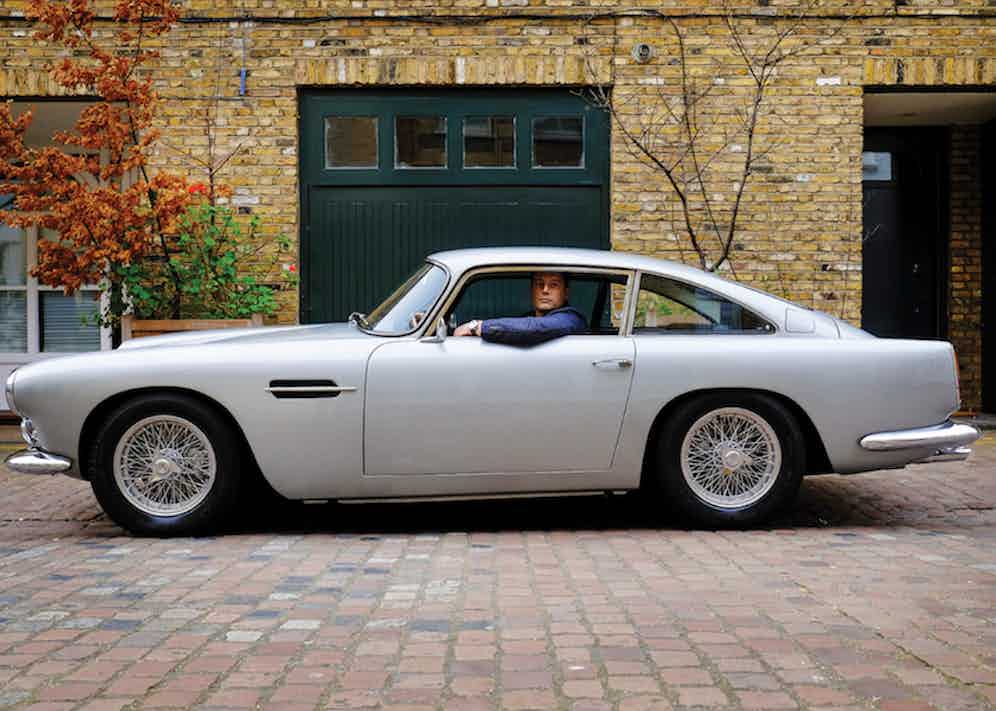 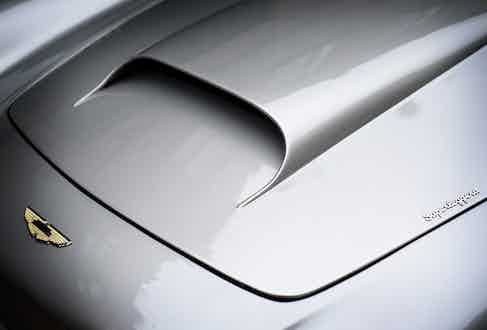 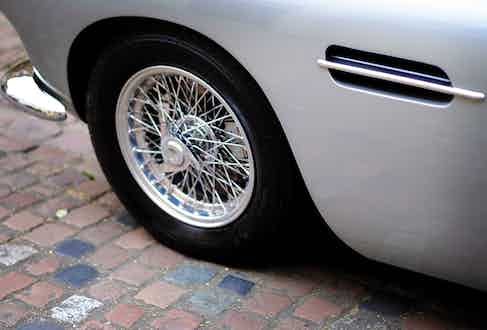 The watch’s DB initials have their own history. De Bethune was only founded in 2002, but the company name winds way back into horological history, referencing Chevalier de Bethune, a French nobleman credited with various clock-making innovations in the early-18th century, including a new type of escapement that bore his name. The modern-day De Bethune is keen to pay tribute to the past, but has its eyes firmly on what is now and what is next, describing its work as “21st century watchmaking art”, which sees the development of new technology as a central part of the artistic realm, rather than a competing discipline. It can be difficult to see art and technology as totally harmonious, as there are always practicalities that must keep the artistic sight of fancy tethered in a workable reality. For De Bethune, it helps that the co- founders approached it from different sides: David Zanetta, art collector and specialist in antique timepieces, brings up the design flank; Denis Flageollet, a fourth-generation watchmaker, takes the lead on the technical side. The company devotes an unusually high proportion of its resources to research and development, content to produce just a small number of watches every year for an exclusive clientele that appreciates a quietly celebrated watch company with products that speak for themselves.

The DB28T features a silicon/white-gold balance wheel, a De Bethune-patented creation presented by Flageollet in 2010. The use of silicon allows for extreme precision in machining which, combined with the low weight and low friction, leads to greater reliability and accuracy. The silicon and titanium tourbillon took two-and-a-half years to develop. It beats 36,000 times per hour, rotating every 30 seconds within a cage which weighs just 0.18 grammes, which De Bethune says makes it the lightest on the market, about a quarter of the weight of other tourbillon carriages. A De Bethune signature can be seen in the floating lugs, the spring-loaded titanium bars that attach the case to the strap. The lugs articulate at the pivot points at 3 and 9 o’clock, ensuring a snug t on the wrist. The mechanical hand-wound movement is made, as are all De Bethune calibres, at the manufacture in the Jura Mountains. The DB 2019 movement in this watch contains 298 components and is hand-decorated with circular-grained and chamfered steel parts. Technically, De Bethune is right in the mix with the fairly small number of watch companies that can be considered to be at the cutting edge. And while aesthetic quality is harder to measure than technical prowess, it would be difficult to deny that the watch seen here is anything other than an extremely beautiful object, so the yin and yang of mechanics and majesty seem to be chiming in perfect harmony.

At Aston Martin, a bit of outside help was needed to get that balance. When David Brown commissioned the DB4, he had the vision to see that while one part of the equation could be found in- house, the other needed outsourcing. He had a race-bred engine, a 3.7-litre straight-six that had been tested on the track in Aston’s DBR2 sports racer. He had engineers that could build a car as dynamically capable as any other. He was confident he could make the machine, but he needed some show to add to the go. So what did he do? He went, of course, to the country that has made more beautiful cars than the rest of the world put together: Italy.

The DB4’s glorious curves were designed by the Milan coachbuilder Carrozzeria Touring, whose patented Superleggera (superlight) bodywork consisted of lightweight aluminium panels fixed to a framework of steel tubes. Although the design was Italian, the workmanship was British, with the Touring bodies built under licence at Aston Martin’s Newport Pagnell factory.

When the DB4 was unveiled in 1958 it caused a sensation. It was simply unfair that a thing of such beauty also had the heart of a racing car and could leave pretty much anything on the road for dead, all the while carrying passengers and luggage in leather- bound luxury. The DB4 continued in production until 1963, when it was replaced by its direct descendants, the DB5 and the DB6.

The DB4’s design was so strong that Aston Martin didn’t need to break away from the overall look of the original until the DB6’s run ended in 1971. But for many people the DB4, smaller and lighter than its successors, remains the most pleasing design. Buying one is still a relative bargain compared to buying a DB5 – being the best- loved Bond car pushes that model into million-pound territory, whereas a pristine DB4 like this one can be obtained for less than half that price. More than 50 years after it was designed, the DB car causes much lustful gasping and swiping for photos. And the DB watch, gleaming so much that it was a challenge for photographer Jim to keep his reflection out of the pictures, is wonderfully at home perched on its wooden steering wheel. Both machines were created by fine minds to break new ground technologically. But they also adhere to the principal that, if you want people to love your products as much as they respect them, it helps to house all that science in a metallic work of art. Looking forward is important, but so is looking good. 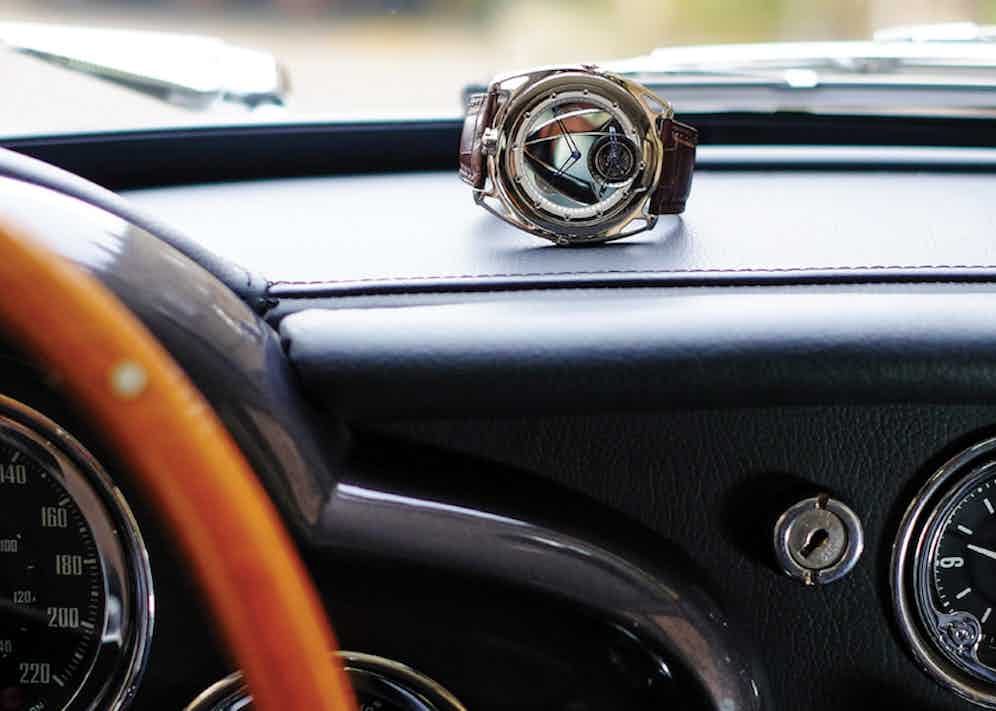