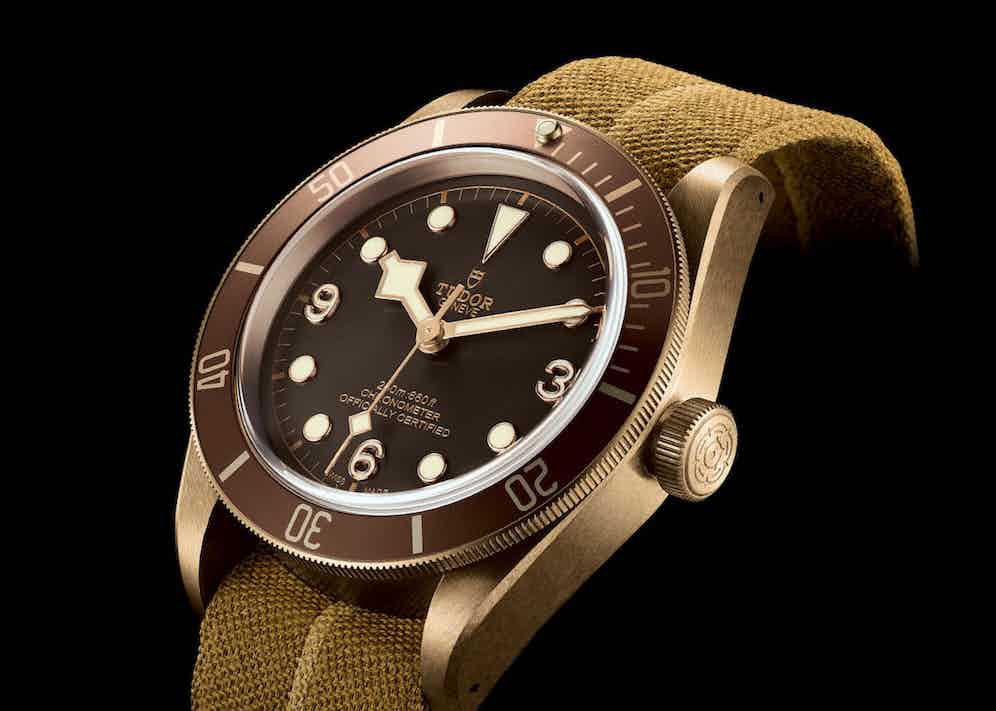 On paper bronze is the last metal you’d want to build a watch case from. Luxury watchmakers have for years pioneered the most incredibly strong materials for their sports watches, such as Rolex and its bombproof 904L stainless steel or Richard Mille and its virtually indestructible NTPT Carbon. Bronze is the antithesis of these materials. It’s soft, malleable, scratches easily and actually changes colour over time in a way that is both unpredictable and for some, rather unsettling. You buy a watch because of the way it looks now rather than how it may appear in ten years time. Or do you?

For some time now consumers have been drawn to the fabled notion of ‘patina’, that is, objects that are imperfect, displaying their wear and tear proudly and in a way that is both charming and rather alluring. Patina is traditionally only achievable through time, yet recently brands have started to engineer their own. Look at Berluti’s fabled leather shoes or the pre-burnt purpling of a Triumph Bonneville exhaust manifold. In this sense, bronze is the ideal case material for a luxurious timepiece. Like a pair of raw selvedge denim jeans, it will age gracefully and tell its own story through its little dinks and subtle colour changes. And, key for the consumer yearning for individuality, it will develop a patina that is unique to the wearer. But bronze is not just for show and it’s no new phenomenon, despite a number of famed manufacturers recently crafting watches from the metal. Bronze has in fact been used extensively over the last century by brands looking to create highly functional, durable and authentic diving watches.

One cannot talk of bronze diving watches without mentioning the metal’s history with the maritime world. Bronze has been favoured by ship builders for centuries for its high corrosion-resistance and ability to withstand the demands of the ocean. It’s still used in engine components, hull cladding and as the chosen material for high-performance propellers and of course it was the predominant material for the fantastical diving suits of the 18th century onwards. It wasn’t until the 20th century though that bronze was widely utilised in watches, with brands like Panerai pioneering its use.

"It will age gracefully and tell its own story through its little dinks and subtle colour changes."

Perhaps the finest example of a bronze clad watch is the Panerai Bronze 1000 Meter Prototype. Developed in the mid-1980s under the watchful eye of Alessandro Bettarini, it was intended for use by the Italian Royal Navy, with the idea that it would be waterproof to 1000 metres whilst remaining easy to read and operate at these great depths. The entire case and bracelet was made from bronze and it featured four large screws bolted through the lugs fastening it all together. The dial was brass and it featured Panerai’s signature crown protection system, ensuring that there would be no accidental adjustment of the time whilst underwater. The watch was a purely functional item, designed with a job to do, yet today it has transcended this role and become an object of beauty, thanks in large part to the romance of the patina created by its bronze material. Whilst not quite as brutalist in design, Panerai still produce a bronze watch today, the Luminor Submersible 1950 3 Days Power Reserve Automatic Bronzo. Furthering the watch’s inherently nautical theme, the use of bronze is incredibly effective here, combining well with the dark green of the dial and the chunky brown leather strap.

Whilst Panerai have a history in producing bronze watches, what’s perhaps more interesting is the fact that certain brands are now turning their heads to the material despite having no previous association with it. Bronze is therefore officially a horological trend.

One of the notable bronze releases this year is the Oris Carl Brashear Limited Edition. A bronze version of the brand’s hugely popular Divers Sixty-Five, the watch pays tribute to Mr Brashear, the famous US Navy master diver. Oris have executed the watch perfectly, lending it a vintage feel thanks to its domed sapphire crystal, lollipop seconds hand and large circular hour markers. Out of the box its bronze case gleams with a reddish tint, yet over time it will take on a darker hue reminiscent of old fashioned bronze diving helmets. The most talked about bronze watch this year though is the Tudor Black Bay Bronze. Here the metal lends an exotic feel to the utilitarian Black Bay, a piece that's been praised for its humble, uncomplicated design. It'll oxidise over time, giving each watch a unique finish, which will surely appeal to the connoisseur, and the 3-6-9 dial is another point of interest. Bigger news though is the fact that Tudor have given it with an in-house movement, a first for a Black Bay and a great sign for the brand moving forward.

Bronze may not be the most obvious choice for a luxury watch, but it is certainly an interesting one. It divides opinion for sure, but when applied in a way that is both visually stimulating and authentic, as Tudor, Oris and Panerai have done, it offers up a tremendously compelling alternative to regular alloys. If you place value on heritage and individuality, then you may want to make like our ancient ancestors and enter the bronze age. 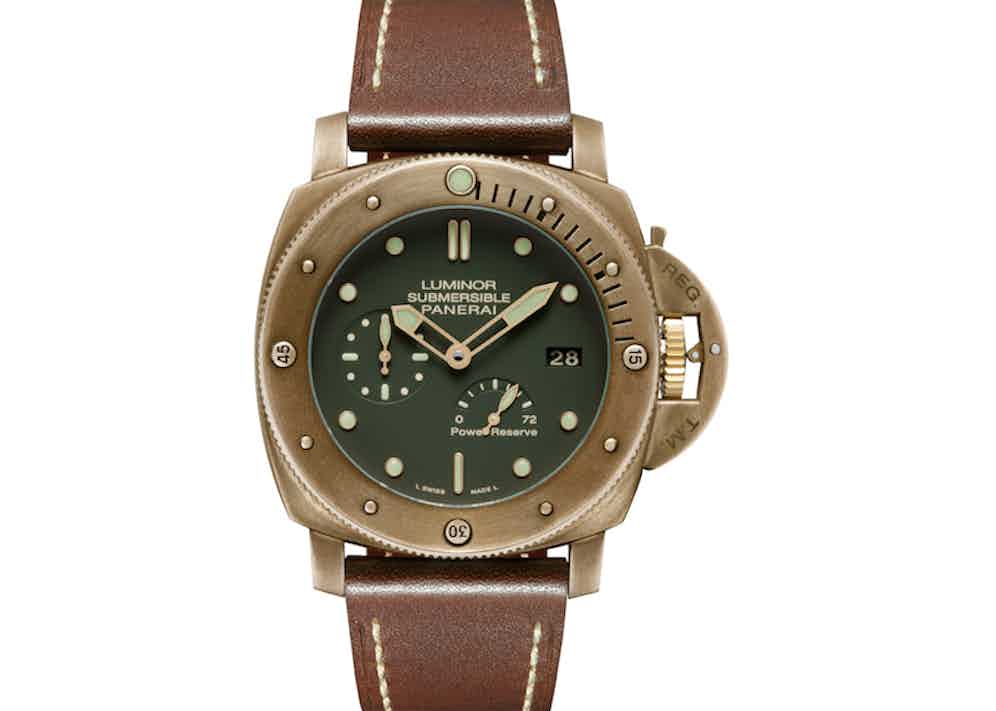 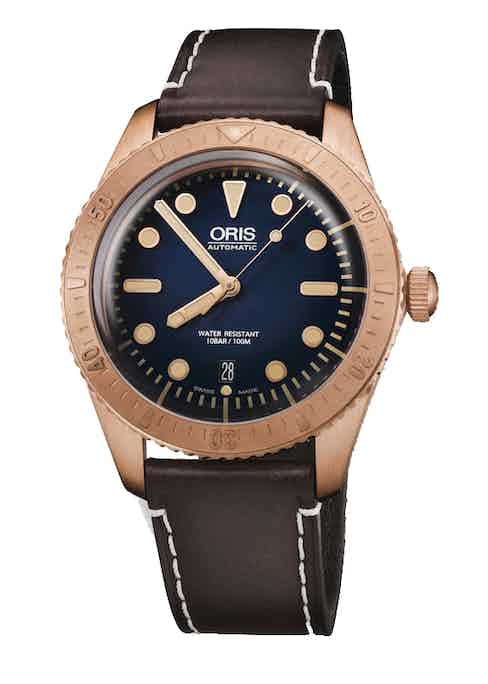 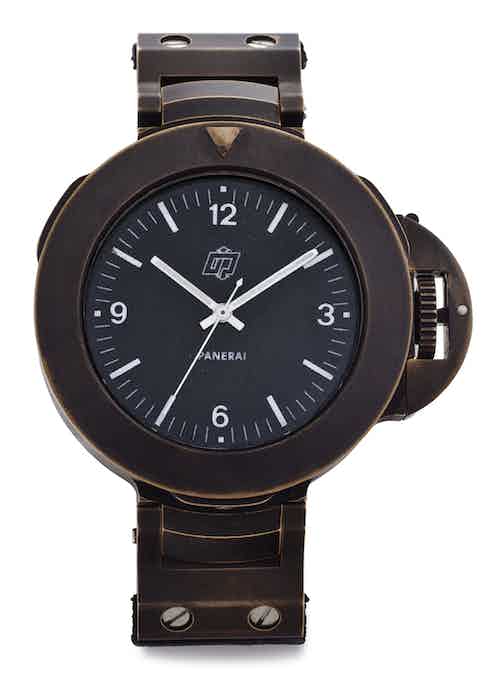