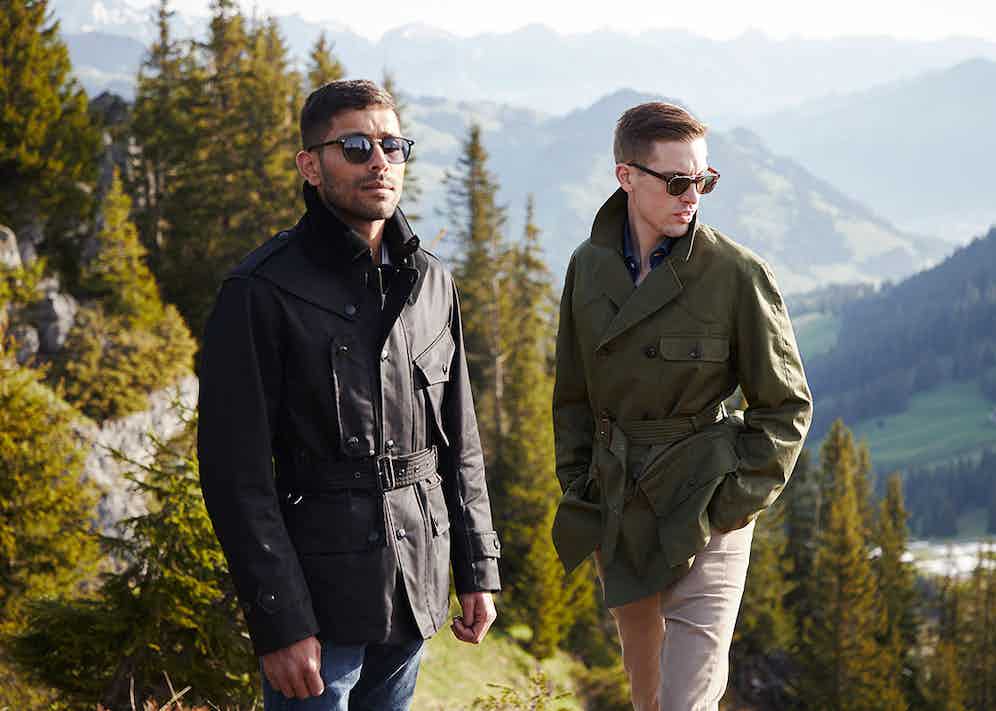 If you’re not familiar with Grenfell and the remarkable life of its valiant and honourable founder, plus the ground-breaking innovation of a little-known cotton mill in Burnley, Lancashire in 1923, it’s well-worth reading its historyhere.

The Rakehas long been a champion of Grenfell, and working with the team at its factory in east London has been an absolute joy; they have an open-minded approach to collaborations and bring new ideas into the mix in an effort to create something truly special and unique. For example, earlier this year the outerwear specialist took part in the Flâneur Collection, a four-way collaboration with three other artisans, all of which are leaders in their respective fields, which was spearheaded byThe Rakeand the hallowed family-owned mill, Vitale Barberis Canonico.

We've curated a capsule of Grenfell pieces that show the diversity of the brand, and recently took some of our favourite outerwear pieces, including a stunning four-pocket belted field jacket, for a test drive in Switzerland, where changeable weather posed little problem. That's not to say that Grenfell's classic coats are created solely for braving the wild - they are uniquely adaptable for all environments, not least the city, as evidenced bythe Mayfair coat. Exclusive to The Rake, it’s inspired by motorcycle styles from the 1920s - including the Despatch riders coat- and it’s cut down to the knees in navy Grenfell Cloth. The double-breasted coat features wide lapels, a double buckle fastening on the front and underarm gussets to aid movement. “It’s slightly less aggressive than the Despatch Rider coat and perhaps more civilian,” says Creative Director, Joslyn Clarke, who’s worked for several well-known British heritage brands and specialises in outerwear. It by no means needs to be worn whilst straddling a Harley and it comes with a detachable shearling collar in a sumptuous ivory tone. 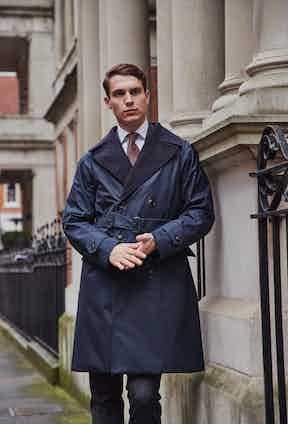 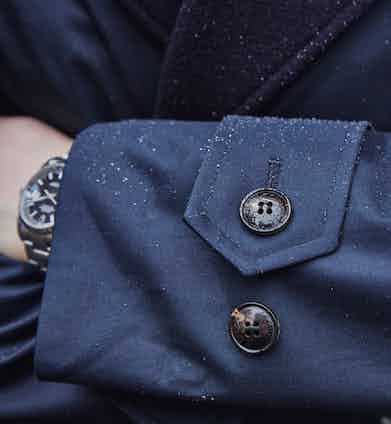 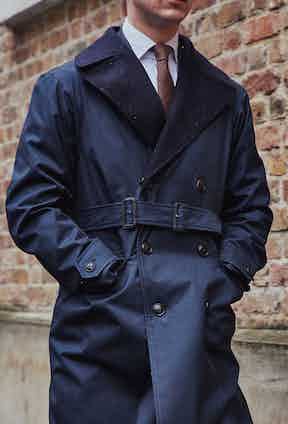 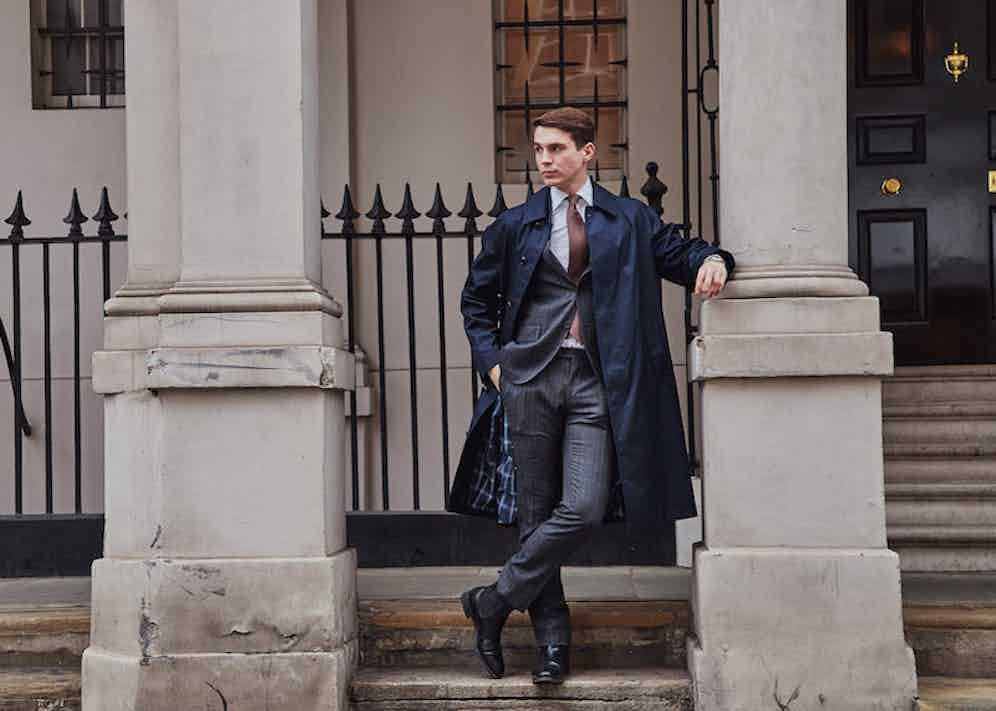 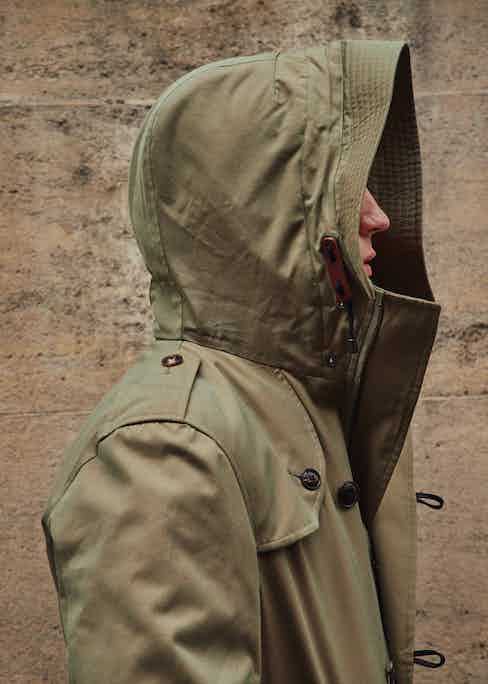 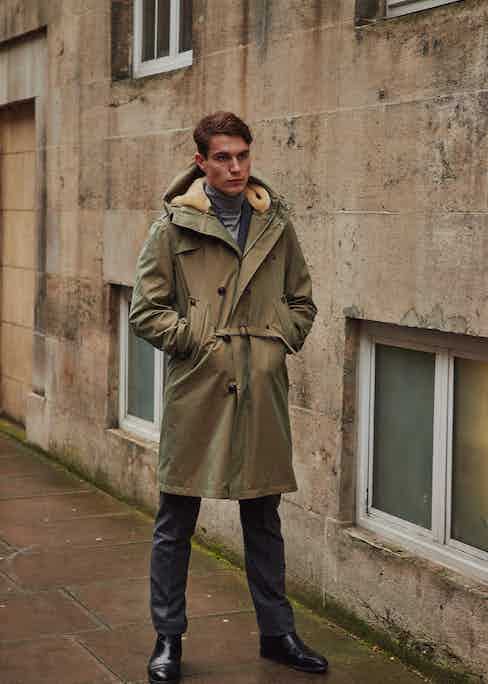 It goes without saying, but a reliable raincoat is a must-have in every man’s wardrobe and the Campbell, which takes its name from the extraordinary racing driver Sir Malcolm Campbell, is one of the Grenfell’s best-selling items. A classic raincoat with raglan sleeves, its notable features include a fly front and two large pockets on the hips. Instead of Grenfell Cloth, it’s cut from an equally robust cotton gardabine and is finished with Grenfell’s house check lining in 100% cotton that’s easily removable. Due to the raglan sleeves it will sit comfortably on top of tailoring and is the most formal addition to The Rake Atelier’s Grenfell arsenal.

The pick of the bunch is the Helvellyn, which is inspired by a coat Grenfell produced for Abercrombie & Fitch in the 1950s. It’s essentially the love child of two iconic outerwear styles that originate from the military: the mountain parka and the trench coat. Traditionally, a parka has a drawstring waist whilst the trench coat has a belt fitted with D-rings and a front buckle, so the concealed belt is a mediator between the two and is perhaps the most interesting detail. The Helvellyn still retains the parka’s hood which is lined with soft shearling, whereas the fishtail back has been left out and it’s cut straight along the hem. It still embodies the iconic design details of the trench coat, though - the gun flap on the right chest, shoulder epaulets and sleeve loops - whilst the typical raglan sleeves and double-breasted fastening have been left out. We’re unsure if we’ve ever come across a coat such as this, which Clarke refers to as “the perfect hybrid that’s a bit more contemporary.” It comes in a black cotton gabardine, which looks fantastic with a tonal ensemble, and an iridescent khaki that suits more rural surroundings. 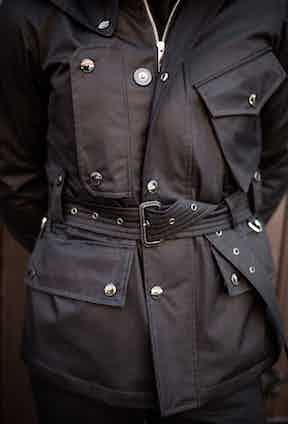 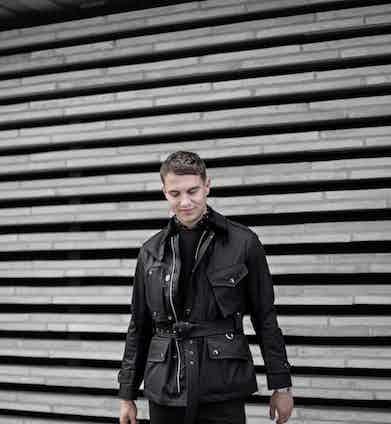 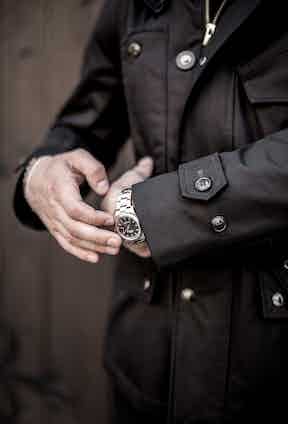 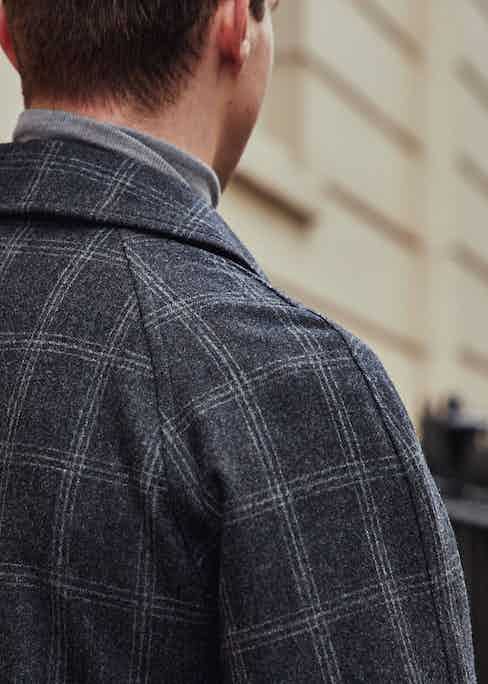 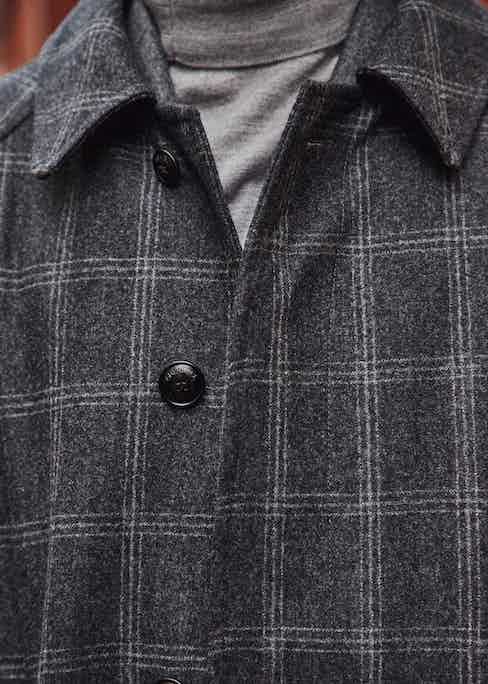 A Harrington jacket is another staple that every man should have in his wardrobe. Designed for golfing purposes, it’s perhaps one of the most iconic outerwear pieces for casual circumstances. Grenfell’s comes in a water-repellent Merino wool with the house check on the inside. Another staple is of course the double-breasted pea coat and Grenfell’s interpretation is acutely accurate to the originals and is made from 100% Merino wool. It’s then finished with metal naval buttons and leather trims on the pockets. The Grampian coat is ultimately fit for the countryside and is cut down to the thigh, fitted with hand warming pockets situated above the waist pockets and a corduroy, contrast collar. Finally, there’s a gilet in a wool/alpaca blend.

Overlooking the importance of reliable outerwear can be a costly error, and as Clarke aptly points out, outerwear is the bedrock of any collection. “With any designer, whenever you talk about a collection, people talk about the jacket. People don’t talk about the trousers or the shirt. They talk about the jacket and that’s what creates the main silhouette.” All of Grenfell’s collection is proudly made in England all under one roof by skilled craftspeople, many of whom have worked for the company for over 25 years. Grenfell’s collection is inspired by archival designs, and it’s this natural habit of dipping in and out of archive books to then create cool, contemporary clothing that positions the brand as a leader in the field of outerwear. 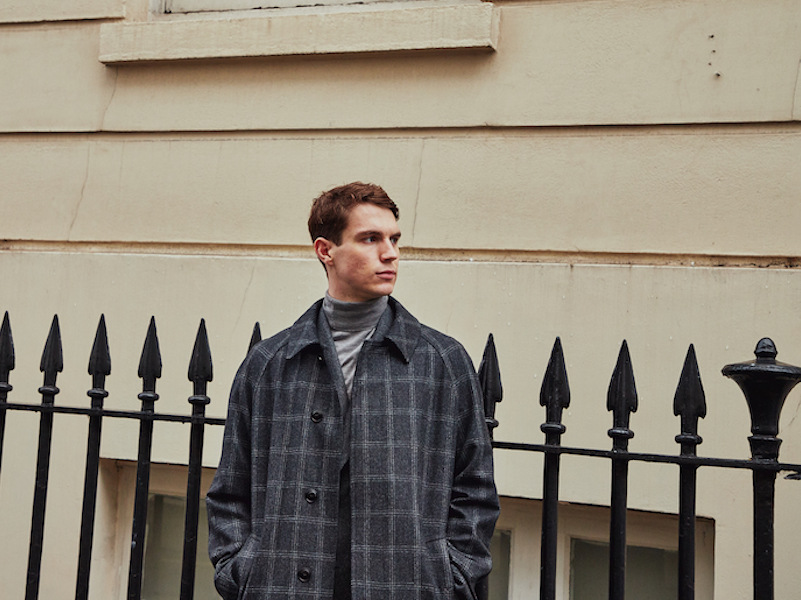 The Cavendish coat with its relaxed, soft-shoulder construction with raglan sleeves makes it an easy and comfortable choice. Photo by James Munro.