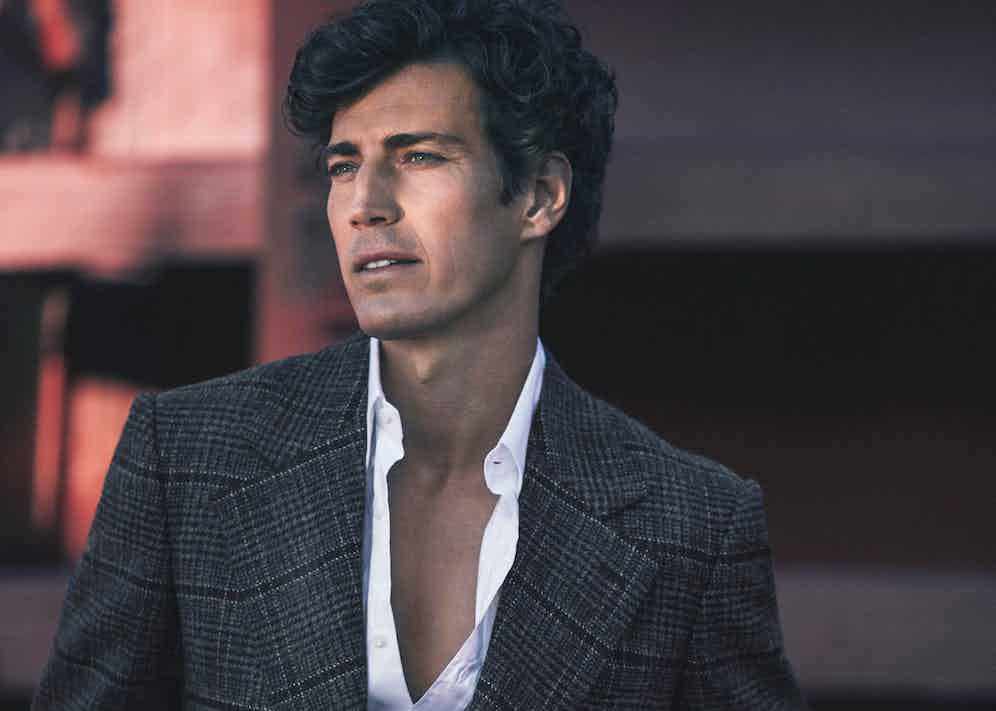 Allen Ginsberg’s poem Howl hits you like a concussive hollow-point double-tap to the soul. This is his paean and plea, his discourse and dogma cry out for insurrection and revolution, and it is set — and could only be set — in the greatest of all cities, the churning crucible of music, art, film and literature known as New York. Like Ginsberg, who commemorates this ultimate collision between high and low with, “angel-headed hipsters burning for the ancient heavenly connection to the starry dynamo in the machinery of the night”, a slew of literary greats have selected the throbbing concrete metropolis as their muse. From Fitzgerald to Anne Ryan to Salinger, Hubert Selby, Jr. to Mario Puzo, from Mark Helprin’s A Winter’s Tale to McInerney’s Bright Lights, Big City, New York has inspired innumerable efforts to perfectly encapsulate its eternal dynamism, its inimitable vibrancy and its extraordinary resilience. It is to New York that Savile Row tailors H. Huntsman — the legendary firm that has clothed the likes of Humphrey Bogart, Gianni Agnelli and Gregory Peck — and The Rake dedicate their latest collaboration, in the form of a capsule collection inspired by the city’s unmistakable, dazzling nocturnal skyline.

Campbell Carey, Huntsman’s Head Cutter and Creative Director, says: “Such is the vibrancy of New York and the multi-watt energy its night-time skyline emits that you can see it from space. And that gave us the inspiration for the centrepiece of our collection, a very special hacking jacket.” The idea was to take the traditional Huntsman tweed hacking jacket and transform it from something you’d wear in the country into the sexiest, louchest, boulevard prowling jacket that would be equally at home at a gallery opening or an elegant dinner. 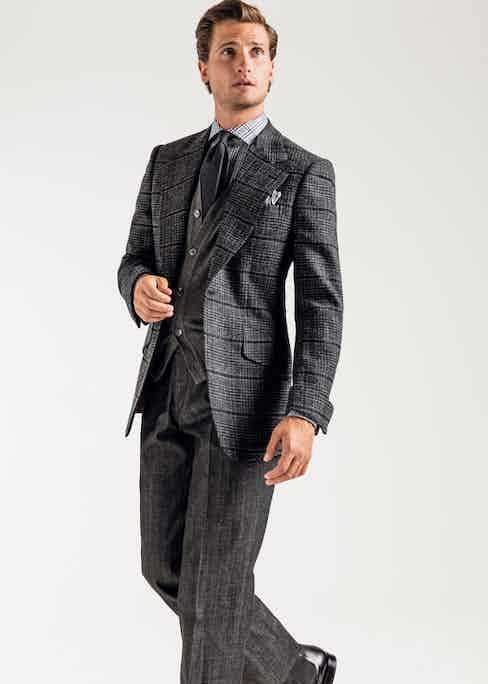 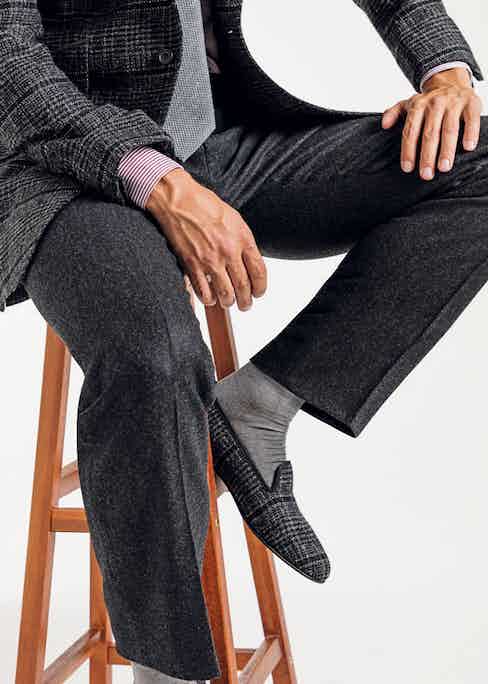 Together with Carey we imagined the type of tweed jacket you could rock up in to one of New York’s seminal nightclubs, from the Stork or El Morocco, where the Cassini brothers reigned supreme, to Nell’s or Au Bar from the eighties. The first step was to reinterpret the colour scheme of the tweed. Daisy Knatchbull, Huntsman’s P.R. and Marketing Manager, says: “We worked with Johnstons of Elgin, and they’ve been incredibly receptive to creating custom patterns with the understanding that the modern client wants something unique.” Carey adds: “We imagined New York’s night skyline punctuated with the skyscrapers glittering with light, and expressed this in a tweed pattern. While we generally don’t use black as a base of our clothing in this context, considering the inspiration, and because it was made to be the ultimate collection to be worn in New York City or any other urban epicentre, it became the natural choice.” Knatchbull adds: “It’s true that in England black is normally the preserve of eveningwear. But if you look at the Jazz Age in the twenties through to Tom Ford and the film industry today, American men — and in particular New Yorkers — wore a lot of black suiting and sportswear.”

The style of the New York hacking jacket, like the city that inspired it, is larger than life. Carey says: “The cut of the jacket is a tribute to the type of clothes made by our legendary head cutter Colin Hammick in the 1970s. The lapels are a little wider, the shoulder is that much bolder, and the flare of the skirt kicks out a touch more. Everything is larger than life, the way New York is larger than life. We’ve got the big pocket flaps and turnback cuffs, and we even decided to subtly pipe the pockets with anthracite suede to give that much bolder of an attitude.” The lining of the monochromatic masterpiece is the Huntsman house colour burgundy, a charming detail hidden from the scrutiny of the public eye.

Carey’s design genius doesn’t stop with the jacket. He explains: “We definitely wanted to incorporate the idea that this jacket could be dressed up with a pair of charcoal flannel trousers or dressed down with our very first pair of tailored black denim pleated trousers. We played with the idea of echoing the vertical lines in New York’s iconic skyscrapers, such as the Chrysler Building, by extending the line of the pleats all the way through the waistband.” So as not to interrupt the clean extended line, Carey replaced the trousers’ side adjusters with one large adjuster on the back.

For shirting, Carey selected two colourways, a decidedly Jazz Age-like black checked shirt, an homage to Harlem in the 1920s, and a stunning house burgundy stripe. Looking at the way New Yorkers wear their neckties, Carey made the decision to use only subdued matt-textured knit ties. He says: “These are the ties that modern New Yorkers wear — the type of tie that is not part of a business uniform but a conscious expression of modern style. They are light, soft and comfortable, making them the type of accessory you keep on or even decide to put on when you step out at night.” Examining the way New Yorkers live also gave Carey the idea to add one essentially fall-winter garment: the sleeveless knit waistcoat. He explains: “New Yorkers walk everywhere. The jacket on its own is a pretty hardy garment, perfect for walking in fall weather through the streets and avenues for extended periods, and even across Central Park. But when it gets a touch cooler, the soft-knit waistcoat is the perfect light accessory to add the additional level of warmth.”

Taking the New York concept to an even more elevated level of expression are two amazing accessories. The first is a stunning rich silk pocket-square printed with the map of Manhattan island in the same black, grey and opalescent pearl tones as the hacking jacket. The second is a pair of evening slippers rendered in the same New York tweed as the jacket. Says Huntsman’s General Manager, Carol Pierce: “These slippers were made at the request of our bespoke clients who wanted to have a bit of fun by pairing them with their tuxedos. Last year our owner, Pierre Lagrange, had a bit of an accident on his Harley-Davidson and injured his foot. He could only wear soft shoes during his convalescence, and he started to wear the tweed evening shoes out. Everywhere he went people asked him about them, and so we decided to produce a small, limited run to complete our New York collection.” 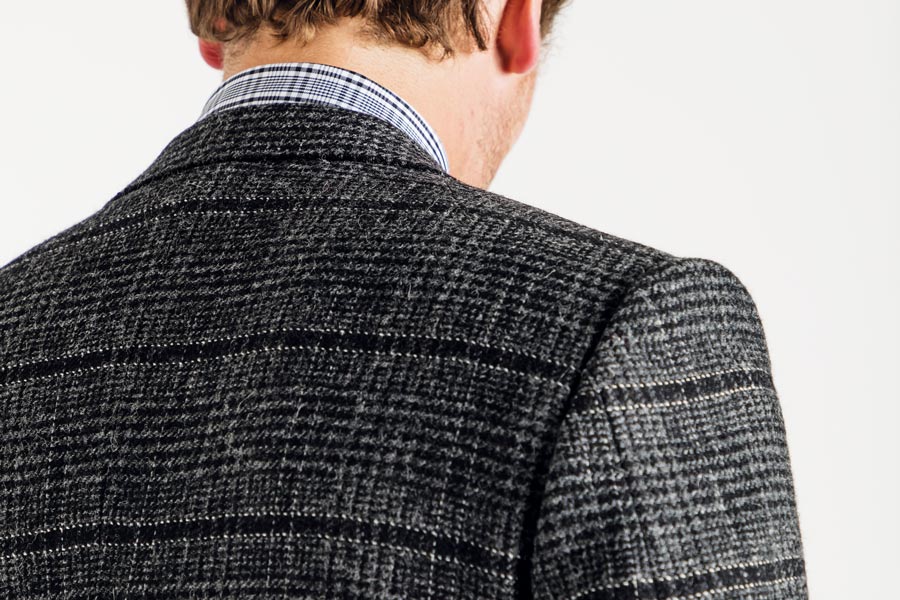