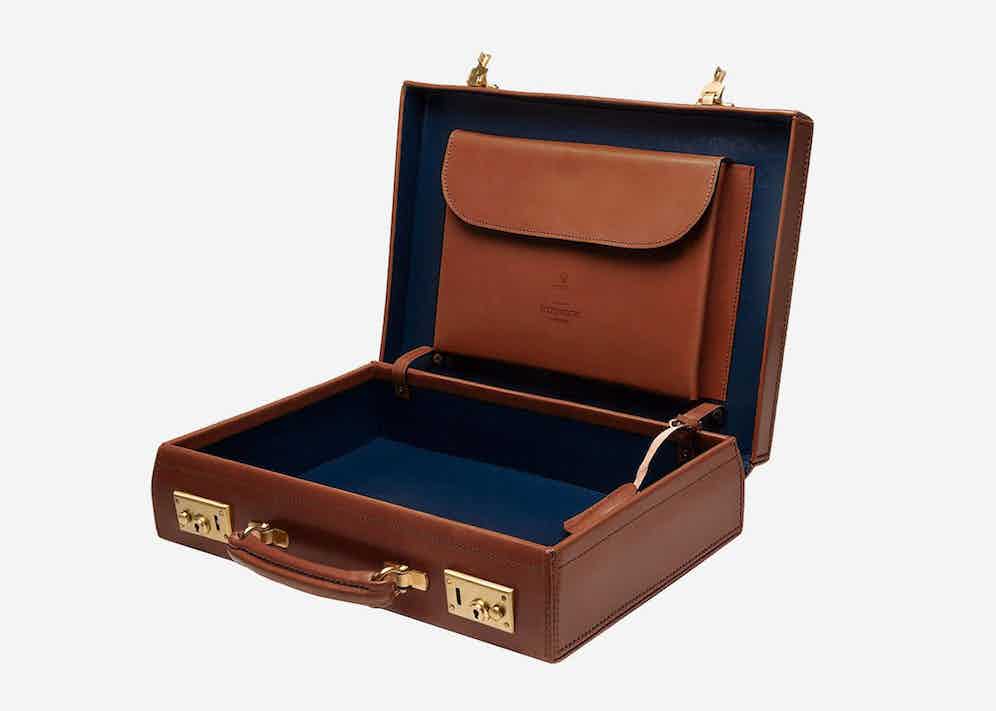 What do smoothie machines, foosball tables, sleep pods, arcade games, treehouse boardrooms and beanbag-filled creative labs with native Indian wisdom emblazoned on the walls in soybean ink have in common? They all feature in the kind of offices occupied by companies who think the word ‘agency’ carries heft, and to which employees expect to turn up to work on a skateboard and still command a six-figure salary.

It was arguably technology that saw briefcases dip in popularity — iPad, tablets and laptops being better suited to supple bags, carriers and rucksacks, while straps leave the hands free for the perpetual clamping of smartphone to lughole. But if the trendy infantilisation of the workplace that’s run synonymously with the digital revolution leaves you cold, a highly stylish antidote is a classic, rigid briefcase, an item once gripped in the hand of almost every man travelling to work, and now enjoying a renaissance not only for men on the commute but in casual contexts as well.

We can think of no better way to take part in this welcome resurrection of the briefcase’s popularity than this attaché case from Ettinger, which does accommodate the needs of the digital age thanks to its large slip pocket fitted on the inside of the lid plus several smaller slip pockets. The case is modelled on a unique attaché case made by Gerry Ettinger, who, in 1934, founded a brand whose craft and construction credentials have earned it a royal warrant from H.R.H. the Prince of Wales. Ettinger’s prototype was slightly smaller than usual, to make it less unwieldy, but still large enough to hold all his normal paperwork. That original is now owned by Gerry’s son Robert, who helms the brand, which speaks volumes for its durability. The modern versions, which are made to order, are similar in size — customers, the brand says, simply find the smaller, lighter frame much more user-friendly — and fashioned from traditional English nut bridle hide leather. That lining, meanwhile, is a beautiful, long grain skiver leather in blue. Those who acquire one can look forward to the gradual formation of a natural patina, just one of the many ways in which this will become more attractive, more personal, more unique as the years pass.

That, surely, is the key criterion for any investment that is more personal in its nature than financial. And if you do use it for work, it’s also a small investment in the reversal of the corporate world’s regression to youth club culture.