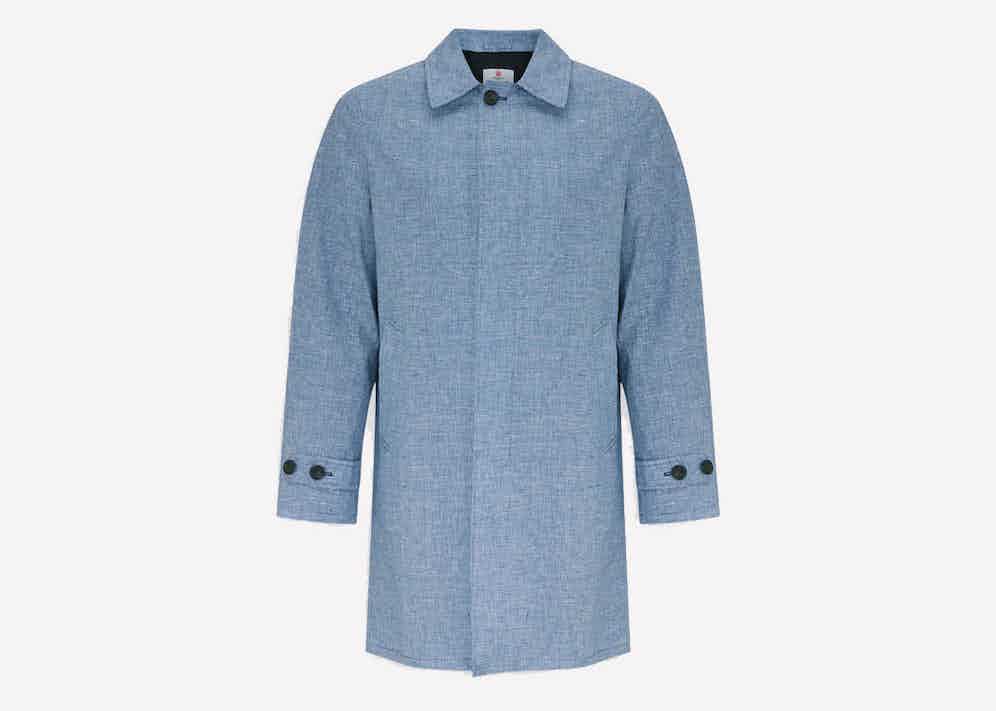 Now, let’s not kid ourselves, though we are all desperately praying for a spot of sun after several months of desperately depressing, almost vampiric weather, the reality is that for many of us, balmy days are bound to be few and far between. Pessimistic though this sounds, it does have its good points - chiefly that the inevitable onset of spring showers yields the opportunity to experiment with some of-the-moment technical outerwear.

It is fortunate then, that on it’s irrepressible mission to spread the captivating tendrils of eccentric English style across the four corners of the globe, Turnbull & Asser has turned it’s ever-creative eye towards raincoat territory, in just the nick of time. New for SS16, the Flordon Mac is a contemporary, enjoyably quirky raincoat rendered as a classic single-breasted mac, with a tall revere collar, fly front, unstructured silhouette, single vent and buttoning cuffs. Dean Gomilsek-Cole, Turnbull’s Head of Design, explains his thought process thus: ‘The classic mac is an iconic British staple, but there are so many variations that it’s difficult to envisage how to make such a piece unique.’ Not that this has stopped him. The Flordon, though based on a classic silhouette, features a rather original take on shower-proof cloth. Gomilsek-Cole explains: ‘I wanted to create something that was lightweight for the season, packable, but most importantly I wanted to create something that is different from the sea of beige, black and navy offerings that already exist.’

Essentially, aiming to retain the mac’s functional silhouette and with weight also a key issue for spring/summer, Gomilsek-Cole knew he needed a seriously lightweight, breezy summer cloth. Linen it had to be then, and in collaboration with an Italian shirting mill, Gomilsek-Cole had a water-proof technical coating added to the back of one of the house’s exclusive shirt fabrics; an elegant micro-houndstooth in soft blue and white. Brilliantly, the cloth maintains it’s summery quality, whilst now feeling thoroughly functional as a rainproof, featherweight overcoating fabric. Made-up in Turnbull’s Northampton-based outerwear workshop (returning the story back to British manufacturing, naturally) the result is a suitably soft, easy-wearing spring/summer mac with real integrity.

As Gomilsek-Cole quips ‘now walking in the rain doesn’t seem so bad.’ We couldn’t have put it better ourselves.