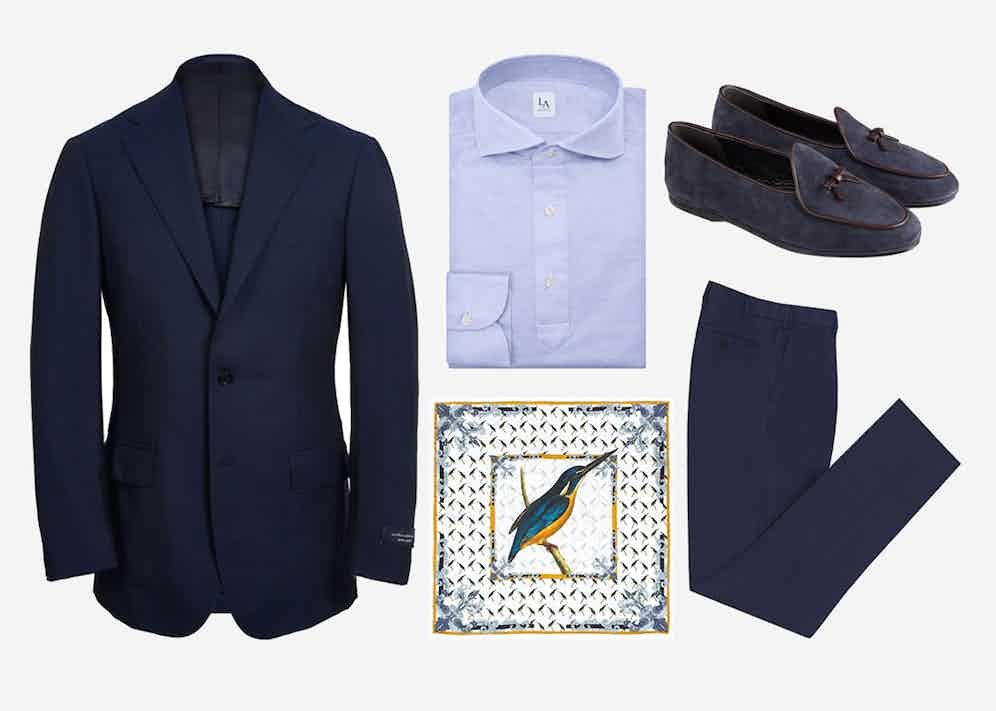 Although it's a perennial wardrobe colour, blue feels particularly relevant for spring, when the air is fragrant and the sky seems more vibrant than usual. Whether you're planning a holiday or simply need a work wardrobe update, these pieces will ensure you do so in true, blue style.

My twin brother was the blue twin, and I was the red one, so a general shift towards his appointed colour palette initially felt like treading on his turf, pissing on his lamppost etc. But over the years, the level at which I cared about this has abated the more I have seen how well it works as a colour. It is the trusty old friend of a colour. So much so for me that my tailor told me how boring I was for only wearing navy. It sunk in only to a certain extent, as when the online team suggested that blue was the theme for this week, I knew where I’d go with it immediately. These three are specifically a nod to the sunshine deciding to show his face to us in London recently, reminding us that spring has sprung and that a summer wardrobe is required.

It’s an overused cliché that blue is the most versatile colour available in one’s wardrobe, but it’s true. Despite Elvis’ best efforts, blue is not often utilised in the shoe department, so why not buck convention and go for a deep midnight blue loafer for the warmer months to come? This pair is unlined and made from a beautifully soft grained leather, making them extremely comfortable. They are surprisingly easy to wear and will combine well with navy chinos and a white, long-sleeved polo shirt.

You could call it boring, but blue – in its varied shades – is a universally complementary colour. Who doesn't suit navy? Or a soft eggshell? Unlike other hues, no one would bat an eyelid if you were to assemble an entire blue outfit, too – like this Ring Jacket two-piece navy suit with Luca Avitabile's jersey polo shirt. Offset it with a patterned pocket square and some smart black loafers.

Now that spring’s here, it’s time to pull out those functional, lightweight and incremental-weather-defying pieces from your wardrobe. Safari shirts are the perfect replacement and are good to go from spring to early autumn. Marol’s expression is simply incredible, which is what you’d expect from the Bologna-based artisan, as it’s constructed entirely by hand with neat box pleats, a one-piece collar and in a cool linen-cotton blend. I’d keep the look casual and opt for a simple white T-shirt beneath, either from Naked Clothing or Falke, and also keep the blue tone going with a pair of high-waisted linen trousers from Anderson & Sheppard. Well-made, simple but effective clothing. You really can never go wrong with a navy ensemble, too.