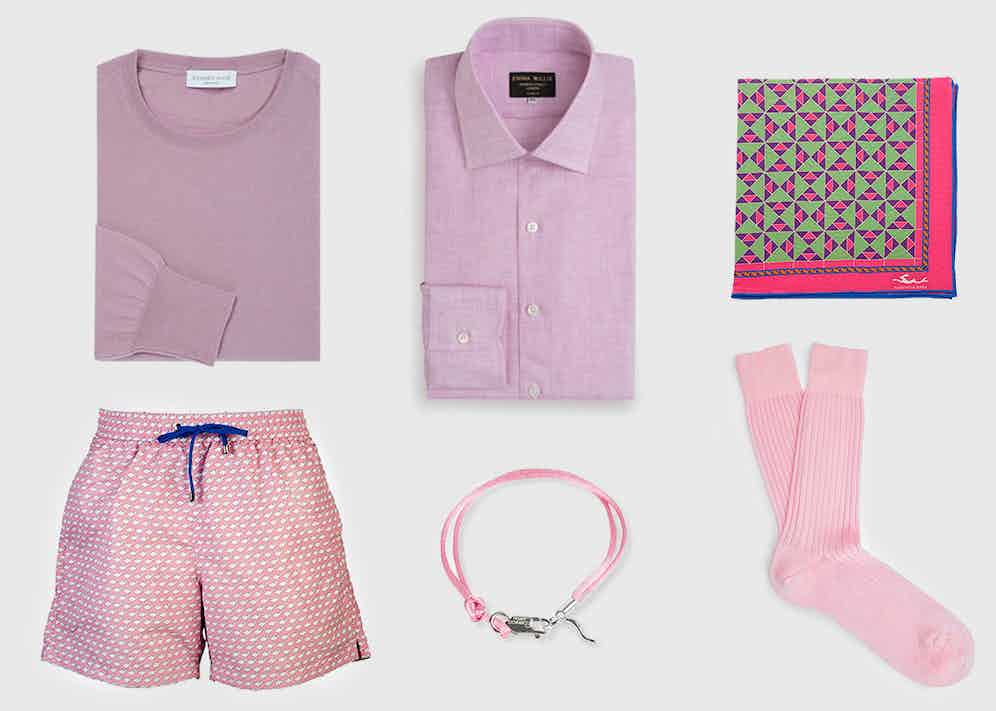 If the colour pink was an uptight, righteous millennial (there are other varieties of millennial, we’re told), it would be livid at the gender stereotyping it has been subjected to over the years. Firstly, going back to the early 20th century, it was most definitely the preserve of the boys - baby ones to be exact. But then the American marketing machine decided that it was better suited to girls and who was going to argue with Don Draper’s mob? But in recent years, pink has broken loose from its gender shackles, reinventing itself as a hue every bit as masculine as any shade of blue (aforementioned millennials even have a shade of pink named after them). It’s an impactful shock of a colour, which when used correctly can brilliantly break up neutral tones, as The Rake’s editors will now show you…

Look at the latest issue of The Rake, out today. One of my favourite images is that of our Rake-in-Progress, Tom Payne, wearing a dinner suit with the flourish coming from a pair of pink socks. The juxtaposition of tones is more complementary than jarring and proves how pink can be extremely rakish. Pink is really easy to wear – it can be rich, light, exciting and perfect for the season. The secret lies in the colours you pair it with. Light grey is much better than navy blue for example. I would suggest that you pick one pink item and build an outfit from there.

Were it not for a concerted ad campaign in the US in the '50s, we would not be discussing how to wear pink like it were some scar that needs to be delicately concealed. The fact is, pink is an exceptional colour for men, particularly in the summer when our collective skin is literally radiating. It can be vibrant or soft, smart or louche, dressed up or dressed down - it really is that versatile. Wearing pink casually is easiest, but I prefer to make a punchier statement by incorporating it into a more structured summer look. Emma Willis's pink linen shirt is the perfect shade and texture to contrast Richard James' smooth cream single-breasted blazer. That alone would suffice for many, but then who wants to be in the many? The simple addition of Augustus Hare's pink, purple and lime mosaic pocket square makes you one of 'the few'.

As the wise musician Janelle Monae sings, "Pink is the truth you can't hide", and for the sake of being transparent, I think everyone should embrace this most versatile of colours. If you’re not usually one for vibrant hues, opt for a pink that’s more dusty than bright – like this Richard James crew neck jumper – which will slip seamlessly into a neutral wardrobe. Wear with some high-waisted trousers and accessorise with something deep and rich – like this chocolate brown Frank Clegg backpack.

For me, less is certainly more when it comes to sporting pink. I don’t have the cohones nor the clout like Lapo Elkan, who can pull off a bespoke baby pink linen suit from Rubinacci with such panache that no one dare question him. As such, when and if I do wear pink — you’ll notice from this column that my picks are either navy or black — I try to keep it under the radar. Socks are perhaps the obvious choice, but if pink is in so is 'man jewellery', which is one area of my wardrobe that I'm slowly but surely building. Rubinacci's silk bracelet comes with a cute sliver of silver coral, which is a Neapolitan good luck charm. I’m also into pleated trousers at the moment – they’re far superior to their plain, boring cousins and a penny loafer, well, needs little justification. Pair these three with a white linen shirt from Santillo 1970and you're good to go.

Pink: a colour with a controversial past has disseminated into the realm of menswear, bringing with it a degree of masculinity. If you still aren't convinced, then the beach is the best place to tackle peach and Belsire’s fish printed swim shorts are the ideal guise. The pattern sounds gimmicky, but on closer inspection, it is subtle and refined. When opting for something slightly more garish it’s best to tone it down with classic neutrals. A pair of barely there Manebi La Havana espadrilles in this subtle stonewash hue should pare back these bold and brilliant shorts. Complete with a pair of summer classics courtesy of Ray-Ban.