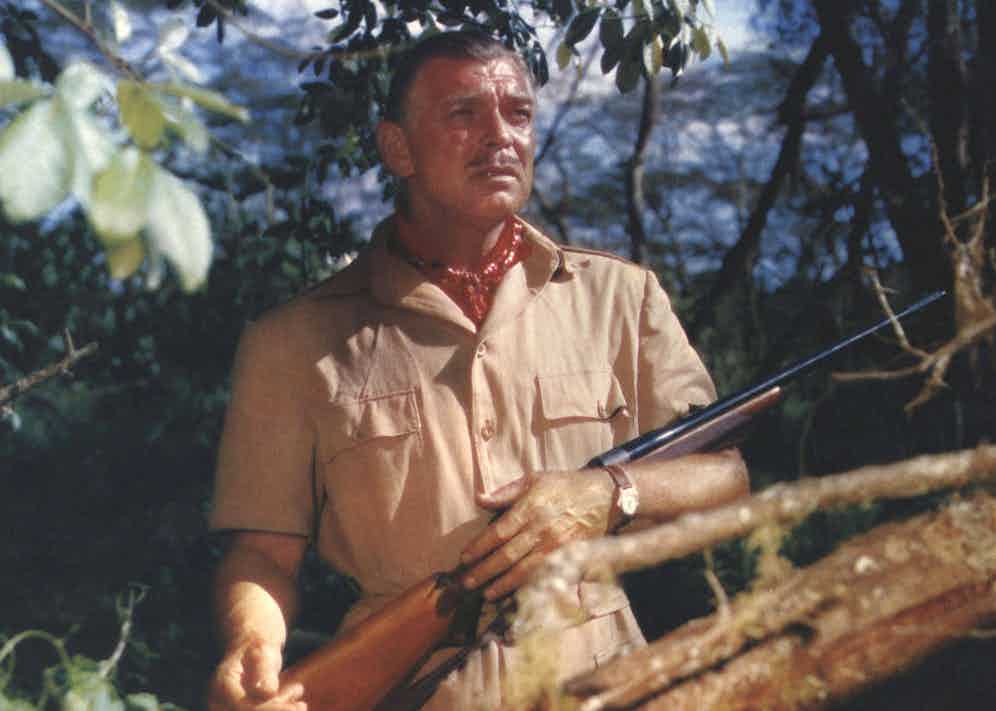 It’s a little bit disconcerting how many staple menswear garments were born from the human being’s desire to kill. It’s no secret that many of the most widely worn men’s clothes first originated in the military: the pea coat, thebomberjacket (the A-1,A-2, G-1, MA-1 and the rest), the chino trouser, the parka, the list goes on. Yet it’s not surprising this is the case when you think about it. Clothing worn in combat needs to be useful. It needs to help the wearer and support them in their quest for survival in the field. It’s a matter of life or death, which is one of the reasons why the military, particularly the US and British Armies, have developed some of the most purposeful clothing of the 20th century - in order to avoid the latter and prolong the former. It is killing of another kind though - specifically the hunting of big game throughout the early 20th century - that gave rise to one of the most adaptable pieces of clothing: the safari jacket.

As its name suggests, the safari jacket was intended for use on safari in the African bush, with the term first cropping up in the mid 1930s. It can be traced back further than this however, to the Khaki Drill uniforms of the British Army, first introduced in 1900 when troops were stationed in South Africa during the Second Boer War. These soldiers required lightweight, breathable clothing that wouldn’t weigh them down in the heat, so their uniforms were made from khaki cotton drill and generally featured four large bellows pockets on the chest and waist, a large shirt collar, shoulder epaulettes and a belted waist. Although not exclusive to the Khaki Drill uniform of this period, after all, these features are emblematic of the US Army’s M-1943 field jacket that came along later, the Khaki Drills marked the first time this specific pocket/epaulette/belt combination was utilised, and it was wildly effective.

It’s not hard to see why. For one, the bellows pockets increased carrying capacity tenfold, the wide collar sat happily spread across the chest, helping with cooling, and the belt around the waist ensured everything stay put, which came in handy when trekking across unruly terrain. All of these attributes were benefits of the safari jacket too, when it first started appearing a few decades later. It’s unknown who made the first jacket, but the style was a clear evolution of the British Khaki Drill uniform. Some early safari jackets altered the design slightly: the shoulder epaulettes were removed, offering a cleaner, more civilian approach, and the belt was crafted from the same cotton drill as the body of the jacket, as opposed to the stiff leather belts tied around the waist previously. Comfort was of as much importance as practicality. The jacket was first adopted by well-to do men and women from western Europe who were seduced by the idea of gallivanting across Africa and subsequently contributing to the endangered species list. The jacket’s cavernous pockets were useful for carrying bullets and knives, but there was also plenty of room for binoculars, maps, rollable wide-brimmed safari hats as well as a cigar or two. 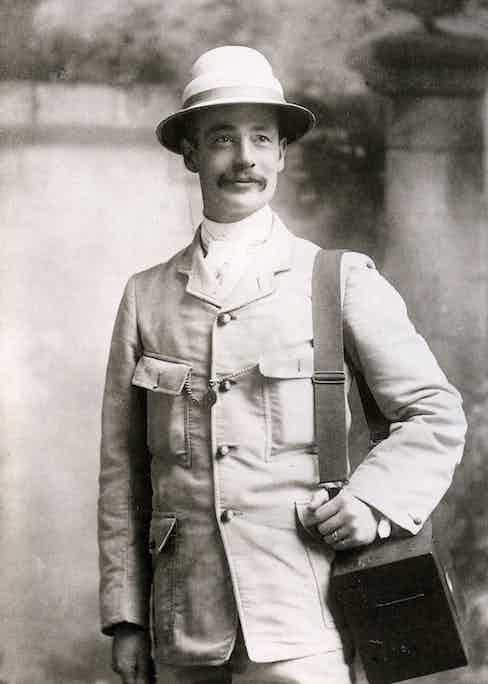 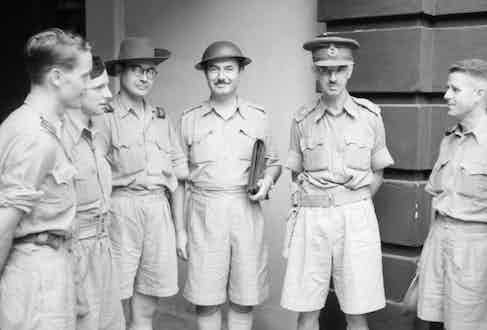 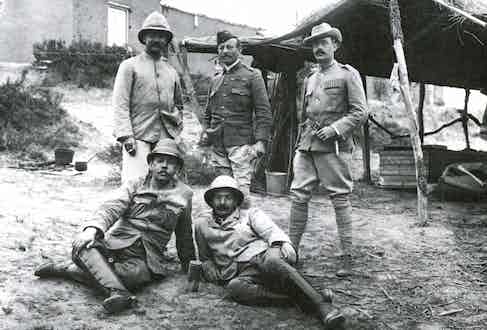 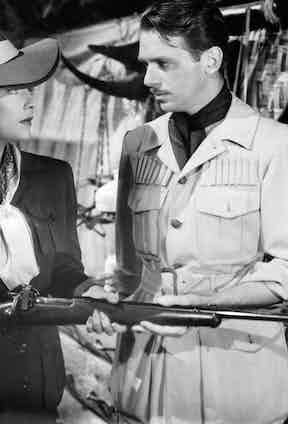 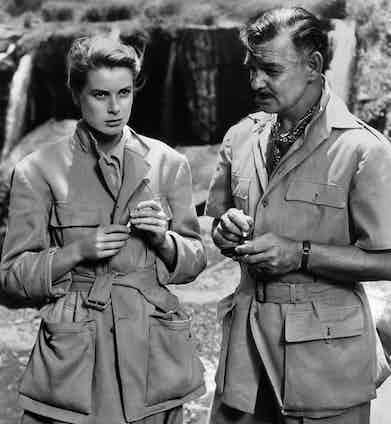 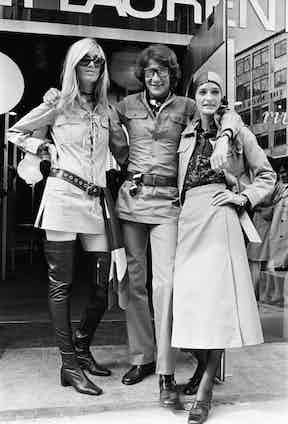 ErnestHemingwaywas a particularly famous arbiter of the safari jacket. Travelling to Africa as early as 1933, he adopted the style loyally, displaying its rugged appeal in the numerous images of him crouching proudly over his prey. He had his jackets made by Abercrombie & Fitch, who, far away from their tepid image today began life as an elite outfitter of sporting and travel clothing. In an advertisement from 1939, during the time Hemingway was a loyal customer, A&F described its safari jacket as ‘made from an imported English, cotton drill material that has been “Cravenetted” to shed rain. Of very tough substance, practically untearable, yet soft and pliable. Has a smooth, suede-like finish. Excellent for lightweight, summer wear. Colour is sand khaki.’ 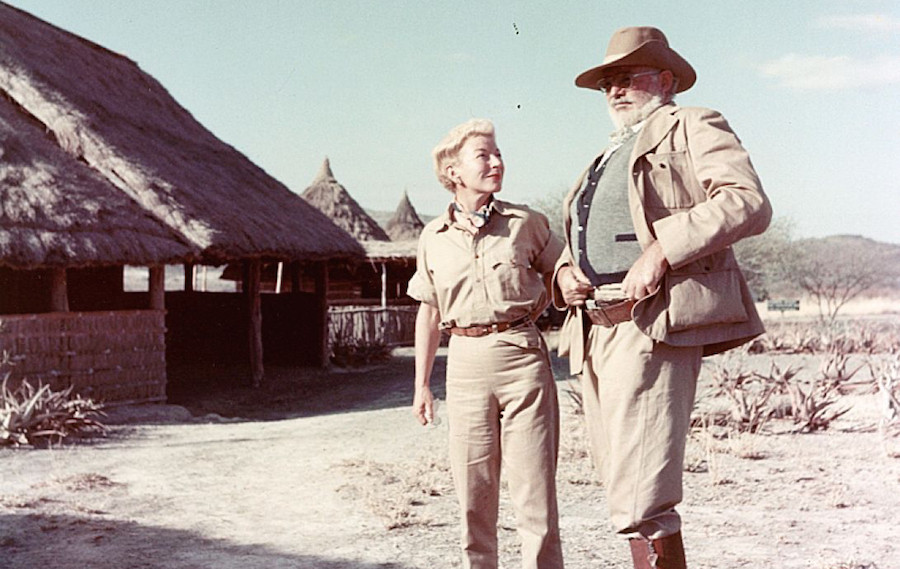 Ernest and Mary Hemingway on safari in Africa, circa 1940s.

It wasn’t until the 1940s and ‘50s though that the safari jacket got its big break. Clearly attracted by the inherently rugged, masculine appeal of the jacket and its connotations of adventure and travel, Hollywood began to dress its leading men in the style. The usually suitedDouglas Fairbanks Jrwore his with a fetching cravat in 1940’s aptly titled film,Safari; Gregory Peck looked sultry in safari in the film adaptation of Hemingway’sThe Snows of Kilimanjaroin 1952; and Clark Gable owned his in 1953’sMogambo. This cinematic period gave the jacket a brief glimmer of the limelight, before the style was perpetually thrusted into public consciousness byYves Saint Laurent, when he dropped his African themed collection in 1968. He dressed his muses Betty Cartroux and Loulou de la Falaise in his safari creations too, simultaneously showcasing the jacket’s versatility as well as its ability to look sexy, a notion that contrasts heavily with the jacket’s gritty roots in the bush.

Two more contemporary icons synonymous with the style are HRH Prince Charles, and the late Sir Roger Moore. As befitting of a Royal of his stature, the former, Prince Charles is just as at home in his bespokeAnderson & Sheppardsuits, as he is on the continent in a time-beaten safari jacket. Despite being one of the most photographed men on the planet, the nonchalance he consistently exudes whilst wearing either style is quite staggering. The latter, however, is quite simply the king of safari jackets. Sir Roger Moore wore safari clothing in five James Bond films, as well as 1971’sThe Persuaders, a 1965 episode ofThe Saintand 1980’sThe Sea Wolves. If you want classic safari inspiration, look no further than this most quintessential of English gentlemen. 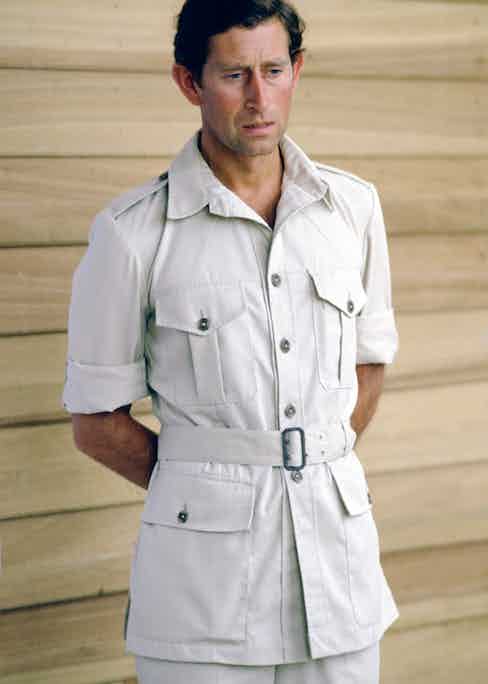 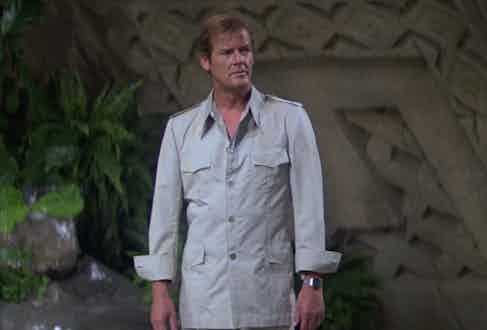 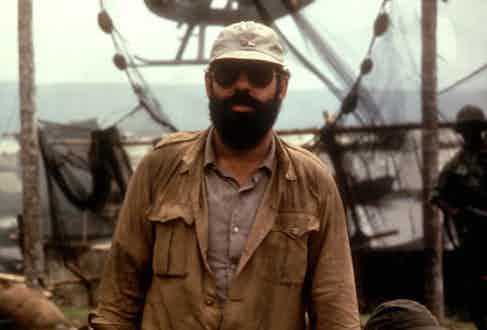 Despite its rich history, the safari jacket is more relevant today than ever and it has confidently transcended its previous life on the savanna. It’s a credit to its fundamental design that the style is able to successfully straddle both the opposing worlds of fine tailoring and streetwear. Private White V.C. lies somewhere in the middle, and the brand’s creative director Nick Ashley is a passionate advocate of the enduring nature of the style, as he tellsThe Rake, it “will always be stylish because it is so practical. Tough natural fabrics, earthy colours and loads of pockets mean that whoever wears the stuff will always be well-covered and all the bits and pieces will be safely stored; this is the beginning of cool.” 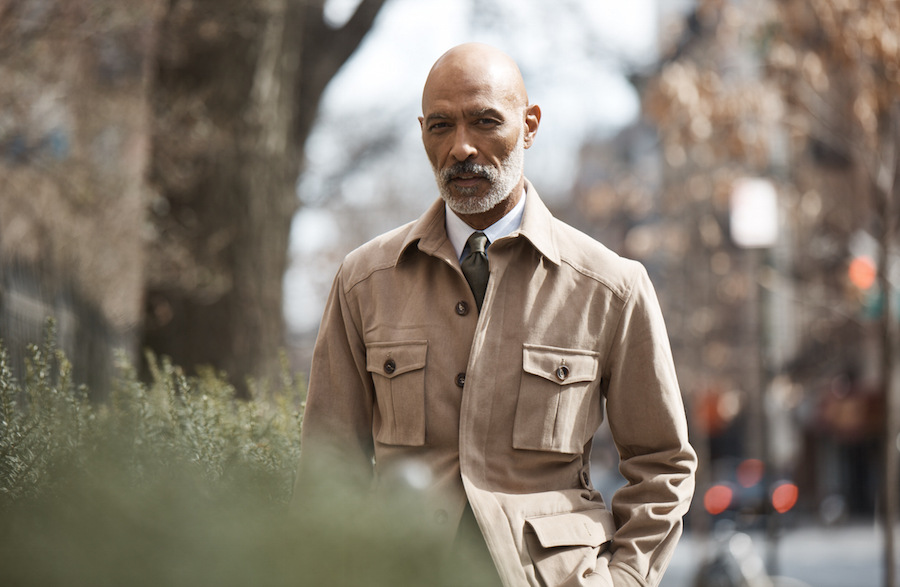 Prince Charles’ tailor of choice, Anderson & Sheppard, produces an exemplary jacket replete with a total of 15 pockets for ultimate adaptability when on the move. In an interesting move the house has even changed the name, calling it a ‘Travel’ jacket, hinting at the potential for urban wear. Manager of the brand’s haberdashery, Audie Charles describes the motivation behind the design: “the cloth used is plain and simple. It’s durable and adaptable in different weights and lends itself to a working garment. There are cloths for every climate. I think the safari looks best when it has lived a life. It’s timeless and has proved itself over many a decade.” Exploring the tailoring potential of the safari jacket further though is Tokyo-based Bryceland’s & Co, who offers a made-to-order jacket cut from iridescent Solaro, the lauded warm beige herringbone wool fabric woven with red yarns on the underside, giving it a unique sheen. Most impressive on this particular jacket though is the half belt and military inverted back pleat, which increases ease of movement and is an exceptional display of craftsmanship.

The safari jacket is one of the most versatile outerwear offerings available today. No longer viewed as a garment worn purely by the wealthy elite, it has, like many of its military cousins, surpassed its origins and become an important sub-genre in contemporary menswear today. Whether you’re looking for an alternative replacement for the traditionalblazer, or you want a lightweight jacket you can throw over a white T-shirt and jeans, the safari jacket is a viable option that will only get better with time. Here are three ways to wear it…

From left to right: Look 1: Casual - Olof Nithenius wearing a prototype creation designed by himself and made from Fox Brothers cotton twill. Note the pairing of the beanie and canvas backpack, which complement the soft, unstructured nature of the jacket. Photographed by Milad Abedi; Look 2: Smart Casual - Jean Baptiste Rosseeuw wearing a traditional safari jacket replete with a relaxed cut, shoulder epaulettes and belted waist. When paired with a sharp oxford shirt and slim black jeans, the jacket perfectly bridges the gap in-between dress codes. Photographed by Robert Spangle; Look 3: Smart - The Brycelands & Co creation, cut from Solaro wool. Stripped of all non-essentials, this jacket works as an effective replacement to a blazer with its slim, tailored profile, yet it still maintains all of the storage abilities of the classic safari. Photo by Ethan Newton.