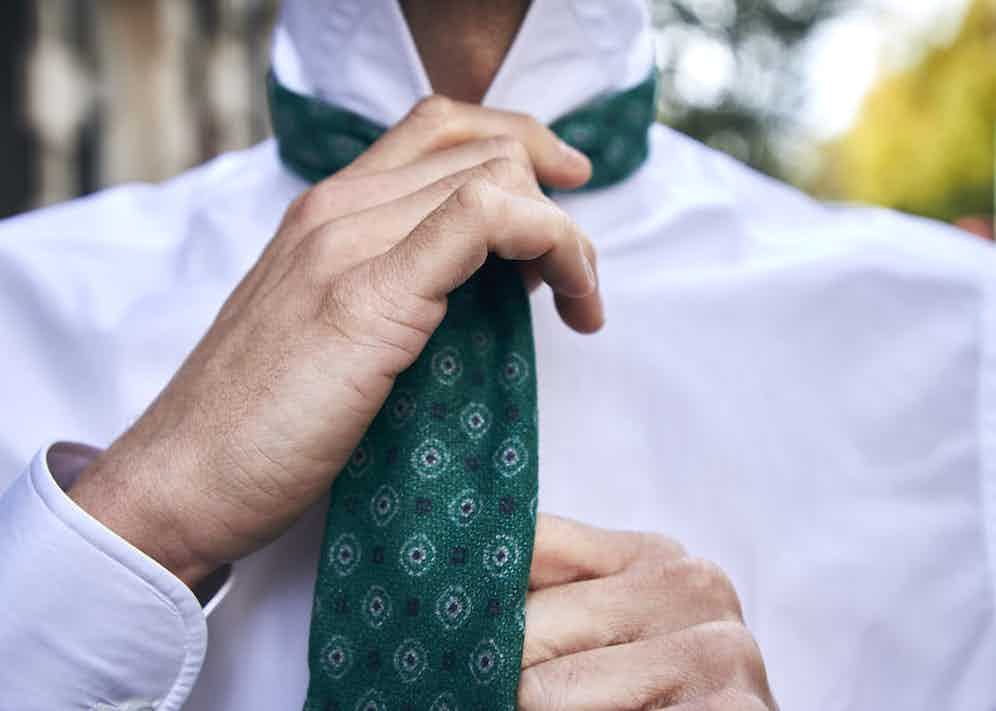 I started my career in menswear selling ties in Selfridges. It was a huge department on the ground floor and we sold a lot of ties. It was not uncommon for the tie department to take more money than the neighbouring shirt department. And this was just ties… no bows, cravats, scarves or cummerbunds. We had customers spending hours browsing through the rails of brands on offer, from Charles Hill and Michelsons to Ferragamo and Valentino. It was the era of the ‘designer tie’ and they were considered status symbols. Harrods had a similar department. It’s hard to imagine any contemporary store devoting a large area of premium retail space to such a small accessory.

Apart from the shell fabrics, which were mostly 100% silk, there was little difference in the shape or construction of the ties. The width of the blade varied between 3” and 3.75” and this was connected to the underside by a third piece of narrow fabric called a neck or gusset (no sniggering at the back). They were generally cut on the bias to allow them to hang straight and usually had a wool interlining. The better ties were handmade and boasted a slip stitch running through the entirety of the neck tie – a loose piece of silk thread allowing the tie to retain its shape after wear. The tipping of the tie (the lining on the underside of the blade) was usually in a branded viscose jacquard in a tonal shade. This style of tie is known as a ‘lined three fold’. 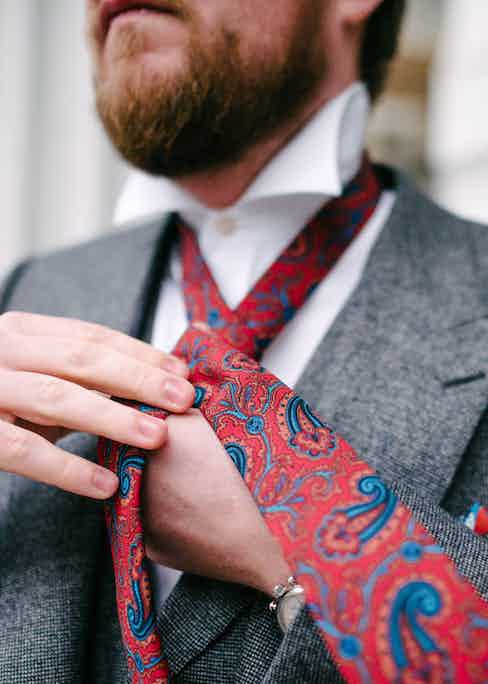 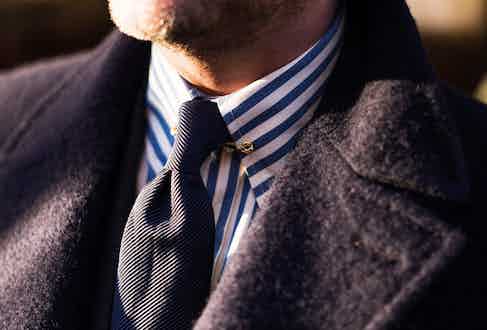 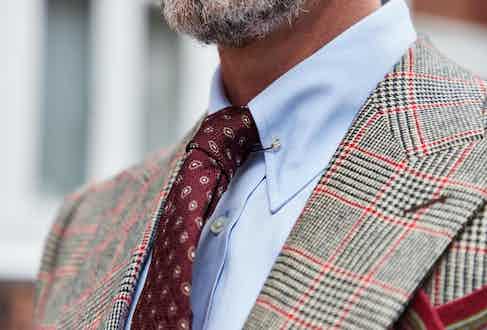 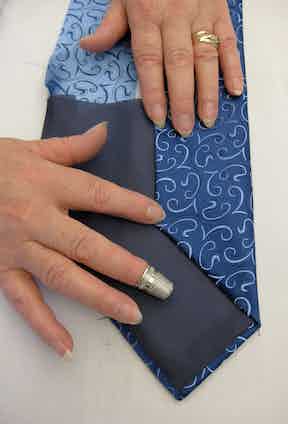 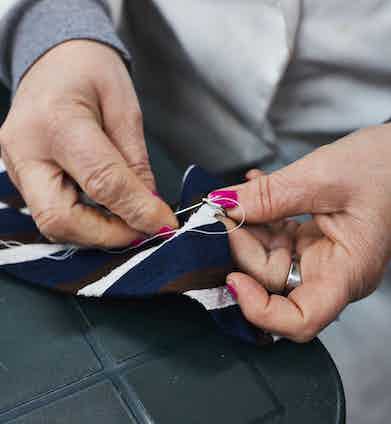 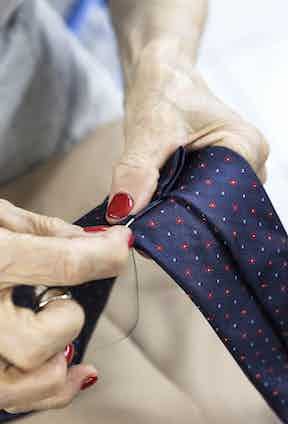 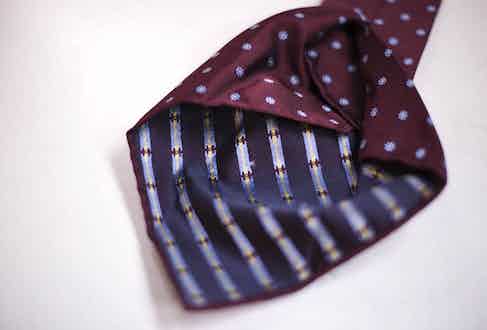 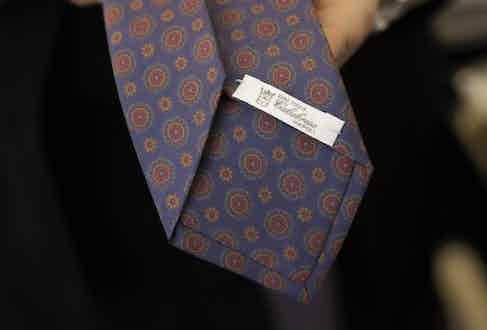 Nowadays, ties are often self-tipped, where the tip is made from the same material as the shell. This is more expensive as it increases the consumption of the silk. Drake’s, the London-based haberdasher, is well-known for offering untipped ties. Like unlined tailoring, they are actually more expensive to execute as the absence of a lining requires more sewing. All Drake’s ties have hand-rolled edges, similar to a quality pocket square. They offer the perfect degree of formality to match soft-shouldered jackets and have an easy elegance.

Untipped ties often have a degree of ‘show-through’ at the blade that is a subtle indicator that the wearer is a clothing enthusiast. TheEdward Sextonfine grenadine tie has no tipping or interlining. “It is just silk and air”, explains creative director Dominic Sebag-Montefiore. Woven exclusively in Como, it is constructed in a seven-fold style where the bulk of the tie is created by using extra shell material that has been – you guessed it – folded seven times. They are made in two pieces and require significantly more silk per tie as well as specialist sewing skills. They tie a beautiful knot and drape scarf-like across the wearer’s chest. Never wear a tie-bar with a seven-fold tie but allow it to flow naturally and easily. Not all fabrics are suitable for a seven-fold construction and Sexton also offer silks, wools and linens in the self-tipped three-fold style. Ties can also be made in five-fold, eleven-fold and, I think I saw this at Pitti, fourteen-fold styles, but seven is the number that is synonymous with this type of make. 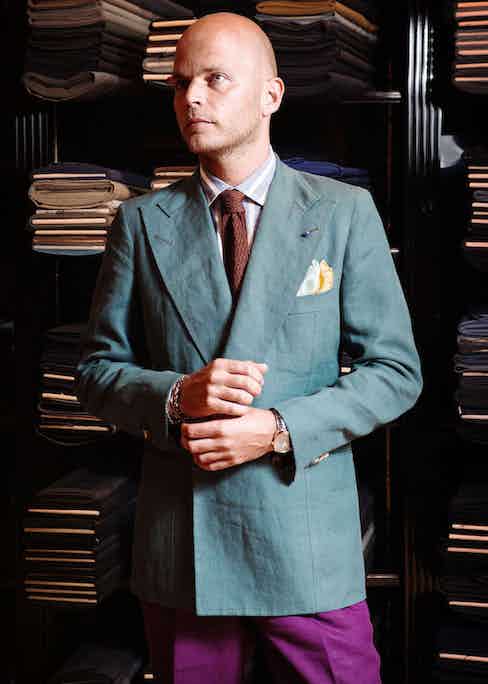 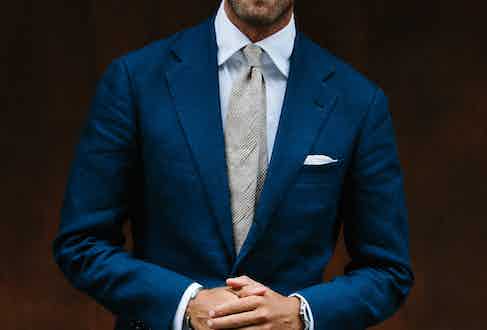 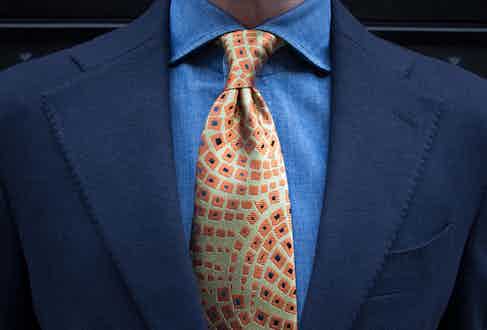 The great sartorial houses of Naples are famed for their seven-fold ties that are both labour and skill intensive.Calabresewas founded in the 1920s by a tie enthusiast and sources the finest silks that are hand-sewn in its own factory. Similarly, Francesco Marino creates ties that are often untipped with hand-rolled edges, using methods passed down through the family.

Luca Rubinacci of Neapolitan tailors and clothiersRubinacciis justly proud of his seven-fold ties as they are all made on double-printed silk. To print on both sides is expensive and luxurious when you consider the amount required to make a single piece. They also add a small piece of natural horsehair canvas to the neck of the tie, which does not add bulk but rather guarantees the formation of the small pleats beneath the knot.

If you have never tried a seven-fold or untipped tie, I would recommend it as it is a relatively inexpensive way of adding some true luxury into your wardrobe. They are also superb for adding a little sophistication to less-formal combinations of soft collared shirts and knitwear. I would also urge you to become more seasonal with your ties and wear cashmere and wools in winter and cottons and linens in spring and summer. Charvet is renowned for its vibrant patterns, while Turnbull & Asser has created ties worn by the likes of James Bond.Anderson & Sheppardhas an excellent selection of seasonal neckwear and the house also offers some great advice on selecting a tie. Tony Brand of its Clifford Street haberdashery asks two key questions: “Does it tie a great knot?” and “Do you like it?” 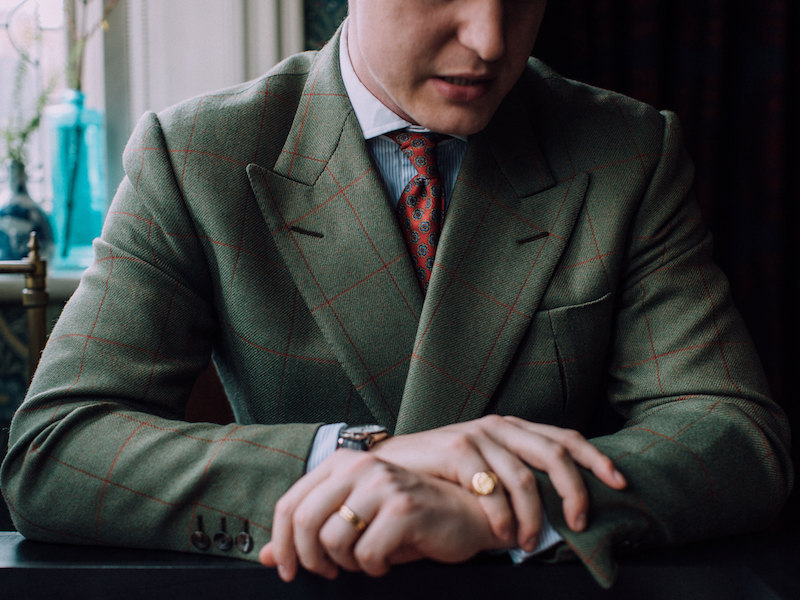