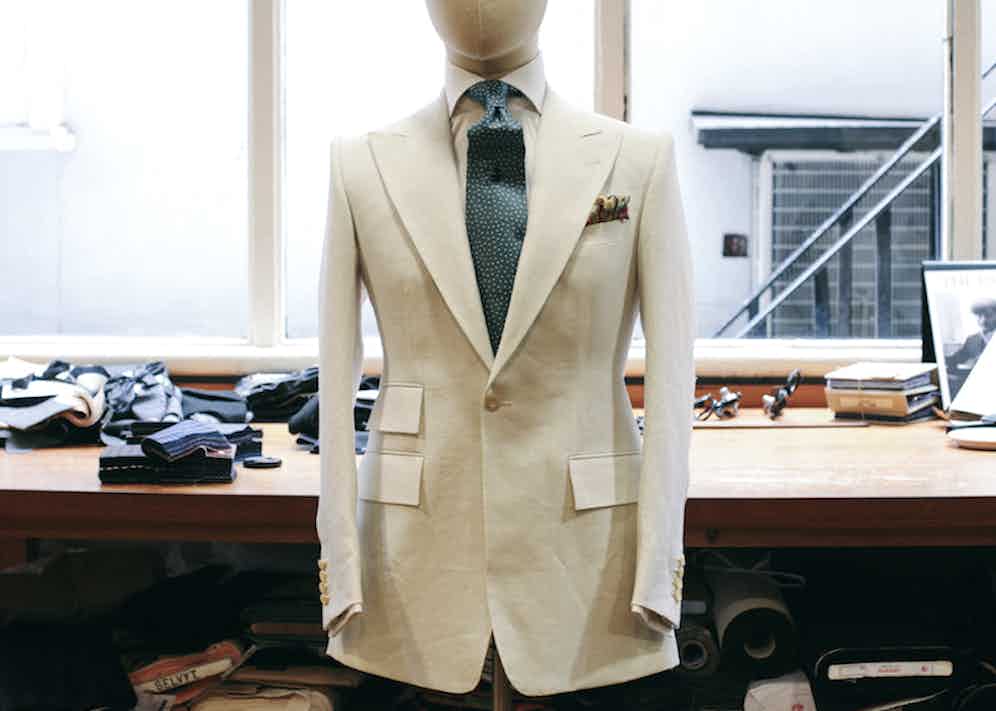 Readers might recall that a couple of weeks ago we published a story on The Rake’s undying love for the white suit, particularly during the summer season. Therein, we reflected upon its long and romantic history, the pitch-perfect sense of composure it brings with it and its gorgeous iridescence; exploring how it has been continually championed by the most inspiring dressers on stage and screen for the best part of a century.

What we didn’t discuss was its inherent and unrelenting lack of practicality. True, slip on an exquisite white summer suit and it’ll almost certainly make you feel like a cross between John Travolta in Saturday Night Fever and the Arch-Angel Gabriel, but let’s face it, if you do anything other than stand still in an air-tight space with it on, you’ll regret it. Eating in it is a terrifying business, using the dusty, gum-strewn seats on public transport is mental torture and even attending garden parties or the polo will have you perspiring with hyper-tension as you dodge waiter after drinks-tray bearing waiter.

And yet, even in spite of all this potential peril, you want one don’t you? I mean look at this thing. It’s glorious – a suit so pure and poised that it's practically Viagra given tailored form. It’s the kind of thing that you’ll absolutely love wearing twice a year and then enjoy just staring into your wardrobe at for the rest of the time. In short then, the sheer sense of joy and unrivalled sexiness that owning a white suit brings with it far outweighs the fact that it’ll be a nightmare to take care of, so permit us to suggest where to go to commission the most satisfying white linen suit you’ll ever own.

The place in question is supreme-structuralist and Savile Row cornerstone Chittleborough & Morgan. Owned by Head Cutter Joe Morgan, a sartorial ‘eminence grise’ in his own right, the house is known for creating tailored menswear in the highest tradition of British bespoke. Indeed, its work is closer to couture than bespoke as Morgan and his collaborator, esteemed Cutter Michael Browne (who cut the suit pictured by the way), will work with clients to conceptualise the perfect suit for your lifestyle and personal requirements – refining its proportions over an average of five fittings to a milimetrically perfect exoskeleton. The result will be an architectural suit with a strong chest; exquisite loose-lapped seams down the sleeves and through the centre-back (the likes of which most tailors will quake at the prospect of replicating), a sharp roped shoulder, slim waist and long flared skirt.

It’ll challenge the preconception that a linen suit is best cut unstructured, and it’ll make for a garment so shapely that it’ll transform the man in the street into a veritable Adonis the second he slips it on. It will feel thoroughly dramatic and will amplify that sense of glamorous ‘badassness’ that the white suit at its best delivers. It’s a suit for champions and we urge you to invest in one, even if you'll seldom wear it. 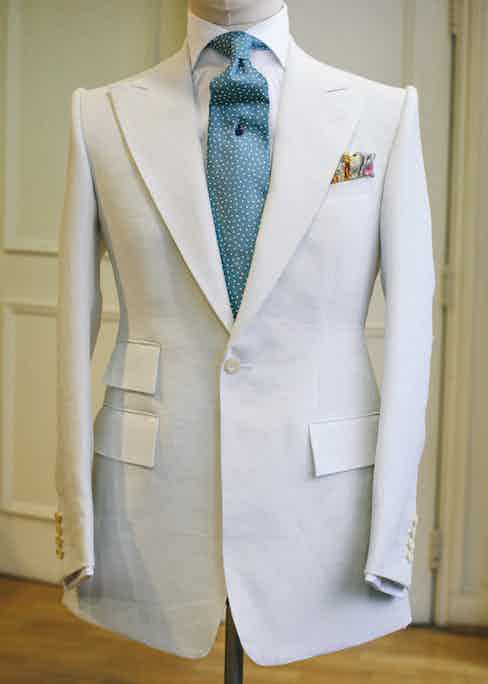 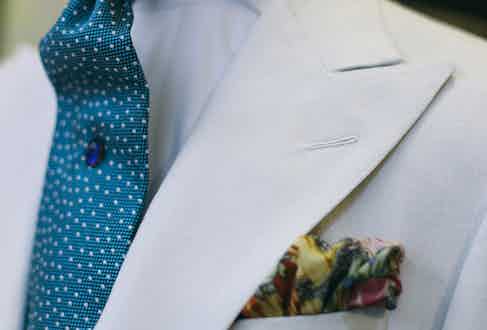 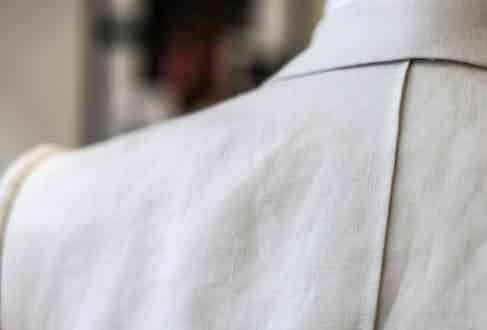 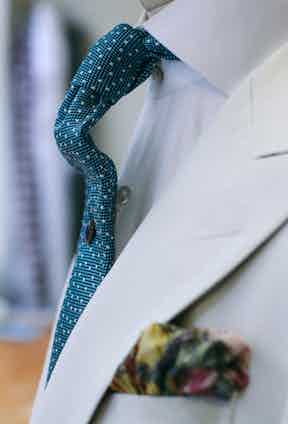 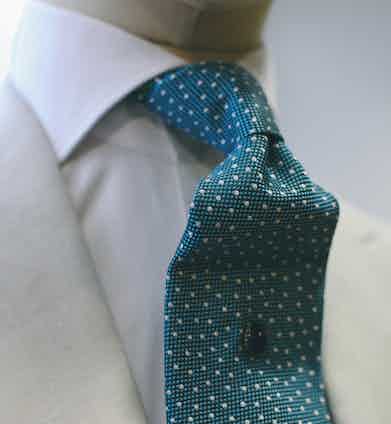 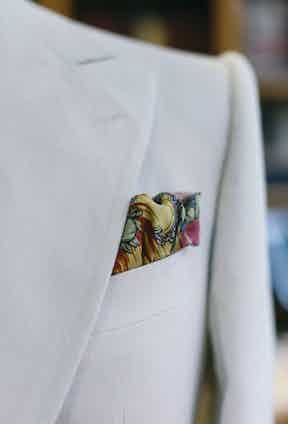 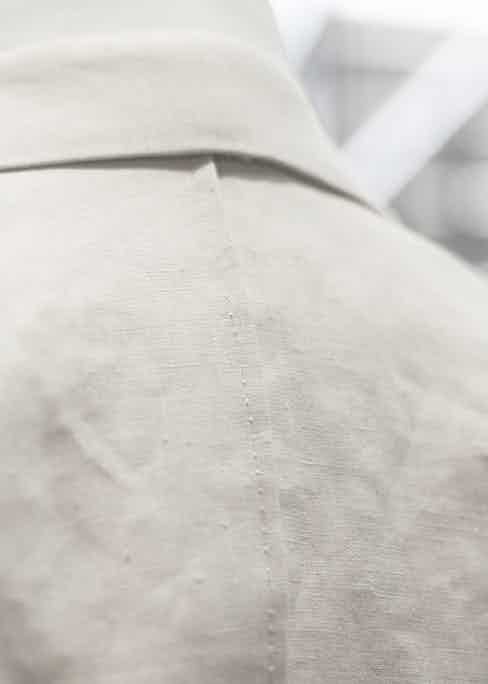 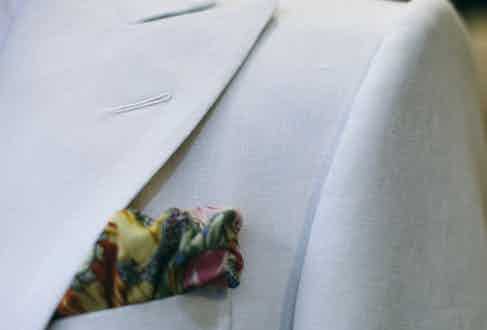 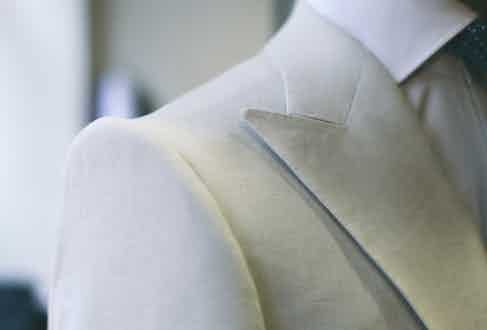