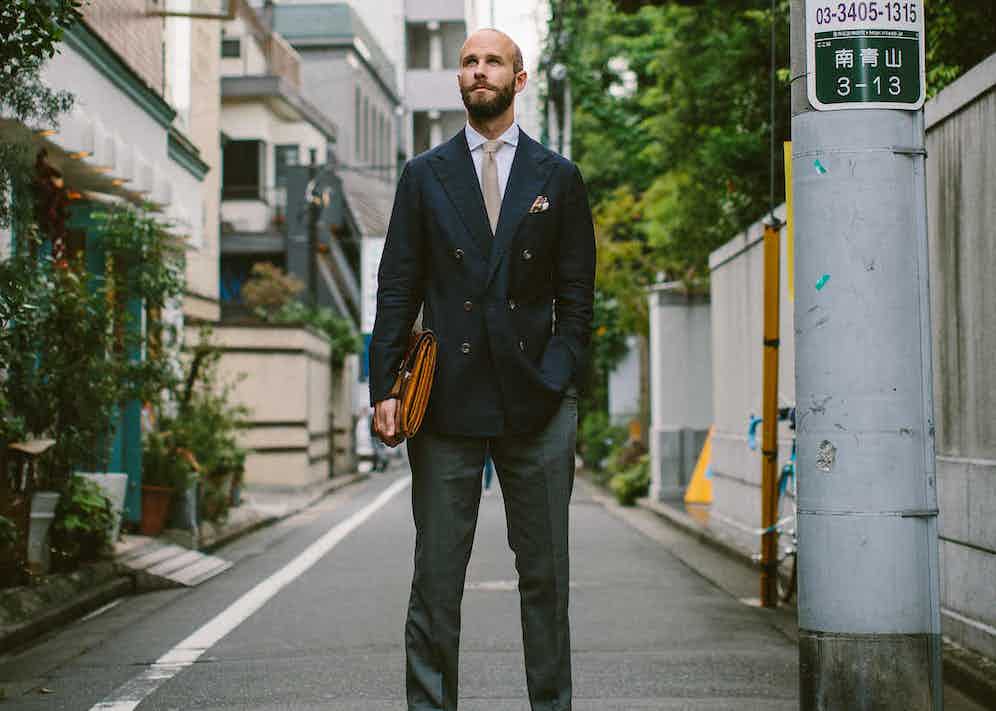 Simon Crompton and Jamie Ferguson, both dear friends and regular contributors to The Rake, are a formidable duo. Whilst Simon’s blog, Permanent Style, remains a stalwart destination for sartorial know-how and all things relevant in the luxury menswear sphere, Jamie’s portfolio is a reliable go-to for style inspiration and general menswear pleasure. The Style Guide, the duo’s first print collaboration after almost two years working alongside each other, encapsulates the finest elements of sartorial and contemporary menswear and, Simon says, “appeals to any man at any level of income.” With a simple layout and three short, snappy explanatory points from Simon outlining why each look works, this is a first in men’s style literature. “[Jamie’s] keystone is that he is both a very talented photographer, but also a very stylish guy,” Simon says. Through his lens he is able to pick out the most interesting elements of a look and bring it to life.

We spoke to Jamie to gather his thoughts on some of his favourite shots and what really makes them pop.

On Brian Lehang: “You could argue that his outfit is quite dandy with the very light powdery pink double-breasted jacket, patterned tie, hat and a lapel chain which isn't being worn on the lapel makes it interesting. Brian gets it. He is hitting everything on just the right level. There’s enough accessorising in there but not too much. There's also a certain rakishness to it, the fact that he is wearing the jacket undone. I've seen guys wear double-breasted jackets open before and the cut has been too voluminous and it doesn't look as good. The proportions of Brian’s jacket and how it fits is also on point, so when you look at this from that perspective it all fits him really well.”

On Keita Hiraoko: “Keita is one of those guys who I always look forward to working with as I also look to him for inspiration for the way I dress. He understands proportions but also texture, layering and colour better than anyone I have ever met. He’s wearing a tailored, peak-lapel single-breasted jacket but it's unconstructed, unlined and made out of a very rugged cotton moleskin. It works with the wide-legged chinos, workwear vest and that very American 1950s clean white T-shirt.”

On Oli Benge: “Like all the other Thom Sweeney guys, they're all fantastic representatives of who they are working for. Oli is a great example of a guy who is very much wearing Thom Sweeney in his own way. There's a relatively wide lapel, and the suit is in a very textured cloth, plus there’s a very strong shoulder there. He is wearing it with a very strong blue - it’s not a washed chambray or a light blue poplin. I'm asked all the time: “what's style?” And the thing I've found to be the truest is that style is always about confidence and Oli is very comfortable and confident in what he is wearing, and I believe that comes through in this photograph.” 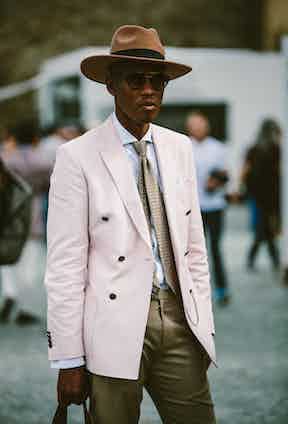 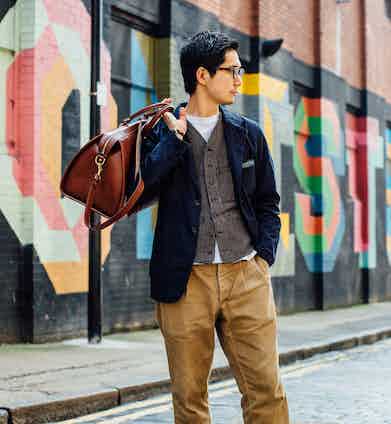 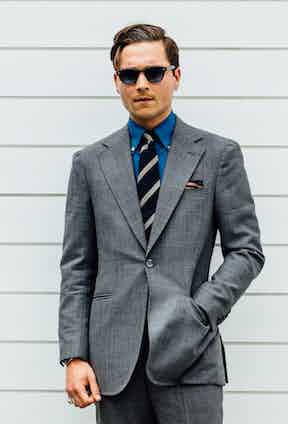 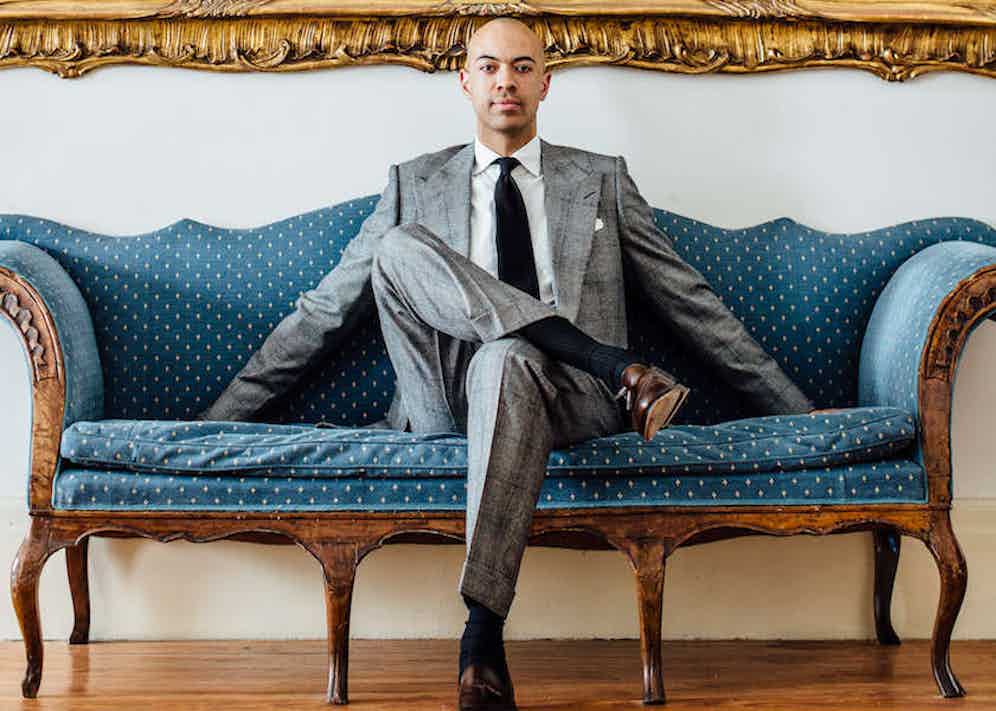 On Jonathan Edwards: “Jonathan is one of those guys who understands flow and drape and he's a very tall and built, so he really has that V-shape. He is all about movement and every single article of clothing that he has in his wardrobe is made to be dramatic. He is wearing Edward Sexton, so whether it be incredibly striking lapels, the length of the coat, the weight of it and the way the hem moves, Jonathan understands the power of making an entrance, and I certainly think his clothes reflect that.”

On Robin Pettersson: “Robin works for B&Tailor who also produce ready-to-wear pieces like these jeans. As you can see from the picture they have a much higher rise and a much more tailored cut. There are a lot of components here that if it was on somebody else, or in a slightly different cut, or different proportions they wouldn't work. But Robin knows what the hell he is doing in terms of dressing, like the purple clip-on braces, high rise jeans, the collar worn over the jacket lapel which takes nothing away from the jacket.”

On Carlos Castillo: “This was shot in January at Pitti. Carlo and his cousin Jorge are some of the first street style icons ever before it became a much bigger thing. Carlos really gets that slouchy casual tailoring. It's very relaxed, washed and wrinkled. There's a durability and a wearability to it and there's a lot of garment dye and a drapey cut to the jacket. Even the orange of the scarf, it's a faded orange, not a bright sunset orange. It looks as if no thought has been given to it; it’s effortless.” 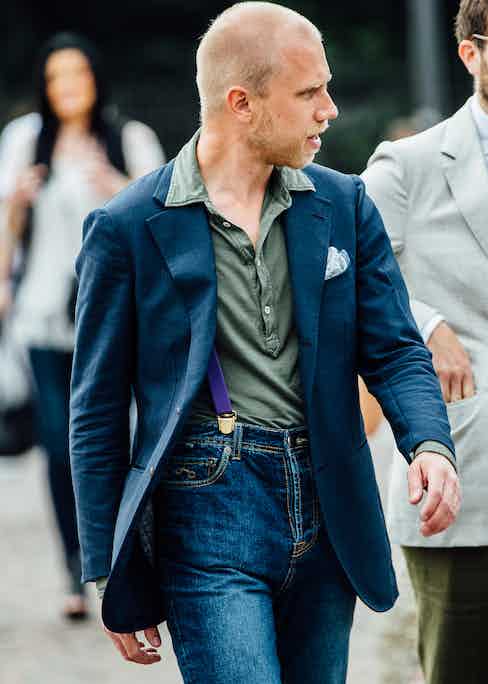 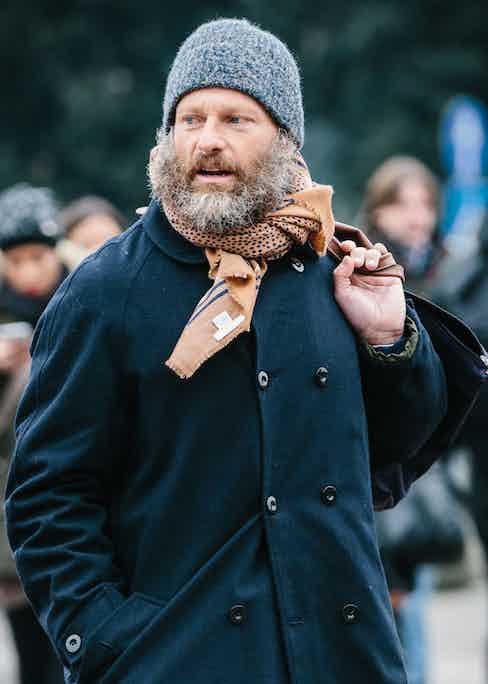 The Style Guide goes on sale on Monday 10th April. For a full list of retailers, see www.permanentstyle.com.