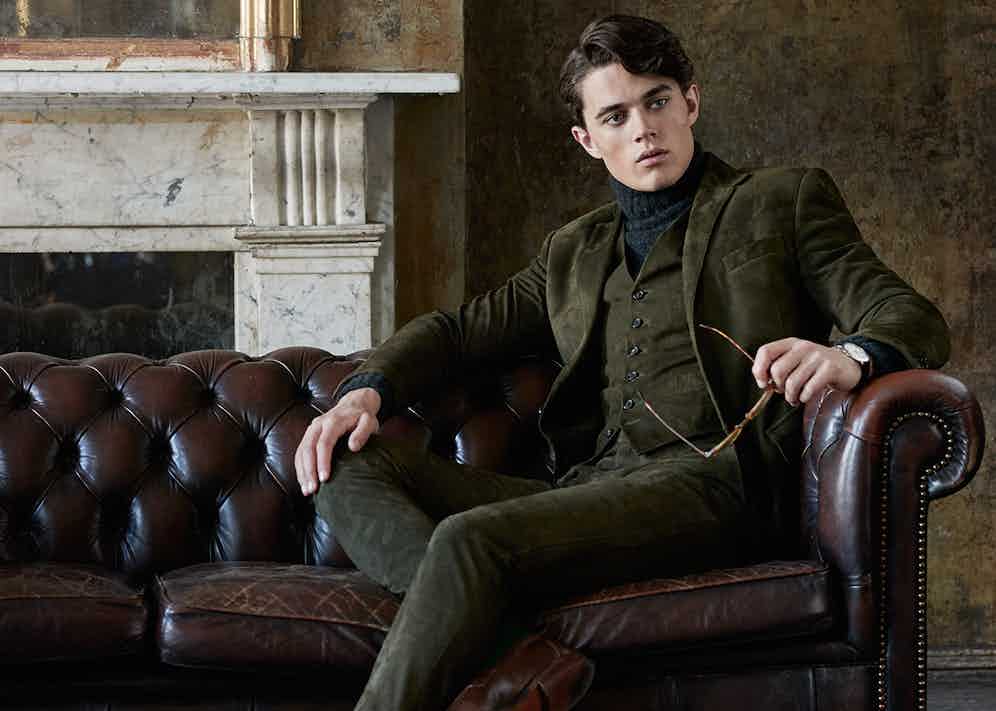 Over a baffling 35 years, starting in 1968, a faintly emetic television ad campaign ran in Britain in which an oily action hero in a black roll-neck jumper would jump off cliffs, steward helicopters through storms, dodge sharks and charge speedboats over waterfalls in order to deliver a woman a box of supermarket-standard chocolates. 'All because the lady loves Milk Tray,' explained a silky, Received Pronunciation voiceover at the end of each commercial, sounding terrifyingly like a dubiously acquitted aristo sex pest commentating on the netball.

Viewers never got to see the recipient of the chocolates, only a tantalising glimpse: a couture-sleeved, Chanel-braceleted arm reaching out for the calling card placed on top of them. But we can safely assume that, with the acute diabetes and obesity still to set in, she was all corn-fed, Vaseline-lensed Bond-girl allure and come-to-chaise-longue eyes. In fact, it really tested viewers' credulity as to why this sophisticated pheromone- fountain of a woman would be wooed into sexual submission by a boxed stack of plastic trays full of nasty hazelnut swirls and chocolate strawberry sundaes, however much peril their libidinous courier had put his stunt man through.

Even more curious than that, though, was the supernatural proficiency with which Milk Tray Man managed to carry off the roll-neck in a way that was simultaneously so right and yet so wrong. He was either the epitome of debonair majesty or a sartorially inept buffoon, depending on any number of factors ranging from the day of the week to the setting of your T.V.'s contrast knob to the extent to which England had made a hash of the last Ashes series.

In fairness to the Milk Tray Man, the roll-neck - or 'turtleneck', as it's referred to in the U.S. ('skivvy' in Australia) - is notoriously hard to pull off, and it's probably perspicacious for us non-fictional types planning to tread the right side of a thin sartorial line to examine its history, which is itself fraught with ambiguity. Round, neck-hugging collars that fold over go back to 15th century Europe, possibly beyond. The Elizabethan ruff can probably be deemed its distant relative, and the Tudors seemed to have the same struggle with it as contemporary men (ruff size alone was a quagmire, as satirised in an episode of Blackadder II in which the eponymous arch nobleman played by Rowan Atkinson tells his friend Lord Percy that he resembles 'a bird who's swallowed a plate'). 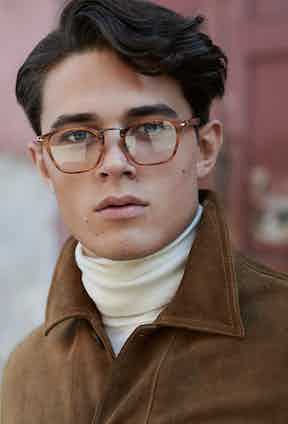 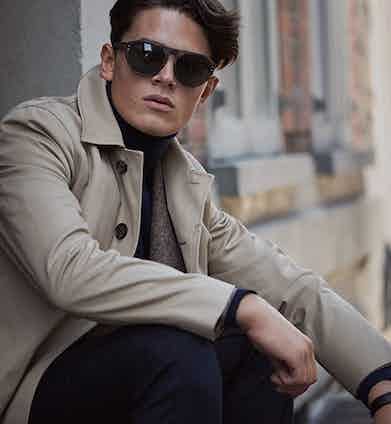 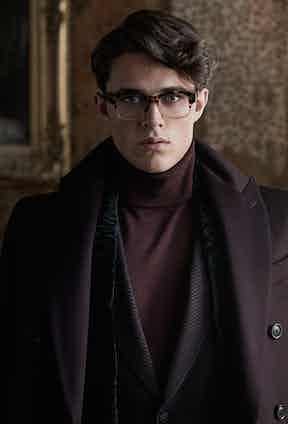 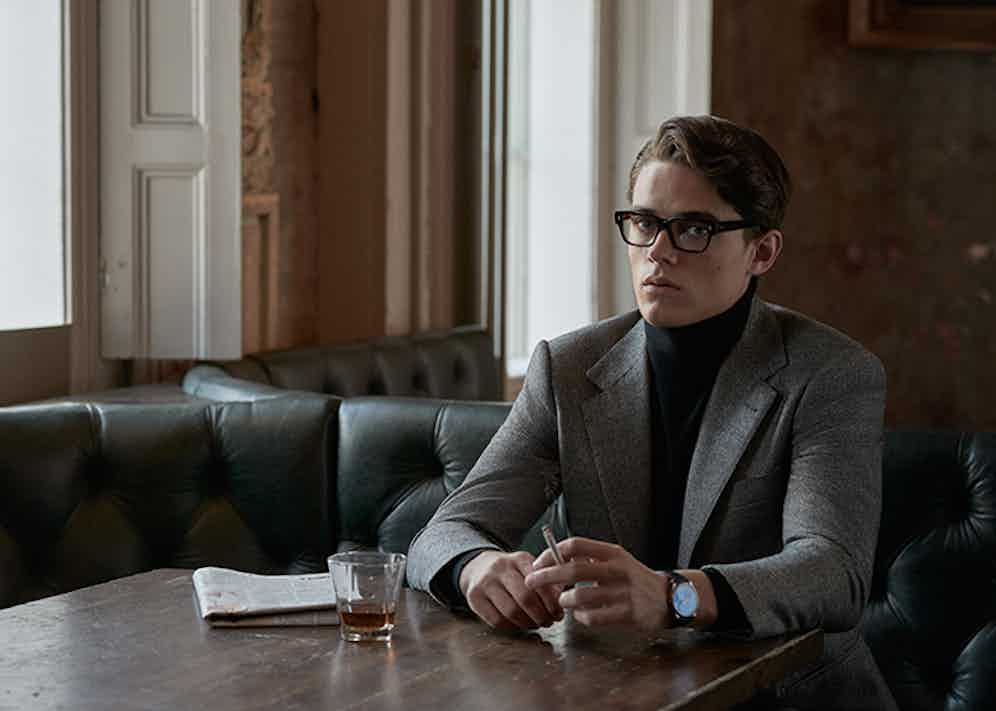 One potential pitfall for would-be roll-neckers - especially folk of the ilk who read this - is the potential for perceived lack of formality. The significance of the word 'perceived' here is neatly demonstrated by the following anecdote from Dan Rookwood, contributor to The Rake and Mr Porter's U.S. Editor - one that neatly encompasses Midnight in the Garden of Good and Evil author John Berendt's claim in an issue of American Esquire that the roll-neck is 'the boldest of all the affronts to the status quo'.'A couple of years ago, I attended a well-to-do luncheon at a Mayfair club with an industry peer,' Rookwood recalls. 'Let's call him Tom, for that indeed is his name. It was winter, and Tom turned up wearing a beautiful overcoat that he removed to reveal a double-breasted suit and roll-neck ensemble. And he was promptly refused entry for not adhering to the club's strict collar-and-tie dress code. Tom is a smooth talker as well as a smooth dresser, so he managed to persuade them to bend their draconian rules. He was the best-dressed man at the event, even if he did have something of the Bond villain about him.'Milk Tray Man, conversely - more of a pastiche of 007 than his mass-genocidal antagonists - probably achieved damage limitation by keeping it simple: an eccentric approach to matching other garments with a roll-neck usually works only if the wearer has the pre-loaded flamboyancy allowance that comes with being a rock star, although Prince tore the arse out of his own personal allowance when he wore a white roll-neck with a purple tank top layered on top at the French Open earlier this year (The Daily Telegraph's comparison to 'an acid- jazz vicar' was harsh but apposite). Bayern Munich coach Pep Guardiola's triumph with a much more tentative approach, wearing his under a Milanese-cut charcoal suit at this year's Champions League semi-final against Barcelona, demonstrated neatly the merits of caution, and it seems likely the foppish Spaniard learned from the best of them: ultra-rakish movie stars who have executed the simple approach particularly effectively, such as Michael Caine in The Italian Job, and Steve McQueen's deadpan detective Frank Bullitt, who paired his with a single-breasted brown tweed blazer to devastatingly handsome effect. 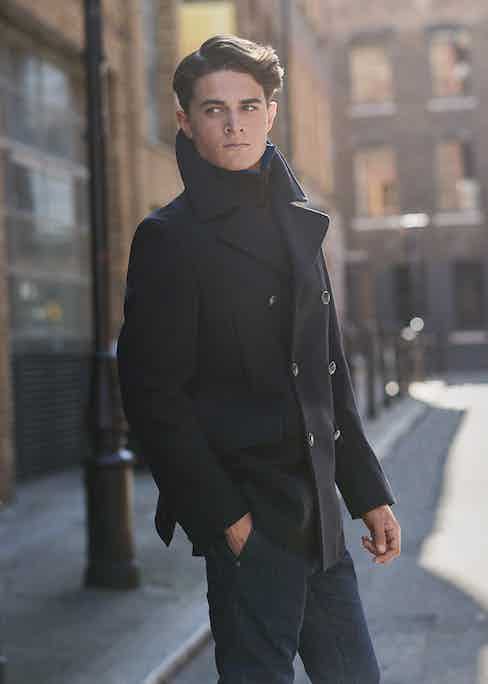 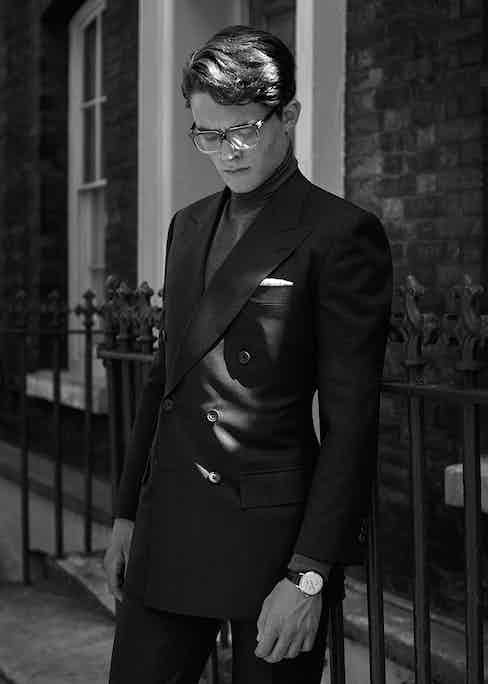 Others, meanwhile, have got the roll-neck unequivocally right by tap-dancing the line between flamboyance and simplicity: think Mick Jagger, who managed to carry off a chunky, neck-engulfing number during the Stones' appearance on Ready Steady Go! with more than enough aplomb for Let's Spend the Night Together to sound like a viable proposition, and Yves Saint Laurent looked fantastic swanning around Paris in the late sixties complementing his with a simple white silk scarf, lavishly collared leather coat, and temple-hugging shades. (Karl Lagerfeld, before abundantly starched collars became his thing, also looked the part with roll-neck, notched lapel

blazer and colourful-rimmed specs). Ernest Hemingway, lounging around Cuba in the late fifties, upped Jagger's stakes on the chunky front with a garment that made him look like the coolest Norwegian whaling-fleet captain in history. Unlike Noël Coward's approach to the roll-neck in the 1920s, and beatnik-café theorists' appropriation 30 years later, Hemingway's look was anything but literary-chic.

All of which goes to show that pulling off a roll-neck (in both the idiomatic and literal senses of the phrase) is a dark art with few hard and fast rules, as the eclecticism of stunning ensembles on these pages, created by The Rake's International Fashion Editor, Sarah Ann Murray, reflects.
If there are no rules, though, there are plenty of tips to take on board. Needless to say, top-quality fabric is a must (not least because pulling off a cheap, static-laden roll-neck can make the wearer look like Einstein caught in a wind tunnel). Furthermore, as Rookwood points out: 'If you're rocking stubble, your roll- neck may catch and pull, which could leave you looking like you have some unsightly shaving rash.' 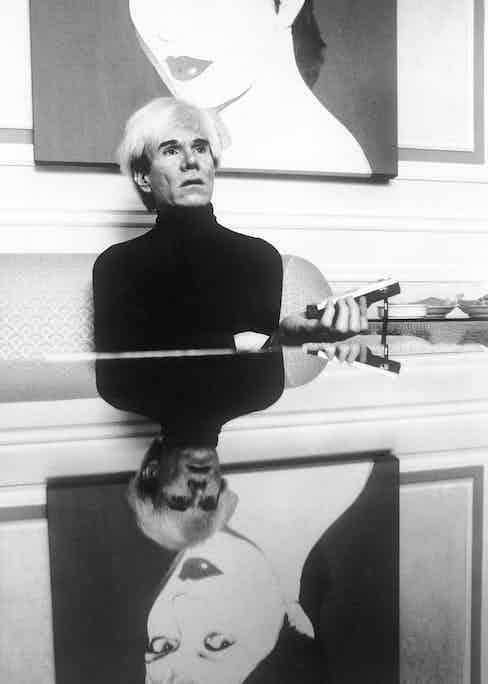 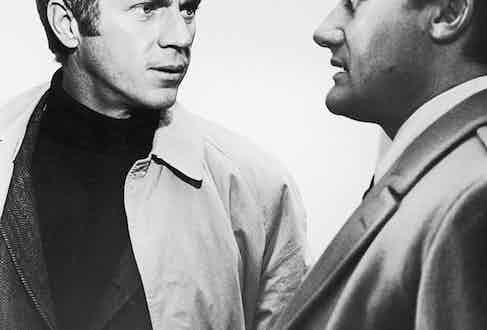 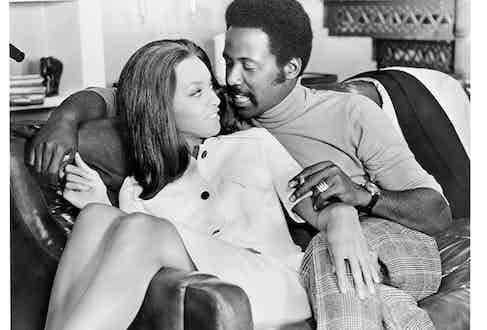 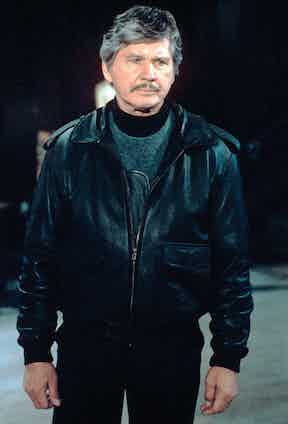 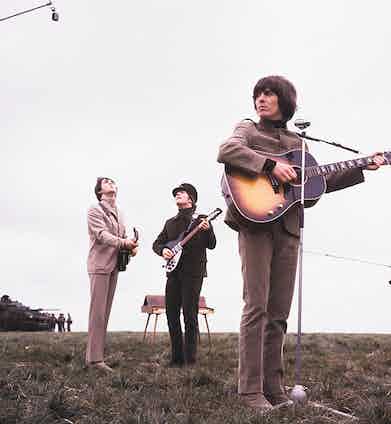 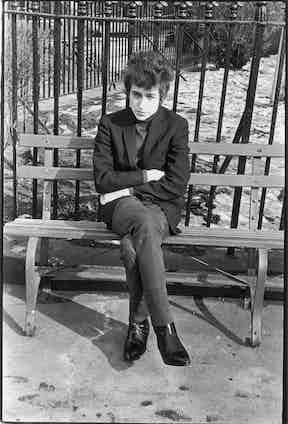 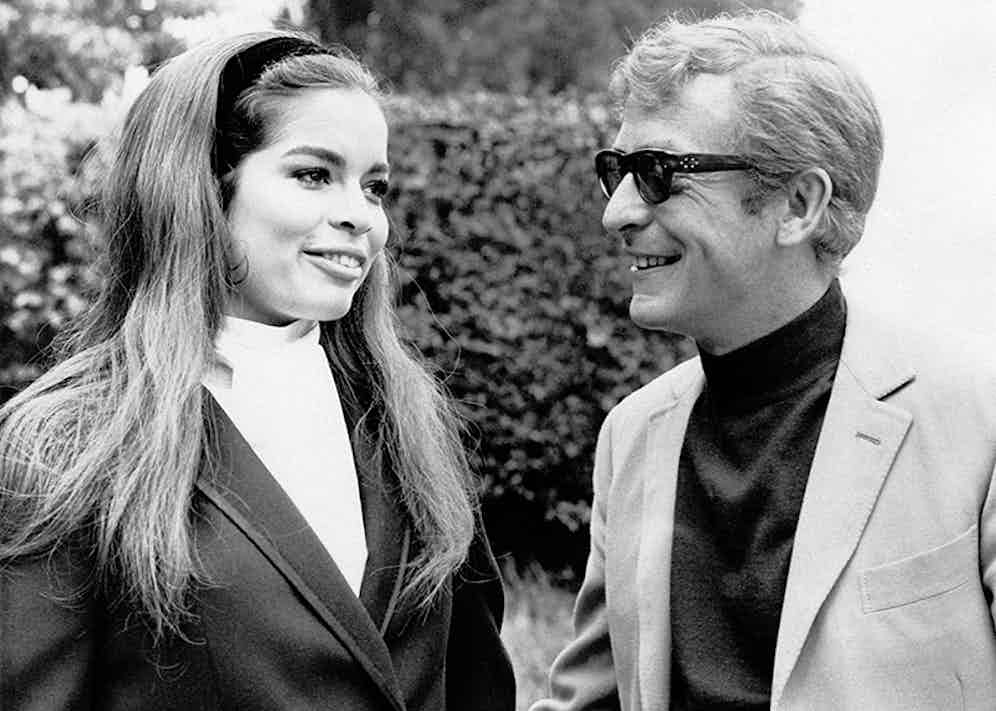 Carrying off a roll-neck with scruffy aplomb, meanwhile, should probably be left to Joaquin Phoenix, who somehow managed to pair one with a denim shirt in Inherent Vice to excellent effect, unless you're genuinely after some loose change for a nearby vending machine. Another roll-neck oddity: conspicuous eyewear and roll-necks make a safer match than one might think, as demonstrated occasionally by Lapo Elkann, whose thick-rimmed glasses poised inches above the garment's summit complement the look with a healthy dose of geek-chic when paired with one of his characteristic, abundantly lapelled double-breasted jackets (Richard Roundtree's John Shaft also struck gold with a wide-lapelled approach - but in his case with a leather jacket).

'A fine-gauge roll-neck works very well in colder weather with an overcoat, suit or tailored separates,' says Rookwood of his own personal roll-neck preference. 'It looks better worn under a jacket or a coat rather than on its own. The roll- neck should be nicely fitted without being tight, so that it sits comfortably under a jacket. Black roll-necks are considered slimming, as they help to elongate the neck and look good with charcoal tailoring. Chunky roll-necks are less flattering, especially for those who are not as tall or as slim as they would liketobe.'

Gieves & Hawkes creative director Jason Basmajian also has strong feelings on the subject. 'I love the versatility of the roll-neck,' he says. 'Fine-knits can be worn instead of a shirt with tailoring, or under another heavier knit to layer. Chunkier versions look fantastic under a coat or leather jacket. Be sure that the knit fits through the body so that the layers on top don't look adversely bulky. Maintain an elegant and considered silhouette with fine-gauge knits by tucking it in and wearing a belt.'

My own, utterly unscientific, estimation would be around 73 percent of media studies lecturers. And anyone who ever drops ice-cubes down the neck of sartorial grace by wearing one made in a stretch fabric, thus weaving the illusion that he's painted his upper garment on with a brush dipped in a pot marked 'beige liquid acrylic'. Pathological style heretic Alan Partridge, wearing his too close to the chin and paired with an ill-fitting, plum corduroy jacket looked like a North Norfolk digital radio host - which is precisely what he is - while the image of roll-neck wrongness most readers will be familiar with is Will Ferrell's Ron Burgundy in Anchorman.

In conclusion, it would seem that rocking a roll-neck is the sartorial equivalent of playing the violin: done well, the effects can be sublime; done ineptly, the results are teeth-itchingly grating, and there's simply no in-between. Unless, of course, you are the oleaginous protagonist of a preposterously daft long-running British television ad.