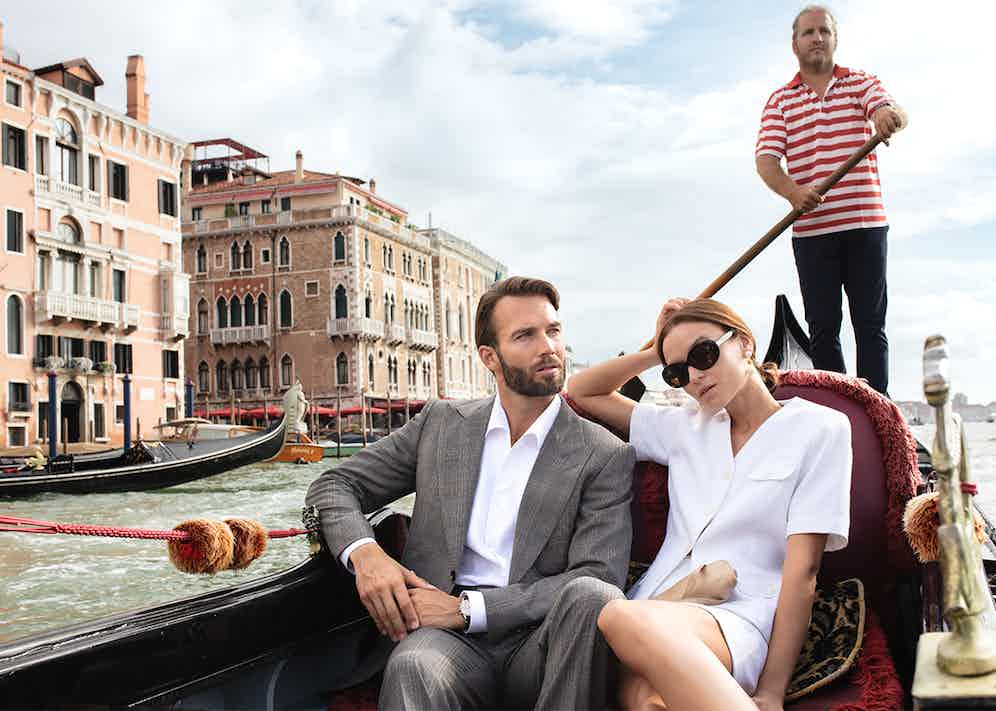 For those of us on land, Venice is a hard place to navigate. The streets offer innumerable dead-ends and paths that lead to the water, forcing visitors to backtrack and resort to mental compass-bearings. North. South. (Where is the Grand Canal? Is it that way?) OK. Go East, follow the path. Turn West. You might arrive at your destination. 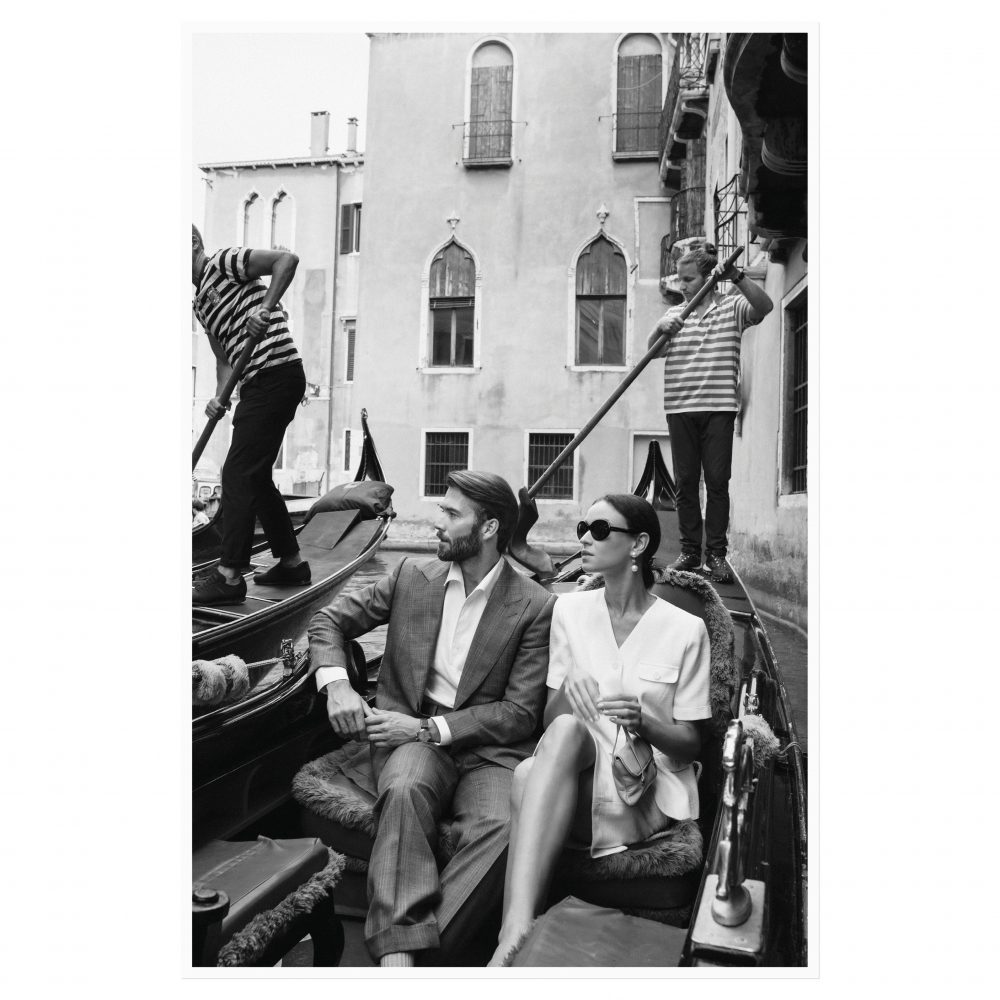 Instead, it is much quicker to hop into the gondola. From our base at the Palazzina Grassi, we are fortunate enough to sit at Venice’s very centre. To the north is the Rialto bridge. On the other side is St Mark’s Square, with its fantastical basilica; and right across the bridge is the alternative neighbourhood of Dorsoduro. 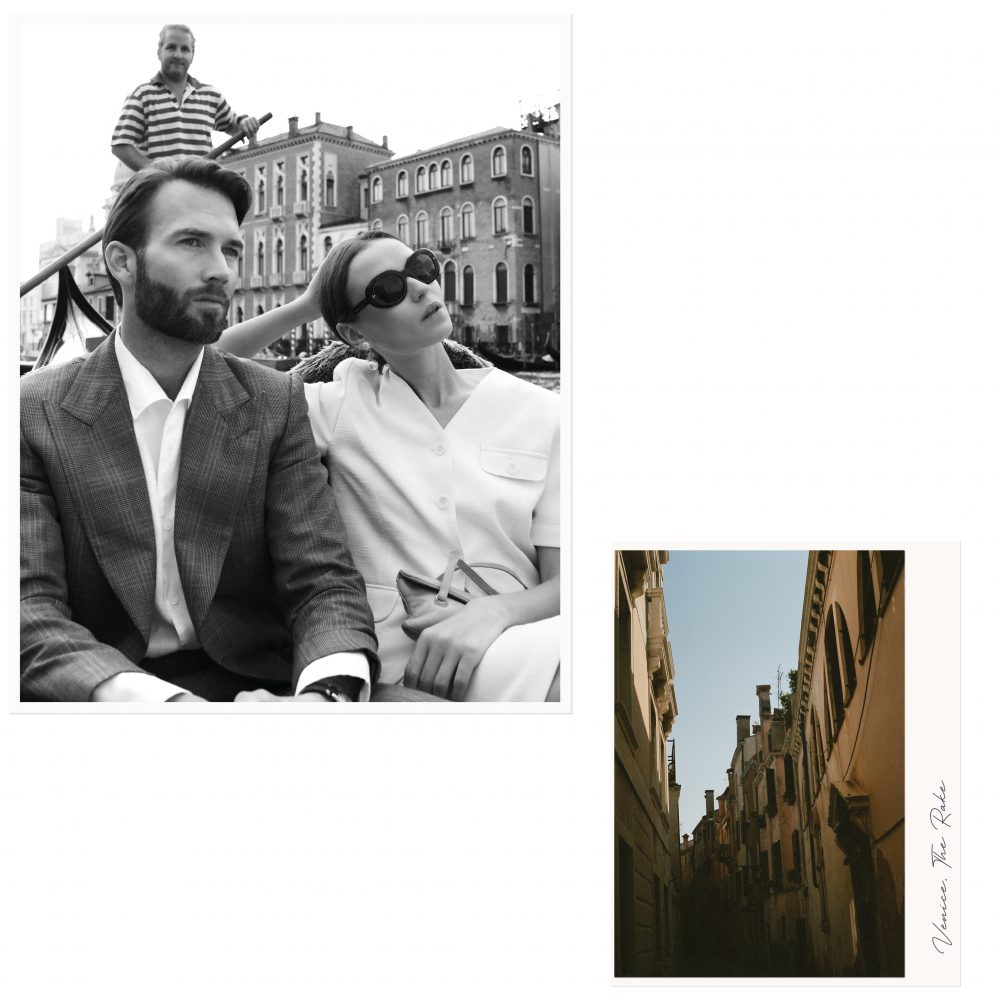 After breakfast at the Palazzina Grassi, our gondolier took us through a network of smaller canals, pointing at the palazzos, like the Papadopoli, and singing old tunes that have no doubt been passed down through generations of his fellow boatmen. “It’s the regatta,” he told us, motioning to the banners on each balcony and interrupting himself mid-song. Tomorrow, hundreds of boats will parade through the waterways in varying colours and for different causes. It happens in the same week as the Film Festival. Quite the time to be in Venice. 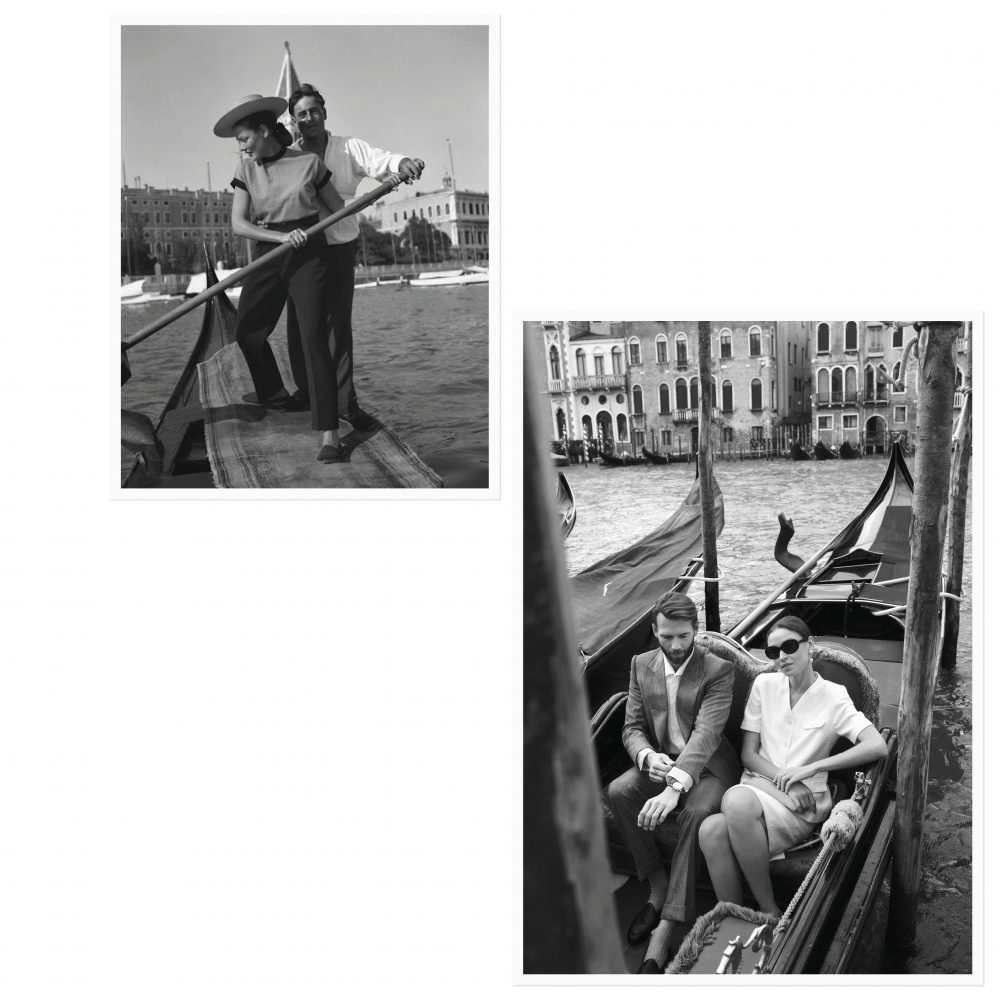 We had heard news of a popular and authentic spot to grab cicchetti—that Venetian pintxo slice of crusty bread topped with mammoth portions of seafood, cheese, and ham. Osteria al Squero is a hole-in-the-wall packed with students from the nearby university, as well as the city’s writers and painters. It’s also—a good sign—a place where the dominant language one hears is Italian, and even better, in the cursive Venice dialect. We ordered a spritz Select, the original version of the spritz drink, which sits between the sweet and bitter flavours of Campari and Aperol and slightly boozier, so that after two, the already dreamlike surroundings of the city become pleasantly deranged. 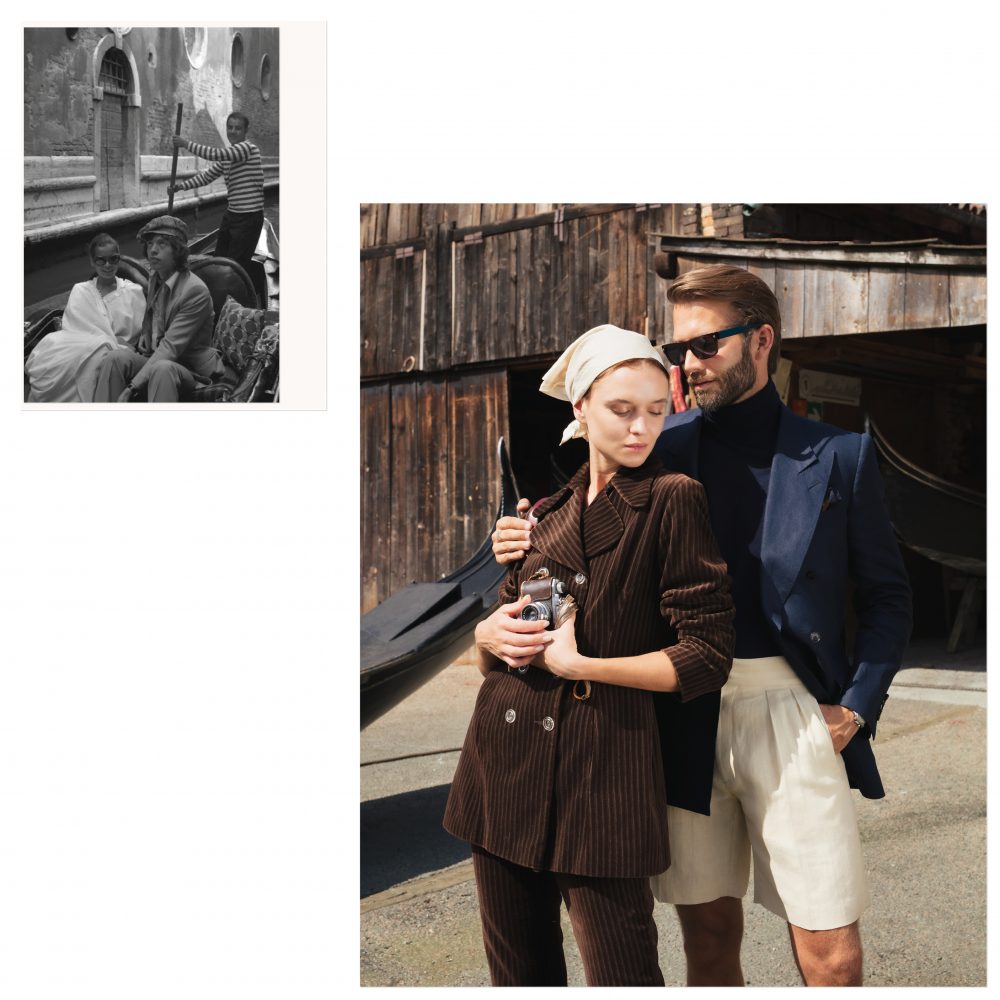 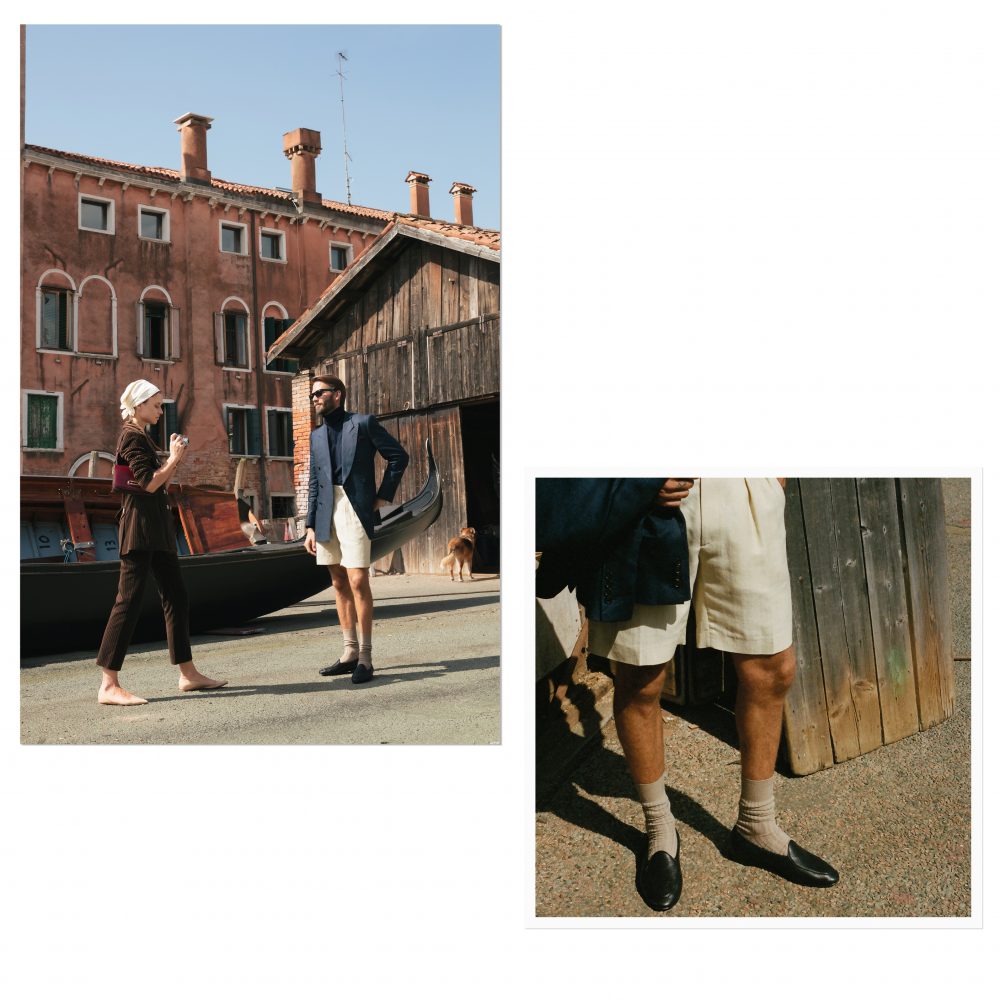 On the other side of the canal, we spied a boatyard. “That,” our gondolier mentioned to us, “is where they repair the gondolas. There are two Tyrolean homes, do you see?” In the foreground, wooden-log buildings, more Alpine than Venetian stand out like flies in a glass of milk. They are not meant to be here, but their presence among the spires and Moorish windows marks another cultural irregularity in Venice’s architecture. The story goes that many of the artisans who crafted the gondolas were brought in from the Tyrol region of northern Italy—setting up shop, they built their own homes to match those of the beloved Alpine villages. 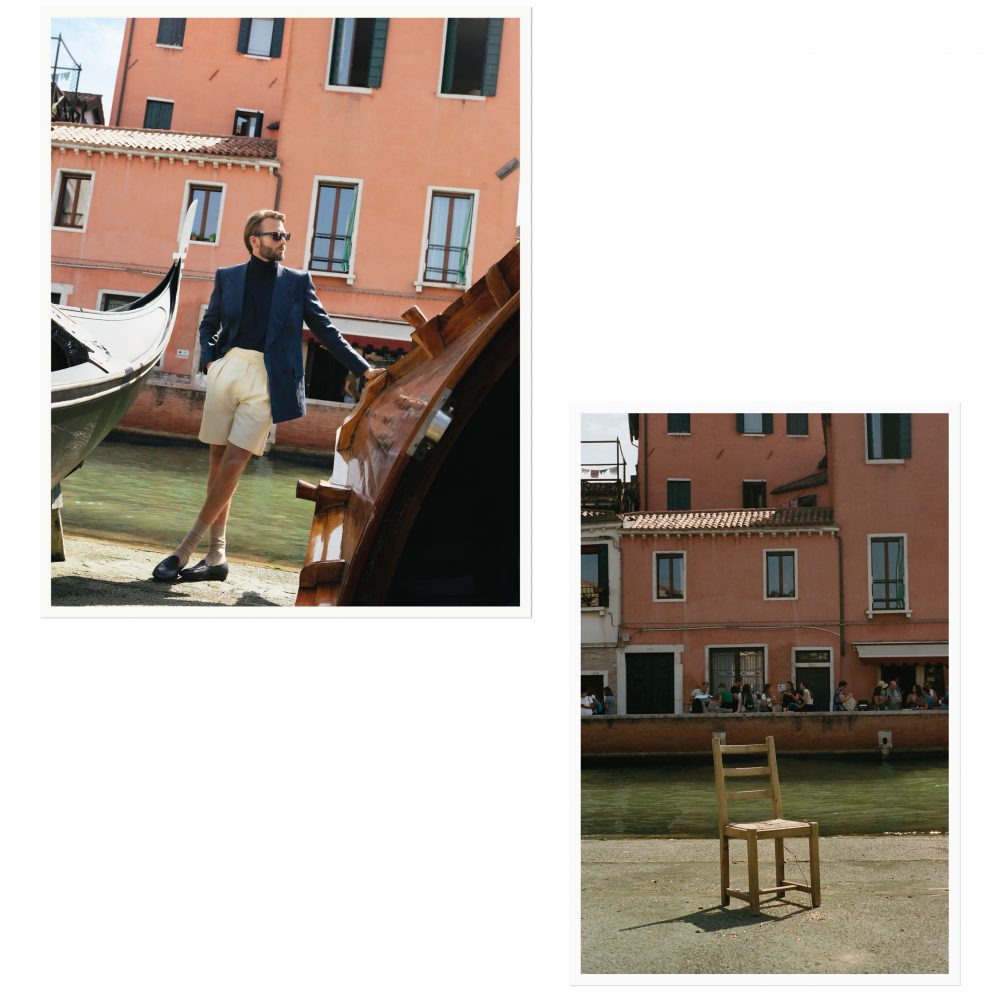 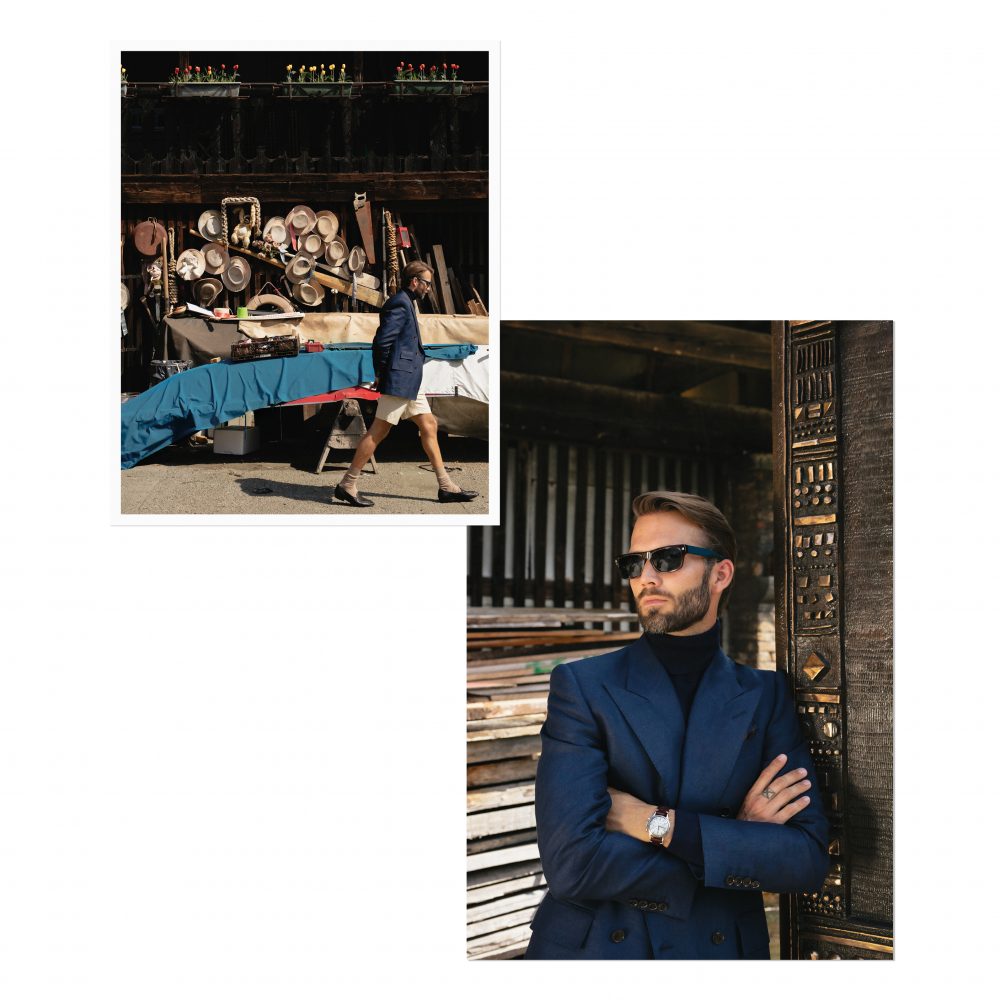 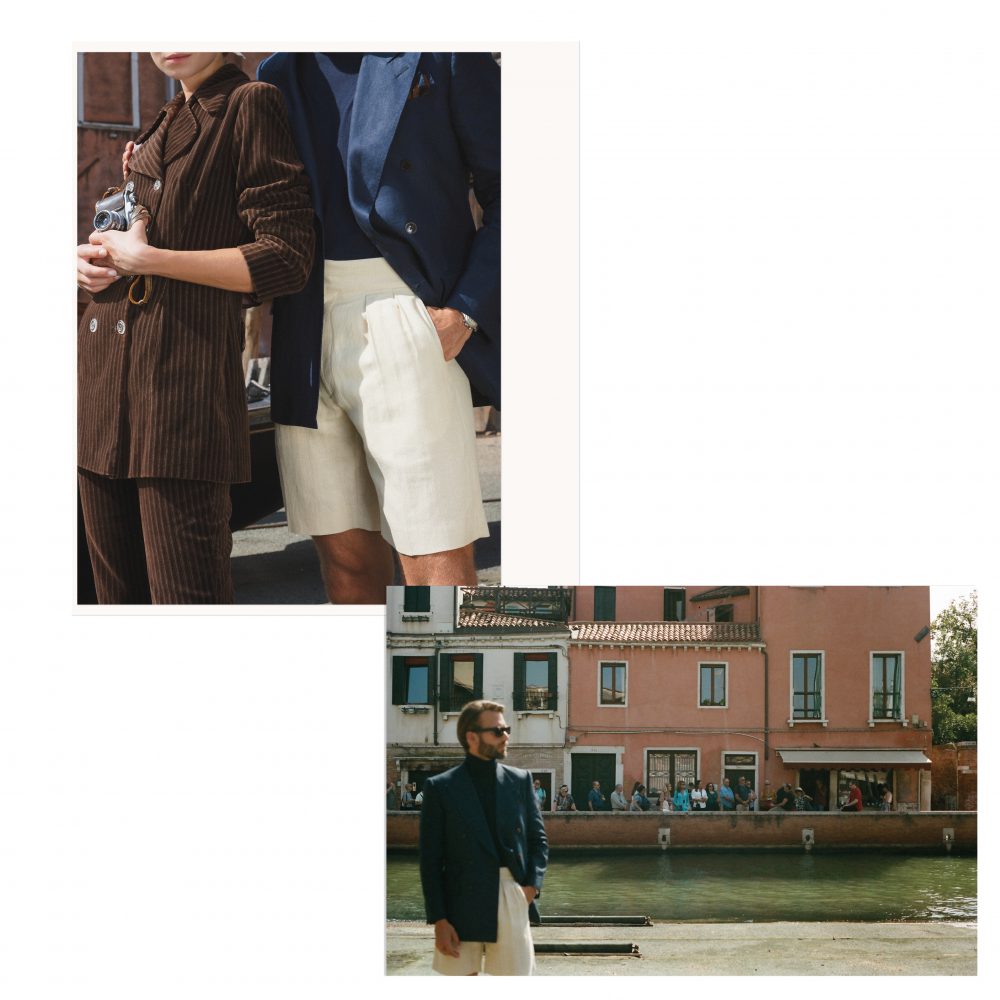 The famous Harry’s Bar was an appropriate port-of-call for a drink after lunch. This is where the Bellini and the Carpaccio were conceived by founder Giuseppe Cipriani, and the small, honeycomb bar became increasingly more famous under the stewardship of his son Arrigo (who was meant to be called Harry, but because of strict rules in the facist Italy of the time, settled with something near enough). 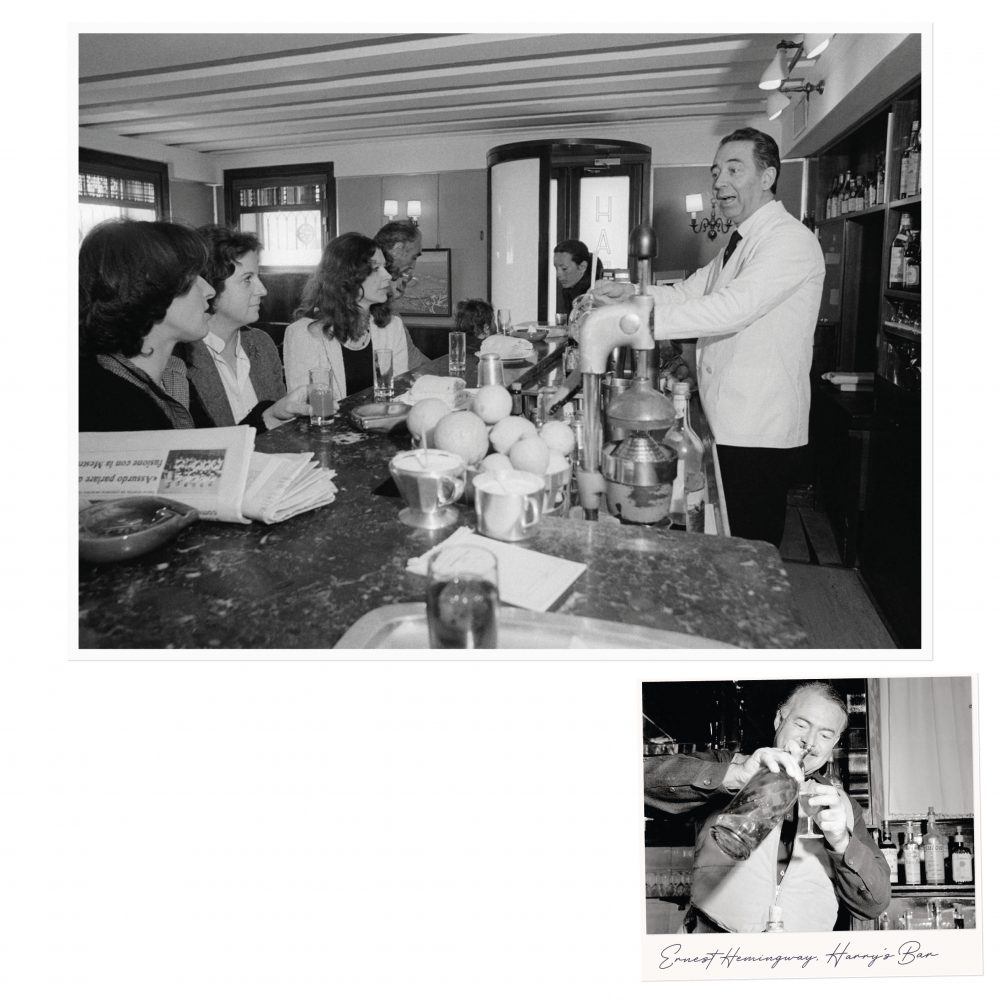 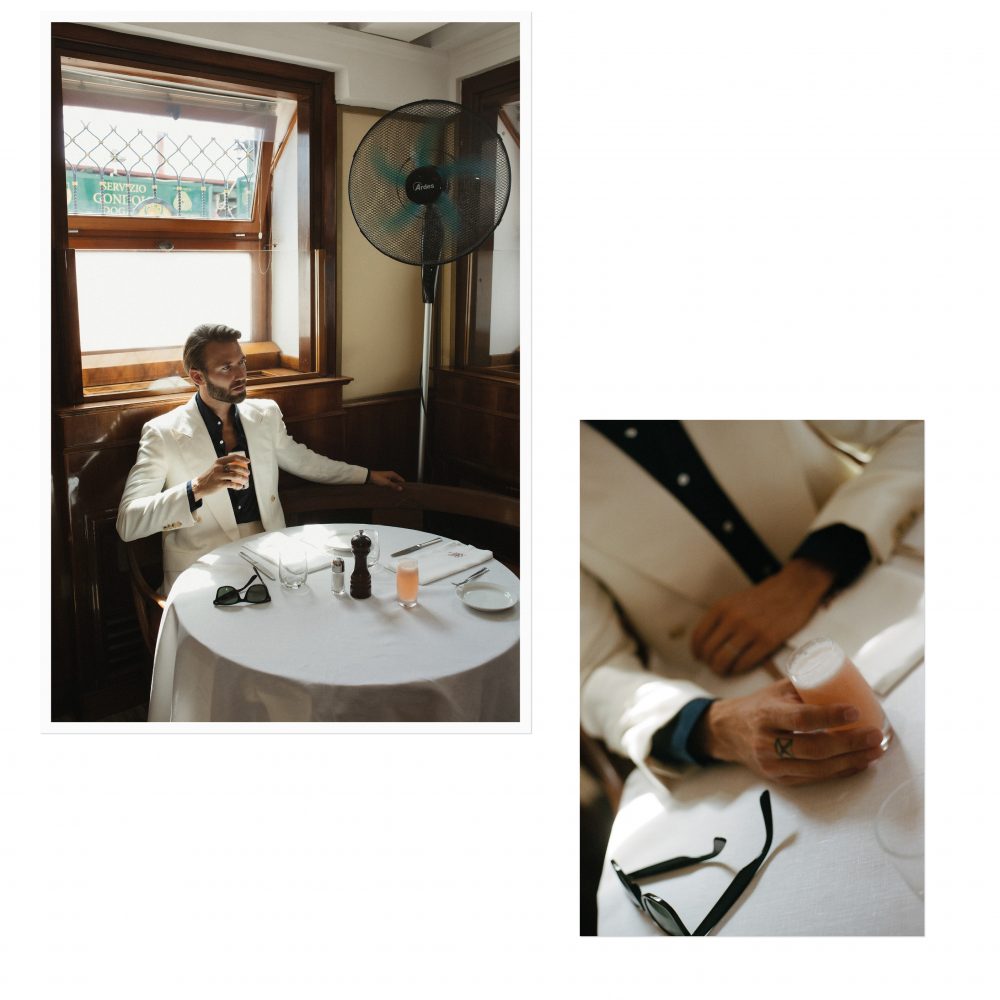 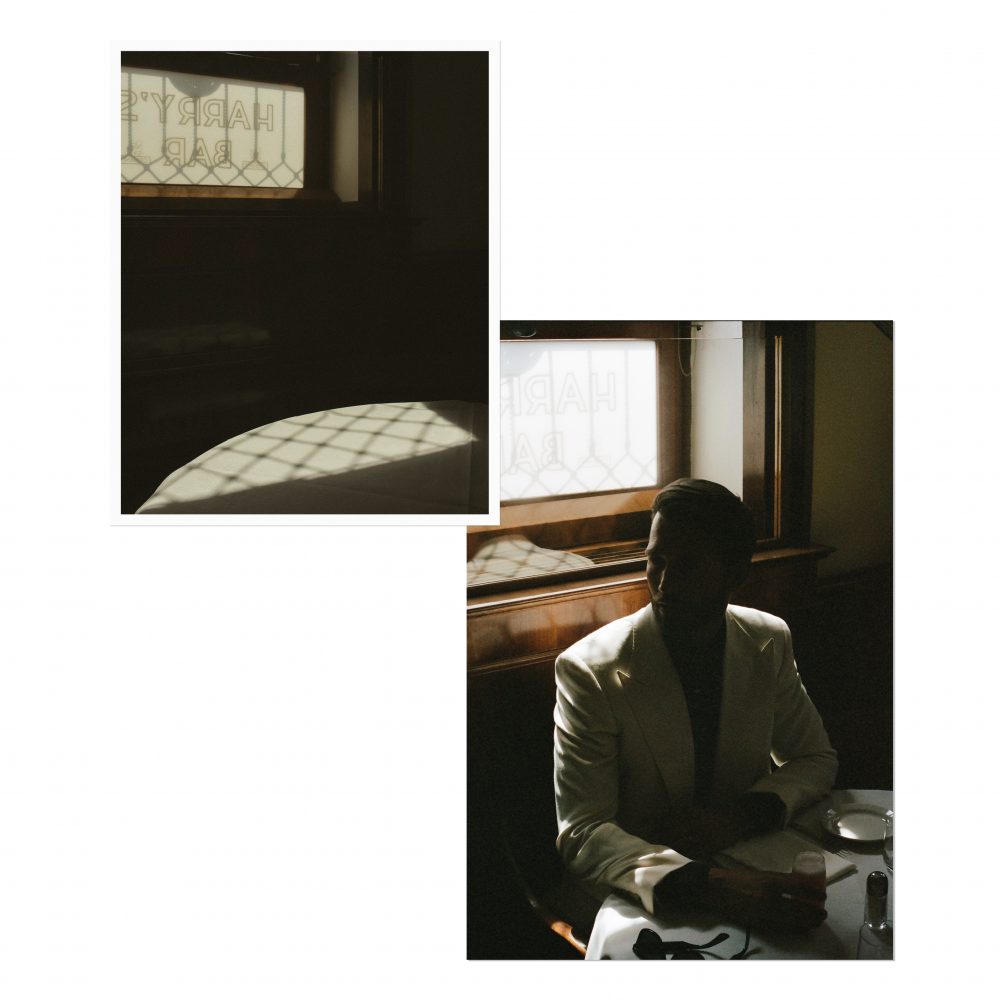 Aside from the Bellini, which is delicate and moreish, they specialise in mixing cod with polenta, or offering portions of freshly-caught fish. Lunch at Harry’s is a pick-and-mix of dishes that is all the more satisfying when they are shared. Things are done simply, and with a level of taste so subtle that you become unaware of its magic until leaving (ask to see the unusual Martini glass, and you’ll recognise Arrigo’s genius). Hemingway, Guggenheim, and Truman Capote all found a home here. And so we felt as though we were in good company, even among the storied phantoms of another time. 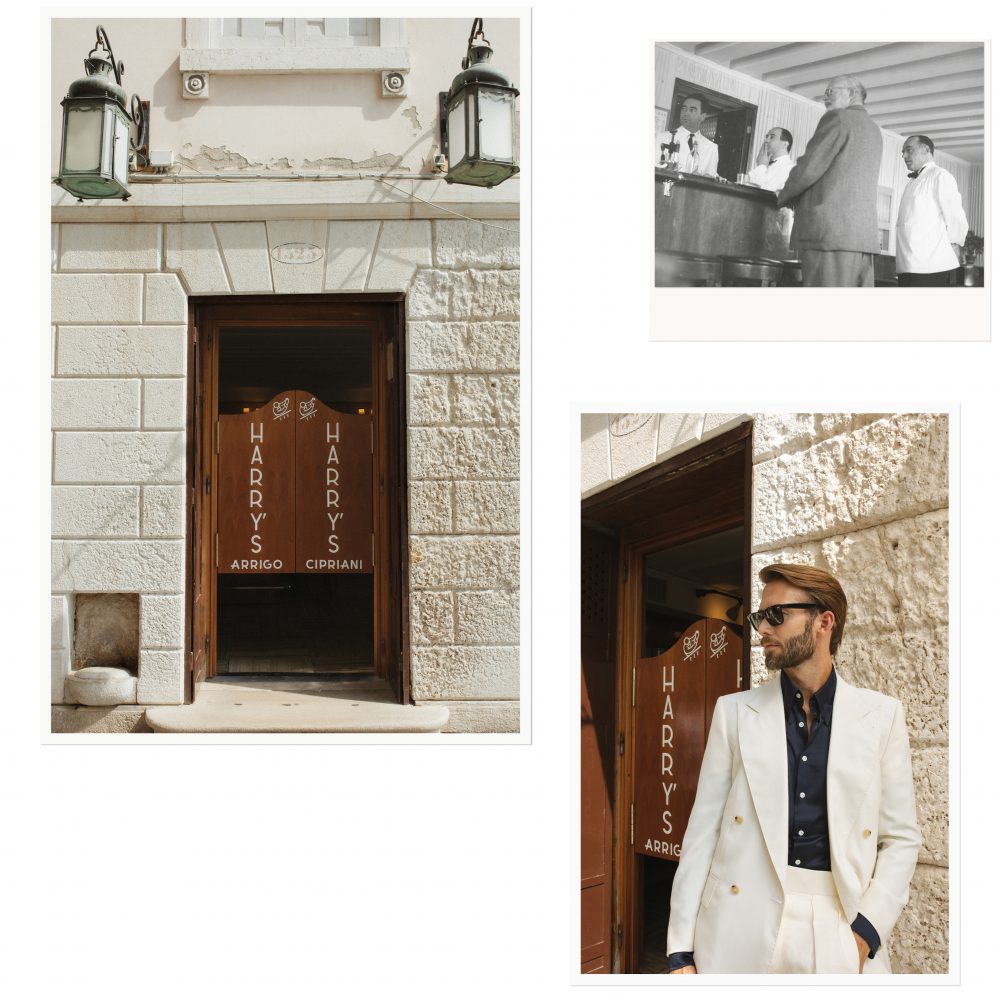 In good spirits, we departed to shop at the city’s little nooks and shops. Venice is full of treasures still crafted in the traditional way, and Giberto Glass makes the finest Murano glassware—which is itself among the best in the world. It is run by Count Giberto Arrivabene, the dashing aristocrat who resides on the top-floor of the Palazzo Papadopoli. There are also elegant furlane slippers to be found at Piadaterre by the Rialto: the original address to find the gondolier shoe (which actually looks rather chic when paired with your cotton or linen tailoring). 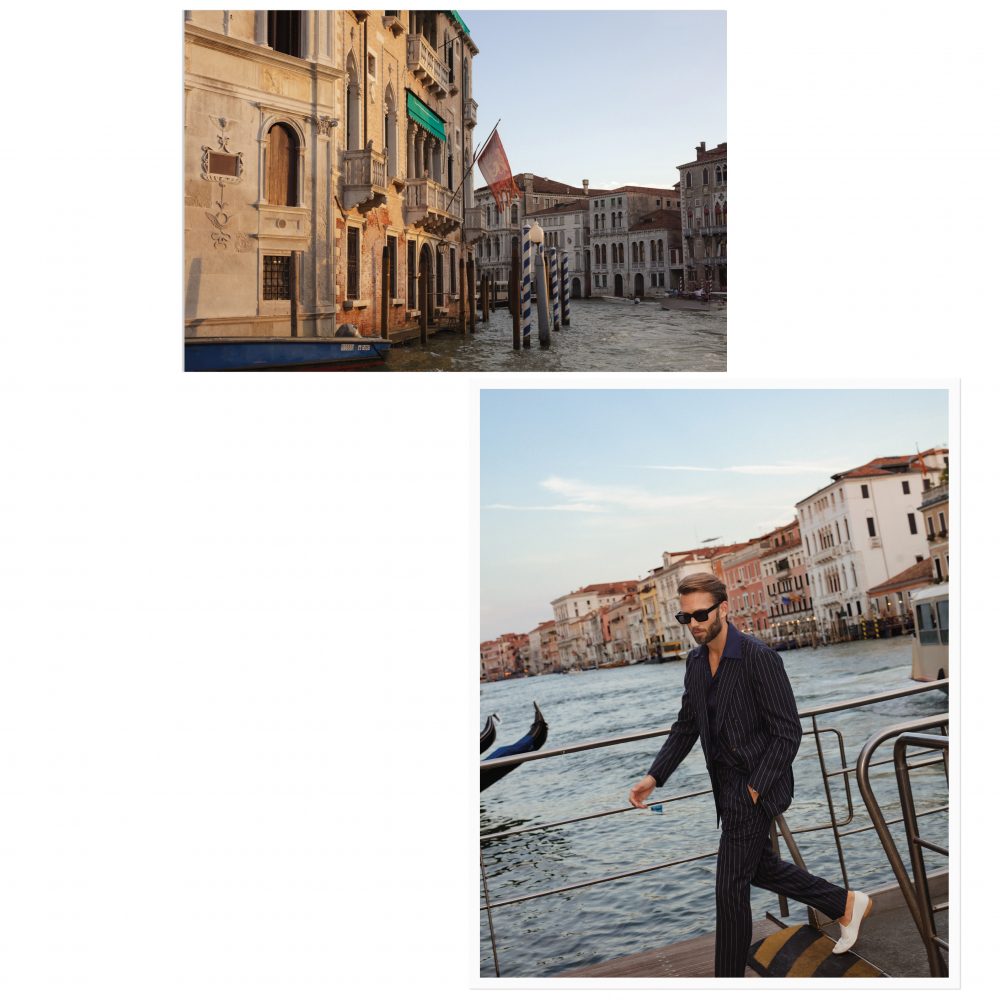 Then, there is the most Venetian of gifts: a carnival mask. Ca’ Macana in Dorsoduro offers classes where one can make their own—or simply choose the various personas, from Harlequin to the sad Pierrot from the walls. Nearby, we gathered some stationary from the famous Alberto Valese Ebru, who with the traditional methods of printmaking offers notebooks and photograph albums that are adorned with the facades of the palazzos and buildings of the Grand Canal. Within these notebooks, we scribbled our plans for the next day and departed for the Palazzina Grassi, as time—like the waterways themselves—moved on at a rapid pace. 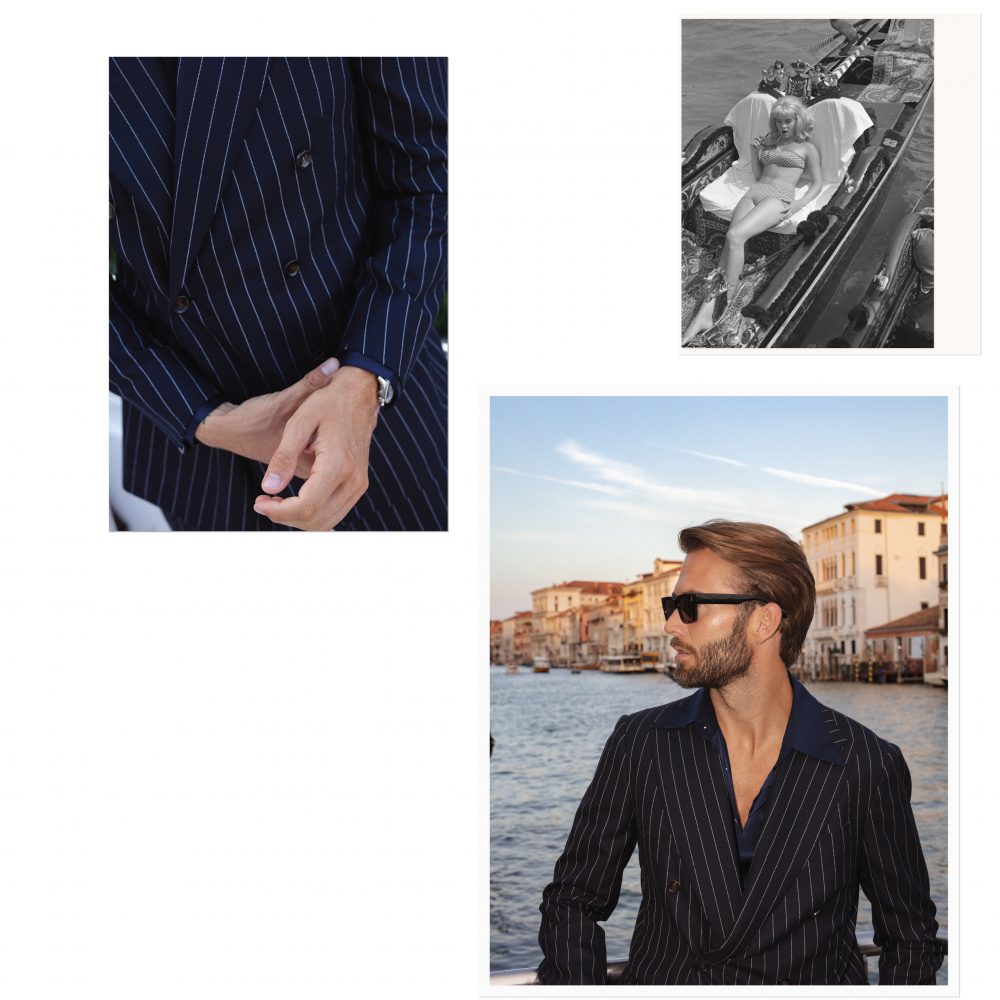 “Tomorrow, we’ll make an effort to see the Tinoretto’s at San Rocco,” we promised. “Then we’ll sit at Florian’s in San Marco’s Square before exploring Peggy Guggenheim’s collection at the museum.” Plans must be made in Venice ahead of time. There are so many things to see and to do, and the day disappears as the endless distraction of the city’s beauty slows one’s pace, and brightly lit restaurants invite one to spend hours and hours inside eating lagoon crab, clams, or vongole spaghetti. 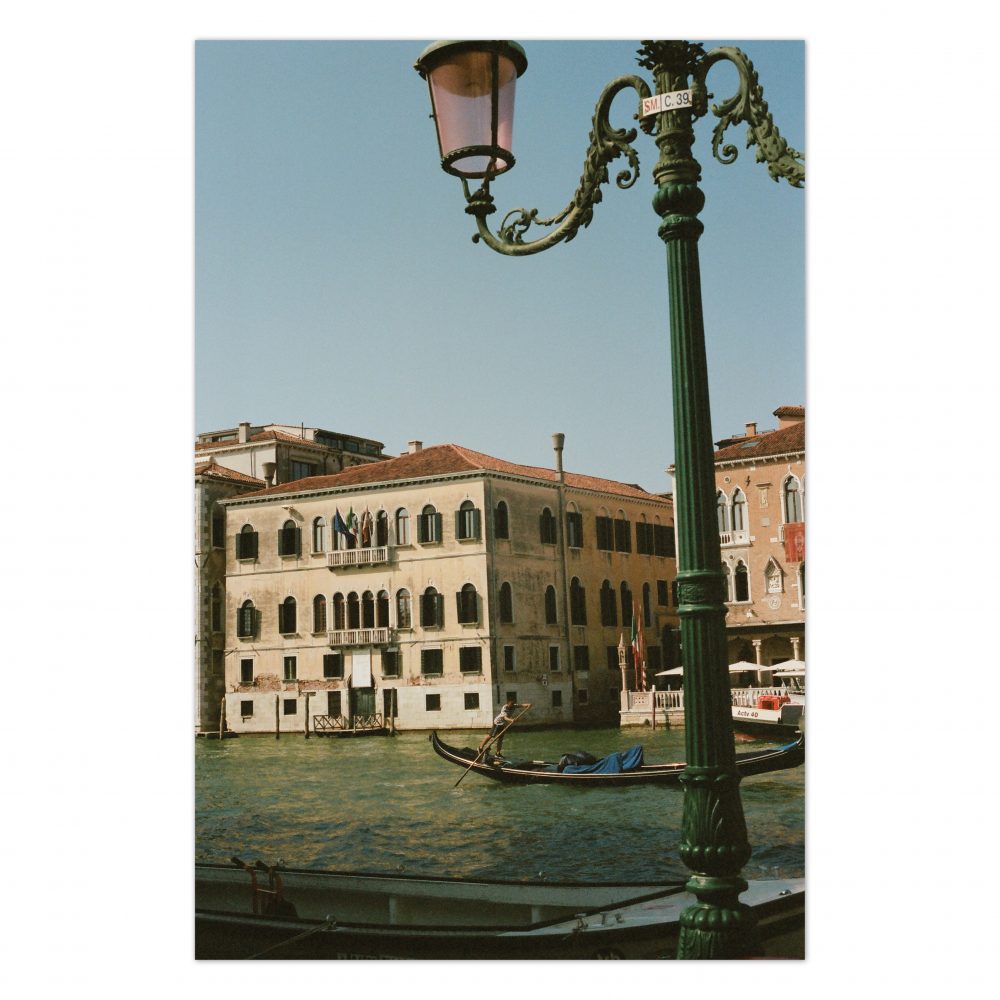 There was Alla Madonna, tucked into an alleyway by the Rialto. Since the early 50s, visitors have arrived to try the seafood and their sweet tiramisu (indeed, it is a candidate for the dessert’s origin). On the Lido, we sat beside the directors and film critics at Trattoria Andri. The dish to order here is the octopus prepared in its own ink, with a slice of polenta—a must-have when in Venice. “But nothing makes a Venetian happier than tramezzino!” remarked our gondolier. These small Italian finger sandwiches can be found all over the city, crammed with prawns, salamis, and eggs; favoured by all walks of life. If you walk into Bar Tiziano, you will notice off-duty gondoliers resting by the steel bar, picking a selection of tramezzini to enjoy with a draft beer or a glass of wine. 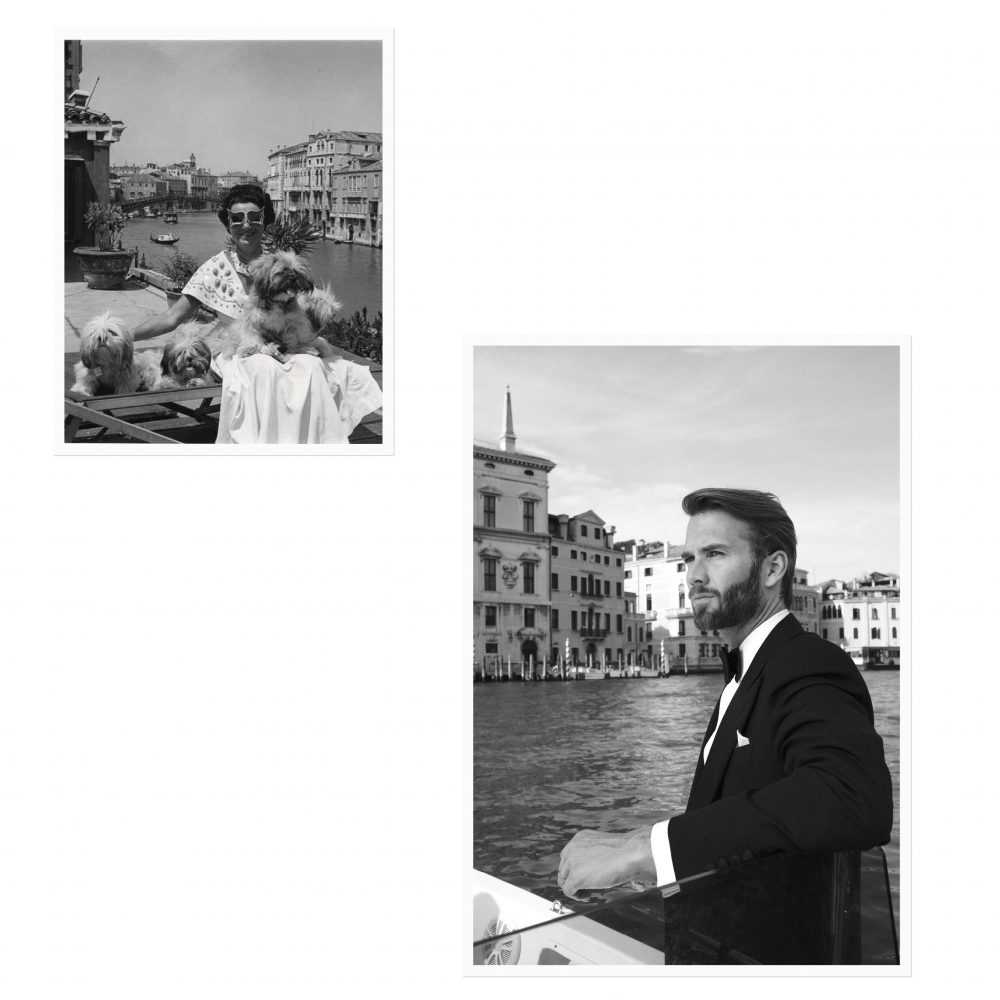 By then, it had gotten quite late. We had been invited to an event that evening that was supposed to be gathering the stars of the day with members of Venetian society. This called for us to dig out our black-tie ensemble, and as we waited patiently for our colleagues, we could not resist the Palazzina Grassi’s Krug Champagne Lounge, which had a spirit of the old world, but felt contemporary and cool. With the Film Festival in full motion, chatter about the movies filled the air; about what was worth seeing, what—and this was where people tittered and lowered their voices—had been less than satisfactory, and the small scandals that met the cinephilia of the occasion with a sense of celebrity worship. The Festival brings another, quite glamorous mood to Venice, and it is no way overbearing. 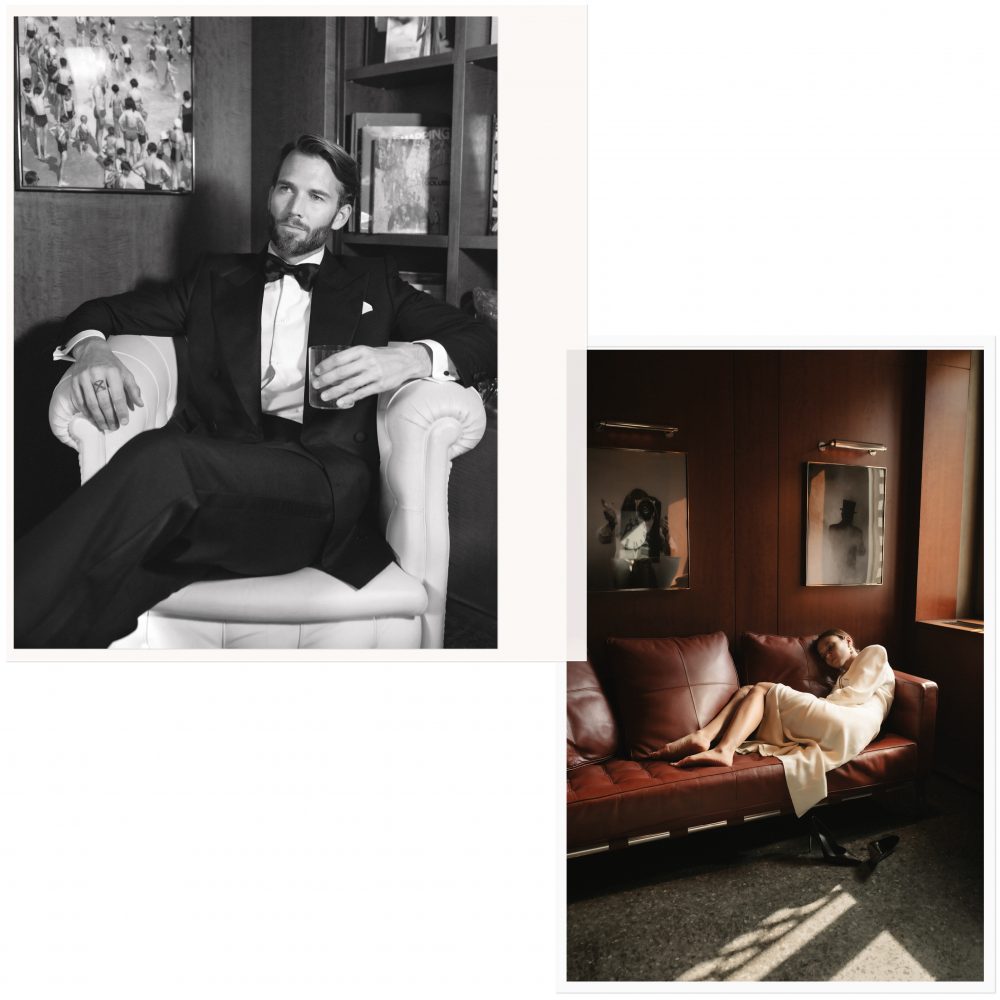 On leaving, one of the city’s biggest charms is how unusually quiet the streets become when the sun sets. As you join the maze-like alleyways and step through the empty piazzas, a chance for a night-cap emerges in the bars and rooftop terraces. The Terrezza Danieli and the Sagra Bar offer wonderful views over Venice at night-time, and from above, it always seems like a place where anything might happen and at any moment; the water and horizon fading into one another, and the mustard-lights of the vaporetto boats going to-and-fro, from the sublime of the Festival to the serenity of the Grand Canal. 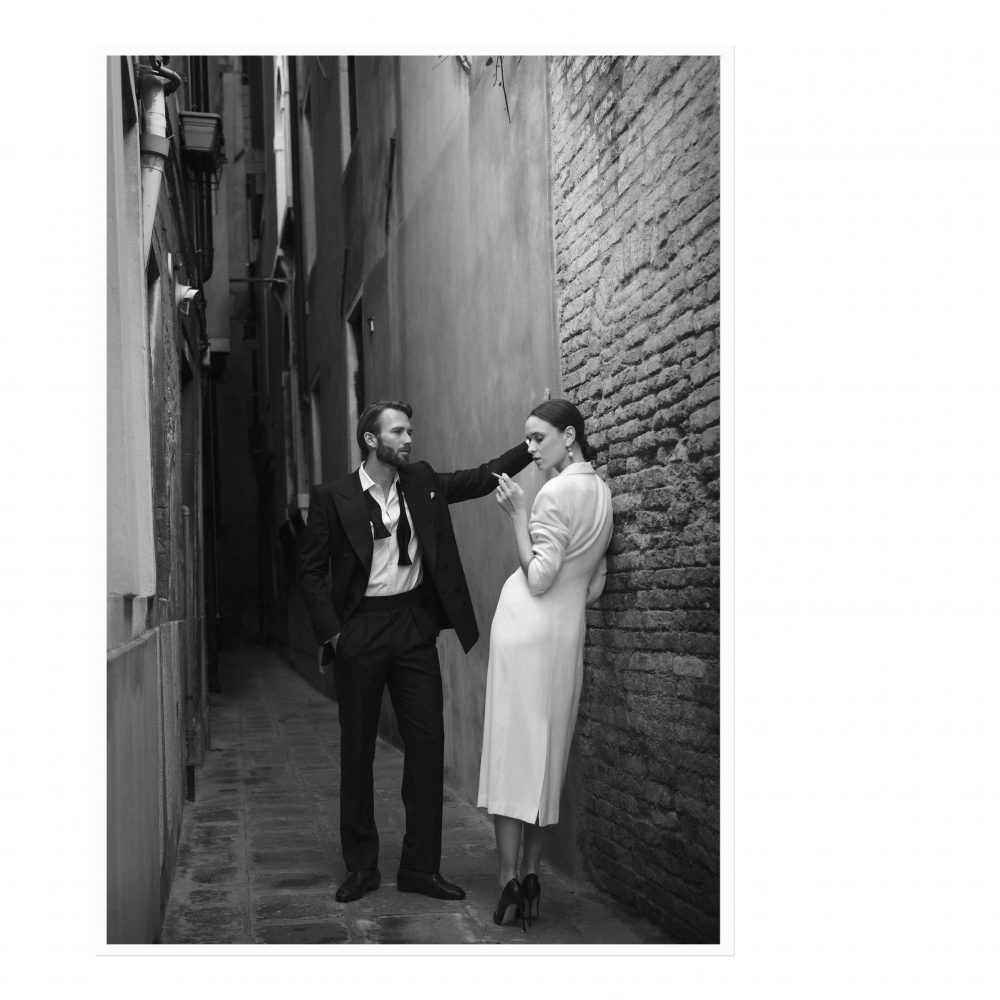 Couples walk home from their ‘Giro d’ombre’—or wine stroll. The tavern-like bacaros have a bustling atmosphere, whether you decide to visit the friendly Osteria Al Pugni or the Cantine del Vino gia Schiavi, where all customers are encouraged to drink and eat standing up; a pit-stop before the next, and then the one after that. It’s a myth that Venice is a giant tourist-trap. If you scratch the surface, turn away from the Grand Canal, real and authentic spots become easily accessible. The hip neighbourhood of Cannaregio is all the more inviting for the canal-sides that are lined with bacari, serving delicious food (our pick is the iconic Paradiso Perduto—seafood platters aplenty) and flavoursome Veneto wines. But a few short turns away from the Rialto, and the dusty tavern signs once again invite us in for something to eat or drink.

Venice is a city that mixes its own grand opulence with down-to-earth sensibilities. Sure, the central streets are flooded with tourists—and consequently, overrun restaurants and gift shops bait the naive visitor. But as the writer Italo Calvino once wrote about Venice, “...you take delight not in a city’s seven or seventy wonders, but in the answer it gives to a question of yours.” If you intend to discover the real Venice, the answer will meet you in the beauty of its museums, canals, and softly-lit trattorias, and the resurgence of a new creative spirit that resides merely a skip-and-a-hop away from its major attractions. 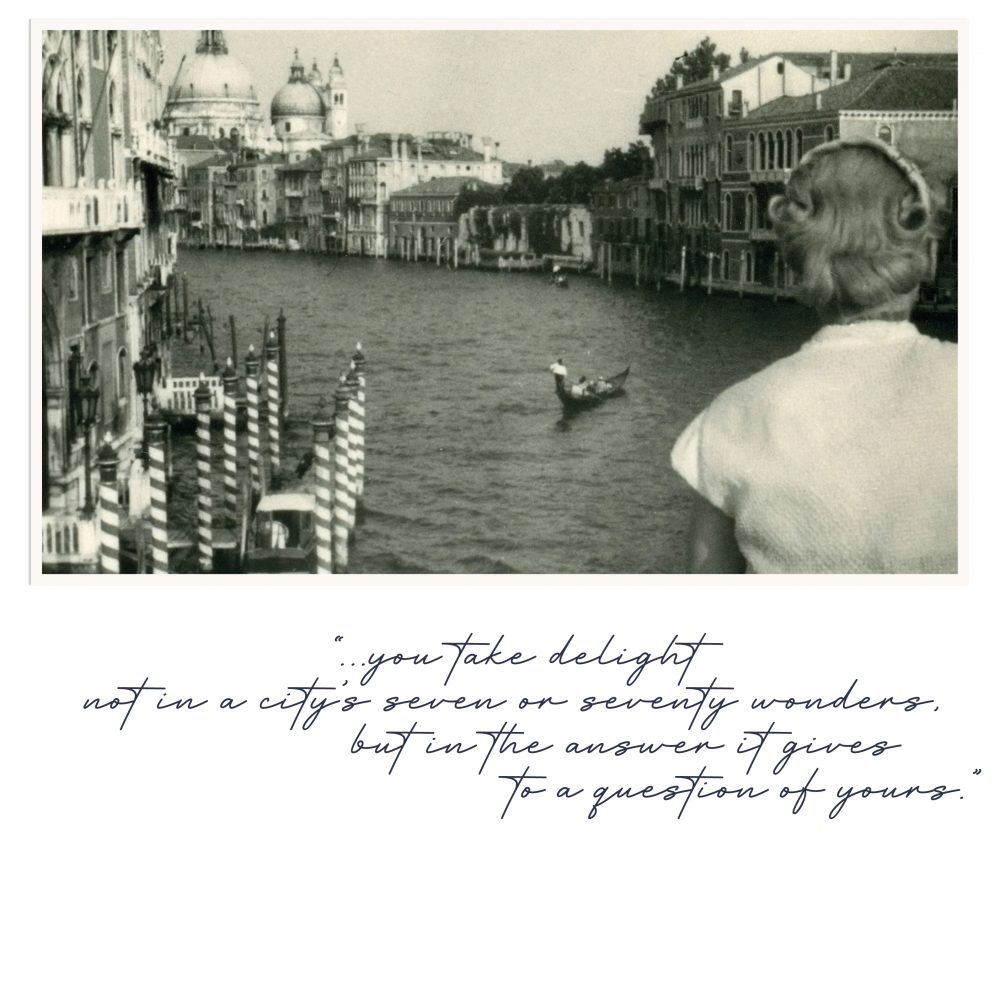 The Rake visits Venice for the Travel Journal