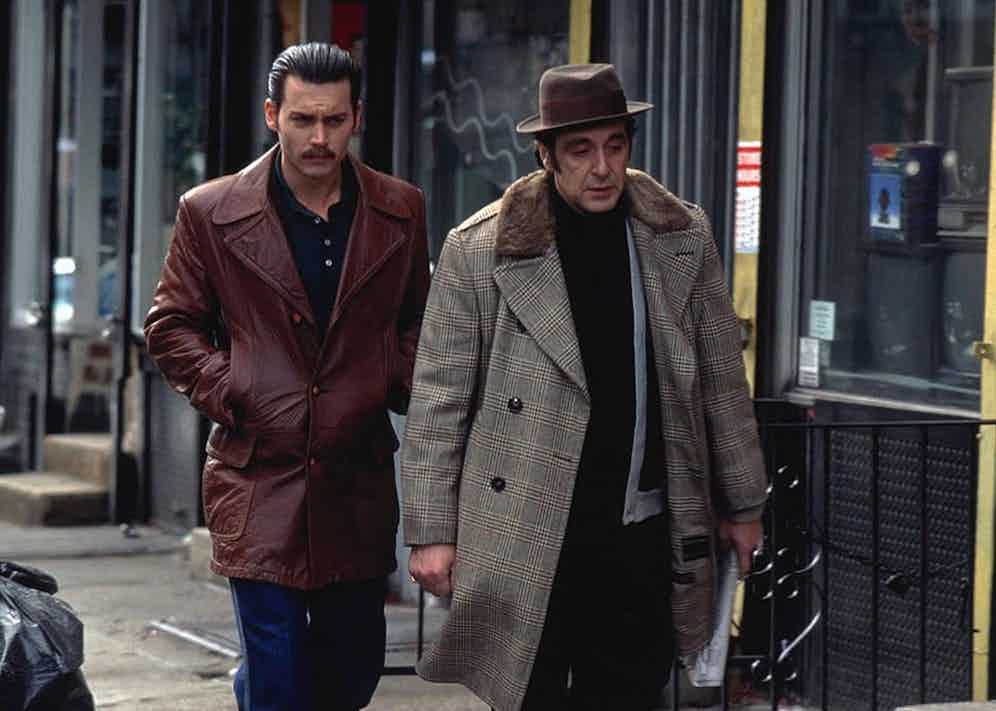 At this point, it’s no secret that Johnny Depp is hardlyHollywood’s golden boy. Yet,however divisive the man may be in real life, his character in Mike Newell’s 1997 gangster film Donnie Brasco has at least got his sartorial shit together. In the role of Joe Pistone, an undercover FBI agent infiltrating the Mafia as “Donnie Brasco”, Depp kills it in the style stakes, reminding us of the enduring appeal of the seventies – an era thatcontinuesto inform our approach to dressing today, as evidenced by the current corduroy-peppered collections of every major fashion house this season.

The success of Depp’s styling as Pistone can be largely attributed to the role of one particular hero piece: the classic brown leather coat. Such a garment has long been a staple in winter wardrobes, and for good reason: practical, universally flattering and perennially stylish, it represents a certain self-assuredness, a trait embodied, of course, by the smooth-talking, slick-haired Pistone.

The particular style of coat sported by Pistone is very much of its time: single-breasted, wide-lapelled and extending to upper thigh.Costume designers Aude Bronson-Howard and David Robinson created a pared down, polished yet casual aestheticfor Depp’s character, teaming the leather coat with dark blue denim creased-front jeans, a forest green knit polo shirt and worn-in black leather Western-style boots. Simplicity is key to the success of this ensemble: the coat does most of the talking, while the addition of a few understated accessories, such as a pair of gold-framed aviators and a single Claddagh ring, contribute to the appeal.

The classicality of Pistone’s attire allows for effortless emulation. Simply invest in high-quality vintage-inspired pieces that will endure as staples for seasonsto come. For a contemporary iteration of Pistone’s iconic coat, look to renowned British label Cromford Leather Company: its sleek Eastwood coat – a double-breasted reddish brown number with brass buckles – brings timeless sophistication to any outfit, be it casual weekend garb or more formal wear. Pair with a luxurious polo shirt from King & Tuckfield and dark denim jeans from the east London-based Blackhorse Lane. It’s a throw-on and go kind of outfit that requires minimal investment of time and energy - perfect for a man on a mission.