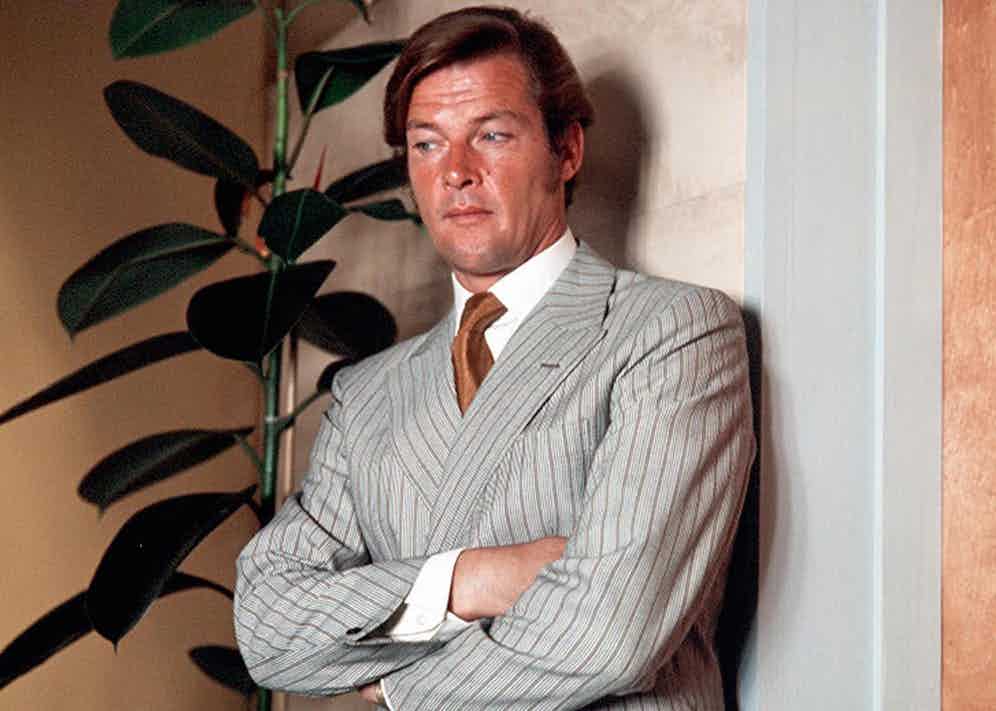 Just before his big break as Britain’s most famous secret agent, Roger Moore undertook the role of Lord Brett Sinclair, a British upper-class toff in the action-comedy TV seriesThe Persuaders!. The plot follows two bored playboy millionaires – Sinclair and roguish American Danny Wilde, played by Tony Curtis – who find themselves forced into a partnership solving crimes. Competing with picturesque European locations and irresistible cars – including an Aston Martin DBS – is an undeniably thrilling wardrobe, which perfectly grasped the 1970s sartorial landscape with wide lapels, frilly shirts and loud neckerchiefs. And while both characters exude a certain stylistic prowess, it is Sinclair’s fine tailoring and whimsical flare, designed by Moore himself, that stands out.

Crafted by London tailor Cyril Castle, this double-breasted suit has a cream base topped with a blend of soft biscuit brown stripes and thinner slate-grey stripes, a highly unusual design which differs to a typical chalk or pinstripe. The suit has a light-hearted and almost comically formal appearance, which is heightened by the softly-padded roped shoulders, wide peaked lapels and flared cuffs.“I'd discuss with my tailor various things, basically classic, but trying to bring in an early ‘70s look,” Moore toldThe Independentin an interview. To easily refresh this retro aesthetic, opt instead for a suit with a more relaxed, fluid and contemporary silhouette and gently-tapering trousers, such as Orazio Luciano’s chalk stripe two-piece. Pair it with a white spread collar shirt and rich amber-brown silk tie, like Sinclair does to complement both the undertones of his suit and his considered tan.Throughout the series, Moore also wears a beige double-breasted overcoat along with numerous bold neckerchiefs – complete the look with this intricate piece from Rubinacci and a pair of chestnut brown leather driving gloves, which will come in handy, Aston Martin or not.