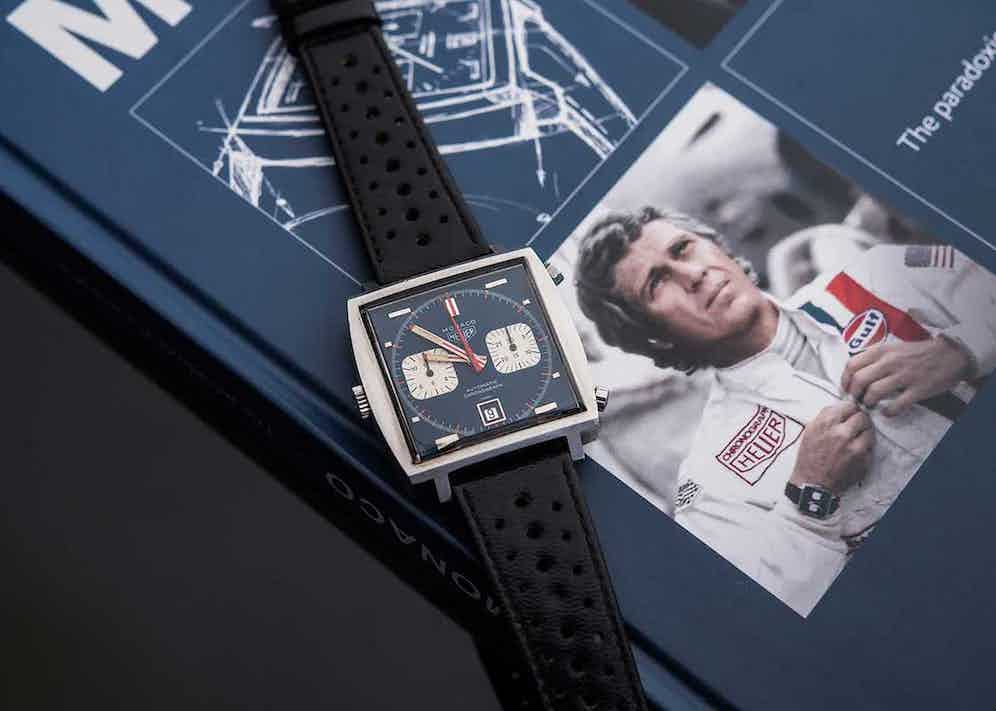 The story of the Heuer Monaco began in 1969 with the introduction of a square cased watch, which was water-resistant to 100 meters. Powered by Calibre 11, another great name from the 20th-century history of watchmaking, the Monaco with its peculiar shape and aura was all set to become an icon in the world of sports watches.

Technically, it was not short of revolutionary. A monocoque caseback embedded the movement and had four notches on the outsides at 12 and six o’clock. The top-case held a square glass with a rubber seal underneath. The two pieces clicked in place and made the unusual construction waterproof. Heuer called the new Monaco in their period advertising materials with a Swiss sense for understatement simply: “Avant-garde. Le seul cronographe automatique carre du monde!” (Translation: “Avant-garde! The only square, automatic chronograph in the world!”) Aligned to the name and very promising was the second tagline: “Monaco — partout a sa place: aussi bien au volant d’une voiture de course formule 1 qu’a la soiree de gala du Casino!” (Translation: “Monaco — has a place both at the wheel of a Formula 1 race car and a gala evening at the casino!”) 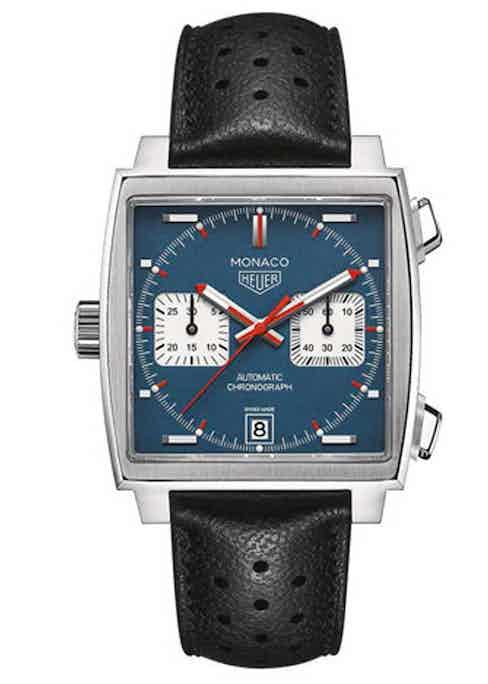 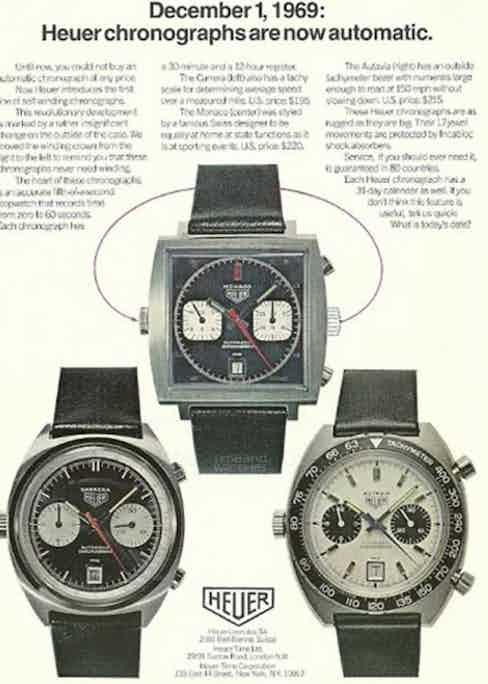 During the mid ’60s the average watch size was between 34 and 36 mm. Hence the style of the Monaco hit a conservative watch world like a bomb, polarising to say the least, a kind of love or hate relationship for most until today. Beyond any doubt, the design was bold, edgy, with alternating brushed and polished surfaces as well as convex and concave sides.

The utterly striking case was eye-catching and big at 40mm by 40mm. The so-called Steve McQueen version from 1970 revealed a stunning blue dial. Depending on light conditions and angle the blue could change from indigo to steel or from sapphire to midnight in a glimpse of a second. 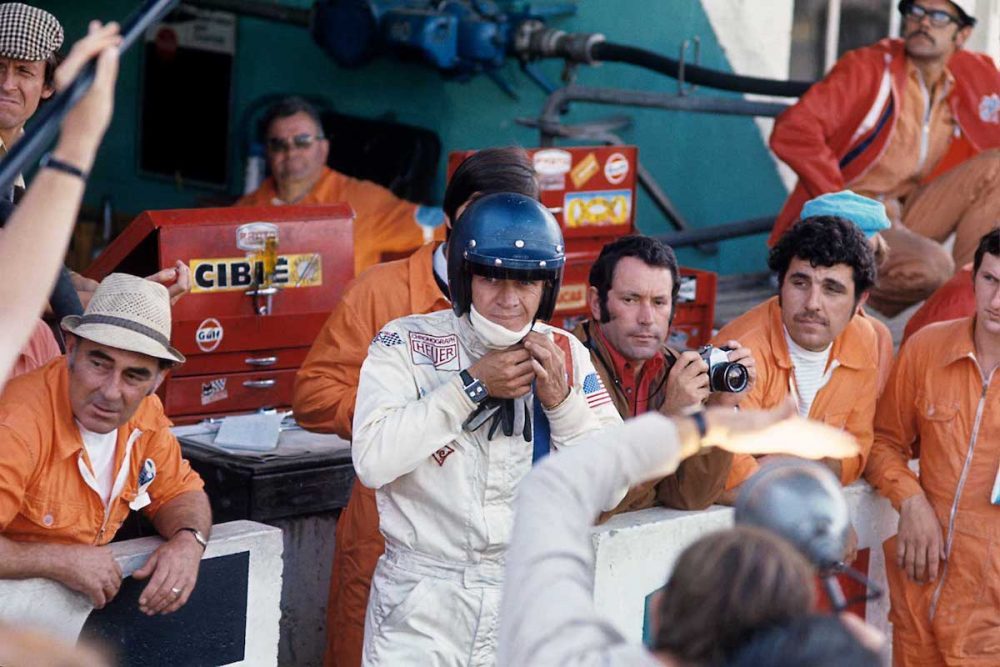 Steve McQueen styled like Joseph Siffert for the Le Mans movie, with a Monaco 1133 B on his wrist (Image: Bernard Cahier)

In recent years, the legacy of the original Monaco Calibre 11 has been represented by the base reference CAW211x. In 2009, on the occasion of the watch’s 40th anniversary, TAG Heuer introduced the CAW211A. Limited to 1,000 pieces, the brand presented this special edition in the “McQueen” color scheme —blue dial with white subdials— a 38 mm case, the crown on the left side, and chronograph pushers on the right. The dial offered the classic horizontal indexes but the pushers became rectangular instead of round as seen in the original Monaco. The caseback had a unique decoration with Jack Heuer’s signature and the edition number. Hidden under this decoration was the in-house Calibre 11, a modular movement based on the Sellita SW300 and a Dubois-Dépraz module. This was a nice coincidence that echoes the original Calibre 11 and its chronograph module, a Dubois-Dépraz as well. 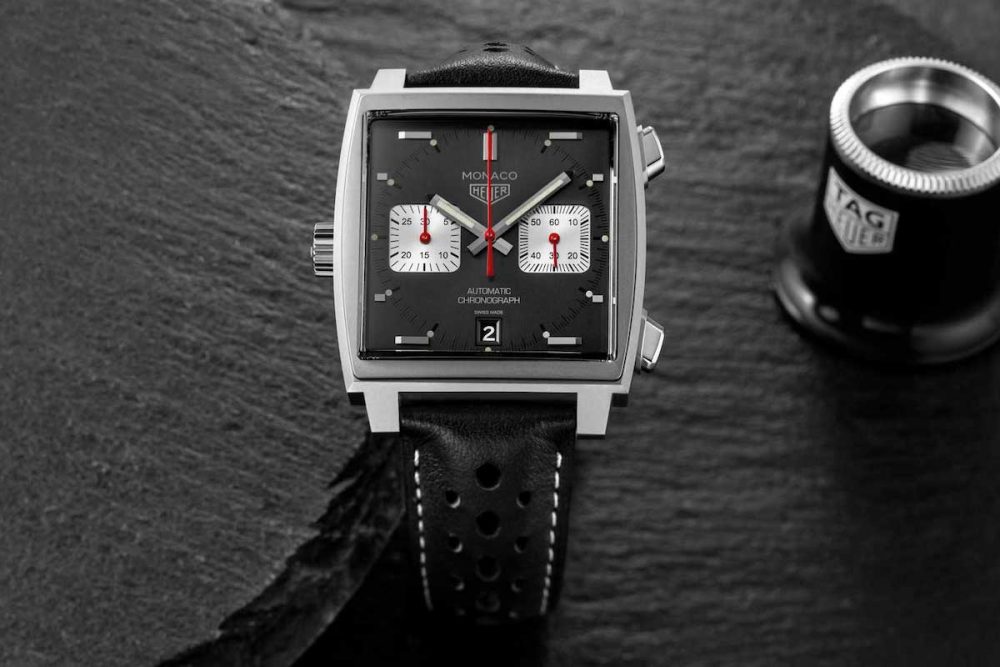 The general formula for the reissued Monaco Calibre 11 from 2009 has remained the same to this day. Only the colour variations in dials, cases and transparent casebacks have been the most important differentiating features from the 2009 ‘A’ model. This includes the 50th anniversary special editions from 2019.

The present example of the Monaco in our shop is from 2018 and just like Steve McQueen’s original Monaco blue dial 1133B seen in the movie Le Mans, this one also has a blue dial, same horizontal indexes, a crown positioned at 9 o’clock and a similar racing strap. Powered by automatic calibre 11, the watch comes with its original set of box and papers along with a two-year warranty from Watchfinder. 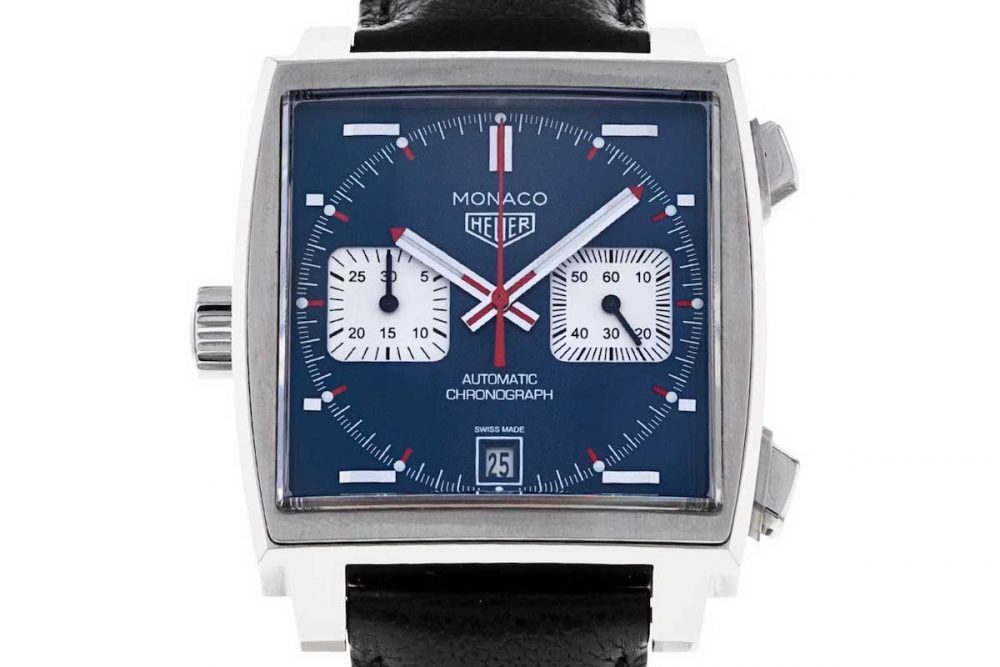 Just like Steve McQueen’s original Monaco blue dial 1133B seen in the movie Le Mans, the present example from 2018 also has a blue dial, same horizontal indexes, a crown positioned at 9 o’clock and a similar racing strap. 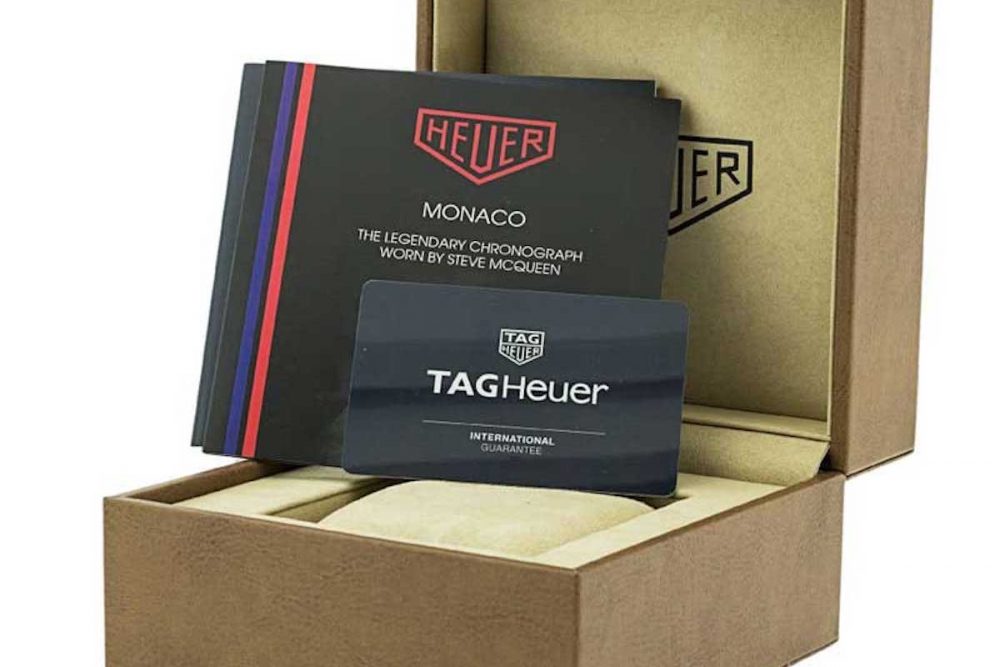 The watch comes with its original set of box and papers along with a two-year warranty from Watchfinder. 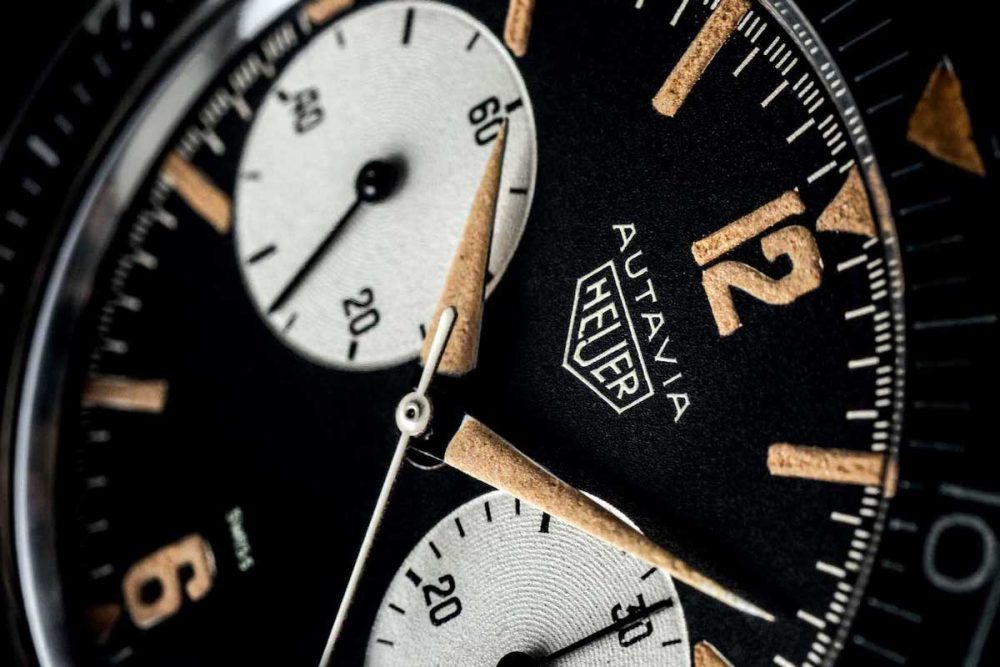 The original 1962 Autavia was offered in a choice of two- or three-register models, both of them manual-winding chronographs with black and white dials in round stainless-steel cases. By the end of its run, however, the Autavia had been produced with a dazzling array of dials, cases, hands, movements, bezels and bracelets.

Around 1968, Heuer introduced its first Autavia GMT chronograph, which resided in a screw-back case. In addition to the standard hour and minute hands, there is a GMT hand that makes one revolution in 24 hours. This GMT hand may not be set independently of the primary hands, but the bezel is rotated to the appropriate plus/minus position and the time in a second time zone is determined by reading the GMT hand’s position on the bezel. The movement is the Valjoux 724, a modified version of the Valjoux 72. 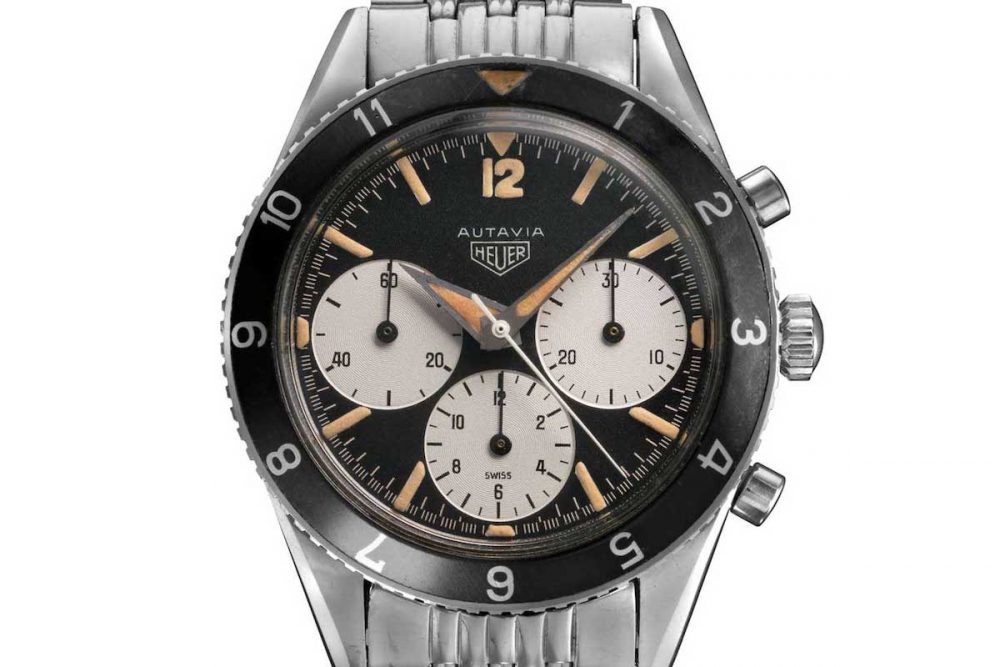 In 1968, Heuer changed the Autavia case from the screw-back configuration to a snap-back design “compressor” case. 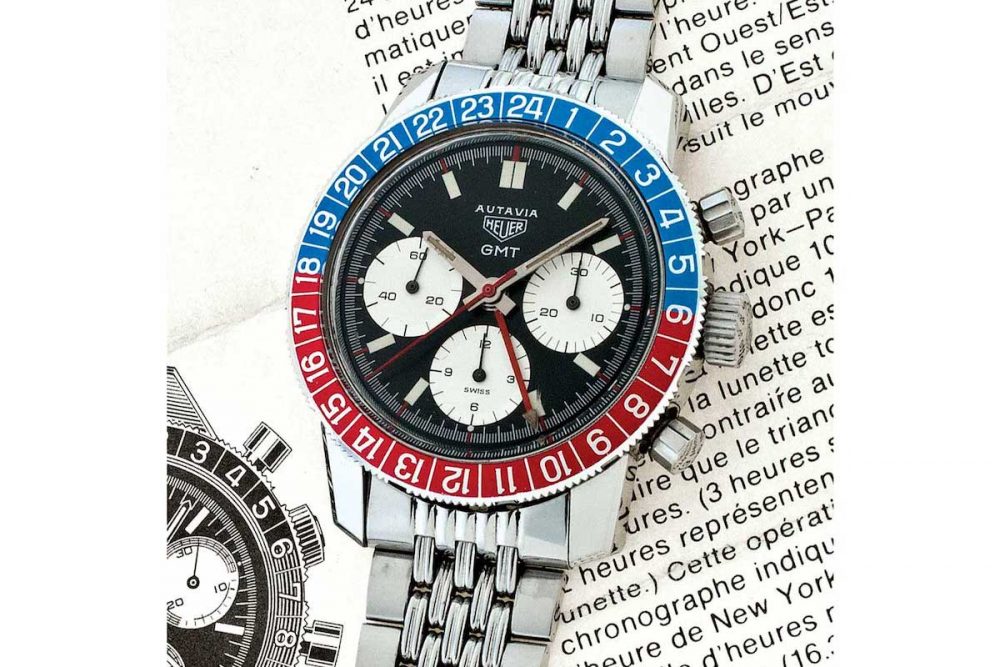 The Autavia GMT chronographs made the transition from screw-back cases to compressor cases around 1969.

As Heuer transitioned the Autavias from screw-back cases to compressor cases, the Autavia GMT chronographs made this same transition, moving to the ref. 2446C compressor case in around 1969. Uniform features for the GMTs included a bright “Pepsi” bezel, with all 24 numerals, with the night hours (19 to 5) on the blue area and the day hours (6 to 18) on the red area. There were also painted luminous markers for the hours, and a triangular tipped GMT hand.

The compressor-cased GMT Autavias followed the same basic evolution as the standard models, with the hands going from plain polished steel to more colourful hands, with red inserts and tips. The bright white registers grew from being smaller, in the earlier executions, to becoming larger, in the later ones. 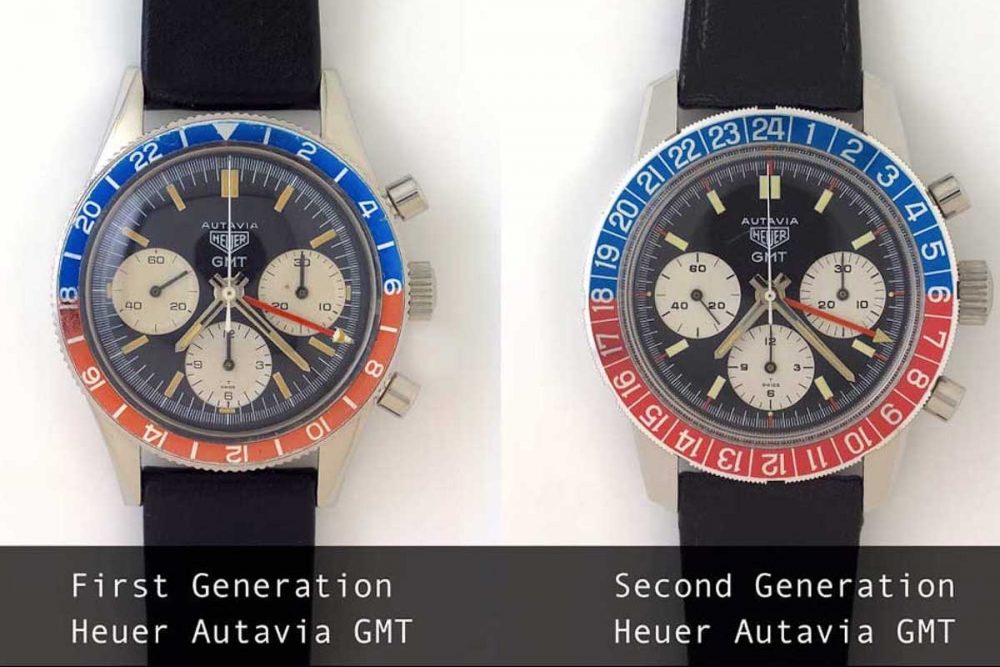 The second-generation Autavia was only on sale for less than two years between 1968 and 1969 (Image: Calibre 11)

The present example of the Autavia in our shop is from 2000. The watch features white oversized sub-registers that contrast beautifully with the black dial. The most attractive characteristics of this Mark 4 dial are the steel hands with red accents and the red chronograph hand. The hour markers are applied with tritium lume, together with red index markings. Heuer used a modified Valjoux 724 in these 40 mm GMT watches, which were sealed with compressor cases for better water resistance. The other highlight of these rare chronographs are the blue and red ‘Pepsi bezel’, manufactured from a single piece of aluminum. 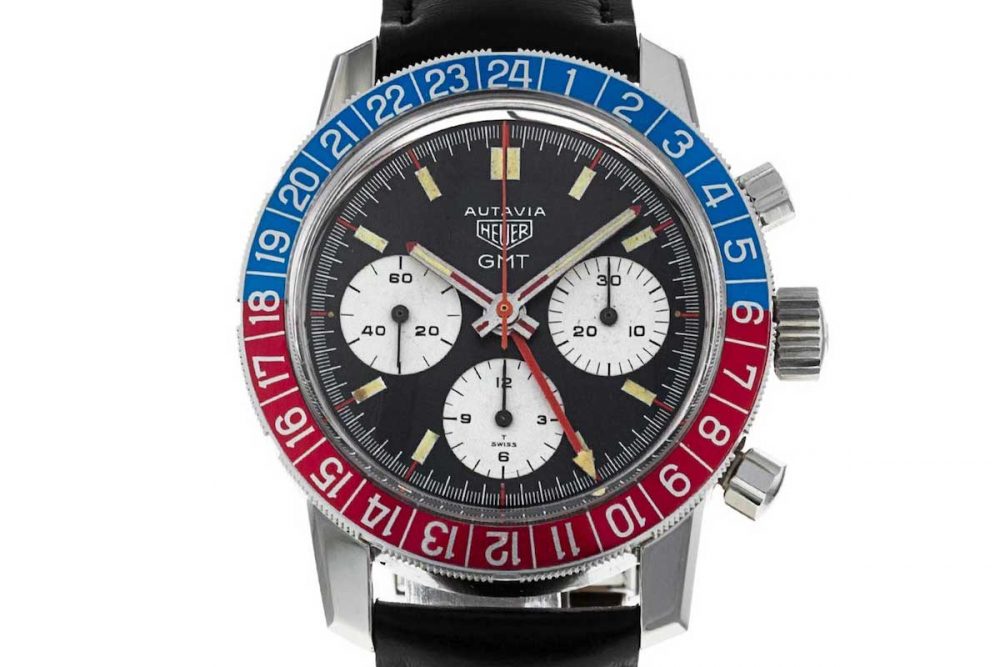 The present example of the Autavia in our shop features white oversized sub-registers that contrast beautifully with the black dial.

Autavias Over the Years

The first execution compressor model was the only early Autavia to feature a true “panda” dial design – a silver dial with either two or three black registers. These dials are thought to have been an early test for the American market (circa 1968), and it appears that these models never went into production. These silver-dialled versions of the two and three register Autavias are housed in the same cases as the standard models.

The original 1962 Autavia was offered in a choice of two- or three-register models, both of them manual-winding chronographs with black and white dials in round stainless-steel cases. By the end of its run, however, the Autavia had been produced with a dazzling array of dials, cases, hands, movements, bezels and bracelets. 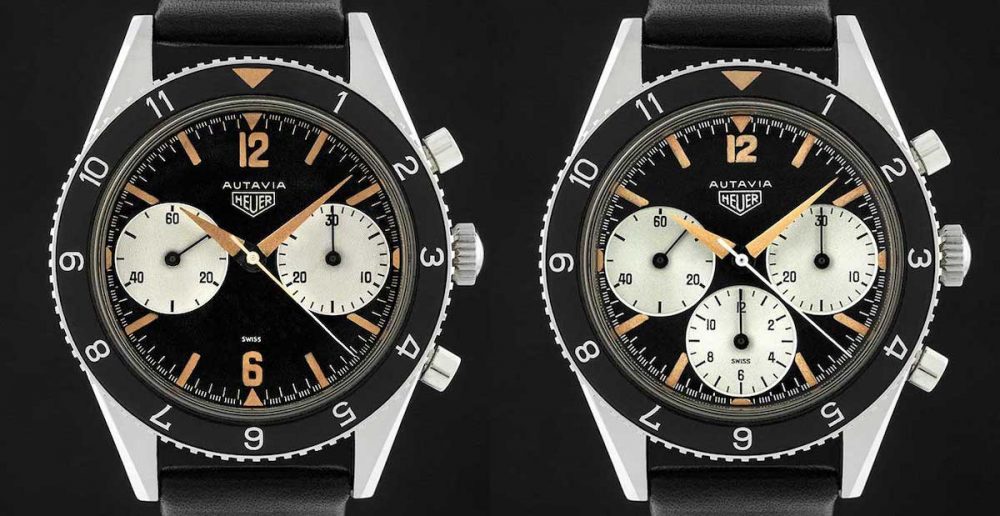 The second generation of Autavias was introduced in 1968 and it was characterised by new lugs with square edges as well as a larger bezel. These models were powered by the Valjoux 7730/7732 movements.

The third generation of the Autavia followed in 1969. The model was powered by the famous Calibre 11 housed in an entirely new C-shaped case. One thing that would not change, however, was the position of the Autavia as the chronograph of motorsport, as the Autavia would become even more popular among racers and their teams. 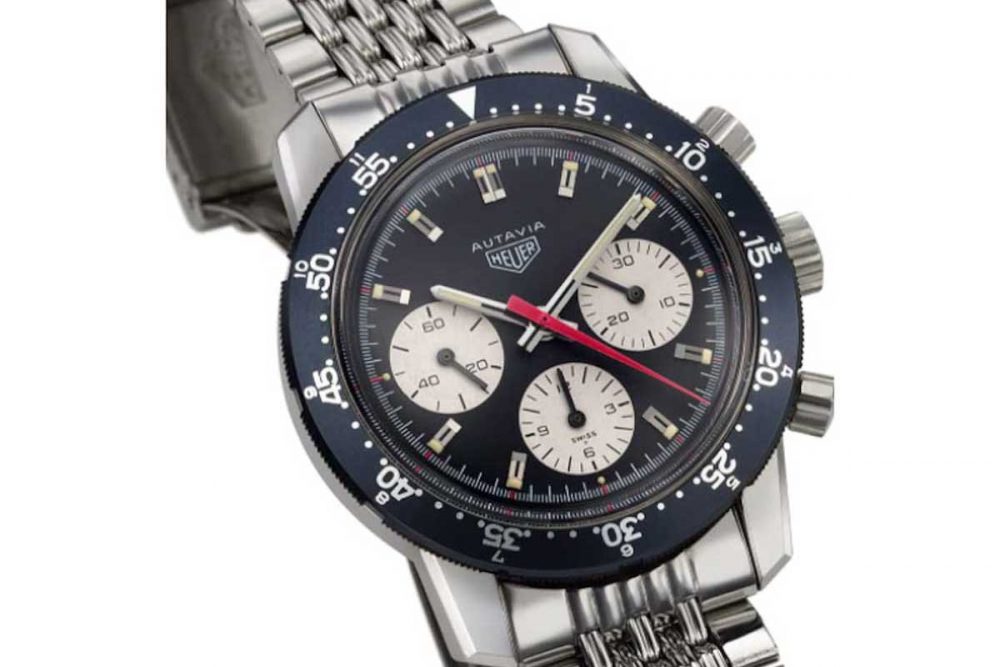 The second generation of Autavias was introduced in 1968 and it was characterised by new lugs with square edges as well as a larger bezel. 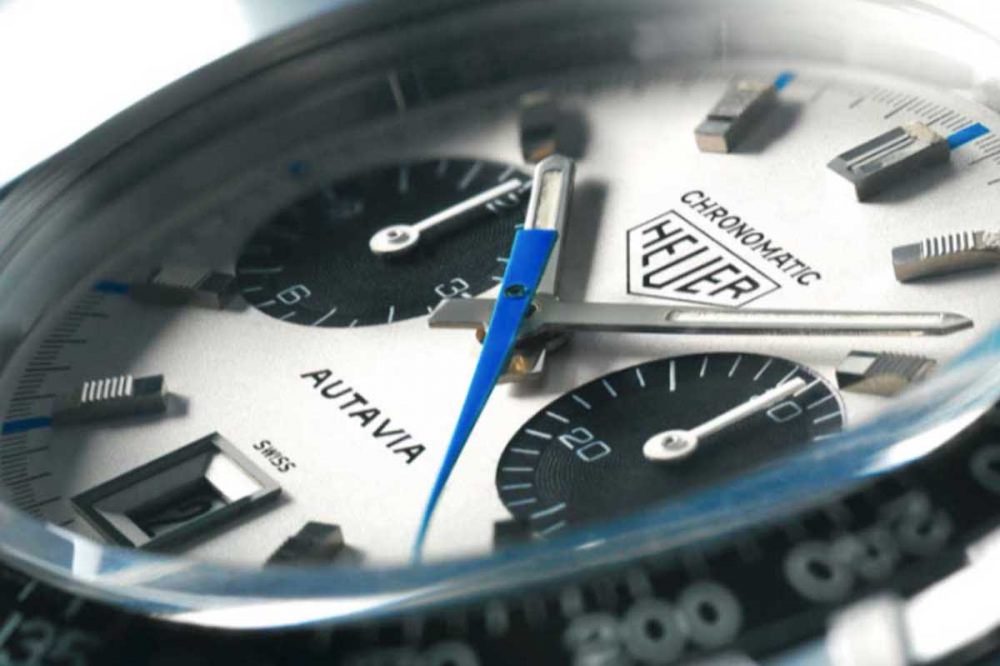 The third generation of the Autavia followed in 1969. The model was powered by the famous Calibre 11 housed in an entirely new C-shaped case

Based on the third generation Autavia, TAG Heuer launched a re-edition of the watch in 2003. This was the first Autavia to display the TAG Heuer logo. The 42 mm steel case featuring a fixed bezel with tachymeter scale housed the self-winding Calibre 11.

The Autavia – It’s All About the Bezel 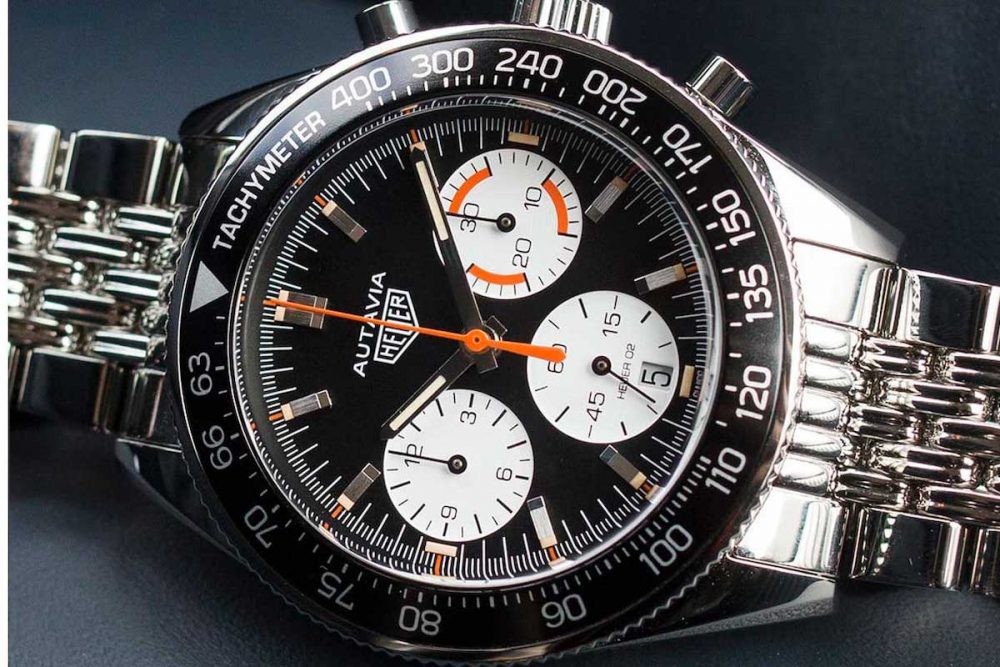 Over the course of its production from 1962 to 1985, a defining feature of the Heuer Autavia was the rotating bezel. Here, we have a look at the design and functions of this extra “tool” that added to the usefulness of the Autavia:

• Minutes – Marked from 0 to 60 around the bezel, align the triangle with the minute hand at the start of an event, and the bezel shows the elapsed time. Numerals show the count every 10 minutes.
• Hours – Marked from 1 to 12, the hour bezel can be used to count the elapsed hours or it can be pre-set so that the hour hand will show the time in a second time zone.
• Minutes/Hours – Used on the later Autavias from 1969, this bezel is marked for both minutes and hours.
• Tachymeter – The tachymeter converts the elapsed time (in seconds) over a measured distance (one mile or one kilometer) to the speed for that distance. Cover one mile in exactly 40 seconds, and the bezel shows the speed of 90 miles per hour.
• Decimal Minutes – Rather than indicating the seconds, the decimal minutes bezel divides the minute into 100 units, making it easier to add and subtract different combinations.
• GMT – Heuer’s approach to the GMT indication was to mark the bezel for all 24 hours, with a separate hand making one rotation per day. This hand may not be set independently of the watch’s main hands, but by rotating the bezel, the user is able to select a second time zone, with the time in that location being shown by reading the GMT hand on the GMT bezel.
• Decompression – The seemingly random numbers on the bezel indicate the “bottom time” that will be safe for the diver, at specific depths. Align the arrow with the minute hand at the start of the dive, and when the minute hand reaches your depth, it’s time to return to the surface.