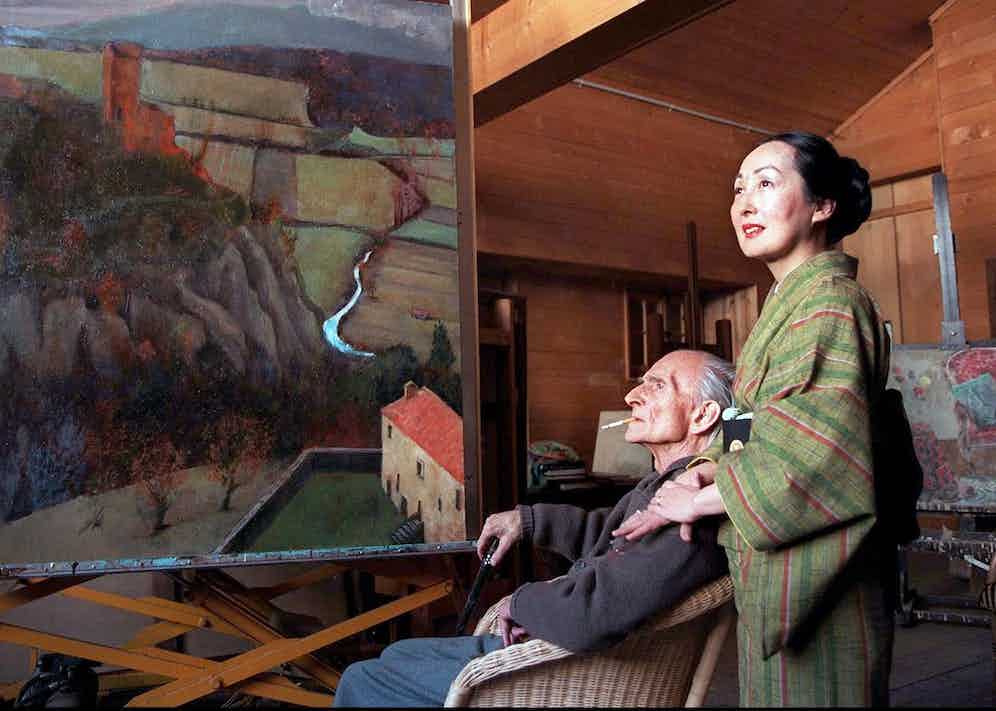 With Setsuko in their wooden chalet of Rossinière, 1998 (Photo by Raphael GAILLARDE/Gamma-Rapho via Getty Images)

To be two artists about to embark on a love affair is to be warned, by the looming shadow of history, that your union might be fraught with adversity. The clashes of movement found in Jackson Pollock’s visual cacophonies might easily be interpreted as an angst-on-canvas depiction of his marriage to fellow abstract expressionist Lee Krasner. The twisted, perhaps even cruel, portraits Pablo Picasso did of his muse, Dora Maar, reflect a union that, despite the French-Croatian photographer persuading him to join the French Communist Party in 1944, was markedly volatile.

Born of Polish parents (he also claimed to be a quarter Scottish), Balthus grew up in the 14th arrondissement of Paris as Balthasar Klossowski, the son of an art historian father and a painter mother (he later added ‘de Rola’ to his name as part of a claim to be Polish nobility). His older brother was a philosopher and writer, and the family were part of Paris’s cultural elite (his parents were friends with Matisse and Bonnard, and their walls were lined with canvases by Cézanne and Delacroix as well as their own works).

Having had his first collection of 40 drawings, titled Mitsou, published at 11 years old, he spent much of his youth studying any art that resonated with him — Piero della Francesca’s frescoes in the galleries of Florence and tempera wall paintings in the Protestant churches of Switzerland were among his favourites — before moving into a Paris studio at the age of 25. 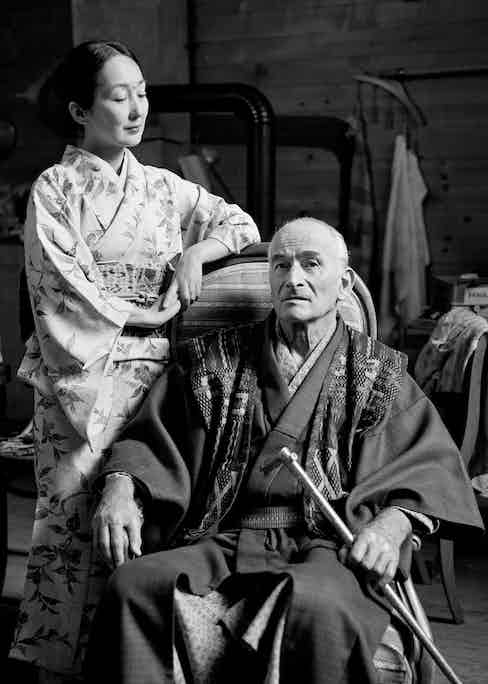 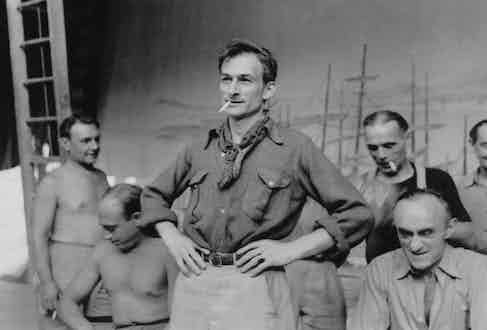 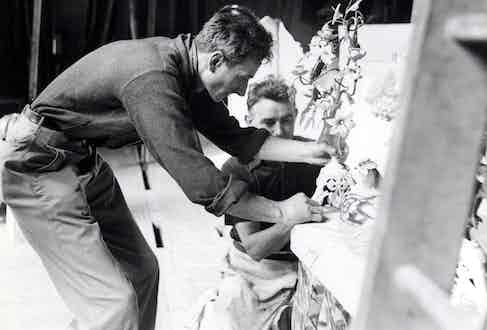 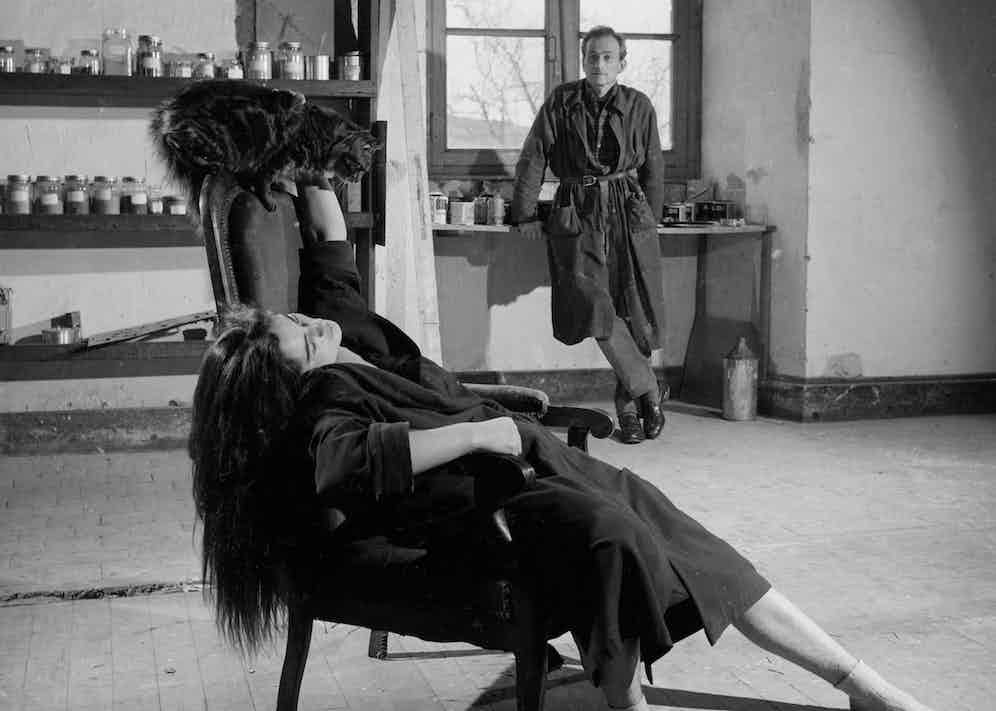 Indifferent to the contemporary styles of the era, notably Cubism, Balthus embarked on the works that would make up the 1934 Paris exhibition that launched his career, including the painting that remains his most famous — and, indeed, infamous — to date: The Guitar Lesson. Mounted for 15 days — behind curtains and hidden away in the gallery’s back room — the work depicts a child lying across her music teacher’s lap in place of the instrument, which is placed on the floor. The two figures’ pose echoes ‘Pietà’ (Christian art depicting Christ’s corpse being cradled by the Virgin Mary), a connotation subverted by the positioning of the teacher’s hands, which suggest that a vaguely violent sexual initiation rite is about to unfold, against which the child is disinclined to struggle.

More than any other major painting that stands charged with putting art’s neck into a leather leash and leading it into lurid, gratuitous or sadomasochistic realms of erotica — Henry Darger’s troubling depictions of childhood, Gustave Courbet’s close-up of female genitalia, Dali’s The Great Masturbator, to name three — The Guitar Lesson seems to have offended, or perturbed, a vast number of people who have set eyes on it.

“I remember I was very poor,” was Balthus’s own take on the work several decades later. “The only way to get out of that state was to make a scandal. It worked well, too well.” These are peculiar words for a man so averse to publicity he once responded to a request from Britain’s Tate Gallery in 1968 for biographical information to go in an exhibition catalogue by writing: “No biographical details. Begin: Balthus is a painter of whom nothing is known. Now let us look at the pictures. Regards, B.”

The Guitar Lesson was just one of a number of Balthus’s works that showed a preoccupation — an unhealthily sexual one, some would assert — with young females. Even the at-a-glance innocuous street scene depicted in La Rue features, on the left extreme of the canvas, a teenaged girl being groped. Meanwhile, Alice Dans Le Miroir is a prurient take on Lewis Carroll’s novel, and Girl and Cat (1937) was, for some time, the cover of the Penguin paperback version of a literary work that, like Balthus’s oeuvre, prompted uncomfortable reactions with its approach to prepubescent femininity — Nabokov’sLolita. 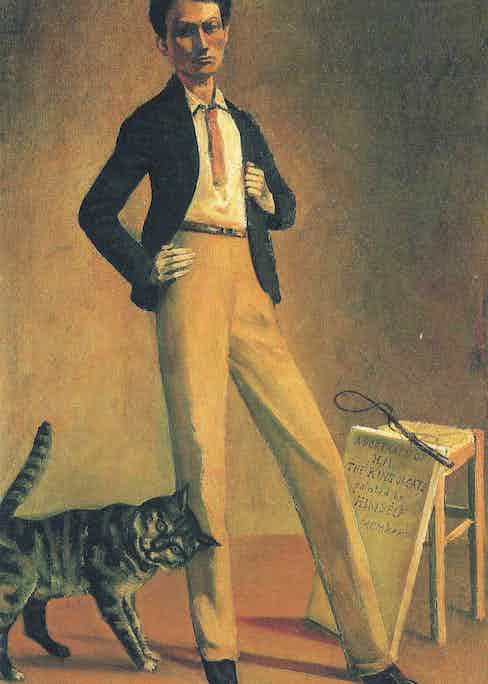 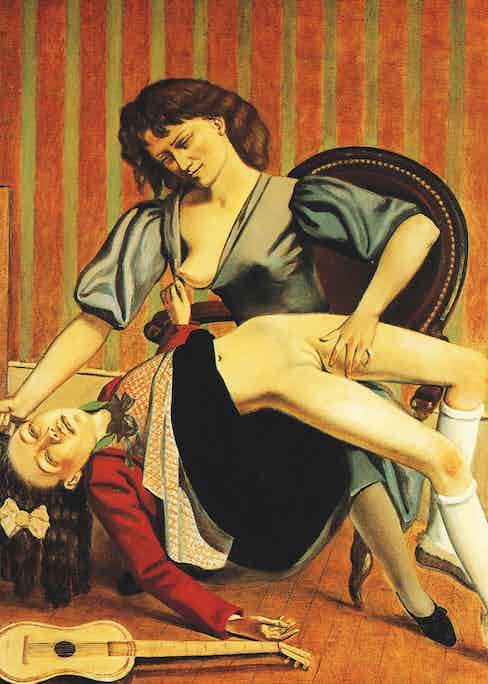 With the public becoming suspicious of Balthus’s preoccupation with ‘la jeune fille’, it was inevitable that many observers would nod their disapproving consensus in zealous unison when a relationship between him and a woman 35 years his junior blossomed after the pair met in Tokyo in 1962.

Setsuko was born in Tokyo into an ancient samurai family from Kyoto. The pair’s paths crossed when Balthus was sent to Japan by André Malraux, then France’s first minister of cultural affairs, to choose traditional Japanese artwork for an exhibition in Paris. Setsuko Ideta was 19 years old — the same age as the first of Balthus’s two sons, Stanislaus, he’d already had with his first wife, Antoinette de Watteville — and a first-year student at Sophia University, a Jesuit research institution in Tokyo.

Serving as a translator to the group as it toured the temples of Kyoto, Setsuko immediately caught the eye of the 54-year-old (who shaved four years off his age to make the age void between them seem fractionally less gaping). In his book Balthus: A Biography, Nicholas Fox Weber describes Setsuko in vivid terms that are nonetheless troubling in terms of their global-regional gender stereotypes: “[She] was the embodiment of much that he cherished: female beauty, youthful vitality, piercing intelligence and the charms and diffidence of the Orient... ”

Setsuko herself recalls their meeting in a way that hints that Balthus saw his new love as something of a blank canvas: “We talked and talked. Balthus knew so deeply about Japan, much more than me. He had a longing for Oriental culture. [French author André] Gide, who was a family friend, had taken him to see Japanese Noh theatre. [He] adores all things Japanese. It’s he who made me put on the kimono — yes! It was his artistic view. He said the Japanese woman is made to wear a kimono.”

At that time, many samurai-descended families in Japan practised arranged marriages — an idea that appears to have appalled the young, newly lovestruck Setsuko. “Can you imagine?” she later said. “The families go to the restaurant, talk, then one has to decide? I wanted to escape. I told my mother, ‘I will really give my life to the most difficult, most dramatic, most impossible love’. I was very into Tolstoy, Stendhal, reading them in translation.”

Balthus was still married to a wife he had been estranged from for two decades, which didn’t make things simple. “I had five very, very difficult years until my wedding,” as Setsuko put it later. “The first wife agreed to the divorce. I was very thankful to her. But there was another girl attached to him, a terrible complication, and I had an adventure with another man. He wanted to be with me. But the next day, I receive the proposition of marriage from Balthus.”

By now, Balthus had been appointed director of the French Academy in Rome by his friend Malraux, and the couple remained in the Italian capital for 16 years, during which time Setsuko gave birth to their daughter, Harumi. In 1977, though, they returned to Balthus’s native Switzerland and embarked on a halcyon period of ultra-civilised peacefulness and high living. Harumi — these days a designer who conceives jewellery pieces for Chopard, Boucheron and the like — has a repository of glamorous childhood recollections: artists and other ultra-hip bohemians glamming up the soirées in the vast family chalet; being photographed by Henri Cartier-Bresson; entertaining the likes of Federico Fellini, Victor Hugo and the Dalai Lama; and witnessing David Bowie interview her father for some specialist art reviews in Britain. Meanwhile, Balthus’s dealer was Pierre Matisse, son of Henri. 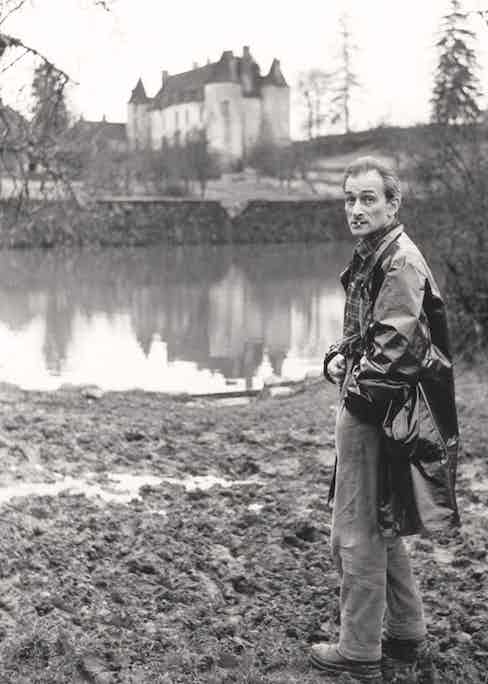 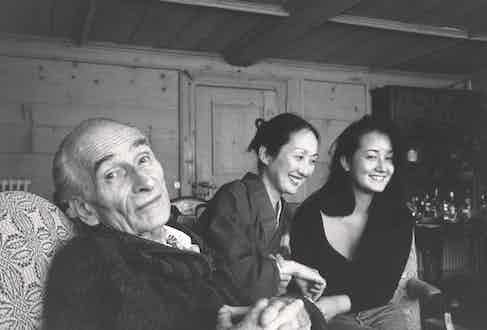 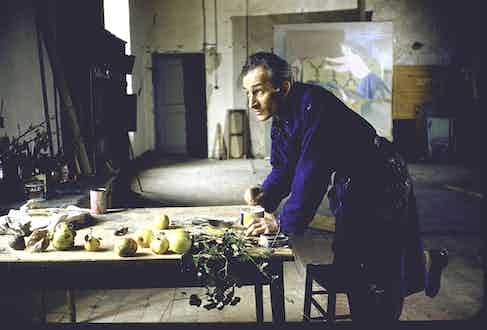 The family home, Le Grand Chalet at Rossinière, is the largest known all-wooden structure of its kind in Europe, constructed between 1752 and 1756. Comte Balthasar Klossowski de Rola — to give him the full name he took to his grave — saw out his final days in this Swiss nirvana, still wheeling across the road to his studio aged 92 and painting into the late afternoon, sucking on cigarettes incessantly between applying his brush strokes. It was to remain Balthus’s home until he died there in 2001, aged 92. Prince Sadruddin Aga Khan, Elle Macpherson and Bono (their daughter’s godfather) were all in attendance at his funeral, which was held in the nearby village.

So what exactly made this union so congruent, so mutually life enriching? Writing in The Guardian, having met Balthus the year before his death, Nicholas Glass wrote: “She is his guardian, his memory and sometimes probably his eyes. She organises the chalet, its Asian staff, the Chinese doctor in almost constant attendance. When she is not in the room he looks for her, calls out for her like a little lost boy. She tidies him up for the interview, finds a silk scarf to hide the T-shirt, stands behind me to help him with the questions.”

Naturally, many an inquisitive reporter has wanted to know what Balthus’s widow now feels about his predilection — albeit a creative one — towards tender-aged females. Not least when it transpired, after his death, that with very few people in the art world having been aware of it, he’d taken nearly 2,000 Polaroids of a girl called Anna Wahli, the youngest daughter of his doctor (merely studies for his paintings — old age had made his hand joints too stiff to do preparatory sketches, and were never intended for public view).

Setsuko has tended towards being sanguine on the subject, albeit a little confrontational when it comes to the more louder accusations of deviancy (one critic once wrote, “Balthus is a giant — but to most people he’s the fellow who paints little girls showing their panties”). “It’s other people’s opinion and they have a right to that stupid opinion,” she once told the South China Morning Post. “[Do I worry about] paedophilia? If it is not true, then what’s wrong? Balthus totally has another vision.” Aristotle once described the aim of art as being “to represent not the outward appearance of things, but their inward significance”, and Balthus’s work, Setsuko believes, is testimony to the divinity and truth of erotica, and no puritanical qualms about it should obscure that truth.

Whatever one’s judgment on the amatory nuances of Balthus’s body of work, its luminosity and emotional complexity — he is arguably the last master of figurative art — cannot be dismissed, and Balthus’s legacy thrives on the walls of the Louvre, the Tate, the Metropolitan Museum of Art in New York, and in private collections such as those of the Agnelli and Niarchos families.

Setsuko, an artist in her own right and an ambassador for the United Nations’ cultural organisation, Unesco, presides over the Fondation Balthus, whose endeavours include preservation of his annex studio (still cluttered with pigments, brushes and unfinished works) and the Balthus Chapel in Rossinière, which displays documentary films as well as reproductions of photographs, letters and smaller works.

Her reverence towards her husband’s work seems as intense as ever, and his heritage and legacy has become pretty much her raison d’être a decade and a half after his death. All in all, it remains, albeit now posthumously, a union that undermines all the scoffing and predictions of nuptial doom that age gaps seem to attract. Their story is certainly an antidote to the notion that artist couples are doomed to implode under the pressure of the protagonists’ fiery existential idiosyncrasies.

This article originally appeared in Issue 47 of The Rake.