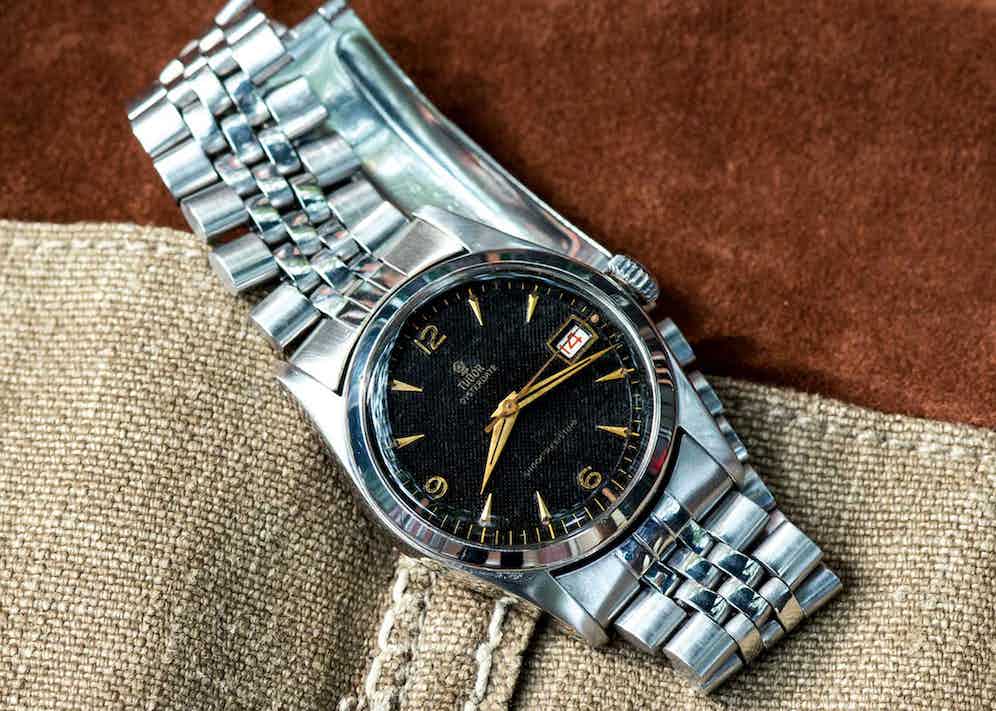 The world of horology would be a lot poorer were it not for one man: Mr. Hans Wilsdorf. He was the founder of two of the most significant and enduring watch brands, namely Rolex and Tudor. While the former was created as a high-end luxury brand, the latter was realised as a more utilitarian cousin to the coroneted head of the family.

Over recent years, however, the Shield (or sometimes Rose) has risen up to become one of the hottest collectable brands on the vintage scene. Tudor has a wonderfully rich history of which they are rightly proud, celebrated through the hugely successful Heritage watches. The Tudor Heritage releases have been an annual highlight at Baselworld since the Heritage Chronograph (based on the legendary Tudor “Homeplate” Chronograph from 1971) was launched in 2010. But where did it all begin? 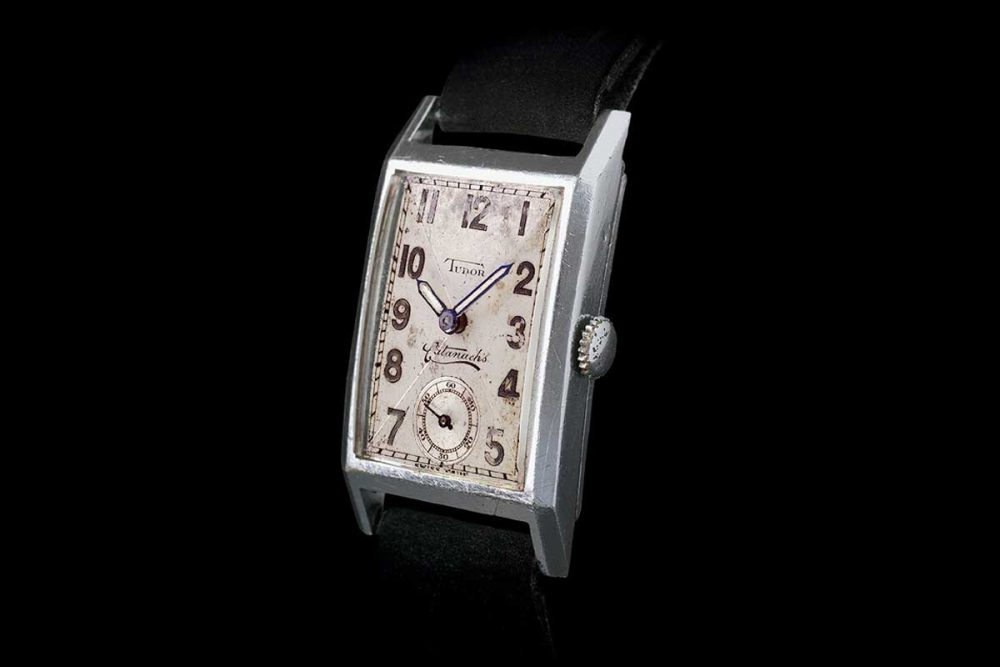 The “Long T” – the right-hand side of the T extended over the top of the rest of the logo. (Image: Tudorwatch.com)

The Wilsdorf team initially registered the name Tudor in 1926 and the first branded timepieces started to appear as early as 1932 in the form of rectangular and cushion-shaped wristwatches. These very first pieces were typically Art Deco in their styling and featured a distinctive logo that collectors now refer to as the “Long T” – the right-hand side of the T extended over the top of the rest of the logo. All these pieces contained Tudor-marked movements and dials, but were housed in cases from a number of casemakers including the Rolex Watch Company (RWC) and Hadley. The watches were very successful in Australia, where they were predominantly retailed by Catanach’s, the country’s oldest family-run jewellery business. In fact, many of the watches retailed featured “double named” dials, where both Tudor and the retailer’s name are printed on the dial.

Following on from these market tests, Montres Tudor SA was formally launched in 1946. Tudor is arguably best known for two watch families – the Submariners and the chronographs. Both models are tool watches; the Submariner was produced for divers (a tool of their trade) and the chronographs generally for timing motorsports. But before either of these key lines were launched, Tudor was producing simple and elegant time-only watches that bore a legend of the Wilsdorf house’s greatest achievement – “OYSTER”.

A Case for Tudor

Tudor Oyster timepieces started to appear in 1946 as manual-wind watches. Most were housed in 34mm steel Oyster cases and featured a vast array of dial variations. In 1952, the “Oyster Prince” was introduced. Prince signified the presence of an automatic movement and was Tudor’s equivalent of Rolex’s “Perpetual”. These automatic movements were modified by Tudor but, based on the Fleurier Calibre 390. They were — and are — one of the most robust movements one could imagine; bulletproof almost!

I have discovered a number of these watches over the years, some of which have never been serviced but still work perfectly and keep excellent time. From the very outset Hans Wilsdorf was clear that these watches would be of the same impeccable quality and reliability as Rolex. He had two key elements that he’d pioneered with Rolex — the Oyster case and the auto-wind movement. His decision to bestow these two unique elements on the Tudor watches was key to making them live up to his high expectations and promise. They would also benefit from being granted the full Rolex guarantee — something that still stands today. 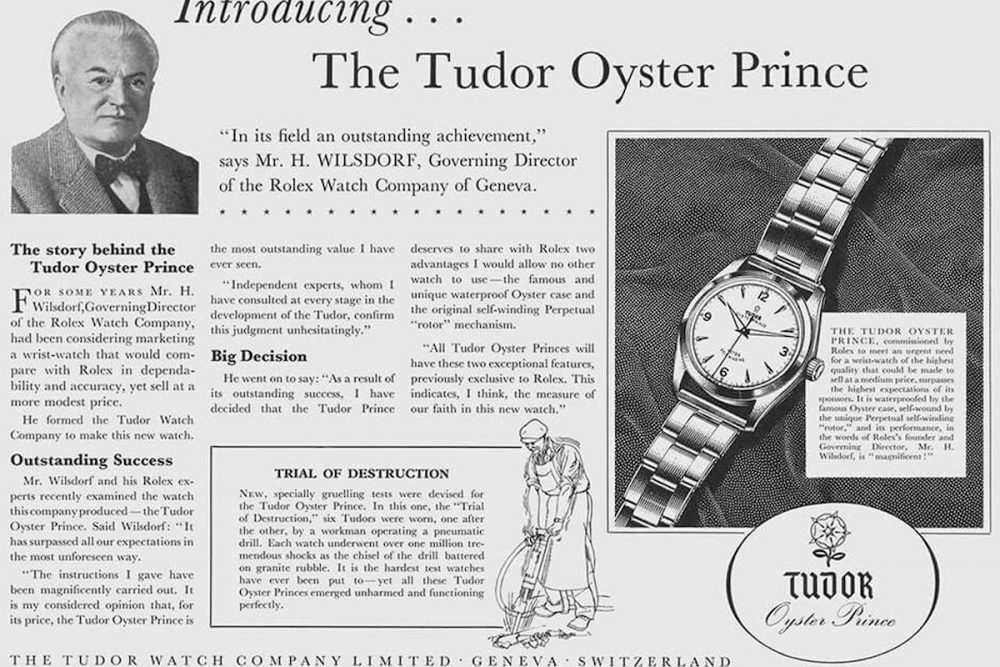 One of the main attractions of a Tudor and Rolex watch for me is the Oyster case. In my opinion, it is iconic and one of the most beautiful and aesthetically-pleasing designs of the 20th century. The balanced design of the case is the perfect combination of form and function. It has been interpreted in many different ways from its purest form in the early watches through the Submariners and chronographs of the 1970s and 1980s into the Heritage Black Bays of recent years. But the real essence of the Oyster is back at the origins of the brand in the 1950s. They weren’t glamorous watches at the time and were, indeed, marketed as utilitarian timepieces with adverts showing them being worn by construction workers. They were watches for everyman; the blue-collar Oyster.

So, what exactly is an Oyster? The name is inspired by the shellfish that lives its life underwater and Wilsdorf designed a system that would hermetically seal the movement inside the case. This was achieved by two main principles — screws and seals. He developed a winding and setting crown that screwed down against the side of the case, making the traditionally vulnerable stem hole impervious to moisture. The same principle was applied to the caseback, which screwed down to the mid-case and was additionally sealed with a rubber gasket. The crystal was sealed too — in the early years via a pressure-fit system and later via a crystal-retaining ring. It was these systems that have continued to make modern Rolex and Tudor watches waterproof to this today. 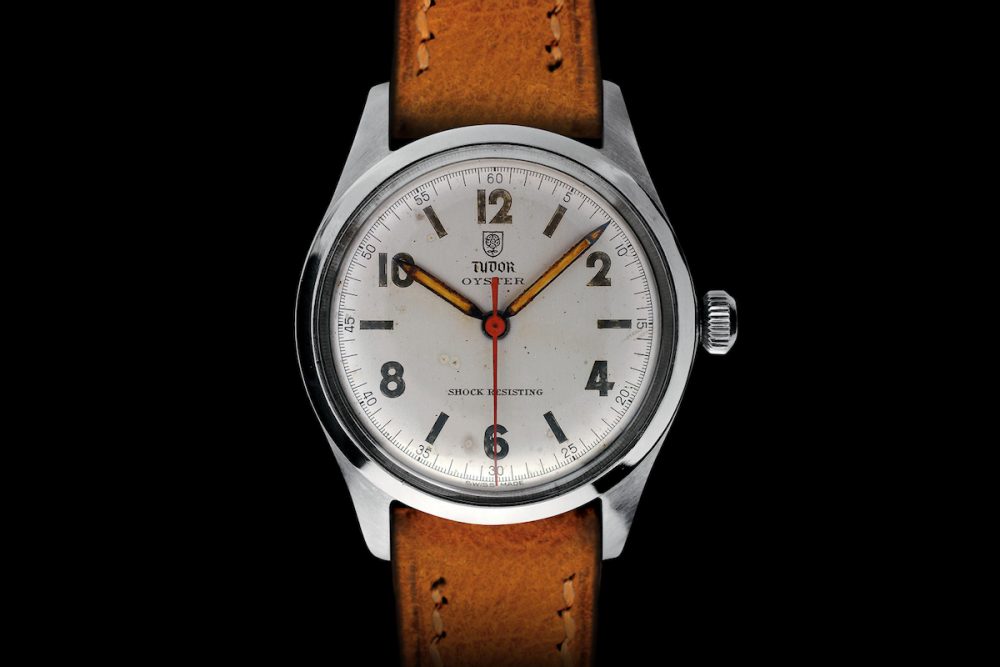 The Tudor Oyster case is iconic and one of the most beautiful and aesthetically-pleasing designs of the 20th century.

The early Oysters were two-piece case designs, known by Italian collectors as monoblocco construction. These watches had cases with the mid-case and “bezel” manufactured out of one piece of steel. The caseback screwed against the mid-case to seal the watch and the crystal was fitted from inside the case using a pressure-fit seal. This made changing the crystals more time consuming as the whole watch needed to be disassembled to fit a new glass. Model references such as the 7809 were monoblocco and were, in fact, the watches used for the Greenland Expedition of 1952-54.

The introduction of the three-piece case made replacing scuffed and cracked crystals a lot easier and it is the system that is still in use today. The screw-down crown and caseback were still key features, but the third element was a bezel that was pressed over the crystal to seal the case. The mid-case of the watch had a small lip onto which the tropic (no date bubble) or Cyclops (with date bubble) crystal would fit. A bezel ring was then pressed down around the circumference of the crystal to seal the watch. This made changing crystals a lot quicker and easier as the movement and caseback remain in place. This upgrade was reflected in model reference numbers with 79XX, models such as the 7904 (manual wind) and 7909 (automatic). 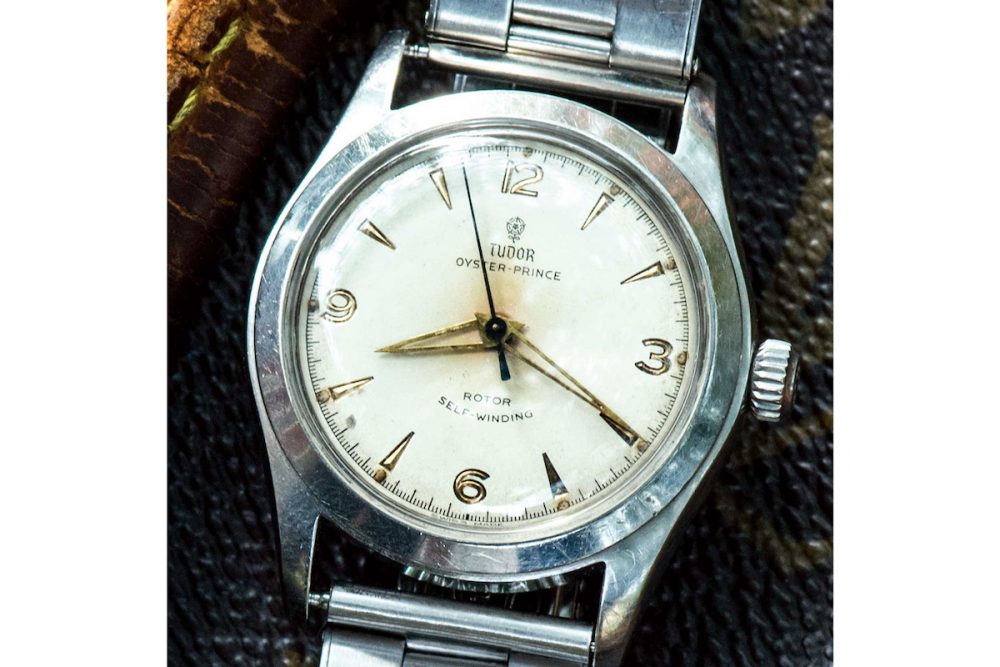 Model references such as the 7809 were monoblocco and were used for the Greenland Expedition of 1952-54.(Photography by Adam Priščák)

For collectors, one of the most interesting aspects of collecting these old Tudors is the dials. There were many different model references, but the sheer number of dial variations is staggering. I still quite regularly come across versions I have not seen before and it is always intriguing to see the detail and quality that was achieved nearly 70 years ago. Of particular note are the textured dials, known by collectors as “waffle” dials. Whether in black or gently patinated ivory, these waffle dials lift a watch to new heights. Or how about a gilt dial with relief-print text in stunning deep black like a pool of oil? Whatever you fancy, there’s a vintage Tudor Oyster for you.

This watch features the most incredible “tropical” gilt dial. The tropical effect is what collectors call a dial that has aged to a brown hue from its original black. This example is almost caramel in tone and looks stunning on its rivet construction Oyster bracelet. 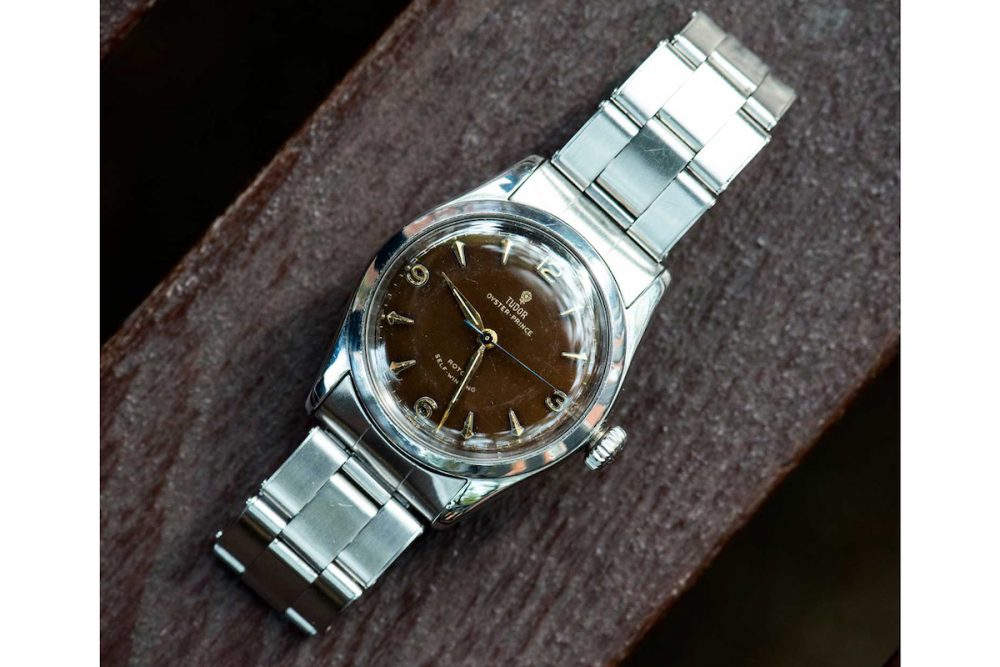 This FEF390-powered automatic Oyster is similar to those used on the Tudor-supported Greenland Expedition from 1952-54. The dial has turned a very attractive ivory colour over the years and features sunken numerals at 12, 3, 6 & 9. 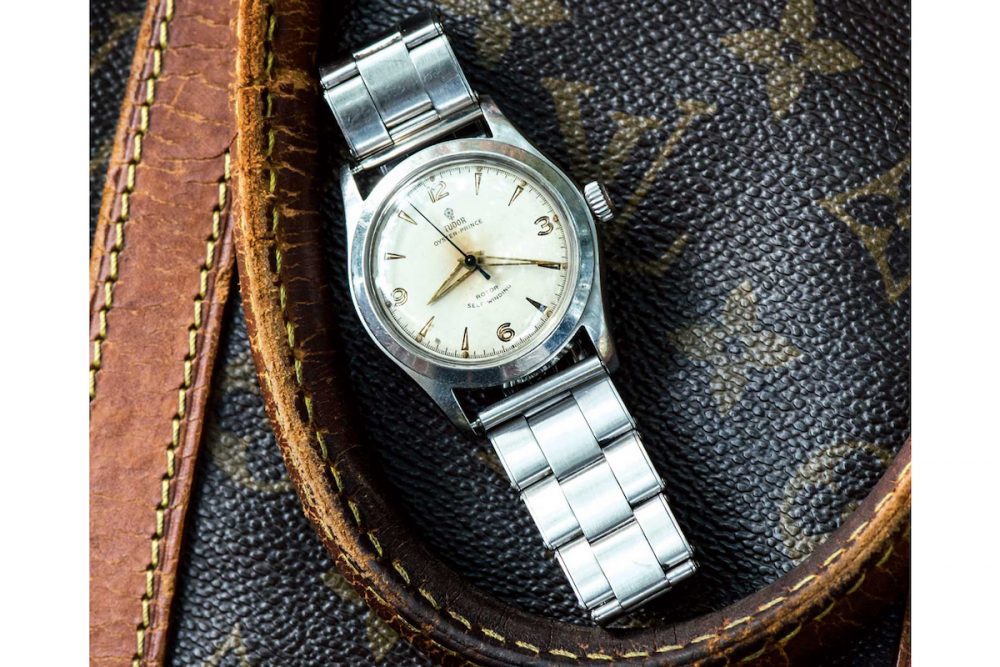 A manual-wind Oyster benefits from a slim, low-profile case due to the lack of oscillating rotor on the movement. The printing quality is incredible on a face of such complex construction considering when they were made. The dial has aged uniformly to a panna cotta shade. 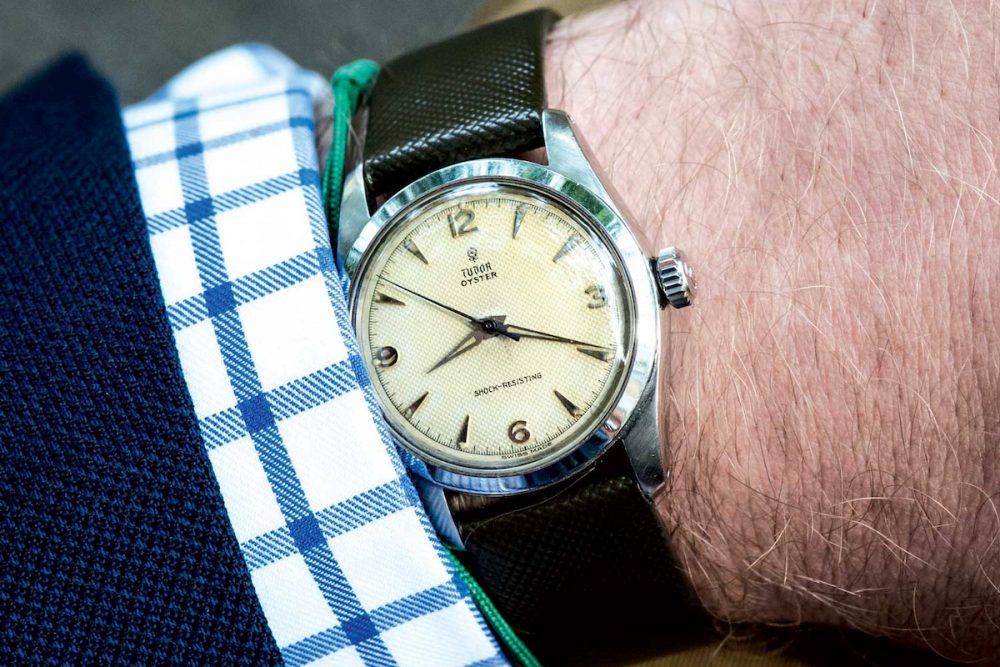 This watch is special, for a couple of reasons. Firstly, the dial is incredible – black waffle with crisp gilt lettering and a gilt-coloured window around the date aperture that displays a roulette date wheel (even numbers red and odd numbers black). That in itself would be enough. The 7919, however, unlike the vast majority of Oysters of this era that were 34mm cases with 19mm lug widths, has a large case size with 20mm lugs – a lot like the “Ovettone '' Rolexes of the era. With Rolex Datejusts featuring dials like this hitting £20,000-30,000, this Tudor is a sure-fire grower. 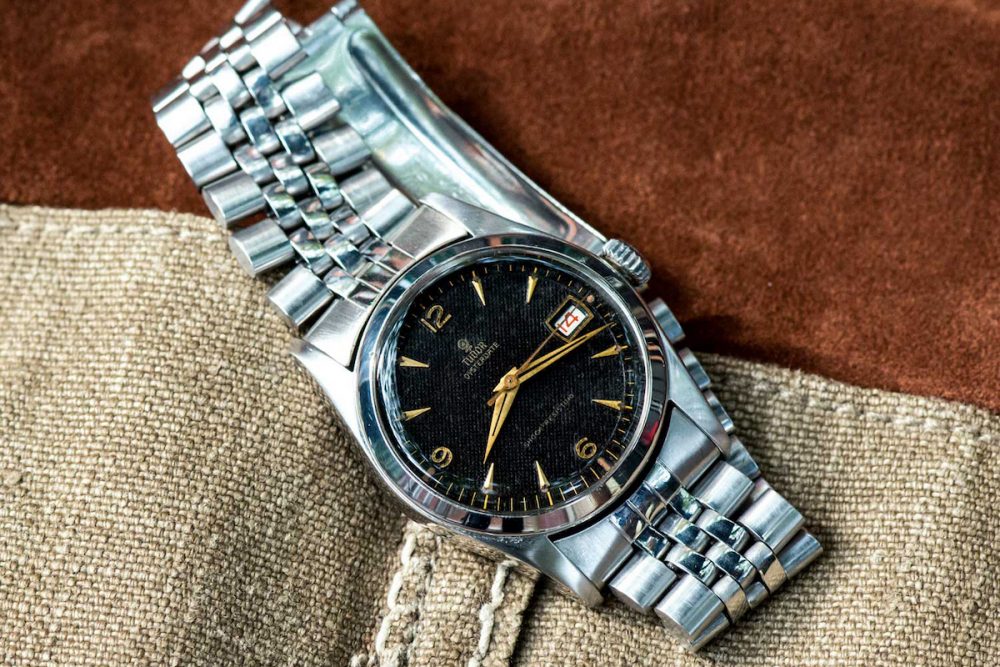 Tudor Oysters at Our Shop

A classic Oyster watch on an Oyster bracelet is arguably one of the most timeless timepieces that you can strap to your wrist. This week, we have added this reference 90990 to our shop. The watch features a silver dial with long applied hour markers with interesting black caps. The 32mm size makes this the perefct unisex watch. The folded link Rolex Oyster bracelet adds to the vintage charm of this watch. 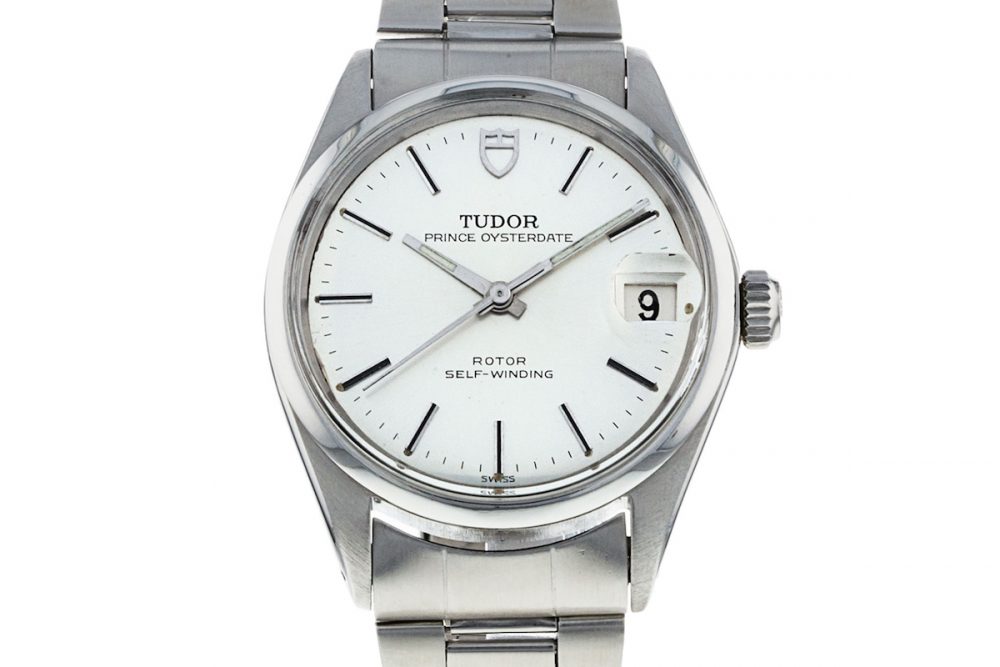 The present example of the Tudor Prince Oysterdate ref. 90900 at our shop is from 1996. 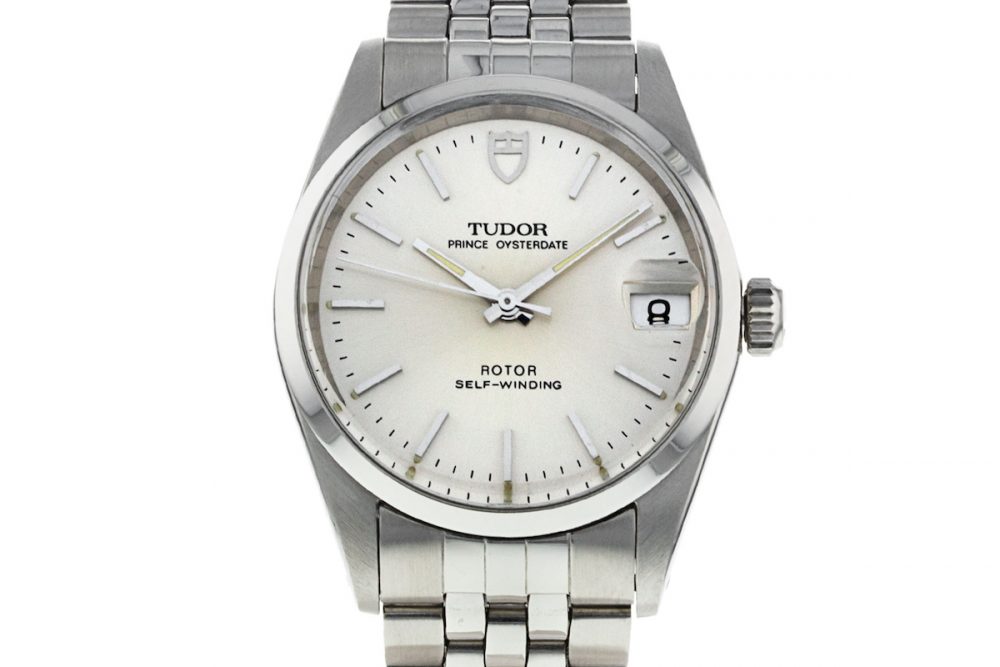 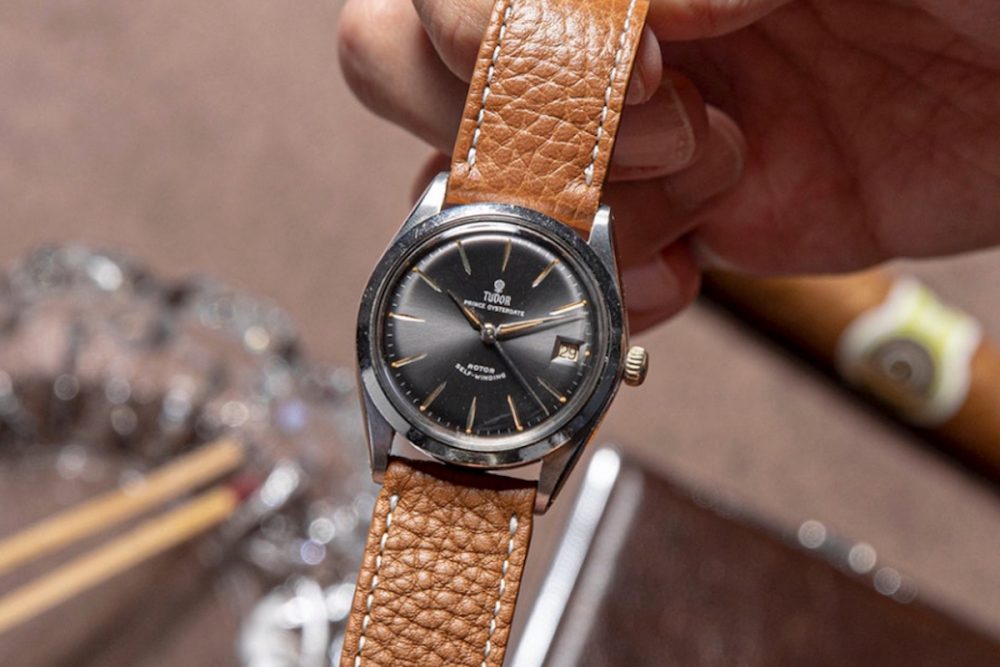 The other Tudor Prince addition to our shop is a classic Oyster watch, featuring an automatic movement and the timeless elegant look that has remained unchanged for decades. The 32mm case is the perfect unisex size and the silver dial with applied baton markers remains in very good condition. The reference 72000 spent many years in the Tudor catalogue and came with a vast array of different dials, which appeals to the collector. Like Pokemon cards...you have to try and get them all! The jubilee bracelet adds a dressier edge to the watch.

If you are looking for a Tudor Prince from the 1960s, we have a gorgeous piece to offer from our selection of vintage timepieces. The dial in this Oyster is in all-original and very good condition. The dial surface is still beautifully clean. The model and serial engravings on the caseback are still very clear and the overall case is still strong.