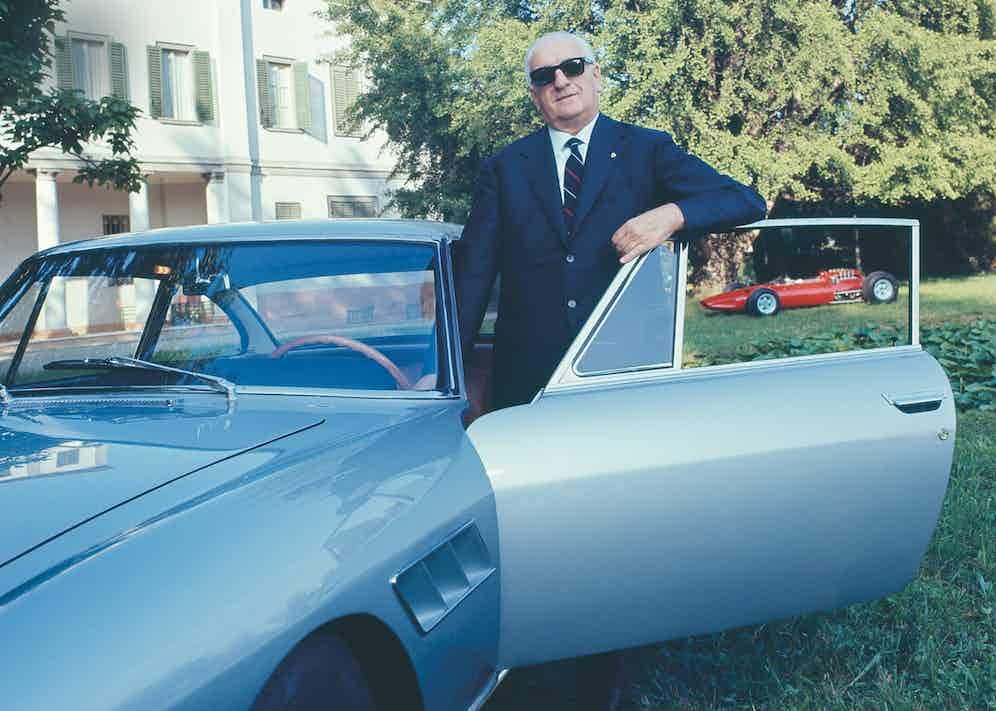 Enzo Ferrari, founder of the Scuderia Ferrari Grand Prix motor racing team, and of the Ferrari car manufacturer, at home in Bergamo. (Photo by Manuel Litran/Corbis via Getty Images)

Should you visit the Museo Enzo Ferrari in Modena, you’ll find as many examples of the sporty dream machines the legendary car magnate lavished on the world as you could wish for, from 1948 Touring Superleggeras and GT 2+2s from 1968 to the 2002 model that bears his name, fittingly resplendent in scarlet livery and complete with DeLorean-style batwing doors. There’s even a unique Ferrari Hydroplane, the Arno XI, from 1954. The exhibits are spotlit like rarefied jewels, and it’s not hard to see why the name Ferrari has transcended the world of AutoBuzz fanboys and Mille Miglia grand tourers and come to stand for something recherché and revered, whether it’s being dropped by French literary luminaries (Whisky, gambling and Ferraris are better than housework: Françoise Sagan) or U.S. rap eminences (Droptop ’Rari, scratch that off my bucket list: Gucci Mane).

However, amid the racers and engines and technical drawings, one of the Museo’s most telling exhibits is rather more modest: a pair of black Persol #2762 sunglasses in a Perspex case. These, along with an immaculate trenchcoat, became Enzo Ferrari’s style staples as he built his world-beating brand. The official story has it that he donned them in 1956 after the death of his beloved son Dino, aged 24, of muscular dystrophy, and was never seen without them again, but the enigmatic look they conferred was a good fit for a man who, in contrast to the brio of his products, maintained a Sphinx-like air, shunning the spotlight, gaining a reputation for being cold and calculating, nursing obscure grievances — “He told me to go soak my head, and never spoke to me again,” said Ferruccio Lamborghini, after the future designer had the temerity to point out some perceived mechanical faults with his personal Ferrari — and mixing gnomic utterances (“I am an agitator of men”) with stark aperçus (“I have, in fact, no interest in life outside racing cars”). Enzo’s reticence only fuelled an intense fascination with him in his native land: “In Italy, there was the Pope and then there was Enzo,” says Luca Dal Monte, author of the biography Enzo Ferrari: Power, Politics and the Making of an Automotive Empire. “By the mid seventies, he had reached a demigod dimension. He was the Grand Old Man, not just of motor racing, but of the country.”

For Dal Monte, Enzo Ferrari possessed all the traits, both positive and negative, that are necessary for the fostering of genius: an Olympian stubbornness; a laser-like focus and drive; and the ability to bend others to his will. He’s been compared to Steve Jobs, Napoleon Bonaparte and Machiavelli, but Dal Monte prefers a folksier comparison. “In many ways he was like Ronald Reagan, a man with no particular specific qualities who made it big,” he says. “There’s a book on Reagan whose subtitle reads, ‘How an ordinary man became an extraordinary leader’. In my opinion, that applies to Enzo Ferrari as well: ‘How an ordinary man became an automotive giant’.” 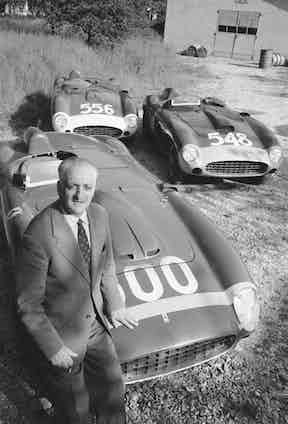 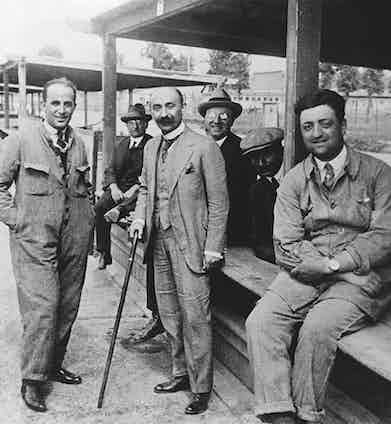 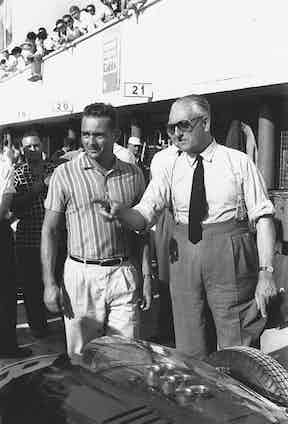 Enzo was born in February 1898, the second son of Adalgisa and Alfredo, in Modena, a province that, owing to morbid fears of everything from flying to elevators, he barely strayed from throughout his nine decades (in an impressive coup de théâtre, the Museo Enzo Ferrari houses his modest childhood home within its swooping glass-and-steel precincts). His father ran a small foundry business that supplied the Italian national railway, and the young Enzo was raised in an atmosphere of clanging industriousness as well as pervasive tragedy: by 1916, his father and his brother, Dino, had both died in an influenza epidemic that raged as they served in the Italian air force.

After watching some rickety racers scrambling round the track in 1908 at the Circuit of Bologna, Enzo ditched his early notions of becoming either an opera singer or sports journalist — not to mention any thoughts of higher education — to concentrate his energies on racing. He became a driver with Alfa Romeo in the twenties: a photo from this pre-Persol era shows him at the wheel, leonine quiff erupting from a high forehead, a slightly predatory grin belying the sleepy cast of his wide-set eyes. He soon found that, though talented, he preferred running the team — a serious force in the rapidly evolving motorsport scene — to driving for it, and, in 1929, he led the first iteration of Alfa Romeo’s racing division, Scuderia Ferrari.

The modern perception of Ferrari as the world’s most powerful luxury brand came not only from Enzo’s passion for winning races — “Second is the first of the losers,” he once intoned — but also from his early understanding of the power of image. Ferrari was inaugurated in March 1947 — after an unhappy interregnum when Enzo’s nascent company was railroaded into munitions manufacture for Mussolini — with the Cavallino Rampante logo, a prancing horse (regal, heraldic) on a bright yellow background, the colour of Enzo’s beloved Modena. The steed had originally been emblazoned on the planes of Francesco Baracca, one of Italy’s most successful world war I fighter pilots (and a member of the same squadron as Enzo’s brother); when he was killed in 1918, his mother suggested that Enzo use it on his team’s cars “for good luck”. 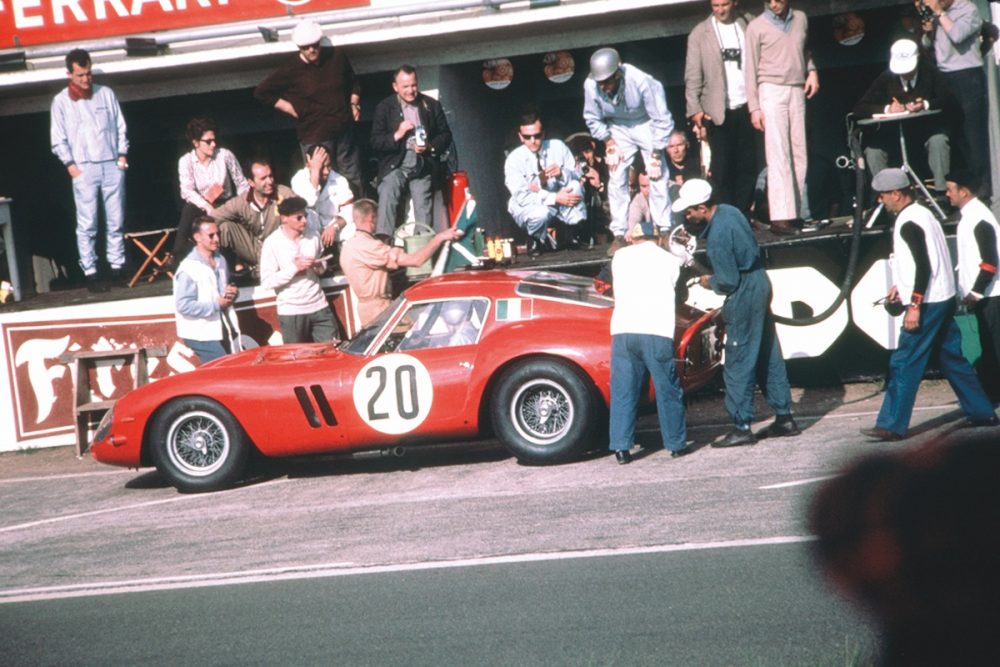 1963 Carlo Maria Abate in a Ferrari 250GTO in the Pits at Le Mans. (Photo by: GP Library/UIG via Getty Images)

“The horse’s attributes — muscular, intelligent, fast — are representative of the excitement that Enzo Ferrari hoped to stir among his customers and fans,” says Gemma Curtin, co-curator of the exhibition Ferrari: Under the Skin, which toured design museums last year. “It’s not just about racing. There’s a certain Italian style, which is about attention to detail and a certain flamboyance, a confidence. There’s an equal emphasis on the engineering and the aesthetic beauty at play — one isn’t more important than the other. I think that’s something that is particularly Italian.”

Enzo was also canny with his timing: Ferrari is almost the same age as the modern Formula 1 championship (which kicked off in 1950), and his upstart company rapidly became synonymous with its globetrotting glamour. He also realised that manufacturing road cars was an expedient way of financing his increasingly costly racing activities, though this pragmatism was balanced by the fact that the company’s ‘runabouts’ were some of the most extravagant in automotive history. Enzo’s blunt, can-do attitude — “If you like this car, we’ll make it; if you don’t, we won’t” was a typical line of sales patter — only increased Ferrari’s allure, and after the opening of a U.S. dealership in Manhattan in 1954, the Cavallino Rampante became an essential accessory for Alpha males in Hollywood and beyond, from James Coburn and Steve McQueen to Clint Eastwood and Sammy Davis Jr. In Europe, meanwhile, the brand became inextricably linked with post-war Riviera chic: film director Roberto Rossellini commissioned Coupe Speciales for himself and his wife, Ingrid Bergman, while Roger Vadim took his leading ladies, including Brigitte Bardot and Jane Fonda, for successive spins in his 250 California Spider. The new playboy elite, including Porfirio Rubirosa, Gunter Sachs and Gianni Agnelli, were all committed fans, the latter so much so, in fact, that he would buy Ferrari in 1969.

For Enzo, however, everything was subordinated to the racetrack, and winning thereon. He described it as a “great mania to which one must sacrifice everything without hesitation” as well as the source of his “terrible joys”, which affected him so profoundly that they became the title of his memoir. Some of his drivers made the ultimate sacrifice: Peter Collins, Count Wolfgang von Trips and Lorenzo Bandini were among those who died while racing Ferraris. The Marquis Alfonso de Portago lost control of his Ferrari 335S during the 1957 Mille Miglia when a tyre blew, killing himself, his co-driver and nine spectators, and leading the Vatican’s official newspaper, L’Osservatore Romano, to denounce Enzo as a latter-day Saturn, devouring his “children” while keeping his eyes firmly glued to the prize. There were also dark hints that he played his drivers, engineers and lieutenants off against one another, which comments like “I give my collaborators three things: a sense of optimism, a creative environment, and the ultimate motivator — competition” did nothing to dispel. 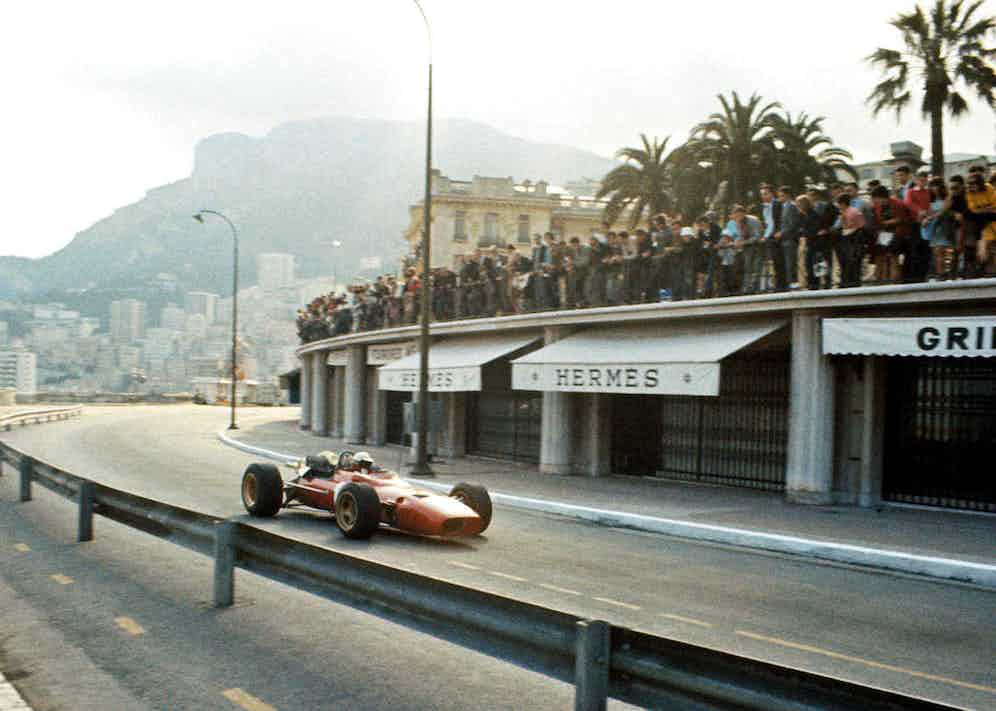 Competition was also writ large in Enzo’s personal life. He had married young, to Laura Garello, in 1923, whose lifelong struggles with depression may or may not have been exacerbated by the early death of Dino, or comments of her husband’s such as, “When a man tells a woman he loves her, he only means that he desires her; the only total love in this world is that of a father for his son”, or, indeed, by the fact that Enzo maintained another family with his mistress, Lina Lardi, and their son, Piero, born in 1945 but allowed to take his father’s name only after Laura’s death in 1978 (Piero Lardi Ferrari owns 10 per cent of the company, and became a billionaire when it was publicly quoted in 2015). In Enzo’s shaded eyes, Piero was forever doomed to remain in the shadow of the long-dead Dino, who’d initially been groomed to succeed his father; even though he was forced to withdraw from technical school after two years due to his encroaching illness, Dino was invariably referred to by Enzo as “my engineer son,” and purportedly had a hand in several key Ferrari designs, including the 750 Monza and several racing V6s. Enzo paid tribute to him in the best way he knew how; by naming a series of his most covetable cars, including the 206 and the 246 with their graceful, swooping curves, in Dino’s honour.

In his final years, Enzo played up to his diminutives of ‘Il Commendatore’ and ‘Il Grande Vecchio’, both in appearance — white hair swept back, inscrutable behind the Persols — and in attitude. “He was a very egocentric man, absolutely focused on his cars, on his ideas, being successful in a brutal way,” the former Ferrari Formula 1 champion Niki Lauda (who narrowly escaped death in one of Enzo’s racers himself ) told GQ. “But in terms of charisma and personality, none of today’s Formula 1 managers can compete with him.”

Enzo died in his bed on a Sunday morning in August 1988, aged 90. He was buried within an hour, in accordance with his wishes to avoid pomp and ceremony and to deter the thousands sure to have descended on Modena to pay tribute to a man who had married pedal-to-the-metal power and visionary design to create something fast and furious and ineffable. He might look askance at today’s official Ferrari travel mugs and backpacks, and at the proposed biopic of his life starring Hugh Jackman, but he’d surely appreciate his posthumous 12-cylinder namesake, and he’d have some sharp suggestions for remedying Ferrari’s decade-long drought in the world drivers’ championship. “While he was alive, he was Ferrari,” says Enzo’s biographer, Dal Monte. “He once said that he didn’t sell cars, he sold engines. I think he was being modest on both counts. What he actually sold was dreams.”

This article originally appeared in Issue 61 of The Rake.