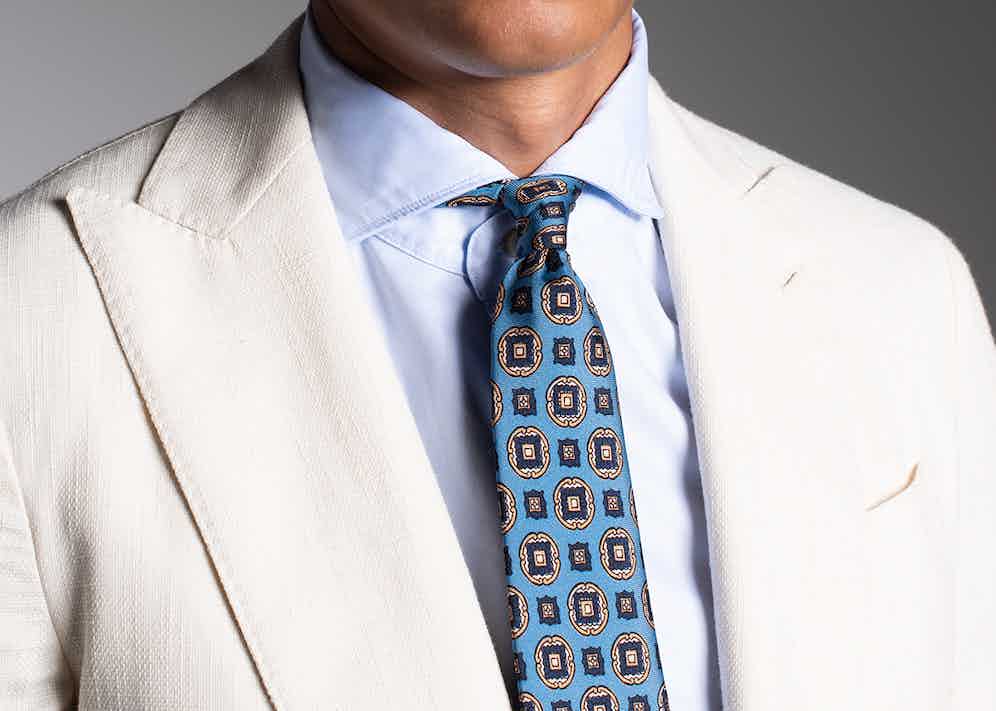 As Cosmopolitan magazine has been telling us for years, length isn’t the most important thing — instead, it’s width that is crucial. This is certainly the case with ties, where a blade hovering around the three-inch (or 8-8.5cm) mark is scientifically proven to be the ‘Goldilocks’ girth for most gentlemen — not too skinny, not too broad, juuuuuuuust right.

Hermès is a house that prides itself on producing trend-resistant, perennial goods. Ties are one of the maison’s signature products, with the lion’s share of the range measuring 3.15 inches at the broadest point, a figure that has hardly changed since the 1980s. Veronique Nichanian, the creative director who’s presided over Hermès’ menswear for several decades, recently remarked, “I like the idea of keeping something for a long time… We used to say at Hermes, ‘We put time into doing things and time gives it back to you.’ And I love this idea.”

Hedi Slimane made slim lapels and skinny ties de rigeur during his early-’00s reign at Dior Homme. Mad Men subsequently kept the trend alive, helped by Hedi during his later tenures at Saint Laurent and Celine. To this day, two-inch ties remain the default setting at numerous fashion houses. But as Tom Ford put it, “There is something a bit meager and uptight about a skinny tie and jacket... I think that accentuating the natural V of a man’s body makes men look more masculine, less boyish, and in general more powerful.”

Ford may be known for the pumped-up volume of his runway tailoring and the garments he himself wears, but the suits that sell best at his boutiques more closely follow Cary Grant’s dictates for classic style: “the lapels are neither too wide nor too narrow, the trousers neither too tight nor too loose, the coats neither too short nor too long.” And in keeping with these balanced proportions, the ties that fly off the shelf at TF mostly measure a magic 8cm.

The creative director of leading British menswear brand and tie specialist, Drake’s, Michael Hill concurs with Grant’s middle-ground approach and describes the 8-8.5cm tie thus: “It’s our bread and butter. It’s part of what we stand for, really — we love something that has some personality, that’s beautifully made, but isn’t sitting at one extreme or the other. Going to extremes, that’s where you can stray too far out of the realm of what is classic. You want something that fits seamlessly into your wardrobe, that’s going to work with most of your jackets and suits over a period of time. The three-inch tie is perfect.”

Hill says it’s not a case of ‘one size fits all’. “Of course, if you’re a larger or a slimmer fellow you might want something broader or narrower. We’ve got plenty of bespoke customers like that, for whom we might cut a wider or a narrower tie. Even in that case, you’re still being proportional, sticking with what makes sense proportionally.” Nonetheless, Hill says, “8 to 8.5cm is a scale that works for most guys.”

There’s a sense of balance with midsize lapels, which also generally measure in the vicinity of three inches at their broadest point. “This size of tie sits with the width of the standard lapel and it complements the general sensibility of our aesthetic and what we stand for,” Hill says. “Our ties have been in that area, around 8cm, for quite a while, which shows how this width has stood the test of time.”

For long-lasting pleasure, three inches is all you need.