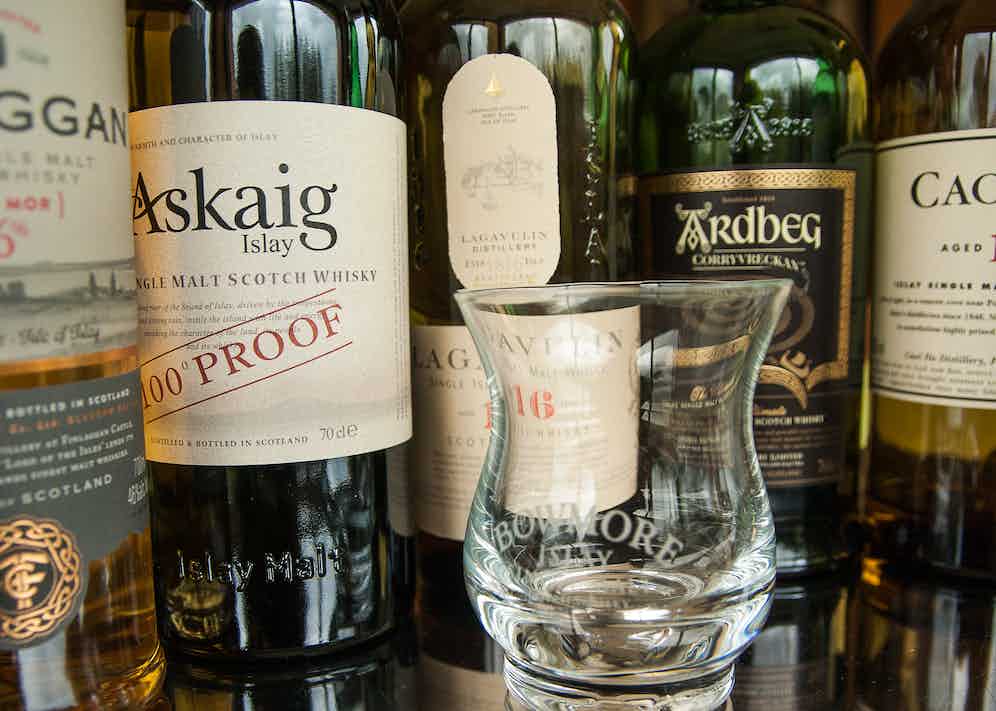 Over the course of a two-decade career championing Scotland’s most famous export (aside, perhaps, for a schertain double-oh-scheven), Ewan claims to have sampled whisky from every distillery operating in the country today — as well as many that are now defunct. During a stopover in Singapore for a masterclass at DFS’s Masters of Wines and Spirits event, we tested the Scotsman’s innate canniness by asking which whiskies he feels present the best value in three price ranges: under £50, £100 and £500.

With this budget, I’d always safely recommend Johnnie Walker Black Label, because for me it’s kind of Scotland in a glass. It’s got all four corners of Scotland brought together in perfect harmony. So if you like the lighter Lowland notes, if you like some of the richness from the highlands and Speyside, a bit of smoke from Islay, it’s got all of that going on. There’s something in there for everyone. To be honest, it’s my go-to drink if I’m going to have a whisky and soda in the evening, that’s the one I usually opt for. If you want to go down the single malt route, I would usually veer towards a Talisker 10-year-old, which has got that lovely coastal, salty air, plus a little bit of smoke. But if you’re in the mood for going a bit bigger and bolder, then a Lagavulin 16-year-old is an excellent choice. They all sit in that price band and you can’t go wrong with any of those.

In this price range, the whisky I’d steer someone towards would be Talisker 18-year-old. It retails for less than £90 and is very hard to beat at that price. It was voted ‘Best Single Malt Whisky in the World’ at the World Whiskies Awards in 2007, and in my opinion, it is still one of the best. Aged for 18 years in casks that previously held bourbon and sherry, that’s an incredible whisky at a very approachable price point.

Certainly in that territory, if you’re looking towards the investment angle, then I’d steer you towards the John Walker & Sons Private Collection, which retail around £400 to £500 a bottle. It’s a one-off series, they’re all limited editions, with just a few thousand bottles for the whole world. And while they’re a great investment, you might well be tempted to open and drink them because each one has as a focus on a specific style or flavour. Some of them we’ve amplified the smokiness, some of them we’ve really focused on the maturity and the wood impact, some of them we’ve looked at more the Speyside fruity style, so each one of them is wonderful, but each one focuses and amplifies certain flavours. They’re all great whiskies to drink, absolutely, but given the limited nature and the fact they’re one-offs, then there is definitely investment potential as well. If you’re looking at just a great whisky to buy in that price point and enjoy, consider the Johnnie Walker Blue Label ‘Ghost & Rare’ Port Ellen edition, which is about £275. At its heart, this has very rare whisky from Port Ellen, a legendary distillery in Islay that closed in the early 1980s. That gives it a beautiful, really well-structured smokiness right at its core. We’ve used some whiskies from other incredibly distilleries to make this blend — there are single grains from Caledonian and Carsebridge; it’s got whiskies from Mortlach and Dailuaine, which are both rich and full-bodied; and it’s got some Cragganmore, the most complex of all the Speyside whiskies, I think. Lots of amazing whiskies have been brought together in that bottle.