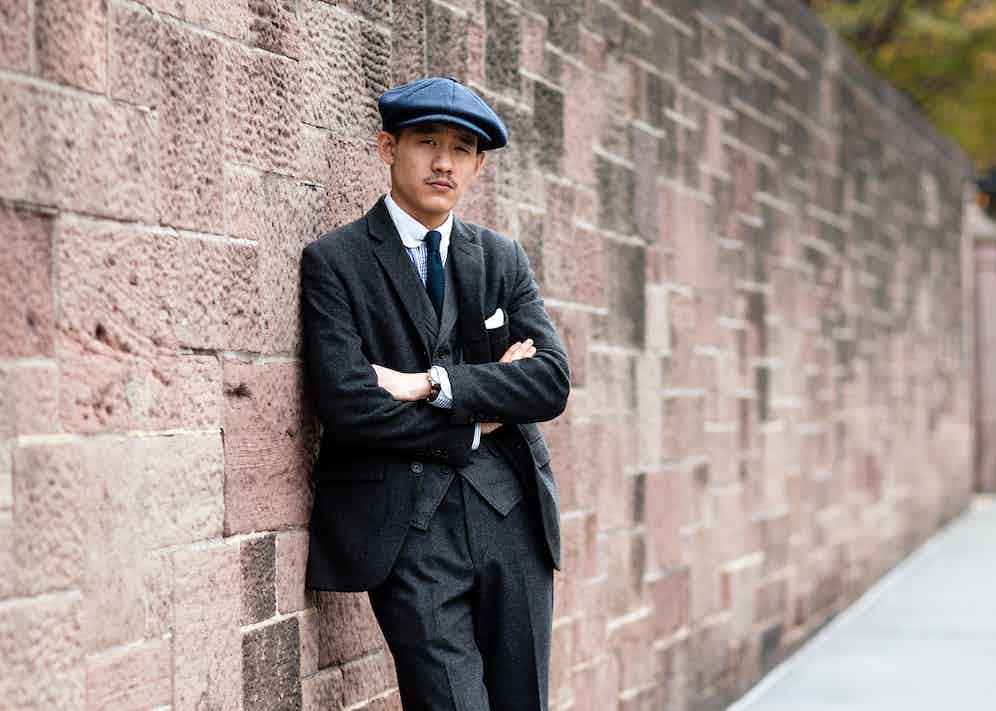 Most of us take a while to find our personal style. Generally, a man’s look will evolve from his adolescence into his twenties — with countless heinous mistakes along the way — and then refine through his thirties, until sometime around 40, he nestles into a comfortable sartorial niche.

Raymond Chu is that rare exception. This guy’s had his look on lock forever. At a glance, his handle’s a throwback to a century or so ago, but without ever appearing anachronistic or costumey… Indiana Jones-era, tweaked for the 21st century. Ray developed his signature aesthetic while still in his teens, lending the classicism a youthful irreverence. “When we first spoke, I was just a kid,” Ray says down the line from New York — the city that doesn’t sleep (and seemingly neither does Ray, as we’re chatting at 3.30am Eastern time). “Now I’m a grown-ass man.”

Sure enough, our initial conversations took place in 2008, when Ray was a youngster and The Rake was in its infancy. At the time, Ray was still a film student at NYU with a part-time gig as a sales assistant at Ralph Lauren’s Rhinelander Mansion flagship, but he had begun achieving broader renown via the nascent artform of street style photography. (In fact, that’s how he crossed our radar, and was invited to write for several early editions of this magazine.)

In the mid-aughts, an upstart snapper named Scott Schuman had established a blog he dubbed The Sartorialist, dedicated to documenting the tailored attire of elegant gentlemen in Italy, the US, Britain and beyond. Ray soon caught Schuman’s eye and became a frequent Sart subject, along with Lino, Gianpaolo, Wooster, Luca, Yukio, Simone, as well as various people smoking and bicycling (though not necessarily at the same time).

The first Sartorialist portrait of a baby-faced Ray featured a thrifted pinstripe suit coupled with a Fair Isle sweater, felt fedora, repp tie, pin-collar shirt and a camel coat cast casually over the elbow. An image captured on Governor’s Island a couple of years later, in 2009, depicted Ray perched on the running board of a vintage car, sporting a cream linen suit, boater hat, contrast-collar shirt and duotone co-respondent monkstraps. As many a commenter pointed out, he looked like he might’ve time-travelled from 1930s Shanghai.

Both the look and constituent garments he picked up around that time have served Ray well. A decade has passed, but Ray says he’s hardly shopped since those days. “All those things I got from Ralph Lauren carried me through eight or ten years. Now all my Oxford shirts from that period are pretty much worn to death. And I’ve worn through all of my chinos from that era. But that’s allowing me to replace things and fix stuff I wasn’t totally happy with — like maybe the rises on those pants were too low, or the armholes were too big. Or that three-button jacket, maybe I wasn't completely happy with the silhouette.”

He may have his minor quibbles with particular, persnickety details but on the whole, Ray has nothing but praise for his former employer. “Ralph Lauren, he’s the best! I've got a glenplaid sports coat I’m still wearing, a grey flannel suit… The suits were fantastic. They were great, great investments at the time.” Especially so with a steep staff discount, he points out.

Ray’s many vintage finds proved equally savvy buys. “Modern ‘fast fashion’ clothing just fades and disintegrates, it’s terrible. And it’s mostly synthetics, which is really bad for the environment, getting into the ecosystem, harming life in the waterways. I keep trying to tell people who typically shop at the Forever 21s or whatever of the world to take a look at vintage instead.” In Ray’s opinion, “Vintage is the best kind of recycling or upcycling that you can do, from an environmental perspective. There’s literally tons of clothes that have been made throughout history that are still perfectly wearable and you can find some incredible garments out there, as I certainly have. Very affordably, too.”

Overconsumption, the endless quest for more and more stuff — not least, cheap, disposable clothing that’s worn a few times and then thrown away — is rooted in human boredom, Ray reckons. “I have a theory, I think most decisions that humans make are driven by the search for love, or simply by boredom.” He believes that novelty can still be found in old, cool things, like vintage clothes, which are so easily given a second lease of life. Garments, he says, “They’re kinda like the toys in Toy Story — they need to be played with and given a purpose. They have a deep need to be played with and made use of.”

With all this talk of reanimating and remixing relics, you could be forgiven for thinking Ray is living in the past. That’s not at all the case. In fact, in addition to his work as a filmmaker, Ray is currently in the early stages of developing his own line of clothing. He’s keeping the specifics under wraps for the moment but does reveal that he is researching ‘green-tech’ fabrics and innovative wools, with the goal of making high-end garments that combine smart styling with performance and ease of wear.

“Think back to when we first spoke, we were still coming out of that really boxy look from the 1990s. Today, generally, everyone’s so much better dressed than they were 10 or 15 years ago,” Ray correctly notes. The #menswear epoch taught us to re-examine how clothing should fit, while the current athleisure trend has served as a reminder that comfort is key, too. Now’s the time for a new hybrid, blending the technical and the traditional, says Ray. “I think that’s dope, you know?”