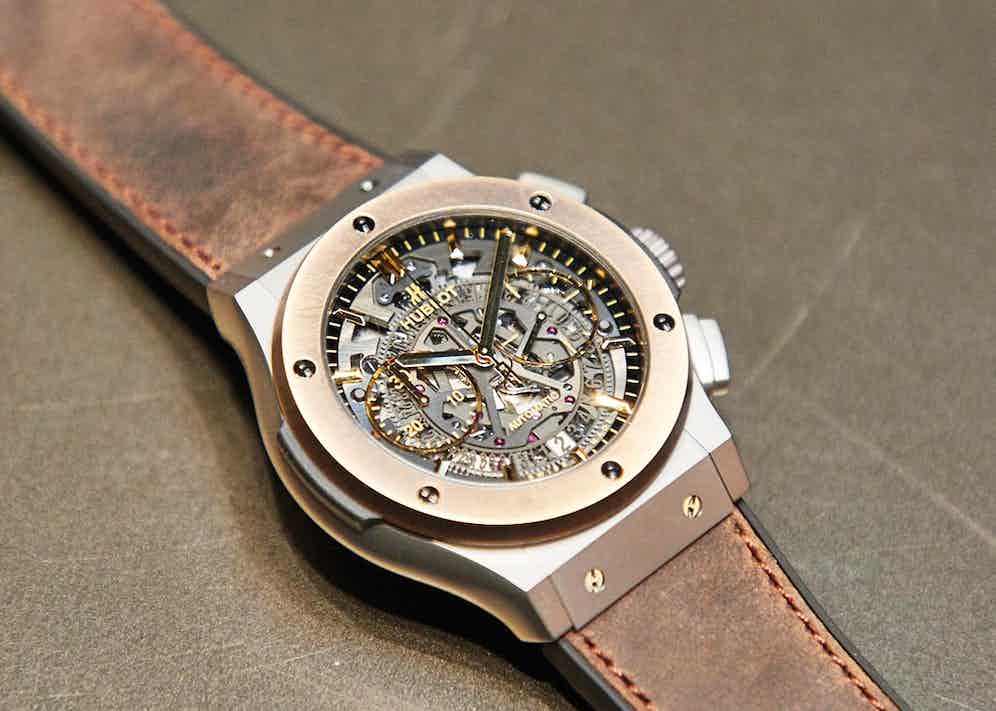 It started on a clear, unseasonably warm and hospitable evening in Milan in February last year. Little did I know I was about to embark on a horological journey that would last the better part of a year and a half. But the end result, I think, is worth the peripatetic, highly international, and at times amusingly circuitous journey that has yielded one of my favourite timepiece collaborations for The Rake.

The gentlemen who gathered together in the historic stone courtyard of Il Salumaio di Montenapoleone were familiar figures to readers of this magazine: Lapo Elkann, the grandson of Gianni Agnelli; Luca Rubinacci, scion of Naples’ most fabled tailoring dynasty; Augusto Capitanucci, the Hublot Mediterranean Regional Director; and, with apologies, yours truly. The occasion followed the celebration of Elkann’s Italia Independent and Rubinacci’s collaboration with Hublot, which featured vintage tweed straps and dials unearthed from Luca’s father Mariano Rubinacci’s famous treasure trove of ancient materials. As the conversation of the night turned to philosophy, metaphysics and romance, the question was posited — by which of these gentlemen I can’t recall — that if The Rake were to create a Hublot watch, what would be its characteristics? Inspired in part by the event of the evening, I replied: “It would have to embrace two eras simultaneously — that of the ancient world and that of the modern world. In the same way that tailoring as defined by Rubinacci and watchmaking as expressed by Hublot is simultaneously ancient and modern.”

And so it began with the concept of Alpha and Omega, the first and the last, the newest and the oldest colliding within the fiery crucible and fierce geometry of a single watch. After all, wasn’t this the calling card of Hublot? Isn’t ‘fusion’ — the concept of modernity and tradition, the best of material innovation — intrinsically married with the 200-year-old traditions of high Swiss watchmaking? As we continued our horological dialectic, we arrived at the idea of metals each embodying the past and the future. So the materials selected forThe Rake’s first collaboration with Hublot are, firstly, an expression of contemporary technical advancement, and, secondly, an embodiment of the ancient world. Interestingly, both materials are innately linked to warrior cultures, and their names bristle and resonate with a sense of purpose born of their extensive use in combat. 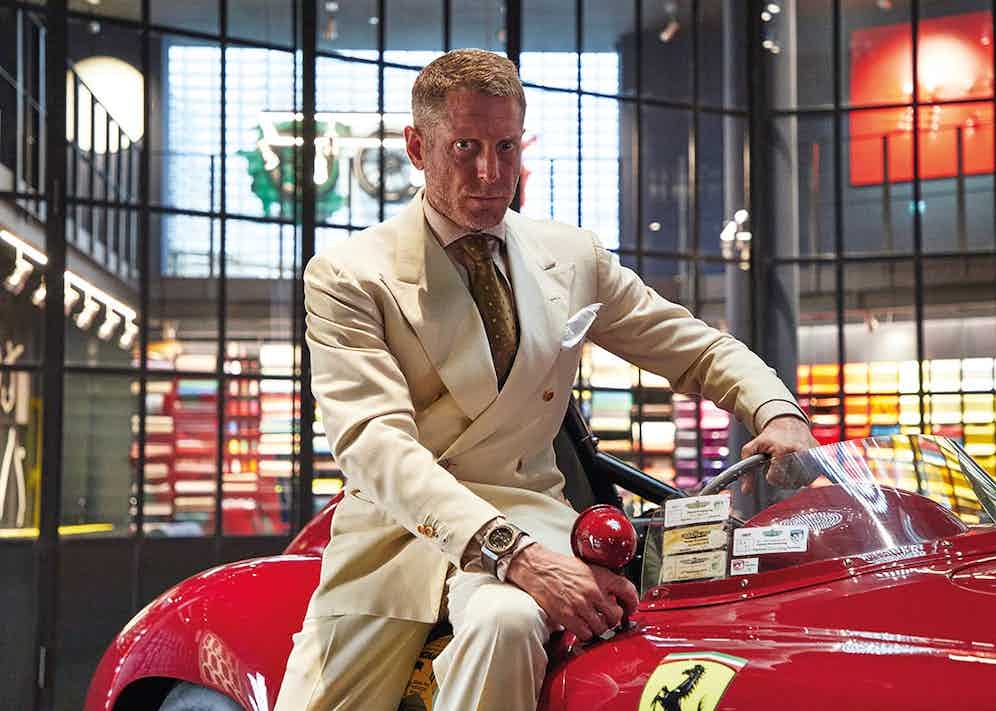 Anyone with a penchant for handmade bicycles is going to be familiar with the name titanium. Even in the age of carbon fibre, titanium is still the material of choice for the most coveted and beautiful frames from the world’s most artisanal builders. It is, simply speaking, the metal that boasts the highest strength to weight ratio. It has a near-infinite fatigue life, meaning that it can absorb shock indefinitely with almost no change to its molecular structure, and is impervious to corrosion. It is hypoallergenic, which makes it the substance of choice for medical implants. And it is self-healing. This extraordinary material was discovered in Britain at the turn of the 19th century and was named for the Titans of Greek mythology.

During the 20th century, titanium’s super-human performance qualities were exploited by the aerospace and military industries. Titanium is so damnably strong and crazily resistant that it was used extensively in the U.S. airforce’s fighter jet ST-71 Blackbird that for more than 30 years held the record as the fastest plane ever created. At its top speed, of 3,500 kilometres an hour, most metals would simply melt and disintegrate because of the heat generated by aerodynamic turbulence. But not titanium! The Blackbird was so fast that standard operational procedure when a surface-to-air missile was fired was simply to outrun it. The Blackbird could be produced only by constructing its skin and structure largely from titanium.

At the height of its renown, between the sixth and fourth centuries B.C., the Spartan army was considered so superior to any other fighting force that one Spartan soldier was considered more valuable than a multitude of men from any other nation. And it was bronze that gave this army its technical advantage, the material used to furnish the armour and weapons of the most legendary warrior culture of all time. Sparta differed from all other nations in that every male citizen was a full-time soldier first and a farmer, poet or ruler second. The prevailing regime was so harsh that babies considered too weak to serve the state in military duty were left to die at Mount Taygetus. Hoplites, as the infantrymen were referred to, began their training in the agoge aged seven. They had to demonstrate unwavering courage, adaptive intellect and full physical prowess for 23 years after that before they could be granted citizenship at the age of 30.

The key to Spartan military might was their phalanx, a wall of overlapping shields held by men standing shoulder to shoulder, each row of men supported by the row behind. The drill to ensure the phalanx never broke down was immortalised in the novel Gates of Fire, by Steven Pressfield, which detailed the saga of the 300 Spartans at Thermopylae. Colloquially referred to as ‘tree fucking’, it involved row after row of men pushing against a massive tree and could last for days. It was so arduous that men would die from exhaustion. A Spartan could lose his helmet or breastplate, but to lose his shield would bring shame or death: armour was used for personal protection, but a warrior’s shield protected the man next to him. Shields, or aspis, were constructed of a wood core with an outer layer of impenetrable bronze marked with a lambda symbol, for ‘laconia’, or ‘Sparta’ in Ancient Greek. The site of these glowing bronze shields, held one over the other across the battlefield, must have been truly terrifying. Bronze was also used for the Spartan helmet, with signature eye slits, his breastplate, and greaves.

“So we’ve got titanium and we’ve got bronze,” said Capitanucci. “But which model should it be? To me it should be a Classic Fusion model.” I was in complete accord. In fact, I already knew which model I wanted to form the geometric blueprint of the watch in question. Introduced in 2013, the Hublot Classic Fusion Aero Chronograph has long been my favourite reference made by the brand. It takes the slimmer, more elegant Classic Fusion case styling and dimensions and adds a level of engaging transparency and arousing visual dynamism, with a sapphire crystal and a highly skeletonised in-house chronograph movement. 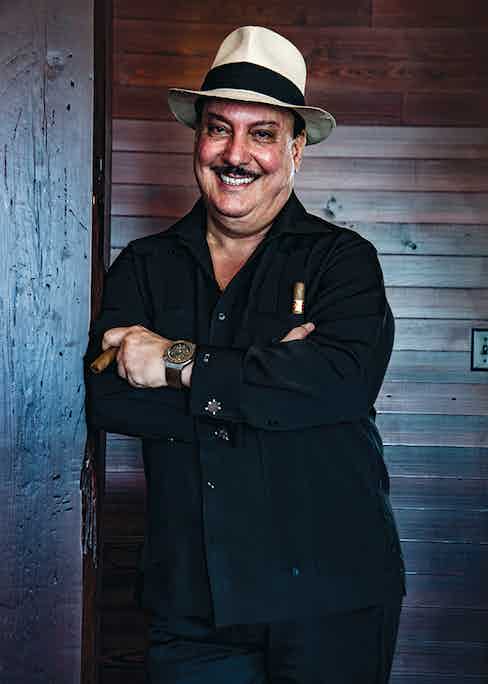 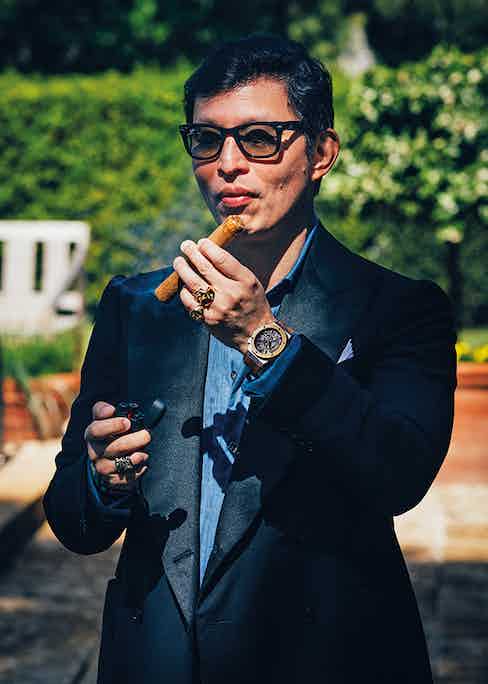 The initial renderings for the watch came back, and I was enamoured of the result. While Hublot has now made several watches using bronze, specifically an engraved bronze watch for their collaboration with the extraordinary cigar maker Arturo Fuentes in a time-and-date-only version, and another limited-edition in Big Bang format in collaboration with Meindl (Bavaria’s most famous producer of Lederhosen), this was, however, an alloy using tin and burnished in a specific way. The combination of the two materials remains unique to The Rake.

Furthermore, I proposed the idea of sandblasting the titanium case to better evoke its pragmatic aerospace and military roots. The resulting tension in a classic styled case, between two metals from opposing time periods both rendered in a refined yet brute finish, created a stirring dynamism. This is enhanced by the strong interplay of the dark grey skeletonised baseplate of the movement, which occupies much of the dial-side real estate through the two layers of transparent sapphire. Applied to the transparent dial are indexes and sub-dial frames and minute markers all rendered in bronze, as well as the sword-shaped hands and the sweeping chronograph hand, also in the bronze theme.

Ricardo Guadalupe, the Chief Executive of Hublot, is one of the most able and dynamic leaders in the Swiss watch industry. And it has long been his perspective that “the strength of Hublot is that we can go anywhere. We can forge a strategic alliance with anyone as long as they share a similar spirit of dynamism that embodies Hublot”. That chameleon-like ability, that capacity to shape-shift and transmogrify, to — in the words of Bruce Lee in the seminal Enter the Dragon — “be like water”, underpins Hublot’s ability to encapsulate and embrace the best and brightest of sports, cinema, music, tattooing, motorsports and so much more that is vibrant and relevant in contemporary culture.

When I met Ricardo, to be given the final blessing for the project, he explained to me: “The Rakeis a great partner for us on the project because the magazine always delves way beyond the superficial: it delves into the microcosmic details of tailoring and craft, but it also examines the philosophy behind la bella figuraand the desire to remake ourselves and the world around us with a certain elegance. I love the idea of uniting an ancient and modern material and I loved the idea of bringing innovation to tradition because these are the fundamental values of Hublot. But you’ve translated these into a watch that has a unique sense of style, a sartorial vision that adds something to our world.” 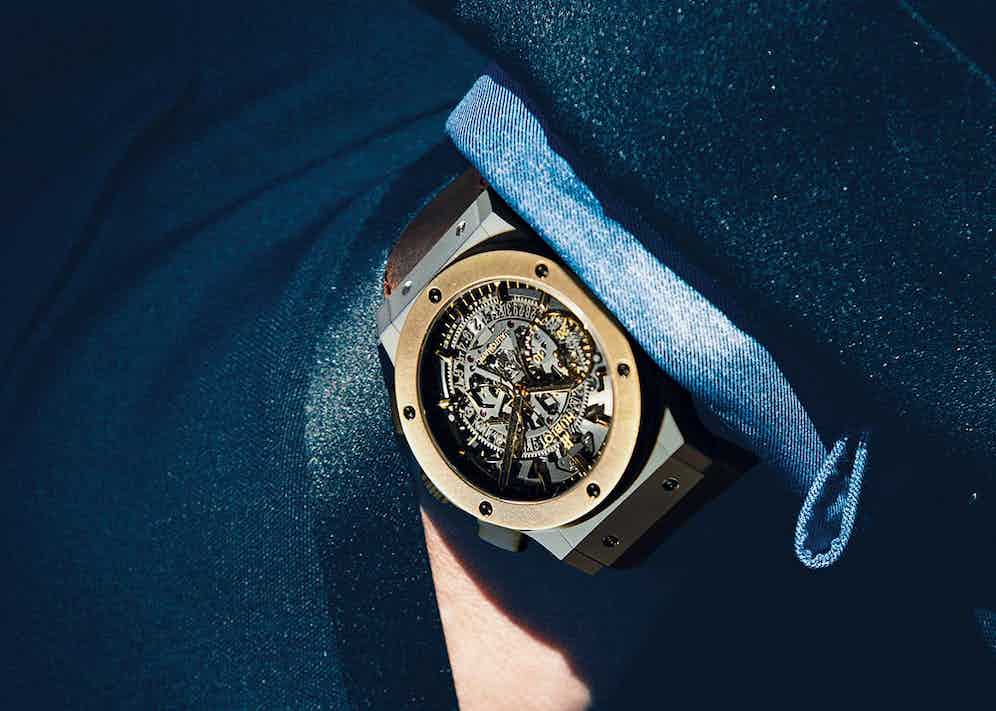 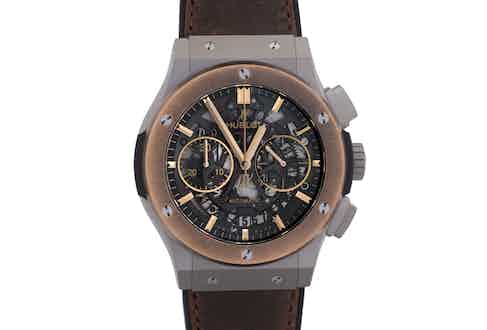 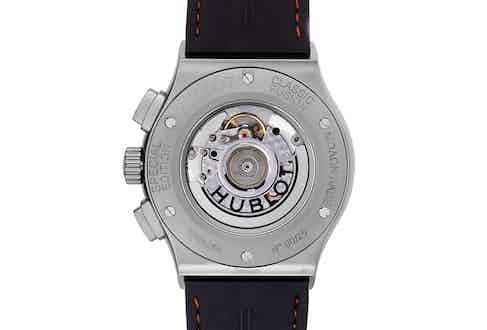 Amusingly, one of the longest processes related to the design of the watch focused on the strap. By this point, it was decided to base the project in The Rake’s hometown of London. So it was that Hublot’s rakish General Manager for the U.K., France, Belux, Ireland, Eastern Europe and Scandinavia Benoît Lecigne, and I spent several hours trying to arrive at the perfect bracelet. We toyed with the idea of shark and then suede. We even tried leathers that would evoke the horsehide used in our favourite motorcycle jackets. But it was finally at Basel in March, at a fortuitous and spontaneous meeting between Ricardo, Benoît, me, and a man I consider to be one of the greatest innovators in his traditional métier, that we arrived at the answer. That man’s name is Carlito Fuentes.

Arturo Fuentes is something of a legend in the cigar world. He left Cuba in 1902, following the Spanish-American war. By 1912 he had founded his eponymous cigar brand with cigars rolled in Florida using Cuban tobacco. He was of the opinion that while Cuba created the best tobacco leaves, the quality of production and the standards of quality control could be improved upon. Following the Cuban embargo, Arturo’s son Carlos, soon to become an icon in his own right, travelled the world sampling leaves from Puerto Rico and Mexico. He finally arrived in Nicaragua and found the tobacco appealing enough to set up his production facility there, only to have it burned to the ground following the revolution. In 1980 Carlos and his son, Carlos Jr., or Carlito, restarted from the ground up in the Dominican Republic, this time with the ambition of creating cigars that would rival the very best from La Habana. It was a feat equivalent to Californian winemakers defeating the French in the first international blind tasting when Arturo Fuentes cigars, in particular the soon to be fabled Opus X, became as coveted as Cohiba or Trinidad cigars for their multilayered palimpsest of flavours. Guadalupe, Lecigne and I looked at the perfect shimmering oily wrappers of our beloved Opus X cigars and remarked that the watch straps should be an homage to Carlito’s near-alchemic ability in blending some of the most famous cigars in Christendom. To our delight, Fuentes agreed to participate in our special project and will be present at the launch of the watch to offer a tasting of his mythical smokes.

So it was that philosophy, warrior culture, sybaritism and passion all formed a heady fusion, which, as in the perfectly blended cigar, yielded what I believe is a result far greater than the sum of its parts. But, of course, I leave that for you to decide.

The Hublot Aerofusion Chronograph Special Edition “The Rake” will launch in September 2018 with a price of £14,900. For more information, email shop@therakemagazine.com. Can you afford not to have one?