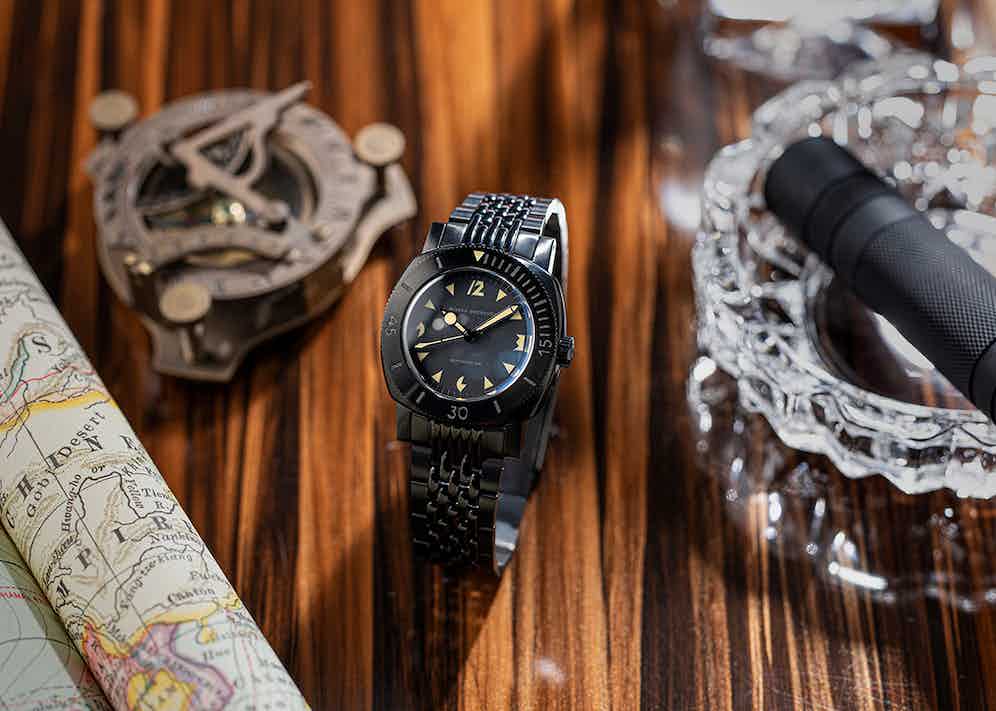 I’m just going to come right out and say it. I love Nivada Grenchen. It represents everything the world needs right now. Great designed watches rooted in a truly cool history and with incredibly ethical and accessible pricing. Nivada Grenchen is one of those brands that has flown decidedly under the radar yet has an incredibly rich, authentic and compelling story. It was created by one Jacob Schneider back in 1926 and soon developed a reputation for handsome, accessibly priced, hard-use, extremely reliable, purpose-built, badass timepieces. In 1930, Nivada found its stride when it decided to focus on the creation of automatic watches. This led to the release of its first waterproof automatic watch, the Antarctic, which was used by the U.S. Navy’s Team Deep Freeze I in their expedition to the South Pole. Famously, Admiral Richard E. Byrd, the commanding officer of Deep Freeze I, characterized the Nivada Antarctic this way, “It was snowed on, rained on, sleeted on. It was never wound. It was dropped, hit and knocked against ice. It lived in zig-zagging temperatures from 100 above to 40 below. And it never lost a second. That’s what we mean when we say this watch was waterproof, self-winding, shock-resistant and antimagnetic.” Nivada built a truly excellent reputation for itself with other models, including an incredible water-resistant sports chronograph named the Chronomaster. Says Guillaume Laidet, one of the co-owners of Nivada Grenchen and the individual behind its revival, “The history of Nivada and its achievements are really something special.

We made the Chronomaster, the first water-resistant chronograph. We made the Antarctic, a watch that accompanied theU.S. Navy to the South Pole; and we made the Depthmaster, the very first diving watch rated to 1,000 meters water resistance [more on this later]. In the context of the mid-20th century, there were few watch brands as innovative and significant as us when it comes to sporting performance.” Indeed, Nivada was so incredibly reactive to the advancement and proliferation of sports like scuba that in 1964, they became the very first brand to integrate a depth gauge into a timepiece called the Depthomatic. But by the 1970s and ’80s, as a result of the Quartz Crisis, the brand, like many other smaller players, was tragically wiped out. Fortunately, Nivada was revived in 2018 by Guillaume Laidet and his partner Remi Chabrat with the ambition of restoring it to its former glory. 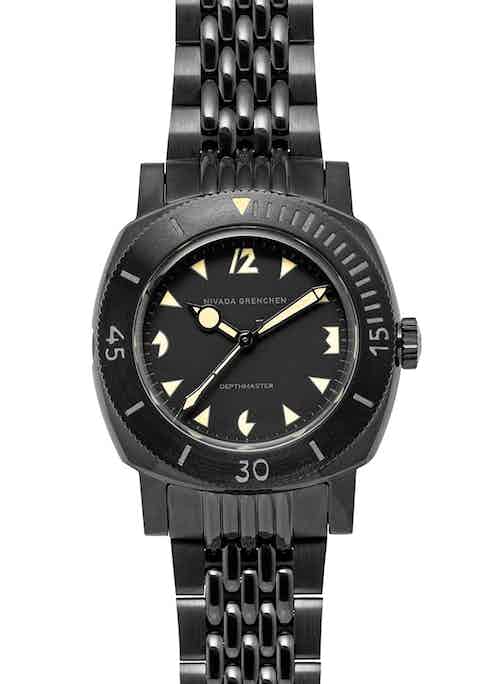 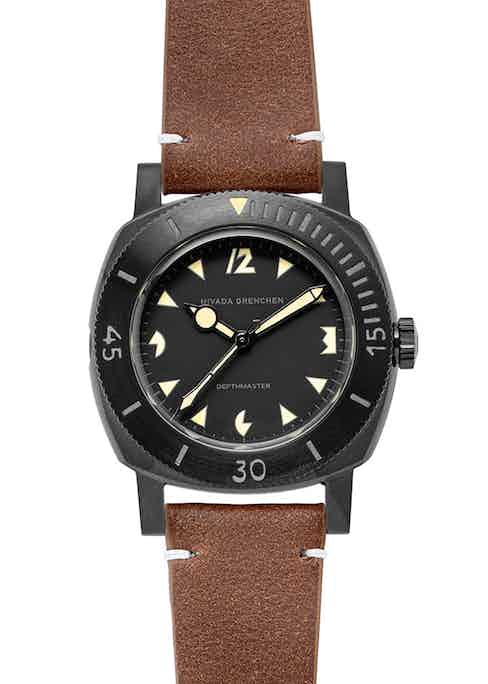 Historically speaking, Nivada had never manufactured a blacked-out Depthmaster, much less one that was on a “beads of rice” metal bracelet. But somehow as we discussed what a potential Nivada × Revolution & The Rake collaboration should look like, a certain image kept taking shape in our minds. A lot of this has to do with Laidet’s and my affection for all things late ’60s and ’70s, in particular the first generation of blacked-out watches to emerge from this erawhich, in the context of the time, were mind-blowingly avant-gardist.Says Laidet, “I remember talking to you about our favorite watches from the era and you mentioned two timepieces — the 1972 Porsche Design Chronograph made in collaboration with Orfina and the 1974 TAG Heuer ‘Dark Lord.’” These two watches were, of course, on my mind because they had both been revived this year. The Porsche Design watch was recreated to beautiful results with the Chronograph 1 to celebrate the model’s 50th anniversary, while during the 2022 Monaco Grand Prix, TAG Heuer unveiled its stunning new “Dark Lord.”In the context of the early ’70s, the idea of black coating on a watch, even a purpose-built tool chronograph, was crazily futuristic. Yet both of these brands, fueled by the inventive minds and unrelenting creativity of Ferdinand Alexander “Butzi” Porsche and Jack Heuer respectively, arrived at the same result. Of course, the coatings available at the time didn’t have the resilience of the black treatments today, resulting in vintage Porsche Chronographs and Heuer Dark Lords accruing considerable patina over time. But they are, nonetheless, incredibly cool.

“We started discussing about what if we were working at the Nivada R&D department in the ’70s and saw these watches," Laidet continues. "You said that we would want to create a blacked-out Chronomaster ‘Orange Boy’ and I started laughing and showed you something that I was working on...” With that, Laidet reached into the recesses of his phone’s photo albums and extracted the image of a blacked-out Depthmaster. Now the Depthmaster has always been one of my favorite dive watches. It was actually Nivada’s second dive watch, the first being the famous Depthomatic of 1964, the very first timepiece with a built-in depth gauge using a Bourdon-tube type device. Basically, water would enter the watch and the pressure would deform the tube, which would be translated into a reading for your depth. But a year later in 1965, Nivada would launch a watch that, in the context of its era, was absolutely radical.This was the Depthmaster, which was one of the first few commercially produced watches with an astounding depth rating of 1,000 meters or 3,300 feet. This is pretty damn incredible because at the time the vast majority of dive watches were rated to 100 to 200 meters of water resistance. What is even more cool about the Depthmaster was that it was totally different looking from the majority of other dive watches that were characterized by a round case, round rotating bezel and round luminous plots. Instead, the Depthmaster used a 38mm in diameter cushion case with muscular lugs, a thick knurled edge metal bezel without an insert, and in some versions, with totally unique highly luminous markers. Indeed, the markers which are based on a stylized Deco font deviate so much from the norm that in the dark they are immediately identifiable. Viewed underwater, you could never mistake a Depthmaster for anything else, such is their visual signature. Because the three, six and nine o’clock indexes resemble characters from the videogame, these Depthmasters were bestowed the amusing sobriquet “Pac‐Man” by vintage watch collectors.

The obvious question is, of course, how was it that Nivada was able to make a dive watch with a depth rating more than three times deeper than any other watch at the time? Says Laidet with a laugh, “This was one of the questions we had when we decided to revive the model. If you look at the original watches, you will see that there is no helium release valve. We added this valve when we revived the model in 2020 to increase the quality of the watch. But at the time, Nivada decided that they could achieve this depth rating simply by making a better watch.” Indeed, the Depthmaster was able to achieve this incredible rating due to (1) a stronger and tougher seepage-proof winding crown, (2) a special innerguard, (3) extra caseback threads and (4) double thickness of the crystal. 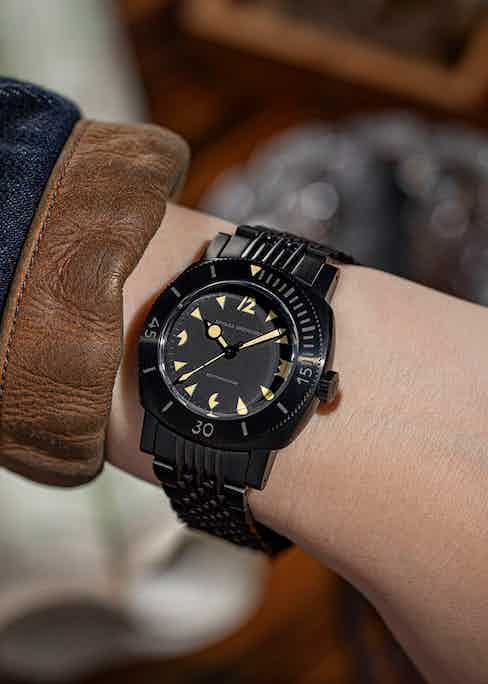 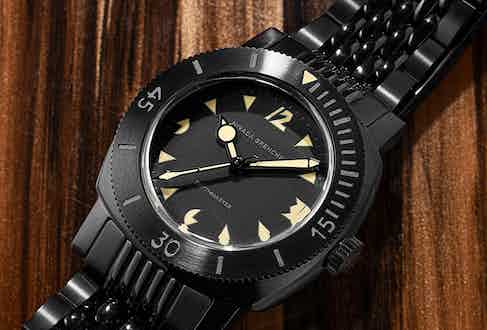 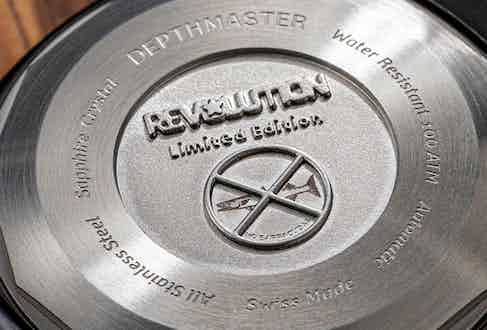 Until now, the legendary Depthmaster “Pac-Man” had only been created in brushed stainless steel examples and usually fitted on a robust rubber strap. But Laidet’s image was a mock-up for a blacked-out Depthmaster fitted to a blacked-out “beads of rice” bracelet. I was immediately struck by the design, in particular because there were no blacked-out dive watches ever made in the ’70s. Indeed, this was something that only emerged in the ’90s with the first PVD-treated Panerai watches. But the logic and pragmatism for a blacked-out dive watch was highlyappealing to both of us for four reasons. Firstly, it allowed the wearer to focus purely on the dial and bezel as his critical instrumentation. Secondly, I have always been told by divers that shiny objects underwater attract different species of fish, one of which is the extremely ravenous and aggressive barracuda, which is not ideal. Thirdly, as a military dive watch, any timepiece that is non-reflective is better. And fourthly, because well, it just looks badass.

Immediately we decided to launch a small series of these blacked-out, non- barracuda attracting, Pac-Man dialed dive watches. We decided to offer these watches with both a black “beads of rice” bracelet and also on a thick brown leather strap. But then the discussion turned to the specifics of the design, in particular the color of the luminous markers. We didn’t want to make them too strongly brown lest we veer into the dreaded “fauxtina” realm, which refers to Luminova that attempts to replicate the hue of aged tritium to an extreme. But at the same time, in order to correctly evoke the era of the ’70s and the watches we loved from this time, we wanted a slightly cream shade. So, how did we arrive at the final color? This is exactly what transpired. Laidet and I were both in need of a refreshment and decided to visit the Irish pub that was a stone’s throw from my residence in Geneva’s Old Town. Once suitably ensconced, we both ordered pints of Guinness, which were pulled to two-stage perfection there, meaning that the beer was poured at a perfect 45-degree angle to three quarters full, rested for 120 seconds and then filled straight on until the creamy head is just proud of the rim. As we clinked pint glasses, we both stopped mid-toast. We looked at the glasses in our hands and realized that the colors of the beer were the perfect representation of the ideal two colors of the watch, which are black for the case, dial and bracelet and Guinness cream for the markers. It was an Archimedes recognizing his bathwater rising and understanding the nature of volumetric displacement “Eureka” moment for the both of us, and it caused us to laugh.

As an amusing detail, we decided to add a “No Barracuda” engraving to the caseback as a kind of homage to “No Radiation” symbols found on military dive watches like the famous Tornek-Rayville. And accordingly, we decided to name our special ’70s inspired, blacked-out, 1,000-meter water-resistant dive watch the Depthmaster “No Barracuda.”

Shop the Nivada x Revolution & The Rake Depthmaster 'No Barracuda', now on TheRake.Com.