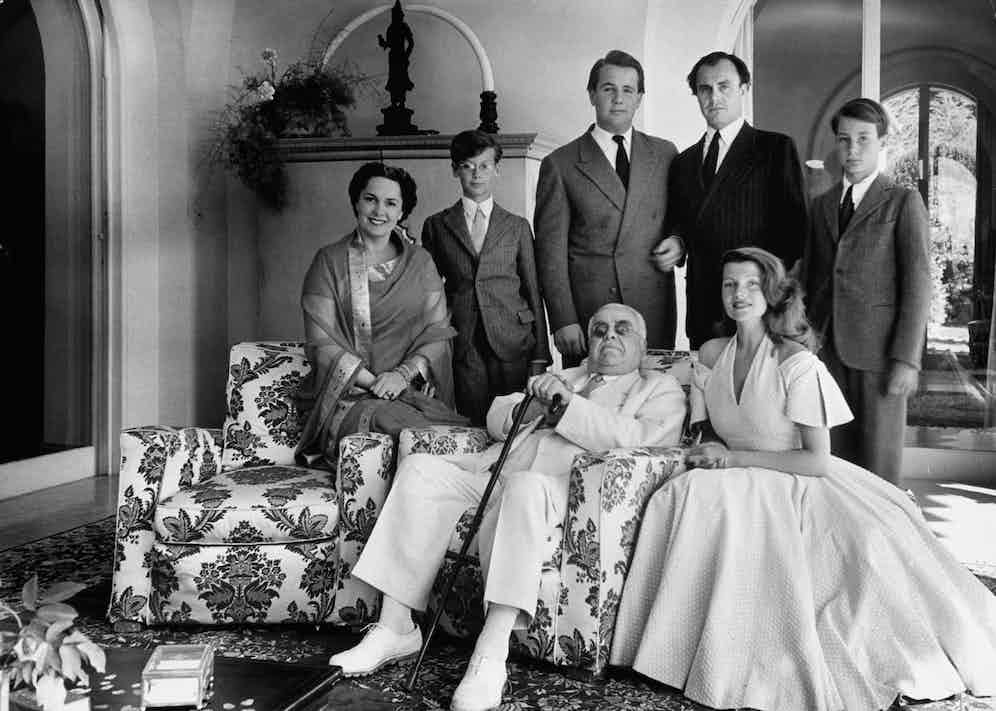 Let’s get one thing straight from the start: the Aga Khan is not a divinity. He has always politely but categorically denied all suggestions of Godhead status, most recently to Vanity Fair magazine. This won’t come as news to any but the most devoted of his flock, the 15 million Shia Imami Ismaili Muslims scattered in 25 countries across the world, for whom he is the 49th hereditary imam. They hail him as ‘the bringer of life’, and consider him to be the carrier of the eternal Noor of Allah (light of God).

To everyone else, Prince Shah Karim Al Hussaini Aga Khan IV has always seemed happier at the mammon end of the spectrum. This, after all, is a man described by Forbes magazine as one of the world’s 10 richest royals, with an estimated net worth of over US$13 billion. He owns hundreds of racehorses and premier stud farms, an exclusive yacht club on Sardinia, a private island in the Bahamas, two Bombardier jets, Alamshar — a £100 million high-speed yacht named after one of his prized racehorses — and several estates around the world, his principal residence being Aiglemont, in the town of Gouvieux, north of Paris.

The 77-year-old was most recently in the news when he finally divorced his second wife, Princess Gabriele zu Leiningen, a German former pop singer, after a decade-long legal battle during which he was accused of having an affair with an air hostess. Princess Gabriele’s eventual settlement was a reported £54 million. But the Aga Khan’s position is a little more nuanced than the jet-set playboy image that the tabloids persist in foisting on him. He shuns the spotlight — childhood friends have described him as “quite reclusive” and commented that “parties have never been his thing”.

As founder and Chairman of the Geneva-based Aga Khan Development Network, he spearheads an organisation that employs 80,000 people in 30 countries, and spans non-profit work in poverty-stricken and war-torn areas of the globe, along with a huge portfolio of very-much-for-profit businesses in sectors ranging from aviation and energy to telecommunications, pharmaceuticals and luxury hotels. In 2010, these generated US$2.3 billion in revenue, which no doubt kept the stud farms well stocked, but which also went to assuaging the material needs of his followers. Among the lofty aims the Aga Khan says he works towards are the elimination of global poverty, the promotion and implementation of secular pluralism, the advancement of the status of women and the honouring of Islamic art and architecture.

Since his abrupt ascension to the imamate as a 20-year-old in 1957, he’s had to help his Ismaili flock navigate the end of the Cold War, the end of colonialism in Africa and communism in Central Asia, and the continuous turmoil in the Middle East, where militant Sunni jihadists brand the moderate Ismaili as apostates. “An imam is not expected to withdraw from everyday life,” he told Vanity Fair, in an attempt to square his activities as a venture capitalist with his religious responsibilities. “On the contrary, he’s expected to protect his community and contribute to their quality of life. The imamate does not divide world and faith.” 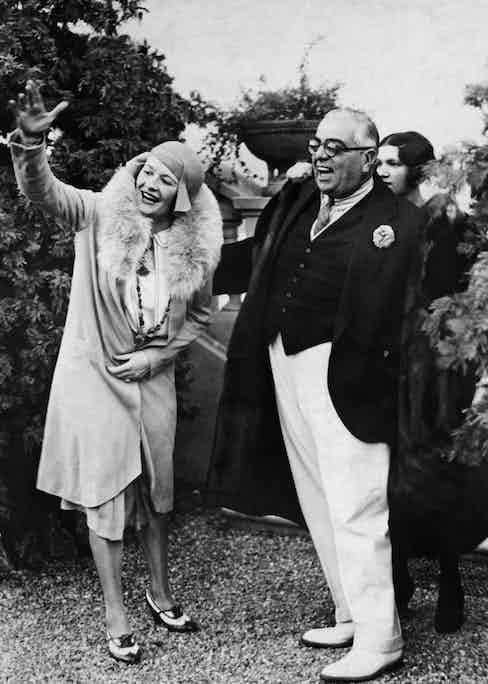 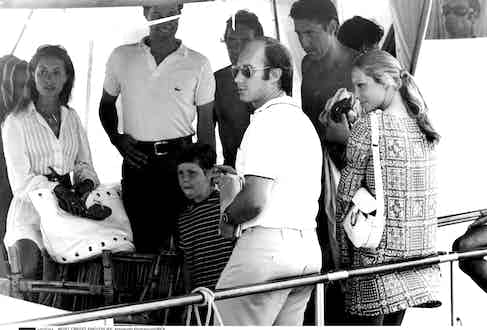 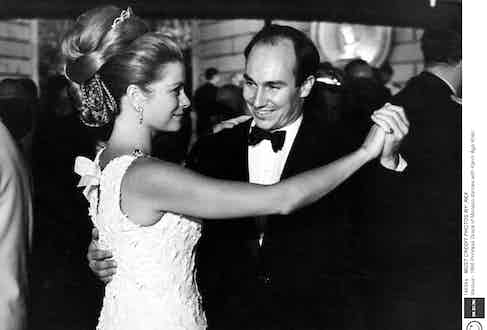 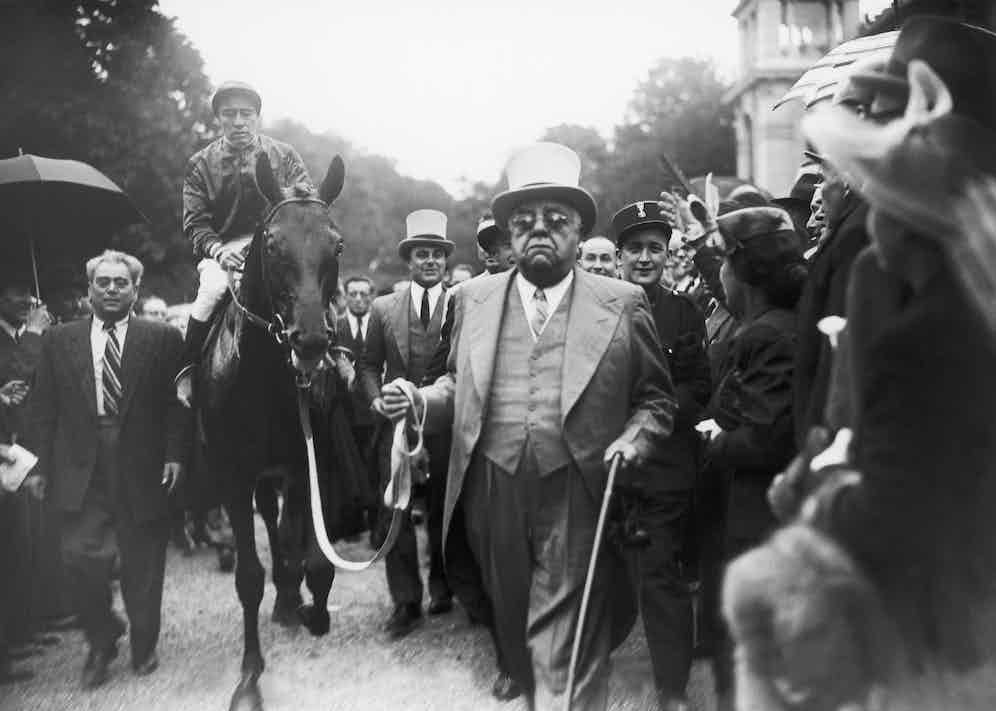 The Aga Khans have always been adept at the world-faith straddle. The title itself — meaning, in a combination of Turkish and Persian, ‘commanding chief’ — was granted in the 1830s by the Emperor of Persia to Karim’s great-great-grandfather, Hasan Ali Shah, when he married the Emperor’s daughter. But their line is claimed to descend directly from the Prophet Muhammad in the seventh century. The first Aga Khan had to flee Persia when the region descended into one of its internecine wars, finding sanctuary in India under the protection of the British, and taking an already illustrious retinue of up to 90 racehorses, hawks and hounds with him. Aqa Ali Shah, Hasan’s eldest son and the second Aga Khan, burnished the line’s reputation by not only founding various philanthropic and educational institutions that improved the lives of the greater Muslim community in India, but also by being such a crack shot that he’s estimated to have bagged more than 40 tigers in his lifetime. But it was the third Aga Khan, Karim’s grandfather, who really put the line on the theological — and sporting — map.

Sir Sultan Muhammed Shah, Aga Khan III, was just under eight years old when, in 1885, he assumed the imamate on Aqa Ali Shah’s death. The following year, Queen Victoria conferred the title ‘His Highness’ upon him, acknowledging the fact that many members of the Ismaili community reside in Her Majesty’s territories (the current Aga Khan’s friends and associates have trimmed the honorific, referring to him as ‘HH’). In the early 1900s, Sir Sultan moved to Europe, in part to develop the family’s horse-breeding and -racing interests. The success of that scheme can be measured in his four Epsom Derby winners and the 13 times he was anointed British flat racing Champion Owner. But he was, during this period, keeping an equally assiduous eye on his flock, establishing a large network of hospitals, schools, banks and mosques for them. “My duties are wider than those of the Pope,” he once elaborated. “The Pope is only concerned with his followers’ spiritual welfare.” 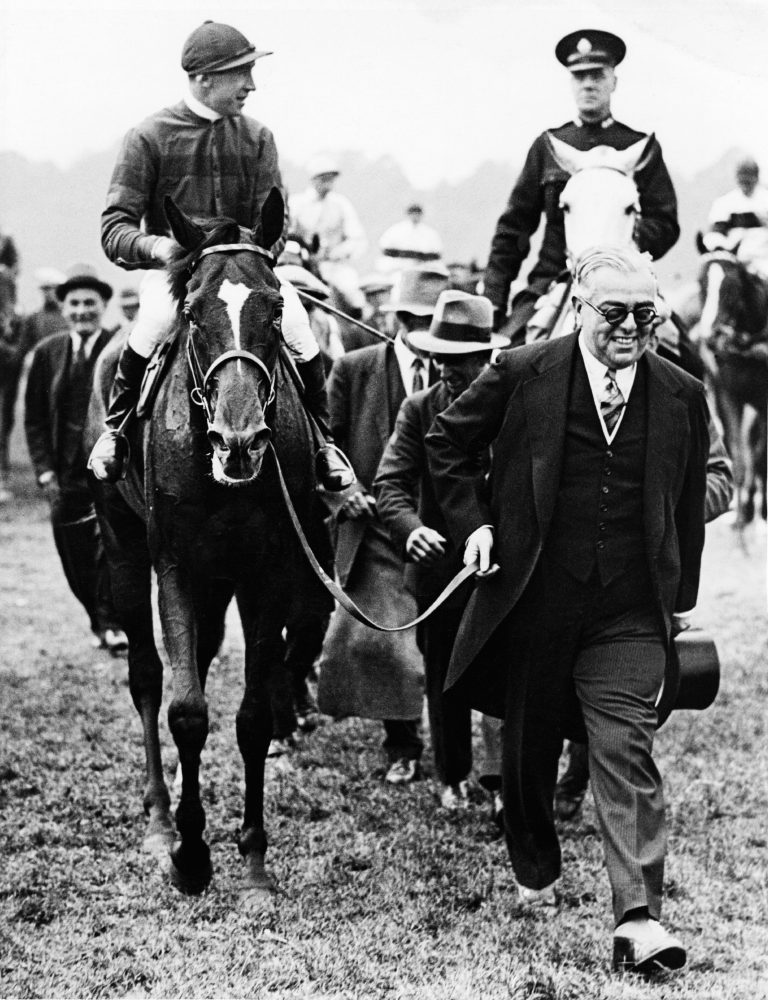 1930, Surrey, England - Aga Khan III, a keen racehorse enthusiast, triumphantly leads the winners of the 1930 Derby at Epsom Downs. The horse, ridden by Harry Wragg, is the first of five racehorses, owned by the Sultan, to win at the event

The Ismailis responded in kind. On Sir Sultan’s Golden Jubilee in 1937, they presented him with his weight in gold, with 30,000 onlookers cramming a square in Bombay to witness the spectacle. His Diamond and Platinum Jubilees, likewise, saw him showered with the appropriate bling. Such hauls, however, pale in comparison to the zakat money traditionally paid to the Aga Khan by members of the Ismaili community; it’s thought that those with the means to do so provide a tithe of some 10 to 12 percent of their annual income, which could amount to hundreds of millions of dollars a year. These windfalls are strictly not for the Aga Khan’s personal use (and the current incumbent lives a less lavish lifestyle than the average multi-billionaire horse-racing magnate, ostentatiously driving an Audi), but are diverted into his business ventures. The key to helping the least fortunate of his disciples, Sir Sultan once said, was to marry capitalist investment with social goals.

Sir Sultan’s eldest son and the current Aga Khan’s father, on the other hand, was keen to emphasise the ‘marry’ part of that equation. Prince Aly Khan was born in Turin in 1911 to the second of Sir Sultan’s four wives, an Italian ballerina. He was sent to study law at Lincoln’s Inn, but preferred to throw himself into London’s interwar social life. He met his first wife in 1933, though she then possessed an inconvenient banking-dynasty husband; but before the first course was tidied away at a Deauville dinner party, he’d asked Mrs. Loel Guinness, née Joan Yarde-Butler, an aristocratic English beauty, to marry him, which she finally did in Paris three years later. Karim, the current Aga Khan, was born in December 1936. 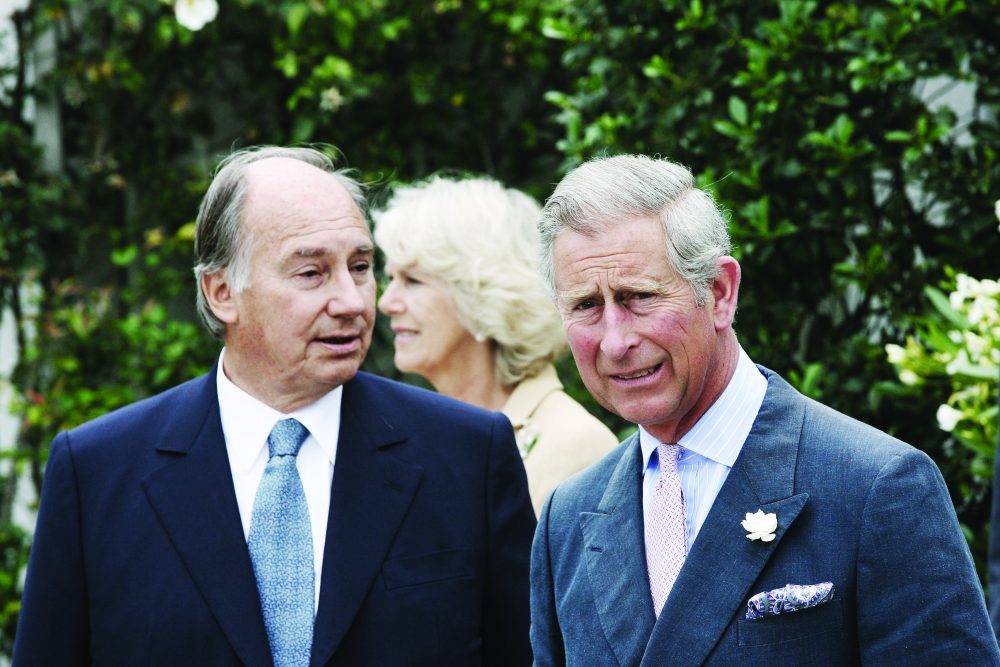 Aly, who accepted the role of playboy with far more gusto than his son has ever countenanced, had a notorious affair with Pamela Harriman, the English-born socialite whom another consort, William S. Paley, admiringly described as “the greatest courtesan of the century”. He was also linked, at various times, with Zsa Zsa Gabor, Judy Garland and Kim Novak. However, he’s best known for his romance with Rita Hayworth, whom he met on the Côte d’Azur in 1948 shortly after she divorced Orson Welles. They married a year later, with a reception at Aly’s own Château d’Horizon near the Mediterranean, where 100 guards and a boat patrol kept the hacks and paparazzi at bay, and Aly filled his pool with Hayworth’s favourite perfume, Arpège by Lanvin. The pair divorced in 1953, with Hayworth lamenting, in a more-in-sorrow-than-in-anger kind of way, “Aly is nice, but he really doesn’t understand family life.”

Given the rakish swathe his son was cutting through the fleshpots of Europe, it’s perhaps no surprise that Sir Sultan opted to skip a generation when passing on the imamate on his death in 1957 — although, in presenting the torch to his grandson, he spun it as a white-heat-of-technology succession. “In view of the fundamentally altered conditions in the world... including the discoveries of atomic science,” his will read, “I am convinced that it is in the best interest of the Shia Muslim Ismaili Community that I should be succeeded by a young man who has been brought up and developed... in the midst of the new age.” Thus, Karim became the ‘Imam of the Atomic Age’ while still a Harvard student, and quickly put aside those devil-may-care aspects of his inheritance — the competitive downhill skiing, the Maserati racing (he would habitually drive at 90–145mph, “road permitting”) — in order to embrace his very grown-up duties. “I was an undergraduate who knew what his work for the rest of his life was going to be,” he said.

For the past half-century, the fourth Aga Khan has been refining that work on both the spiritual and temporal planes. His continued racing wins keep him in the very top echelon of the bloodstock world. In 2012, he won a record-breaking seventh Prix de Diane, France’s most prestigious horse race, held at Chantilly, a 16th-century Domaine near his estate on which he’s spent €40 million, restoring it to its “princely lustre”. 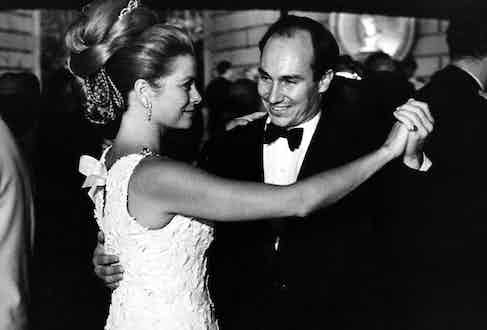 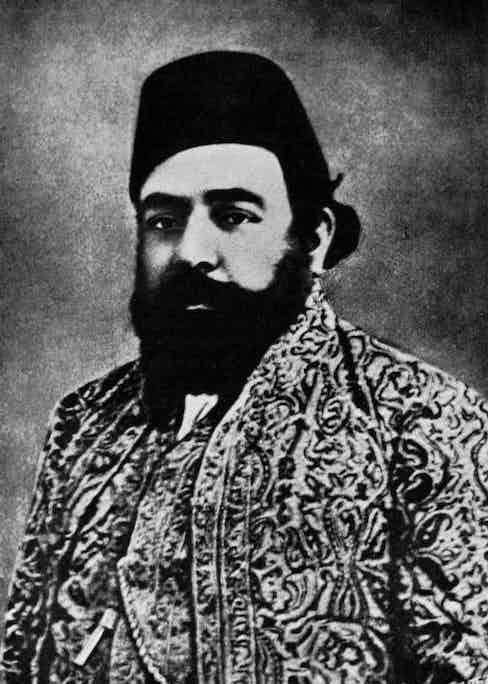 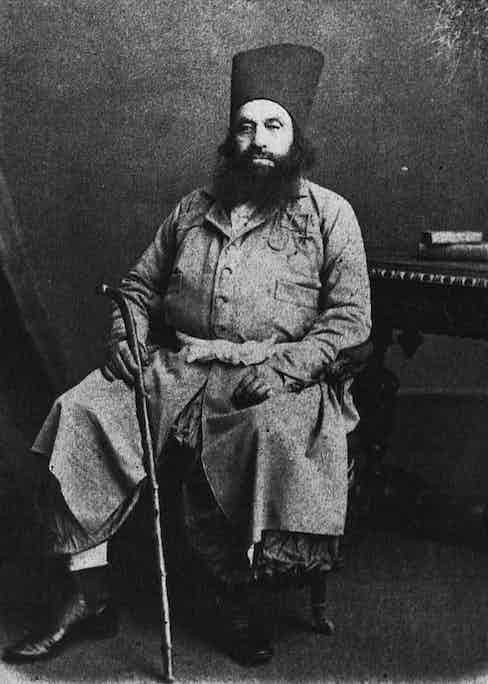 Meanwhile, the Aga Khan Development Network has overseen projects as diverse as restoring the mud walls of the 14th-century Djingareyber Mosque in Timbuktu (the oldest earthen building in sub-Saharan Africa), repairing key architectural components of the Old City in Afghanistan’s capital, Kabul, and building a huge hydroelectric power network in Uganda that now brings 18 hours of electricity each day to the poor West Nile area, where there had previously been a scant four hours every other day. “He does a bloody good job balancing the task of increasing his capital with that of advancing the needs of his followers,” his friend, former World Bank President James Wolfensohn, told Vanity Fair.

As his tenure winds down, the verdict on HH, the Imam of the Atomic Age, is that he’s kept the imamate humming through some tricky geopolitical challenges, and avoided any risk of catastrophic meltdown. The succession seems assured, with his three elder children working within the development network, and following his protracted divorce, his long-time companion, Danish-born Beatrice von der Schulenburg, daughter of ’60s folk singer Frederik van Pallandt (of Nina & Frederik fame), may step up to assume a larger share of the spotlight. It’s maybe the least that a relatively unassuming billionaire broker and breeder-cumsemi-divinity deserves. “He is many things to many people,” says James Wolfensohn of the fourth Aga Khan. “But for a god, he’s a fantastically good friend.”