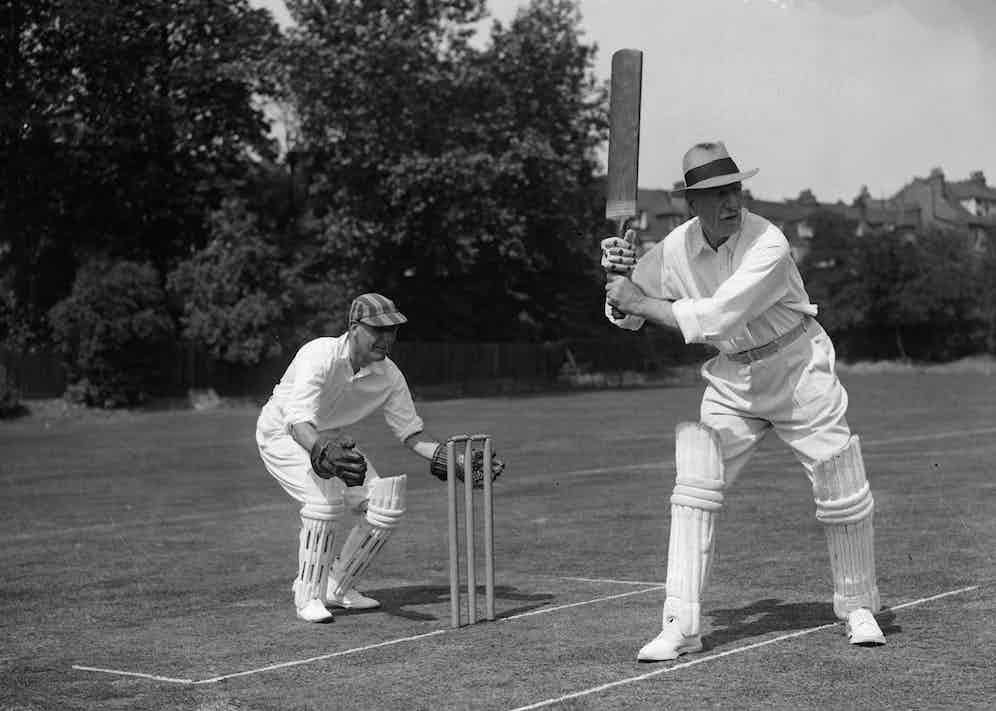 Captain of the actors' team C. Aubrey Smith batting and captain of the musicians' team B Walton O'Donnell keeping the wicket at the annual actors vs musicians match in aid of the Musicians Benevolent fund, at Hampstead Cricket Club, London, 1935. Photo by H. Allen/Topical Press Agency/Getty Images.

On the morning that Laurence Olivier first arrived in Hollywood, he checked into the Chateau Marmont hotel to discover a handwritten note already waiting for him with the concierge. It read: “There will be nets tomorrow at 9am. I trust I shall see you there.” This seems about right for the calling card of the Hollywood Cricket Club: terse, cordial, presumptuous, and with just the right amount of suspense.

The young Olivier had no cricket flannels, and certainly nothing resembling a bat. But, bound by a sort of schoolboy duty to the national folly, he appeared at the grounds of the Hollywood Cricket Club the next morning in a pair of boots that he’d borrowed from Boris Karloff (a boat-like size 13 – Olivier stuffed the toes with newspaper before remarking that Karloff must have pinched them off the set of The Bride of Frankenstein). The welcoming arm twist had come courtesy of C. Aubrey Smith, a white-whiskered former test cricketer who’d found favour in his autumn years as officer-and-gentleman fodder for the British invasion. On his first session with the club in May 1933, Olivier soon discovered that the old boy conformed to type, receiving a two hour tirade against the deficiencies in his technique, a stiff drink, and an invitation to dinner in the order named.

This was a club that had its priorities firmly in order. At the top, an obsession with the sport that would make even the old birds in the M.C.C. lounge groan, followed closely by an appreciation of the game’s liquid assets, and finally an utter disinterest in who you happened to be off the field. Let the opposition be distracted by the slip cordon of Sherlock Holmes (Basil Rathbone) Sinbad the Sailor (Douglas Fairbanks Jr.) and Frankenstein’s Monster (Boris Karloff) – if you’re putting down catches, you can make the sandwiches (or at least prepare the Lobster Thermidor and make sure the Veuve is on ice.)

"If you’re putting down catches, you can make the sandwiches (or at least prepare the Lobster Thermidor and make sure the Veuve is on ice.)"

Smith had long dreamed of annexing a corner of the Home Counties to Southern California, but it wasn’t until 1932 that he’d pulled enough errant Englishers into his orbit to populate a side (“Aubrey found us playing on rough fields under dangerous conditions” wrote Boris Karloff with just a splash of ham horror.) When the time came to pick a spot, the founding father took the brief as literally as possible, transplanting five cartloads of English grass seed onto a field in the Hollywood hills to make a wicket, and erecting a nostalgic Victorian pavilion at the cost of $30,000. The spiritual clubhouse for the team remained, however, Aubrey Smith’s home at 2881 Coldwater Canyon Drive – a wide and low Californian villa that, underneath it’s raised Union Jack (not to mention a weathervane constructed from a set of old stumps), seemed an unofficial embassy for Britannia’s lost sons.

There were certainly enough of those to go around. David Niven, a club regular, recalls how Hollywood’s golden years had become “a bonanza for British character actors”, with the side-effect that the playing fields of UCLA were swarming, by the late 30’s, with cut glass accents and Old Boys ties. “Crashes were frequent on Sunset Boulevard when amazed local drivers became distracted by the sight of white flannel trousers and blazers on the football ground.” he wrote in his autobiography. The fault here doesn’t lie entirely with the drivers. The Hollywood CC’s match day uniform seemed to have been dragged wholesale from the wardrobe department of a camp Oxbridge detective romp (jaunty harlequin hats above a magenta, mauve and black double-breasted blazer) while the club captain appeared to be auditioning for the role of English Squire #4 in a country house murder mystery: baggy plus-fours trinketed with Old Carthusian garters and gaudily checked socks. It won’t surprise you to hear that he often took a pipe with him to the crease.

This was the club’s enduring appeal: a hyper Englishness inflected with the bravado of Hollywood; a green and pleasant land hothoused by the Californian sun. At the Club’s AGM in May 1945, Smith expressed a vote of thanks to the then-celestial object Cary Grant for his fundraising efforts, before going on to address, at much greater length, the dilemma of how to keep moles from damaging the wicket. There’s something similarly joyous about Boris Karloff writing to the Screen Players trade rag as if it were a Sussex village newsletter, inviting ‘’All cricketers and prospective cricketers to the Sunday matches”, details of which could be obtained from “the hard working secretary, Mr. Claude King”. PG Wodehouse was at the time the highest paid screenwriter in Hollywood (and, as it happened, the club’s first secretary and sometime scorer.) But even he would have struggled to inflect the HCC’s most famous anecdote with more homegrown sweetness and light. After dropping a simple catch at first slip, C. Aubrey Smith immediately paused the match and called for his butler, who was summarily ordered to fetch him his glasses on a silver platter. But then, minutes later, the craggy captain dropped an even simpler ball. Snatching the spectacles from his face, he cried out “The damn fool brought my readingglasses!" The stars may have expired and the grasses grown long, but there is some corner of a foreign outfield that is forever England. 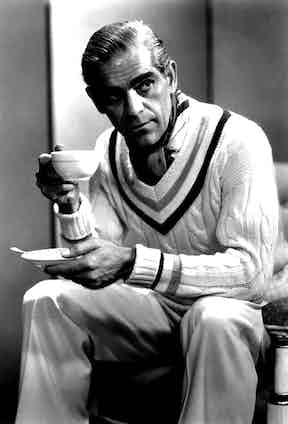 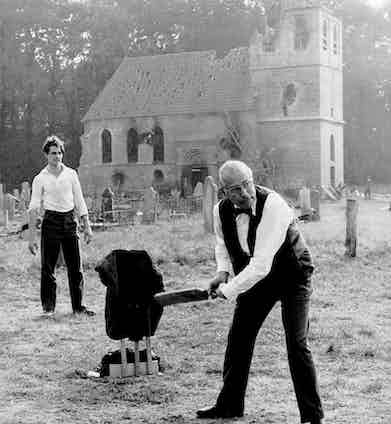 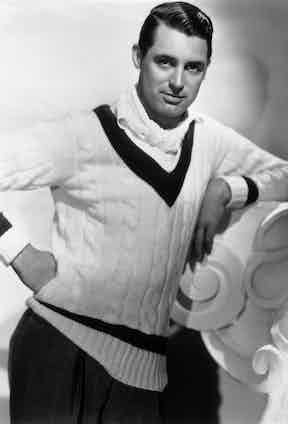 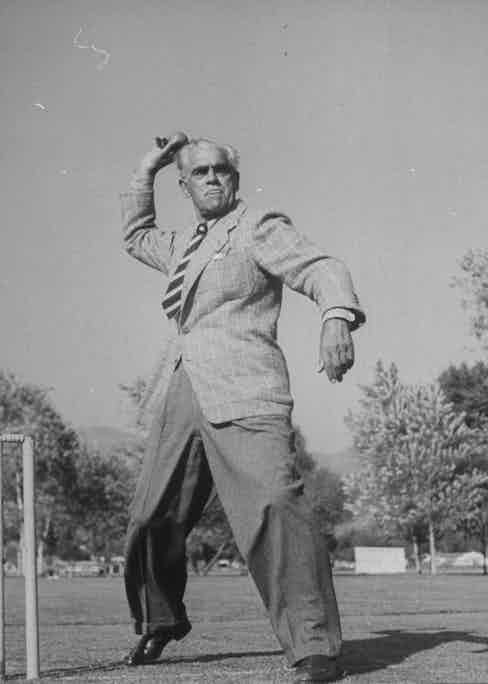 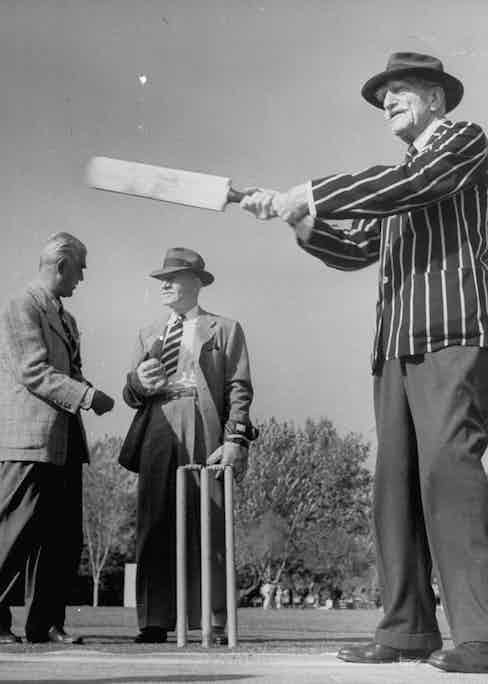 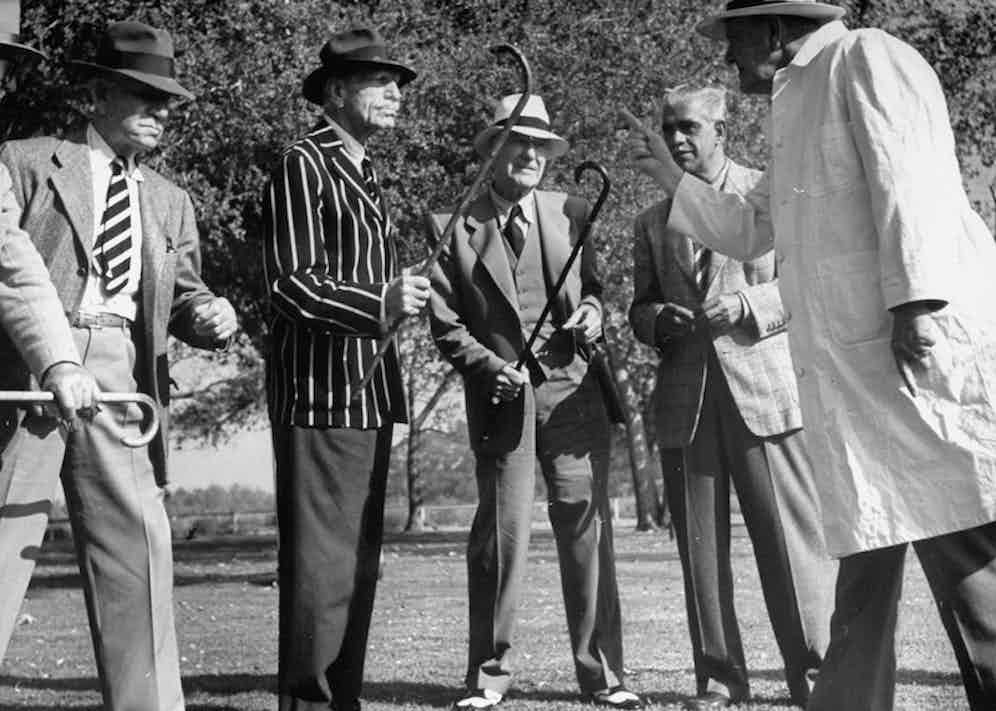