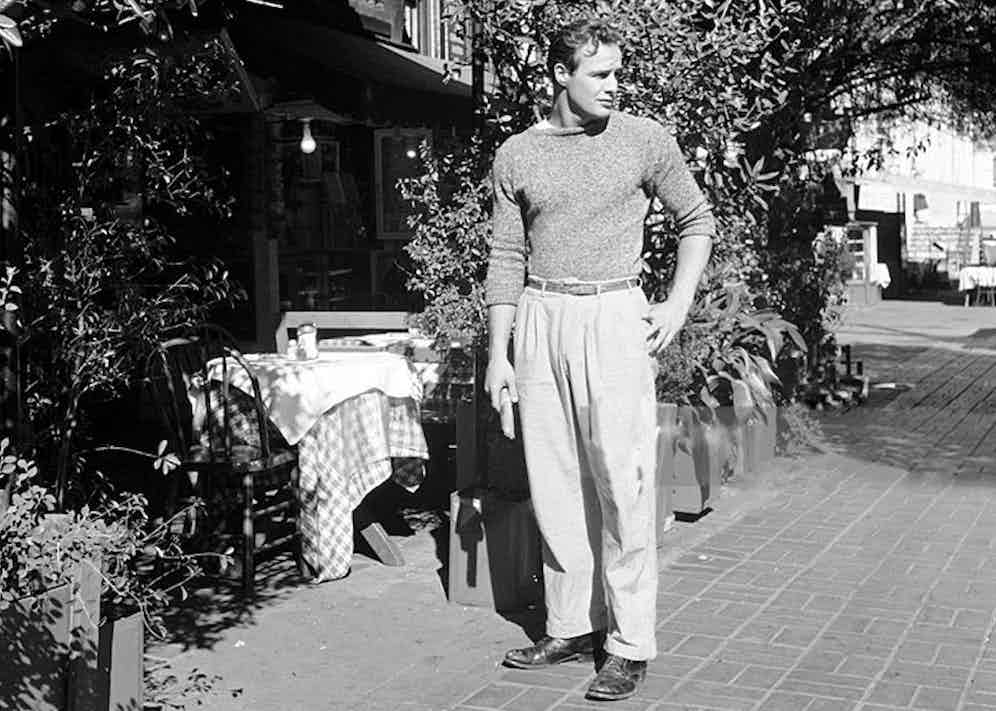 Marlon Brando photographed outside a cafe by Edward Clark, 1949.

By the time Marlon Brando died in 2004, many of his credentials – style icon, sex symbol, activist, method actor – had long since taken their final bow. TheNew York Timeswriter Manohla Dargis summarised his life “as if it were some kind of movie, one with a strong opening act, a bewildering middle and a disappointing conclusion.” But if his lifewerea movie, the wardrobe department had a strong role to play in Brando’s early public identity, particularly in the 1950s. A key period of change in many social and cultural arenas, including a new wave of cinematic realism, Brando threw himself into the decade with his brooding intensity, unpredictable reactions and improvised lines, and it was his role inA Streetcar Named Desirethat changed how he – and we – would dress for decades to come.

The humble T-shirt was an item previously assigned to the role of undergarment or as part of military-issued uniform. As a result, what was traditionally a loose-fitting, plain and functional shirt was reimagined on the set ofStreetcar; legend has it that the director had the shirts washed multiple times to shrink them, cut open in the back and then stitched onto Brando. The result exposed more of a man’s body than had been seen in mainstream cinema before, shocking critics and making waves in the industry. Brando’s physicality was a force, heightened by the fact that a lot of his most memorable scenes are filled with tension not from what hedoesor what hesays– but from what he doesn’t. Equally, his style is constructed around what he refuses to wear; the white T-shirt is so significant because of what it eschews. No one could have predicted its almost instant acceptance. Stretched over Brando’s broad shoulders and barely containing his flexing arms, Gore Vidal wrote that it caused a metaphorical “earthquake”, such was the impact of Brando’s hyper-masculine physique and rejection of a traditional male aesthetic. 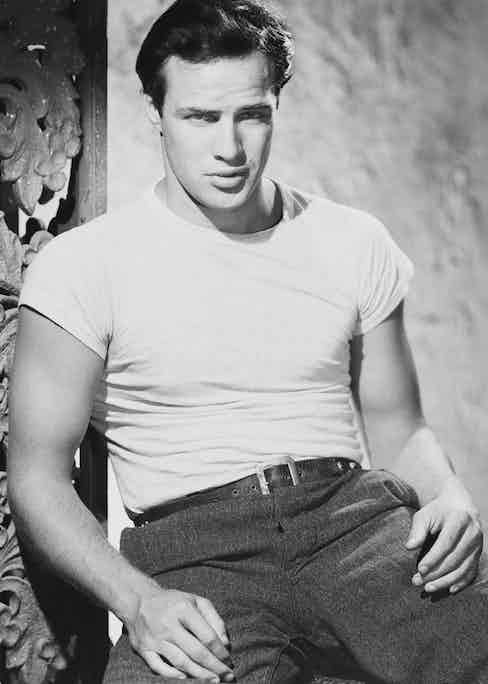 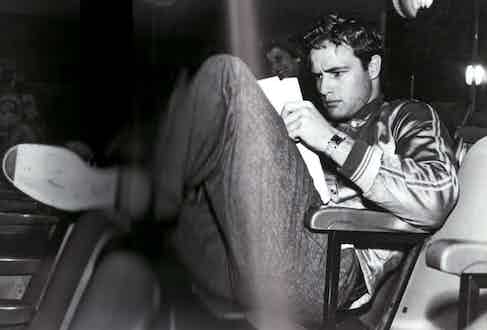 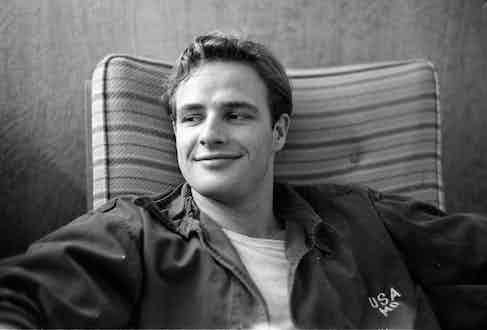 The sense that this produced a new definition of masculinity was not surprising; having been expelled from military school at a young age, Brando appeared to have rejected the institutional ideals that it represented. Interestingly, though, his style often referenced his military experience; chunky work boots, plain white T-shirts, US Army overshirts, aviator sunglasses and nautical stripes all infiltrated his off-duty look. Today, this same look evokes a nostalgic but timeless nod to the era. At 19, Brando was also gifted a militaristic Rolex Oyster Royalite Observatory by his parents, the same year he tried (unsuccessfully) to enlist in the Army, and - clearly a fan - could be seen wearing various Rolex models throughout his career.

Later, his role inThe Wild Oneexposed a new brand of bad-boy icon: the motorcycle gang reeked of danger, and Brando became synonymous with the heavy biker jacket and chunky metallic jewellery. So potent was his image that Schott’s W-Style One Star (worn by his character Johnny Strabler) became a best-seller, clothing the backs of numerous bikers and punks. American high schools were quick to ban the style, inadvertently making it all the more powerful as a rebellious status symbol. However, while Brando’s on-screen anti-hero became a style icon, the actor was more likely to be found in flannel check shirts, loose cotton trousers and fitted knitwear.

Such a casual approach to his wardrobe put him at risk of looking sloppy, but a supercharged current ran through Brando that electrified both his acting and his apparel. He was a storm about to break, straining at the seams and tearing at the stitches, immortalised forever as Tennessee Williams’ Stanley Kowalski. The simple white T-shirt, rolled-up Levi’s and motorcycle jackets were undoubtedly all good ideas waiting to happen, but had they been executed by anybody else, would they have had the same cultural influence? We’ll never know – and we have Brando to thank for that. 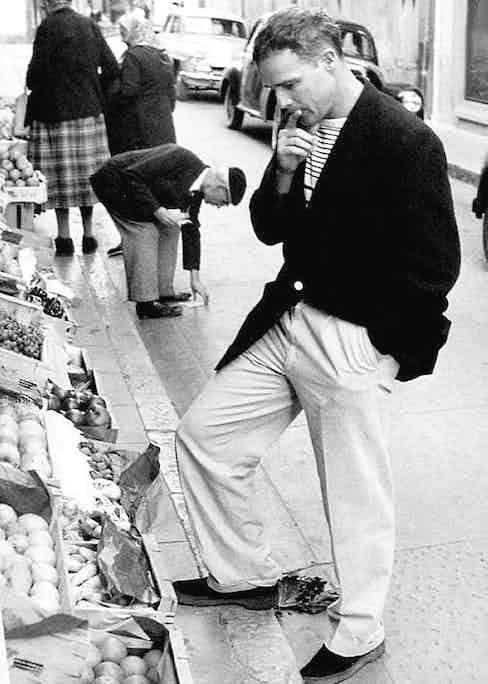 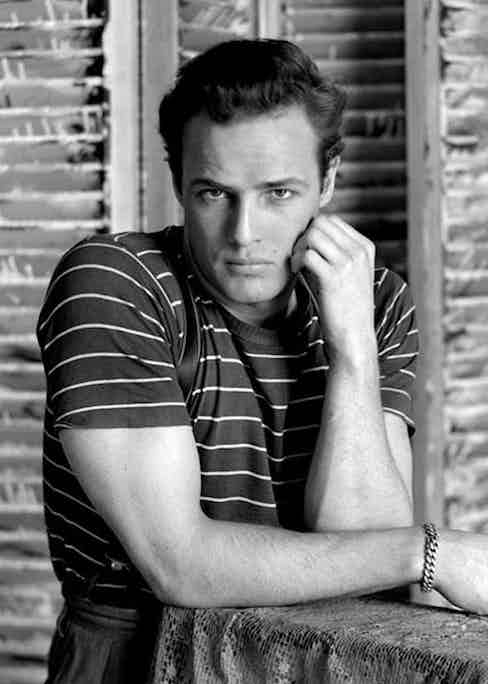 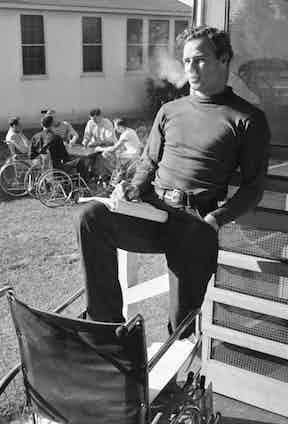 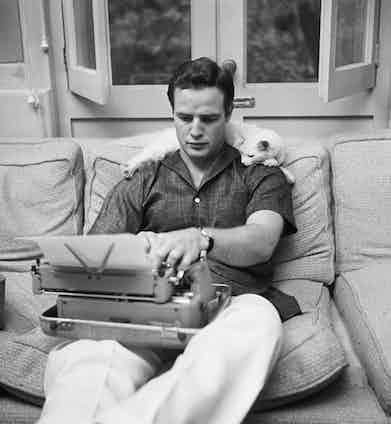 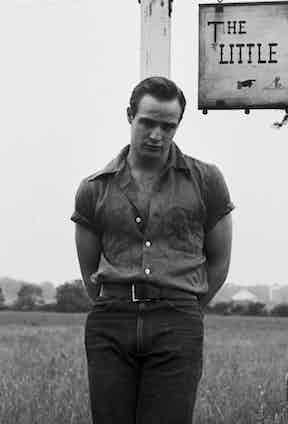 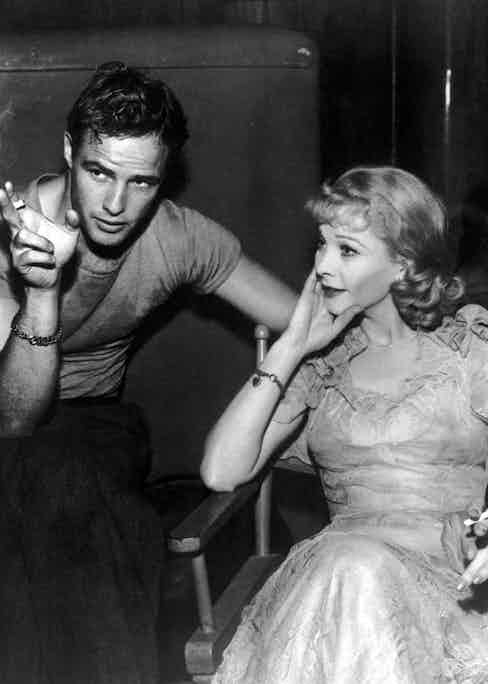 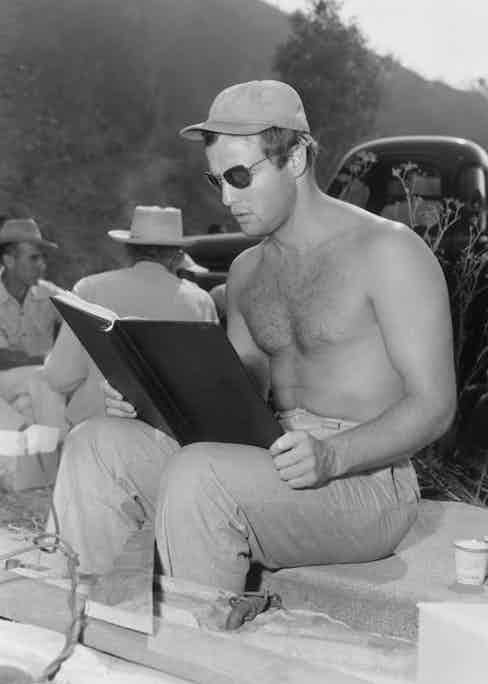