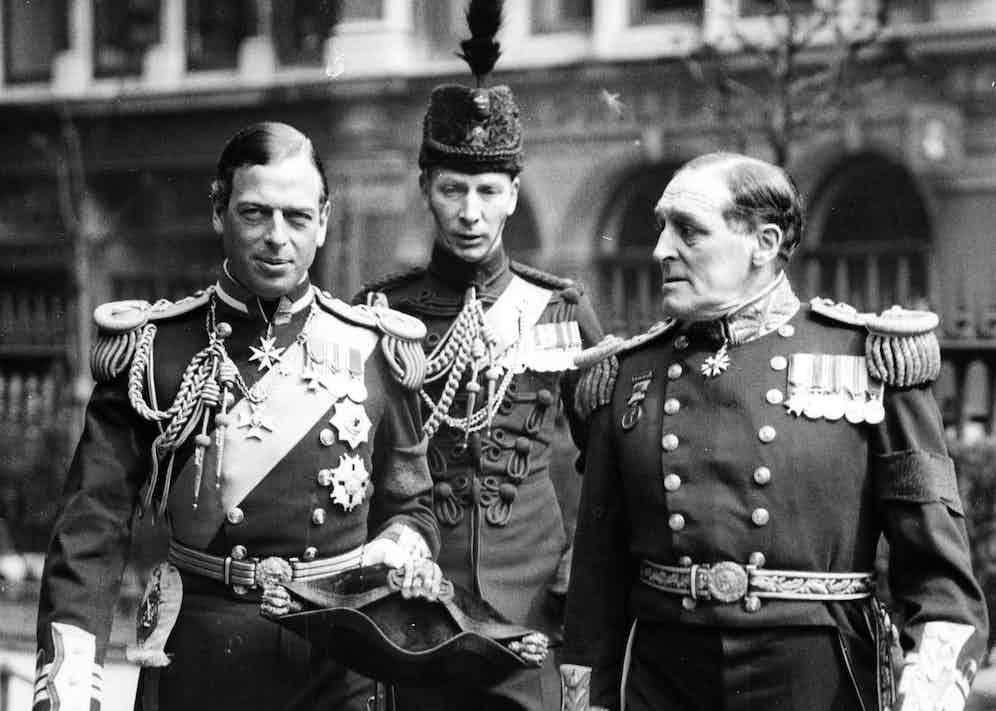 The basic details sound like the script of a slightly far-fetched television miniseries. A British royal prince, with matinee-idol looks and an artistic temperament, falls into bad company and gets hooked on hard drugs. He leads a scandalous sex life with both men and women, and is rumoured to have fathered several illegitimate children. His impeccable dress sense makes him a style icon. He marries a beautiful European princess, and they become both the nation’s favourites and the toast of high society, but the bisexual affairs allegedly continue. Leaving the Royal Navy, which he hates, he becomes the first royalty to work as a civil servant. Having returned to active service in World War II, he is killed before he is 40 years old in a mysterious air crash, all the papers on which have disappeared. Conspiracy theories abound. Was he rubbed out by British intelligence because of his presumed sympathies towards Nazi Germany? Welcome to the astonishing story of George, Duke of Kent, the forgotten prince.

George Edward Alexander Edmund was born on 20 December 1902 at York Cottage on the Sandringham Estate in Norfolk, the fourth son of the man who would become George V and his wife, Mary of Teck. Unlike his brothers Edward (born 1894, known as Prince of Wales and Duke of Windsor, later Edward VIII), Albert (born 1895, later George VI) and Henry (or Harry, born 1900, later the Duke of Gloucester) and his only sister, Mary (born 1897, later the Princess Royal and Countess of Harewood), George was an Edwardian, not a Victorian: his grandfather, Edward VII, was about to enter the third year of his nine-year reign when George was born. There was certainly something of the new age about him. In a generally colourless family, he was to prove himself different in a number of striking ways.

Academically, he was easily the brightest of the siblings. After private tutoring and prep school, at 13 years old, like Edward and Albert, he was sent to naval college in preparation for a career in the Royal Navy. Although he detested the naval life — not least because he suffered from acute seasickness — he remained in the Royal Navy until 1929. He then briefly held posts at the Foreign Office, before moving to the Home Office, thus becoming the first member of the British royal family to work as a civil servant — he was, incredibly enough, designated to be a factory inspector.

"He liked her independent spirit and the fact that she did not complain when he drove his sports cars too fast."

George made a highly successful marriage to a second cousin, Princess Marina of Greece and Denmark, whom he described as “this lovely, chic creature”. Theirs was the last marriage between a son of a British sovereign and a member of a foreign royal house. He liked her independent spirit and the fact that she did not complain when he drove his sports cars too fast. Seven weeks before they married on 29 November 1934, in front of a 2,000-strong congregation at Westminster Abbey, followed by a Greek Orthodox service at Buckingham Palace, George was made Duke of Kent, Earl of St. Andrews and Baron Downpatrick. 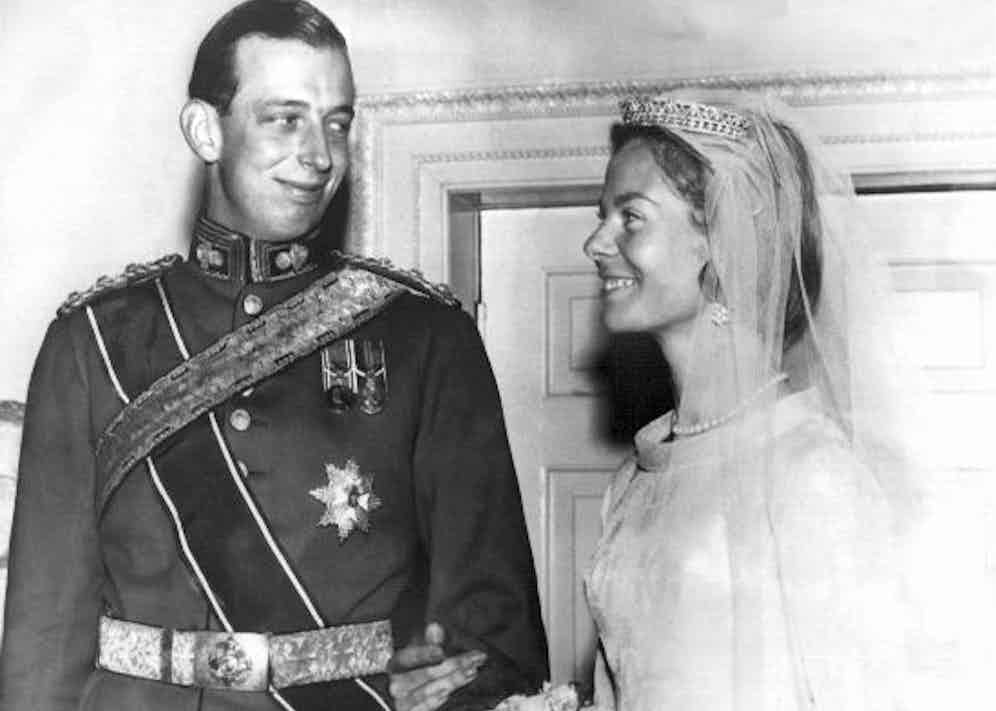 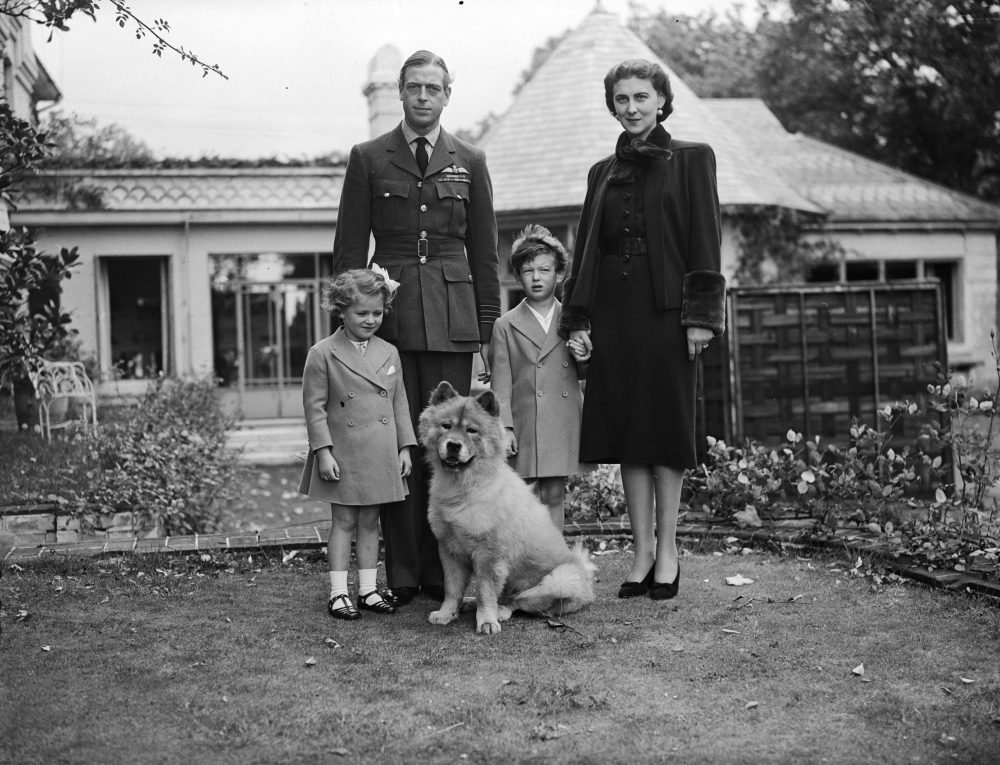 Duke and Duchess of Kent with Edward and Alexandra ,1938

The Duke and Duchess of Kent became a hugely popular couple with the British public, and their home at 3 Belgrave Square, for which he designed the interior decoration, became a focal point for the pre-WWII ‘in crowd’. “That dazzling pair dominated London society, gathering around them some of most brilliant personalities from the arts, entertaining lavishly and generating an interest in their way of life that was unparalleled in the history of the royal family,” wrote Christopher Warwick in George and Marina: The Duke and Duchess of Kent, the only biography of this overlooked royal prince to date, and it was not authorised by the royal family.

Handsome, somewhat taller than his average-sized family, and glamorous, George was, according to Warwick, “the most interesting, intelligent and cultivated member of his generation”. He also held a fascination for the arts, theatre and interior decoration, an interest that was shared with his mother, Queen Mary.

He played the piano well, spoke French and Italian, liked fast cars, preferred skiing and sailing to shooting, possessed a clear streak of narcissism, and sometimes unleashed an explosive temper. George was particularly considerate towards his youngest brother, Prince John, who died in 1919 at the age of 13 due to epilepsy. Above all, the multifaceted George also had a dangerous taste for (sometimes sordid) adventure. 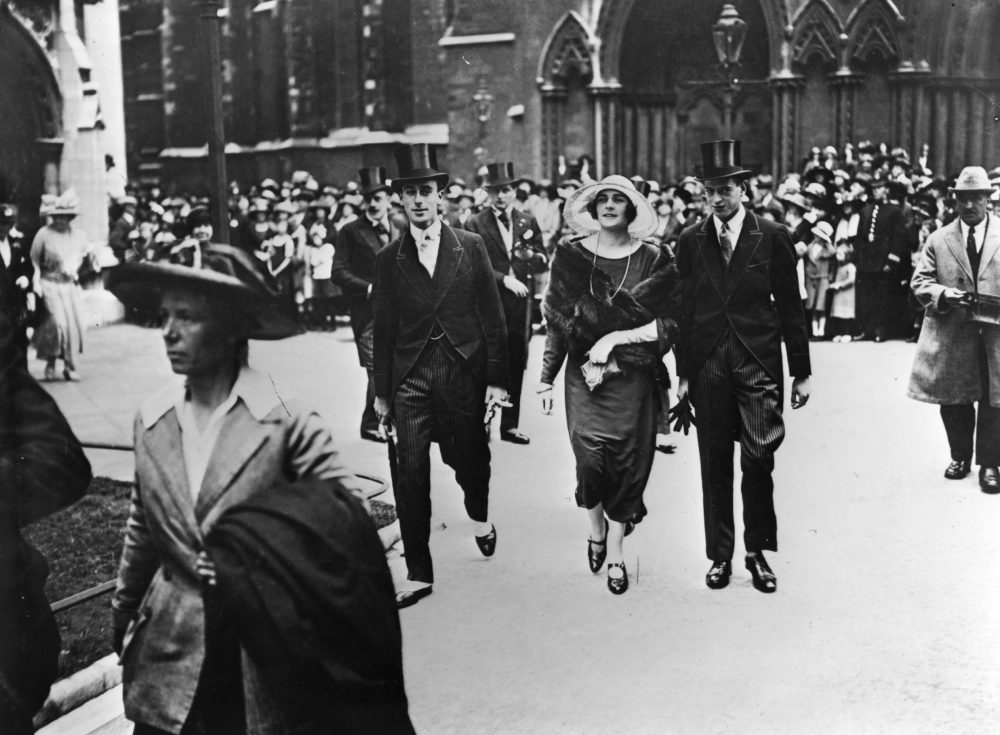 Despite the age gap, George was especially close to his brother Edward, the fashionable Prince of Wales. From the late 1920s, they lived together in York House, a part of St. James’s Palace. In A King’s Story, published in 1951, the then Duke of Windsor wrote, “Although George was eight-and-a-half years my junior, I found in his character qualities that were akin to my own. We became more than brothers — we became close friends.”

Their unusual kinship of spirit included an interest in clothes, socialising, the good life, dubious company, getting into trouble and irritating the establishment, particularly their father, the austere King George V. From the mid-’20s to the mid-’30s, the princely bachelors were style arbiters and favourites of the social pages on both sides of the Atlantic. Despite his own chequered reputation, Edward seems to have been given the task of reining in his tearaway brother.

Popular legend states that Edward had to wean George off morphine and cocaine in the late ’20s after the younger prince fell into the clutches of the notorious Kiki Preston, an American socialite known as ‘the girl with the silver syringe’. George allegedly engaged in a ménage à trois with Jorge Ferrara, the bisexual son of the Argentine ambassador to London. Gossip suggested that George and Preston produced a son, Michael Temple Canfield, who was then adopted by American publisher Cass Canfield, the first husband of Lee Radziwill, sister to Jackie Kennedy. Preston later died after jumping from the window of a New York hotel in 1946.

Before and after his marriage to Princess Marina, it was widely known that George had a series of affairs with both sexes, and he was supposedly particularly entranced by an African-American cabaret star, Florence Mills. Among his better-known lovers were, supposedly, English musical star Jessie Matthews, banking heiress Poppy Baring, socialite Ethel Margaret Whigham (later the scandalous Duchess of Argyll) and romantic novelist Barbara Cartland (who had alleged that he was the father of her daughter Raine McCorquodale, who, later in her life, became Princess Diana’s stepmother). 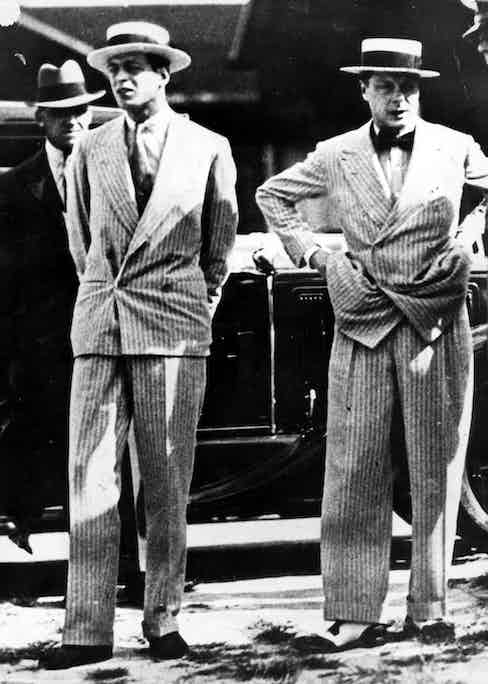 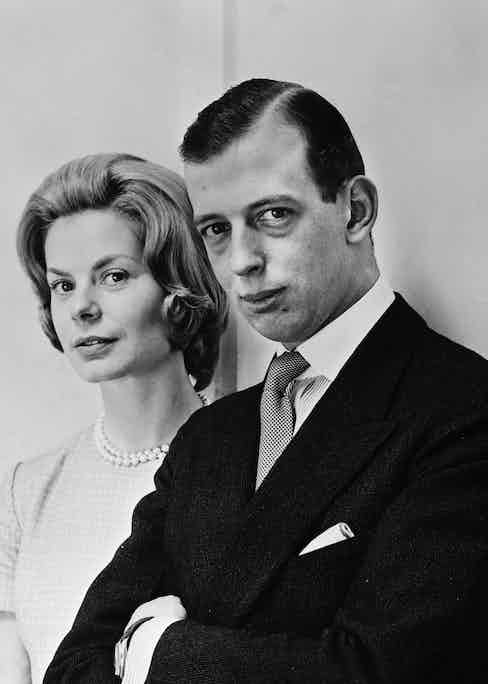 There were persistent rumours that George had a 19-year affair with the actor and composer Noël Coward. The British security services supposedly reported that Coward and George were seen parading the streets in London in drag and had once been arrested by police for suspected prostitution. Love letters from George to Coward were believed to have been stolen from Coward’s house in 1942, and another clutch of letters had to be bought back from a male prostitute in Paris who was blackmailing him. Additional gossip suggested that George dallied with his distant cousin Prince of Prussia Louis Ferdinand and with art historian and, later, Soviet spy Anthony Blunt.

Unsurprisingly, given his liking for the nightlife and the artistic milieu, dark-haired, blue-eyed George was a punctilious dresser. Even alongside a clotheshorse like his brother, the Prince of Wales, he held his own with a restrained style of dressing. Davies & Co. was the Princes’ first tailor and, predictably enough, Gieves & Hawkes made their naval attire. Huntsman was also patronised by the pair and their fast set, but George’s signature double-breasted suits were probably from Anderson & Sheppard, although he was certainly a client — Edward ‘Fruity’ Metcalfe, friend and confidant to the Prince of Wales, had introduced George to the firm on 1 November 1929, according to Anderson & Sheppard’s records.

George’s preference for a double-breasted style resulted in it being called ‘the Kent’, especially when seen in an evening suit. He was seen almost exclusively in a double-breasted suit with a long, rolled lapel and with the bottom button fastened. He favoured and popularised a neat English spread collar to his shirts — Hawes & Curtis was his major supplier — and usually wore a subtly patterned tie with a small, precise knot. And George’s slicked-down, side-parted hair was looked after by the venerable barber Geo. F. Trumper.

On the footage gathered on the website of the British Pathé newsreel company, the Duke of Kent was often seen in splendid full overcoats, again usually double-breasted. The only time he appeared in a single-breasted jacket was in his Royal Air Force (RAF) uniform. At the start of WWII, he rejoined the British Navy with the lofty rank of rear admiral, briefly serving in the intelligence division of the Admiralty, but he reportedly felt a sham in the service he disliked so much. Before the war, like his brother Edward, he had been a keen pilot. In April 1940, he transferred to the RAF and temporarily relinquished the rank of air vice-marshal (the equivalent of rear admiral) to assume the role of staff officer at the RAF Training Command with the rank of group captain. 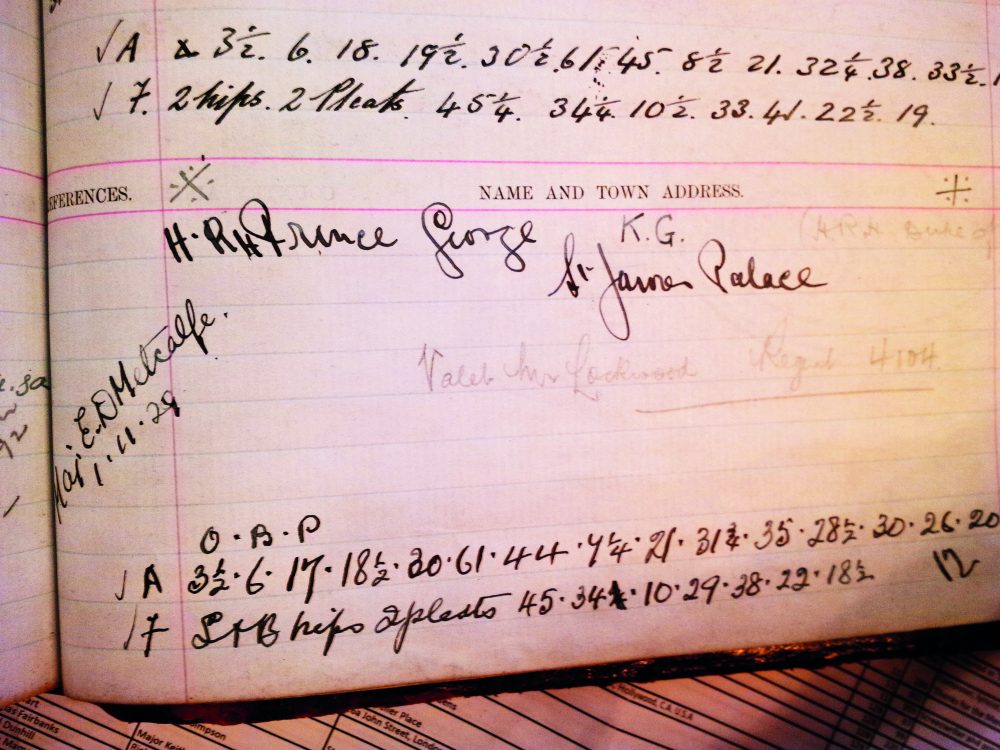 Anderson & Sheppard’s record of the Duke of Kent’s patronage 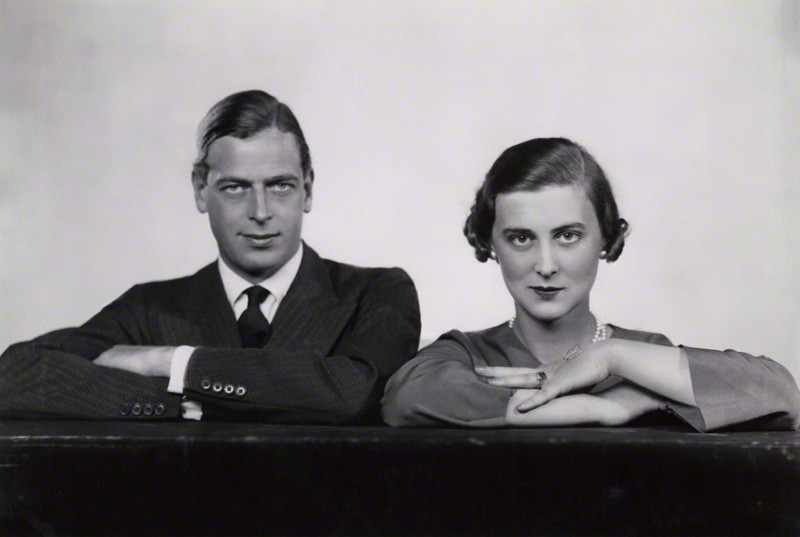 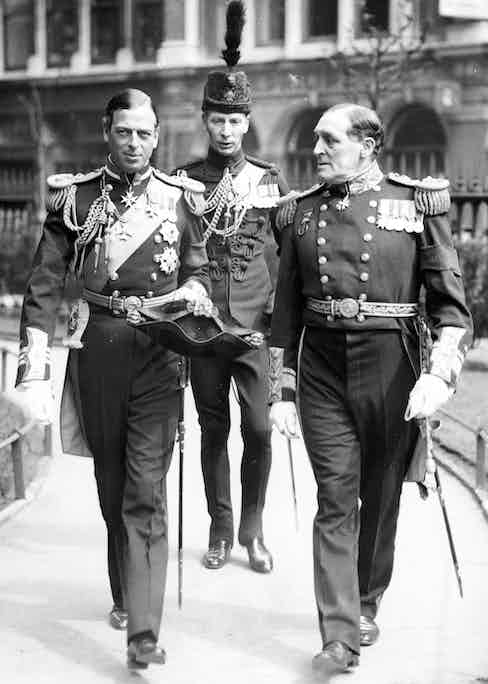 On 25 August 1942, four months short of his 40th birthday, the Duke of Kent was killed when the RAF S.25 Short Sunderland Mark III flying boat he was in crashed into a hillside near Dunbeath, Caithness, in the far north of Scotland. Reportedly heading to Iceland on a morale-boosting trip to see RAF airmen, he was one of 15 fatalities; only the rear gunner, Andrew Jack, survived. The very experienced lead pilot, Flight Lieutenant Frank Goyen, was blamed for the crash.

Conspiracy theorists have buzzed around this tragic mystery. They point to the fact that a normal flight plan from the starting point of Invergordon, a Scottish town, would have avoided land altogether. They also highlighted that not only had Goyen’s flight plan, filed before takeoff, disappeared, but also the papers of the secret court of inquiry.

Some have suggested that the Duke was at the controls. An unsubstantiated claim was that the plane was on a secret mission to Sweden to open misleading and fraudulent peace talks with the Germans. The most outlandish suggestion was that British intelligence, on the orders of Winston Churchill, caused the crash, as the wartime Prime Minister believed that George was a German sympathiser.

The Duke of Kent was buried in the Royal Burial Ground in the Frogmore Estate, directly behind Queen Victoria’s mausoleum. He left his widow Marina with three small children: Edward, who is the current Duke of Kent, and has the look of his father; Prince Michael of Kent, who has inherited George’s sense of style; and Princess Alexandra, who married businessman Angus Ogilvy. Oddly, the official papers relating to George, Duke of Kent, are still embargoed. And, aptly, a 2003 British documentary based on him was titled The Queen’s Lost Uncle.