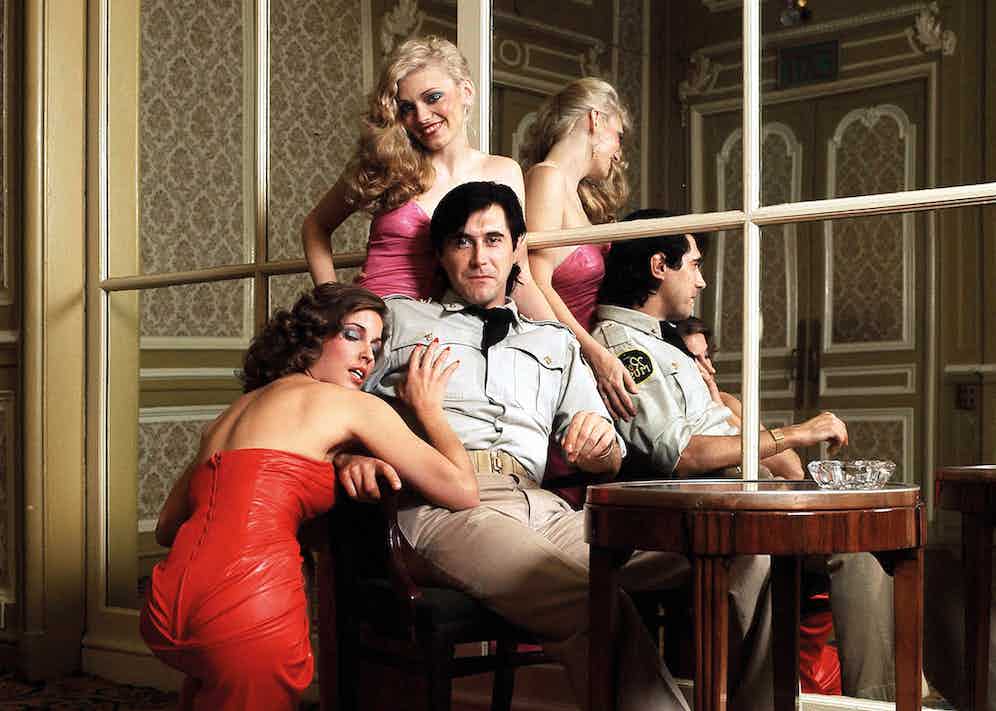 Even amongst the pantheon of musical frontmen, it’s fair to say that Bryan Ferry represents a masterclass in charisma. Across a career spanning half a century, he has come to embody a kind of vie de luxe. Crucially, from the very inception of his career, he has sought to use his music and it’s intersection with fashion and with art, to create a world his audience could escape to with him; a demi-monde where futurism, romanticism and sensuality collide. A ‘state of mind’, as he described it, for his audience to cohabit with him. Once asked how would he describe his average fan; Ferry quipped back “none of them are average, darling.” Your Stones et al have arguably ‘never stopped rocking’, but Ferry has truly written the book on maturing with eclat.

Ferry grew up in Washington, County Durham, his mother a factory worker and his father a ploughman. Although not initially interested in music, the young Ferry discovered jazz - Miles Davis, specifically - and the early American blues and rock and roll acts, such as Lead Belly and Howlin’ Wolf. These became foundational texts for his appreciation of music, and also signalled the beginning of what would become a defining trait: a magpie-like appreciation for new points of influence. Ferry also became friendly with the Teddy Boy gangs around his town, fitting them for suits while part-timing at a tailor’s shop.

After high school, and following a few short-lived stints in bands, Ferry enrolled in the Fine Arts department at the University of Newcastle in 1964. It was a particularly auspicious time to attend. For artist Richard Hamilton was part of the faculty, and through him Ferry was introduced to, and became enamoured with, the American pop art of Jasper Johns, Andy Warhol, Robert Rauschenberg and their contemporaries. Hamilton described his view of pop as ‘a mixture of reverence and cynicism’ - a philosophy that would prove influential to Ferry’s career several years later.

In 1970, after auditioning unsuccessfully to be the lead singer of (bizarrely, in hindsight) prog-rock band King Crimson, Ferry, along with his fellow art school students Andy Mackay and Brian Eno created Roxy Music. Roxy was expressly designed as an outlet that would combine their loves of music, art and fashion - the first truly multimedia band. Ferry saw music not as something to be divided into genres and approached with a kind of reverence, but rather as a palette of colours to be combined and recombined to create the endless new - pop music as pop art. Describing an early performance of ‘Remake/Remodel’ - their self-described manifesto - music critic Michael Bracewell said that “it seems almost as though, in fact, Roxy Music - as a group, and as an artistic activity - are in one way Ferry’s artistic alibi for carrying out another, less quantifiable creative act: that of turning oneself into a work of art.” 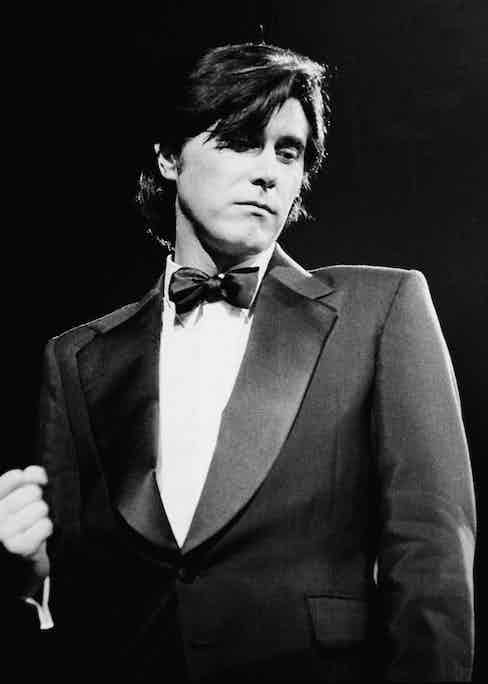 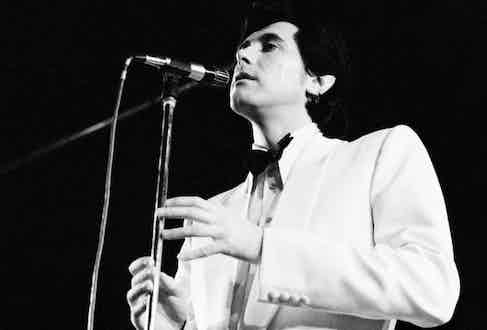 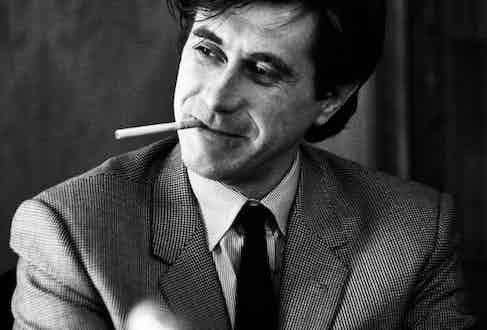 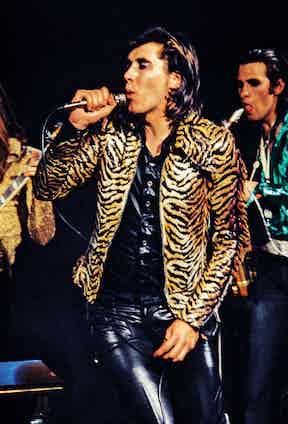 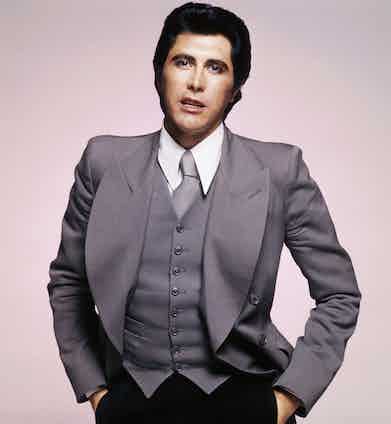 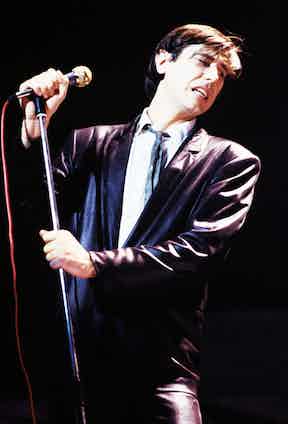 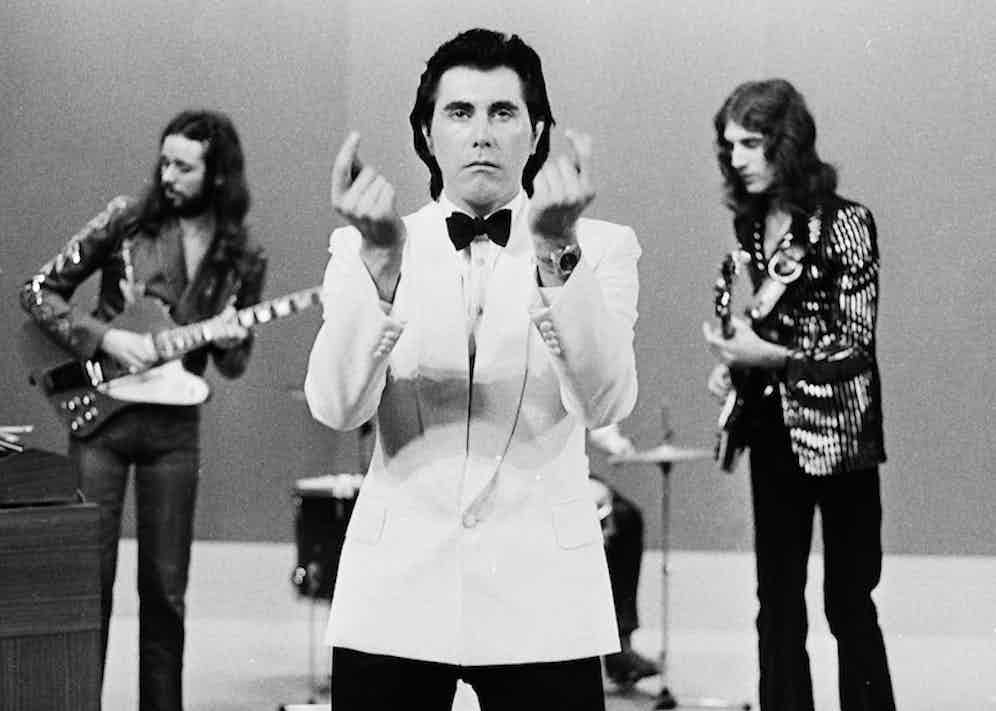 Roxy’s debut was warmly received by critics (“Does it work?” asked New Musical Express, in typically breathless fashion. “Impeccably!”), and the group went on to create a string of successful albums, including For Your Pleasure(which Morrissey himself described as “the one truly great British album”), Country Lifeand Stranded. Ferry himself also managed to launch a successful solo career, one which he would, in some triumph of time management, continue to pursue in parallel for the rest of Roxy’s existence. He would eventually record some of the most successful songs of his career as a solo artist in the mid-1980s.

Ferry’s love of suiting started early, during his days working at the tailor’s shop, and as his style evolved during his art-school days and, later, his music career, the concept of ‘getting dressed up’ came to define his aesthetic. “After all” he once asked, “why should I spoil my mood by wearing an ugly suit?” So the suit became the lynchpin of his onstage persona, buoyed by iconic, ostentatious tailoring by the likes of Anthony Price. Indeed, Ferry remains perhaps the best argument yet for a white tuxedo.

Despite claiming that women were ‘a complete mystery’ to him, Ferry’s reputation as one of music’s foremost Casanovas is well-earned. Many of the models that graced Roxy record sleeves were paramours of his, notably For Your Pleasure’s cover star Amanda Lear, who later went on to have a year-long affair with David Bowie, and Jerry Hall, who featured on 1975’s Siren. Legend has it Hall’s body paint from the cover shoot was proving difficult to wash off - Ferry offered to take her back to his house and ‘assist’. Hall famously left Ferry for, of course, Mick Jagger in 1977; their split forming the basis of his bleak solo album The Bride Stripped Barethe following year.

In 1982 he married Lucy Helmore, once again a Roxy cover star, this time for their swansong Avalon, which was released the same year. By this time Ferry was heavily dependant on cocaine; he credits Helmore with helping him kick his habit during their marriage. They had four children before separating in 2001, including son Merlin, who played regularly as part of Ferry’s backing band before tragically losing the use of one hand in a car crash in 2015.

He’s proved admirably resilient as an artist as well, even now producing strong material and consistently looking to broaden his palette, whether it’s with familiar collaborators like Nile Rodgers and Johnny Marr, or young blood like disco ingenue Todd Terje. And for one recently turned seventy, his ability to beguile is still beyond repute (indeed, the author can attest to witnessing security prise amorous female fans off of Ferry this very year). As Ferry himself has said of his life, “I've had quite a few moments I've liked, so it's good enough.” 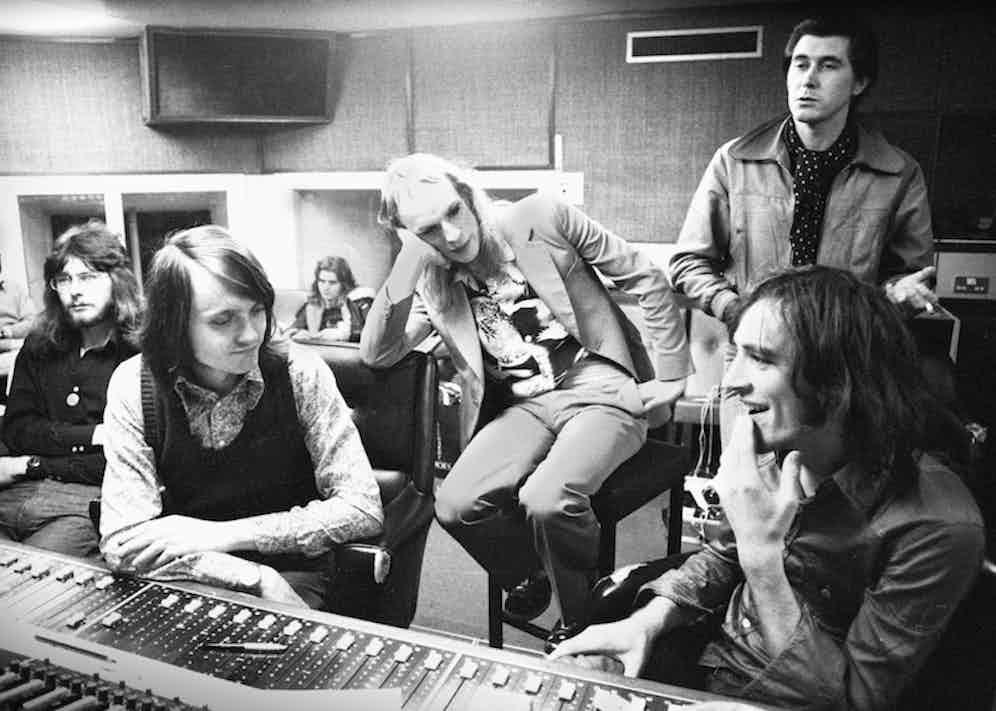