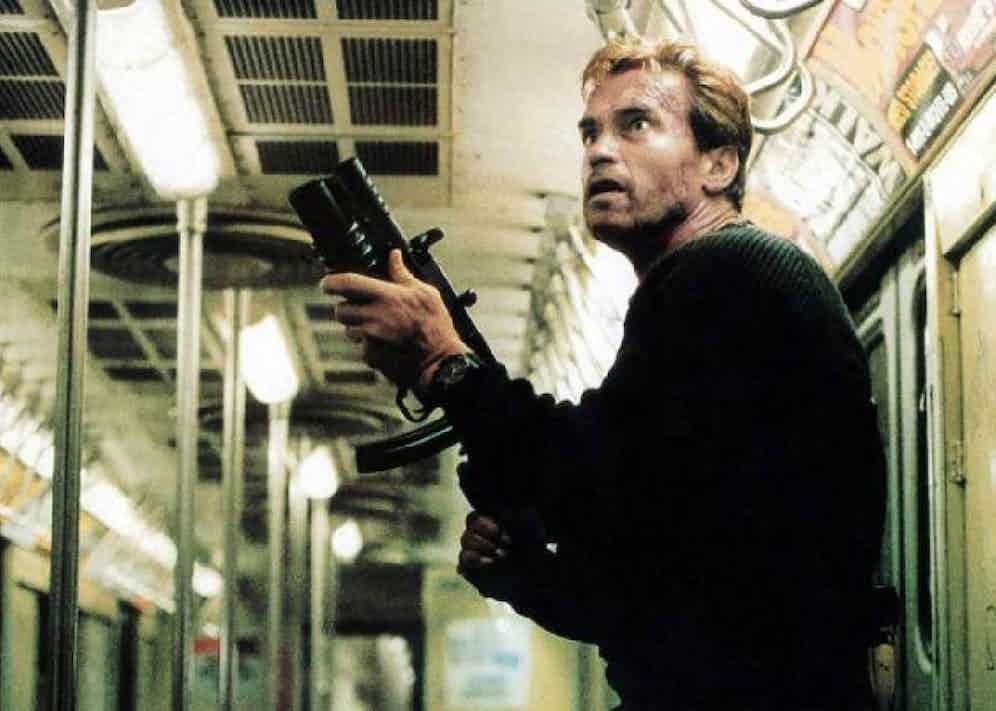 When it was first released in 1993, the Royal Oak Offshore was called The Beast. A bold and seemingly brutish take on its famous older sibling, the Offshore seemed destined to live up to its name. But it didn’t take long for people to find beauty in the beast. By the 2000s the Offshore had found its place in the world — comfortably strapped onto the wrists of superstars like Schwarzenegger and rap superstars like Jay-Z.

In the Offshore, Audemars Piguet found they had a perfectly versatile platform for experimentation and collaboration, and very quickly we started seeing limited edition Offshores linked to everything from movies (End of Days), boy bands (N*Sync), motorsports and more. Here’s the larger than life rise to success of the mighty Audemars Piguet Royal Oak Offshore. 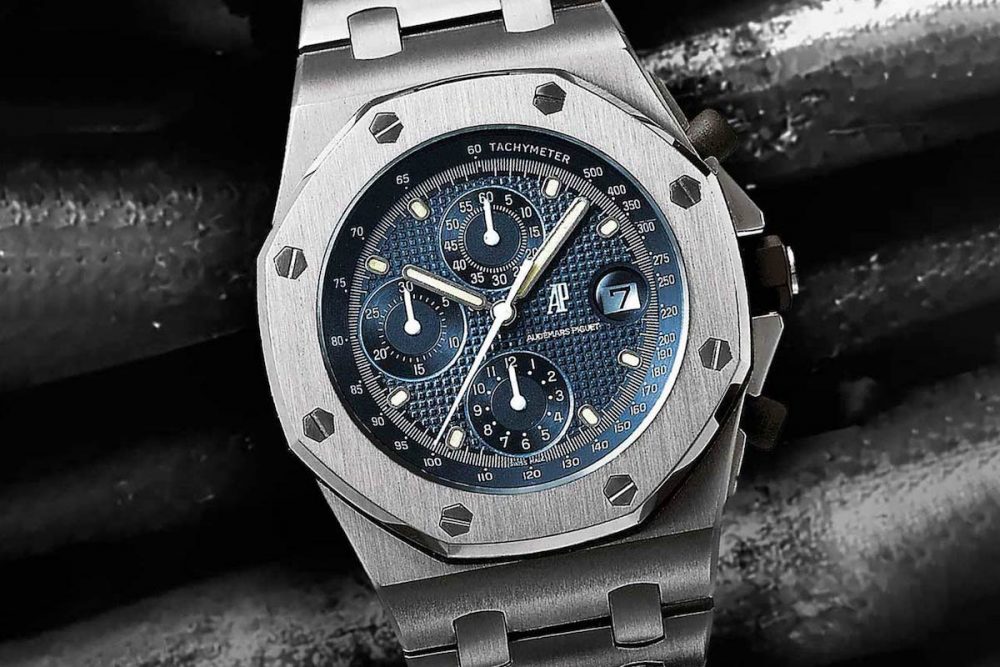 The Royal Oak Offshore broke through the size barrier with its 42mm case in 1993, establishing an unheard-of precedent for large-sized watches. Coming with the blue dial to echo the original Royal Oak, it was the first of the Offshore line.

It is impossible to discuss the modern day icon that is the Royal Oak Offshore without first detailing the genesis of the original 1972 Royal Oak, famously created by designer Gerald Genta. There are two stories about how he came up with the idea of the unique eight-sided bezel and tripartite construction of this timepiece. The first was that he was inspired by the octagonal portholes of the HMS Royal Oak, the British Navy’s first armored vessel, and decided to base the bezel on this design. This was later corrected in Revolution magazine’s interview with AP CEO Francois Bennahmias who explained, “Mr Genta’s widow told me that Gerald was inspired by a diver he saw by the side of lake Geneva, specifically the way his diving helmet was screwed to his suit.”

Regardless of which story you connect with the Royal Oak’s eight-sided bezel and exposed screw design, it has become one of the most recognizable in modern luxury. Says Bennahmias, “The thing about the Royal Oak is it is unmistakable from across the room.” But underlying the aesthetics was a function — the construction of the Royal Oak case was such that both the screws and the bezel are integral elements to the case structure. The entire watch was sealed from the back using flat nuts that were attached to the screws that run through the case — like load-bearing pillars in a house. 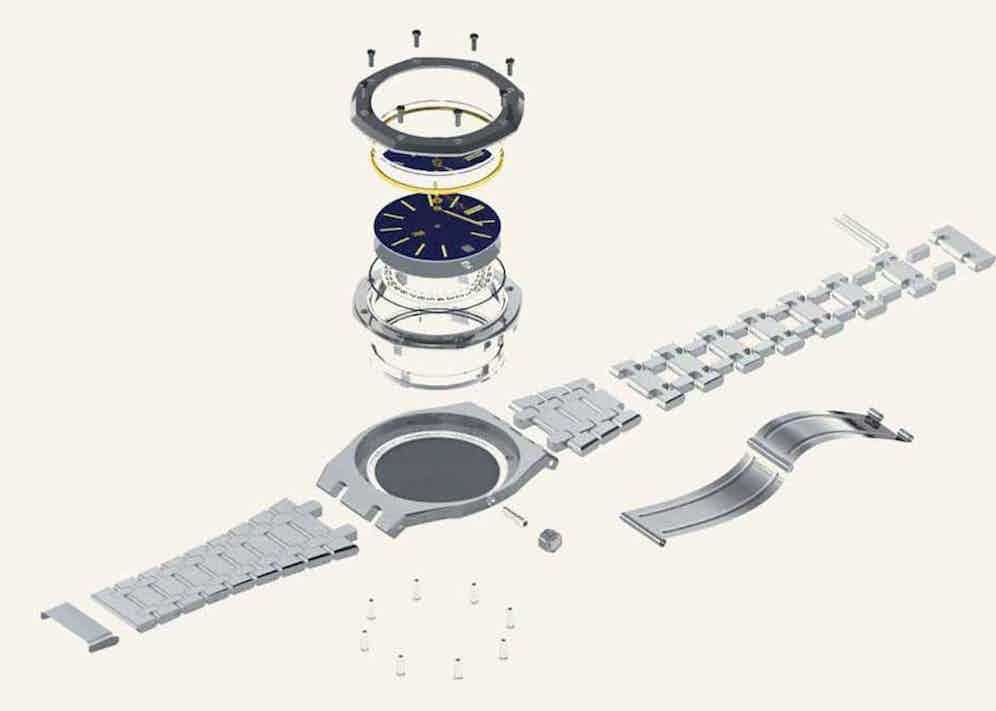 The Royal Oak ignited a revolution as the first super high luxury steel watch and at the time of its launch, its 3750 franc asking price could buy you 12 Rolex submariners. It was clearly meant for a specific type of customer. As former Audemars Piguet CEO Georges Henri Meylan explains: “The Royal Oak was intended to reach out to a new generation of (very rich) young watch buyers.

The idea of a massive oversized 42-mm in diameter Royal Oak-based watch was sparked in the mind of designer Emmanuel Gueit sometime in the mid-1980s. Working at Audemars Piguet’s design studio, he launched himself into this project with unbridled obsessive enthusiasm. What he created would be a first in luxury watches. At this time, Panerai’s 42-mm in diameter Luminor Marina had not yet been introduced to the market. Thus Gueit’s creation was the first truly oversized luxury timepiece. Even crazier were its exposed rubber gaskets and rubber-covered chronograph pushers, normally considered incompatible with a refined watch.

For its movement, Audemars Piguet selected two products from brands they had long associations with — Jaeger-LeCoultre (at the time Audemars Piguet still owned a large part of the Le Sentier manufacture) and the famous Vallée de Joux module maker, Dubois-Depraz. A nicely reworked Jaeger-LeCoultre automatic caliber and a Dubois Depraz module formed the chronograph movement for the Offshore. The signature magnifying loupe used to enlarge the recessed date of the Offshore results from the movement’s modular construction. Says Gueit, “The dial was really far from the date wheel. So I decided to use the loupe to magnify the date. It’s funny because this has become one of the visual signatures of the watch.” 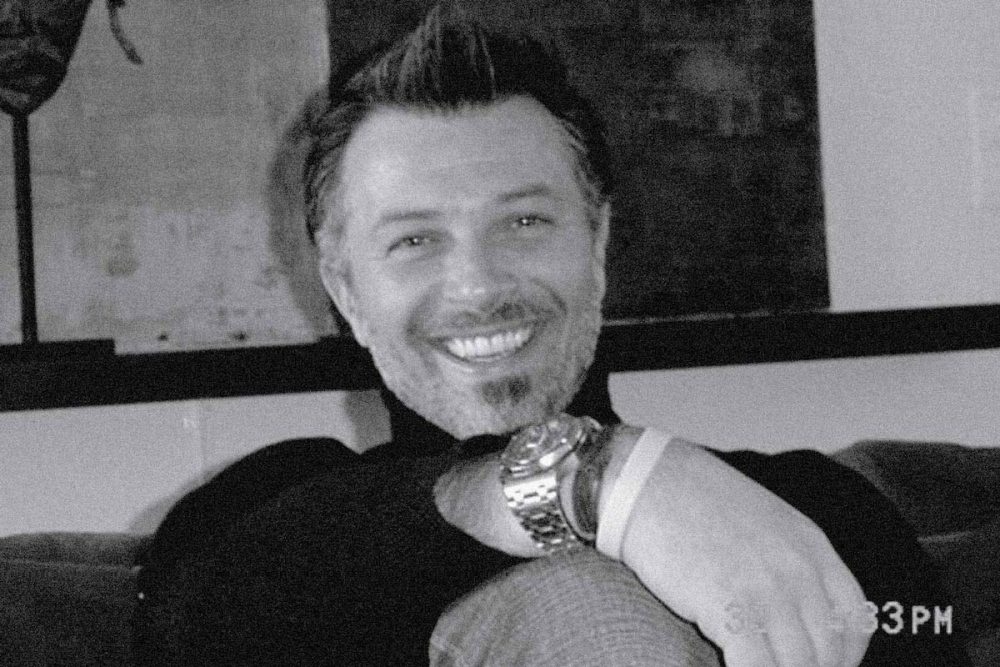 Much controversy was unleashed at the then-unheard-of 42mm diameter of this stainless-steel behemoth when it was released in 1993, and Gérald Genta himself — the father of the original Royal Oak — was said to have burst into the AP stand at BaselWorld, denouncing the Offshore as having ruined his original design.

Today, the Offshore could not be more different, or varied, and the spirit has evolved to embrace myriad forms. The first models in stainless steel, gold and platinum, have given way to ever-more-exotic materials, with titanium, carbon, ceramic, cermets and even rubber versions on offer. We believe that there are many iterations of the Royal Oak Offshore which are under the radar in the collecting community, this is why we are happy to bring a selection of limited edition Offshores which have the potential to become future collectibles. 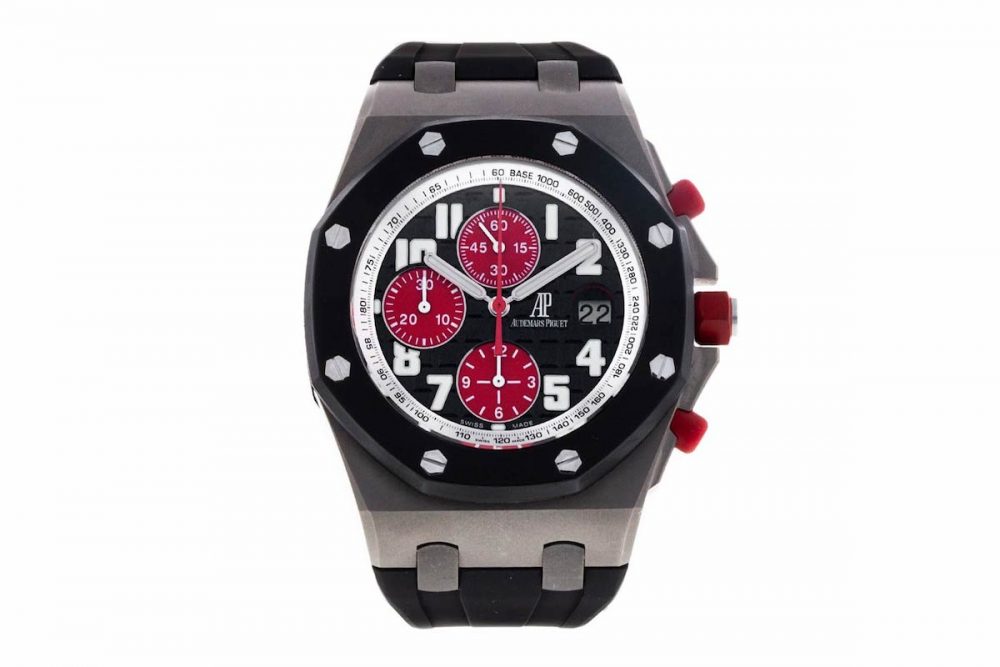 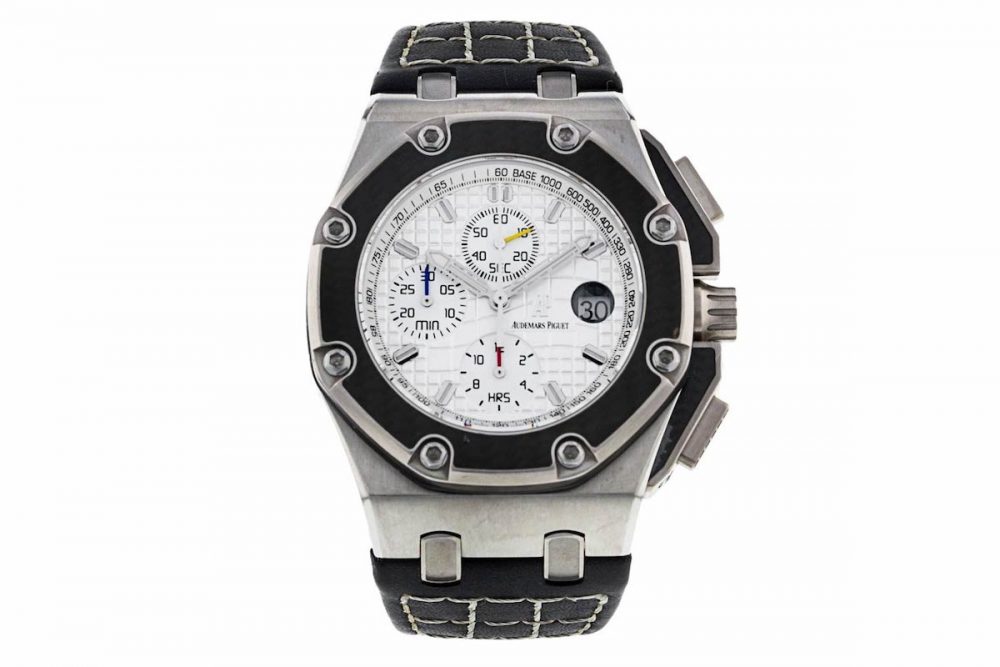 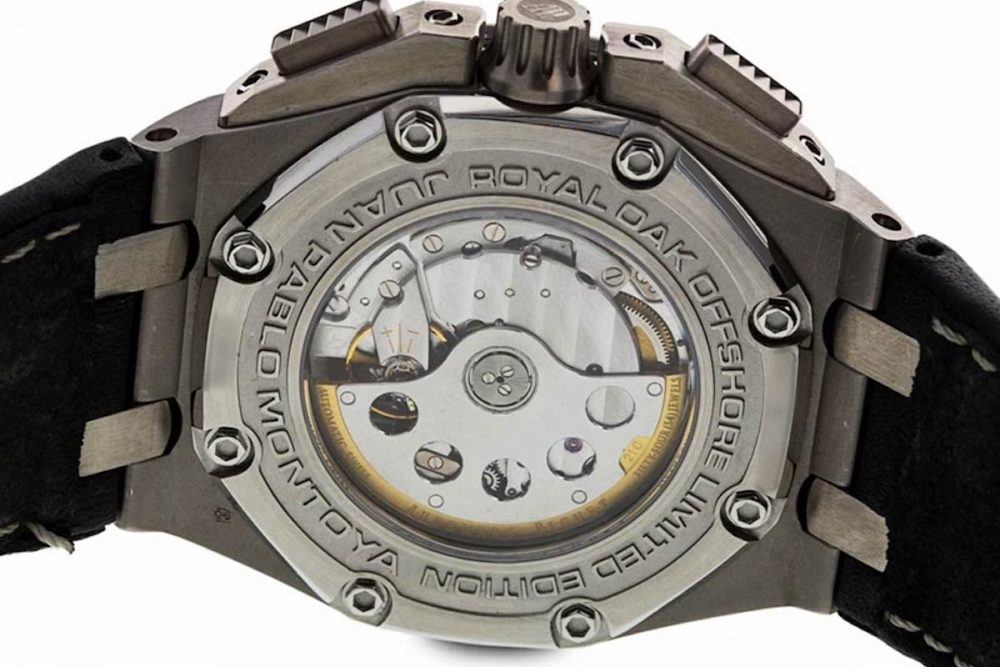 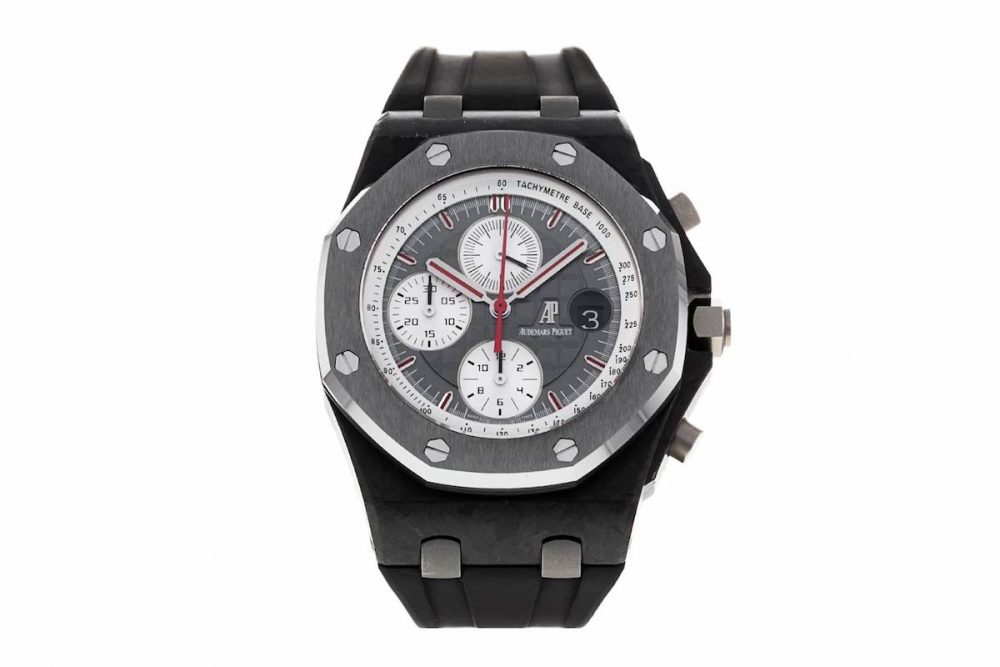