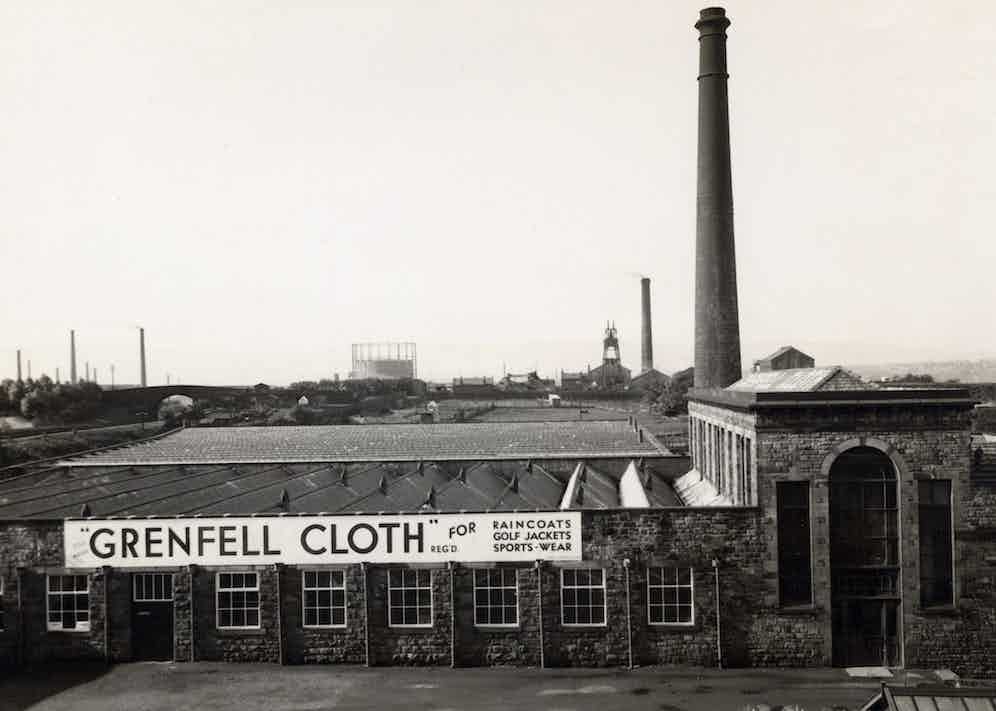 In 1892, Dr. Wilfred Grenfell travelled to Labrador on the Newfoundland coast, Canada, where he witnessed the appalling living conditions that the local people were subjected to. “The poverty, ignorance and semi-starvation among English speaking people of our own race,” he once said, prompted him to devote his entire life to improving the livelihood of the inhabitants of Labrador. A philanthropist, medical missionary, humanitarian and explorer, he was a formidable man who helped build the first schools, agricultural centers, libraries, hospitals, orphanages, cooperatives and much more on the Newfoundland coast, going far beyond his call of duty. He was fittingly awarded a knighthood in 1927.

Grenfell spent the majority of his career in Canada but he returned to England in 1922. A prolific orator, he toured the country and lectured in cities to raise awareness of the plight of the inhabitants of the Newfoundland coast. One requirement that he sought help in was appropriate clothing. In Burnley’s Town Hall, Lancashire, Grenfell spoke about the difficulty in finding the right cloth to function in the incredibly harsh and inhospitable climate. He said: “The right cloth for the Labrador mission workers should be light. It should also be strong, for once on the trail, the wearer's life might well depend on it. It should be weatherproof, to turn both rain and snow, and windproof to retain the wearer's warmth. Above all, it must allow the body moisture to escape.”

Grenfell’s words resonated with Walter Haythornthwaite, whose family owned a cotton weaving mill just north of Burnley that specialised in linings, rather than cloth that was fit for the great outdoors. Haythornthwaite went to work and experimented with great difficulty as the looms had to be specially strengthened and it was near impossible to inject dye into the fabric due to its density. Eventually, though, he succeeded and produced a cloth that met Grenfell’s requirements. 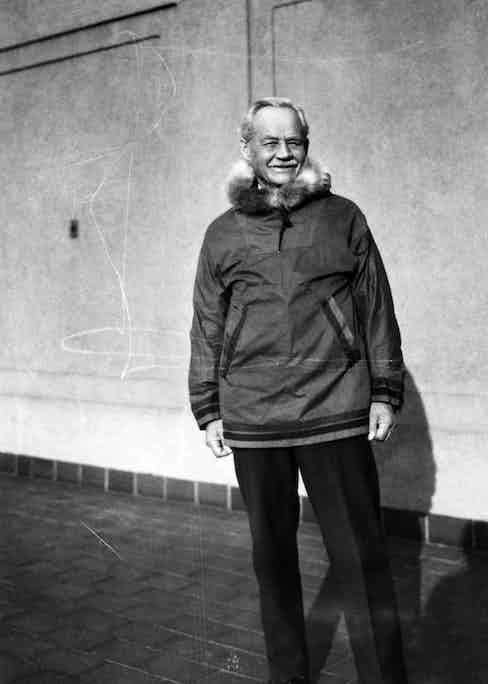 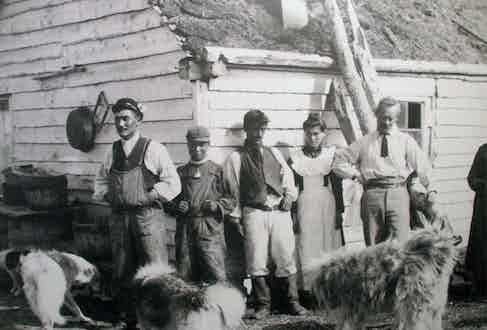 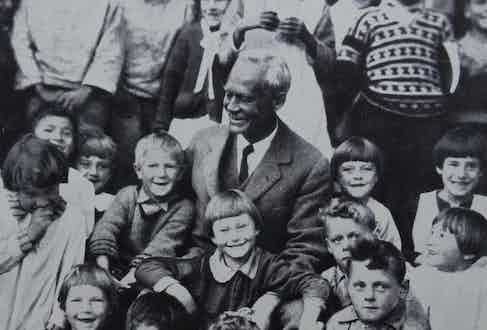 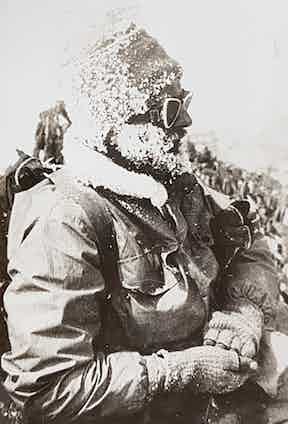 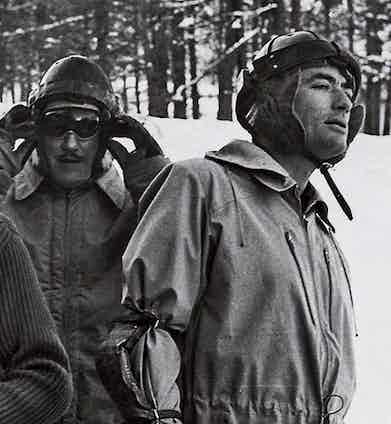 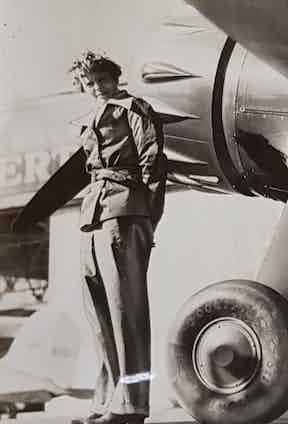 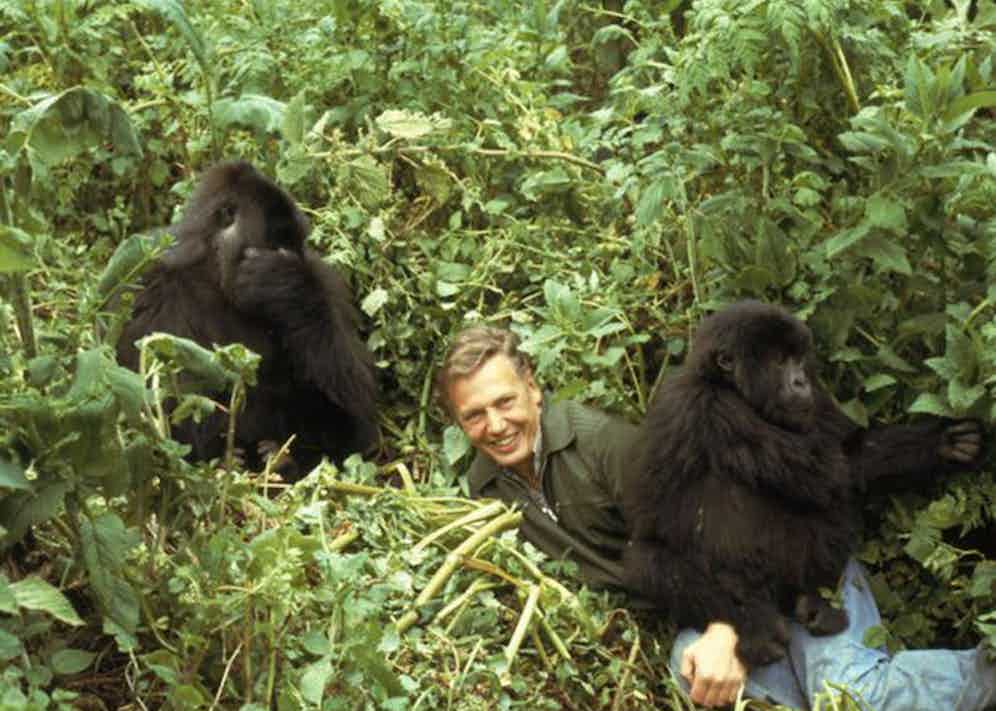 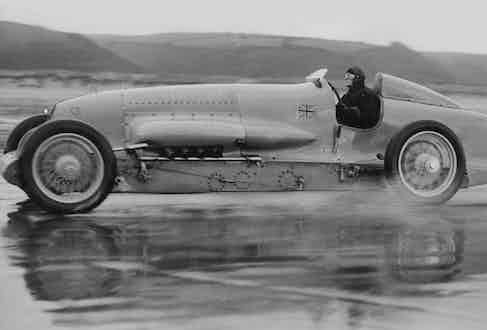 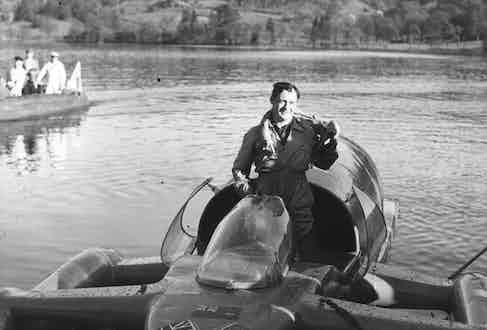 At the time, the cloth was fabric innovation at its finest. It was formed using long staple Egyptian cotton that was tightly spun to 600 threads per linear inch both in the warp and weft. Still in production today, it’s incredibly robust and repels water and wind effortlessly, making it ideal for arduous exploits on the frozen wastes of Labrador. Most of all, it’s breathable, which is the essential quality that Grenfell made clear that day in Burnley.

A year later Haythornthwaite shipped the cloth to Grenfell, who by this time was back on the Newfoundland coast. Thrilled with the outcome, he wrote back to Haythornthwaite to express his delight, saying: “It is light, durable and very fine looking. It really has been a boon to us all and I think the public should know of it. They will be grateful, I know. We use it constantly on the ships, planes, sledges and for motoring. It does not wear out and we cannot afford to take chances, much less dare." With Grenfell’s approval, it was marketed in his name and Grenfell Cloth was officially born. He later stressed that the cloth should be made available to any outfitters that wished to use it and it wasn’t until the 1940s that Grenfell starting producing its own outerwear offering.

Since its inception in 1923, there are numerous ways that Grenfell Cloth has been used. “It’s a multi-purpose cloth that been used in such diverse ways,” says Gary Burnand, Commercial Director of Grenfell. In the 1930s it was used for mountaineering purposes by Eric Shipton but also to cover F.S. Smythe’s tent on Mount Everest, and thus formed at that point in time “the highest habitation that man has ever built on this planet,” says Burnand. The racing driver extraordinaire, Sir Malcolm Campbell, and his son Donald, regularly wore racing suits made from Grenfell Cloth when they were breaking speed records on land and sea left right and centre in the 1920s and ‘30s. Malcolm once wrote to the brand and said: “With reference to the Grenfell Cloth, I am simply delighted with the racing suit that you made for me and also the cap. It is by far the most comfortable racing suit that I have ever used and one of the most remarkable things is that it never makes you feel hot.” 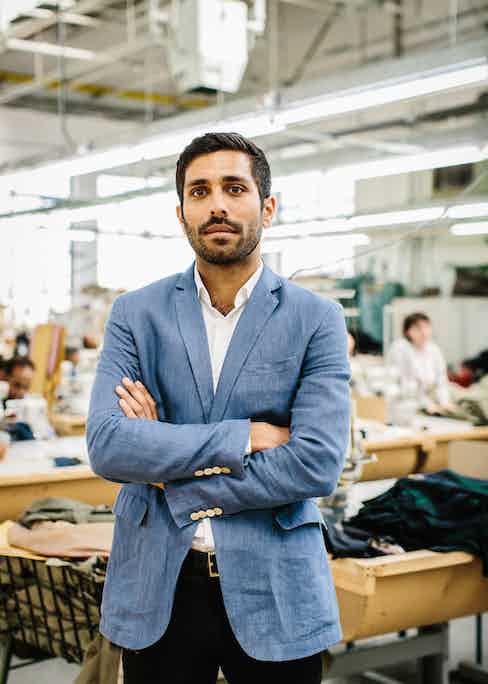 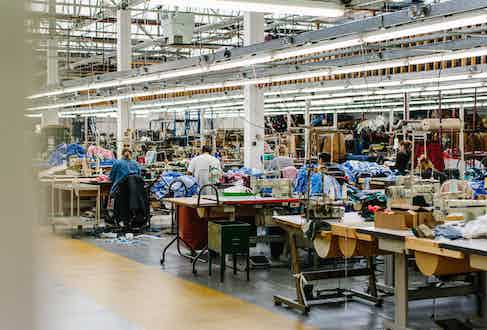 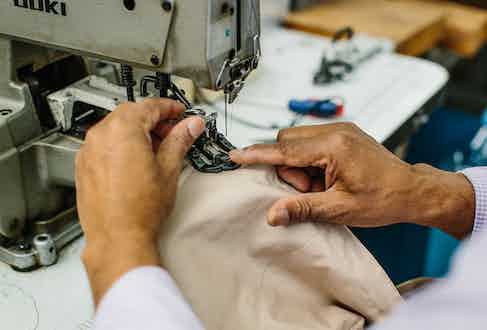 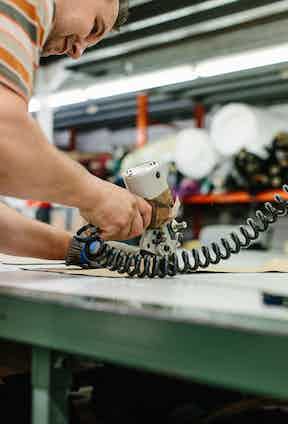 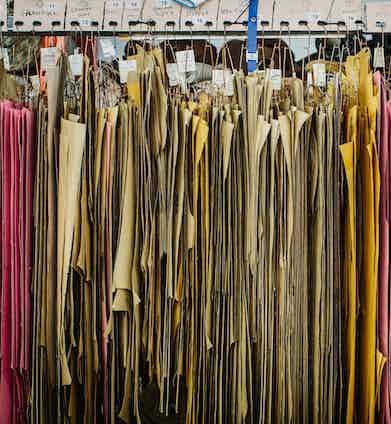 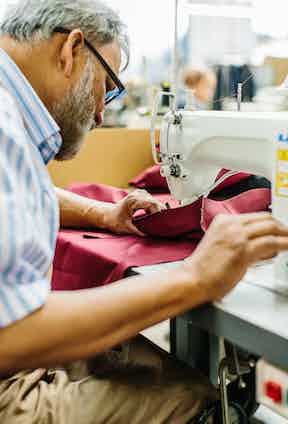 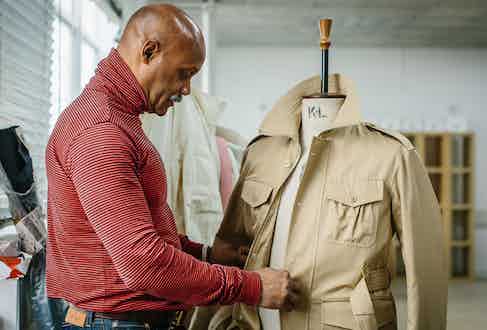 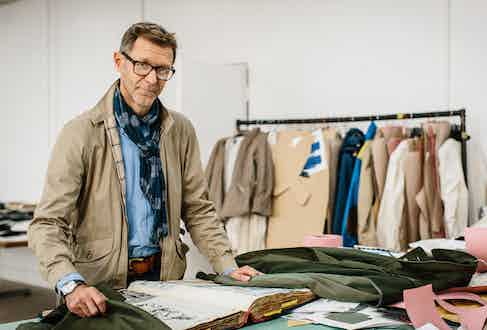 Whilst Grenfell is infinitely tied to record-breaking achievements on land, it’s also been part of records broken in the air. The pioneering aviator Amy Johnson, who was the first female pilot to fly alone from Britain to Australia, wore a flying suit made from Grenfell Cloth in the 1930s and its capability of allowing moisture and heat to permeate through the cloth was crucial. Sir Winston Churchill “wore Grenfell when inspecting Spitfire planes during World War II,” adds Burnand. Towards the tail end of the Classic Hollywood period, Gregory Peck and Cary Grant both wore Grenfell jackets for filming and leisurely purposes. A decade later, Sir David Attenborough famously wore a Grenfell Walker jacket in Rwanda whilst surrounded by gorillas.

Today, Grenfell operates out of east London in a reasonably sized factory. Underneath one roof it produces a range of outerwear fit for many occasions, whether for sartorial or sporting purposes, countryside walks or to wear on a motorbike. Sourcing luxurious outerwear that’s made in Britain is increasingly rare, and Grenfell is perhaps the most exciting brand of them all.

Grenfell takes inspiration from its fantastic archive, consisting of humorous advertisements and tattered old pieces, and creates contemporary clothing that retains the characteristic traits embodied by Sir Wilfred Grenfell. They’re utterly dependable, multi-functional, versatile and made with real integrity – there’s no doubt that the great man would be thoroughly pleased with his namesake’s current offering. 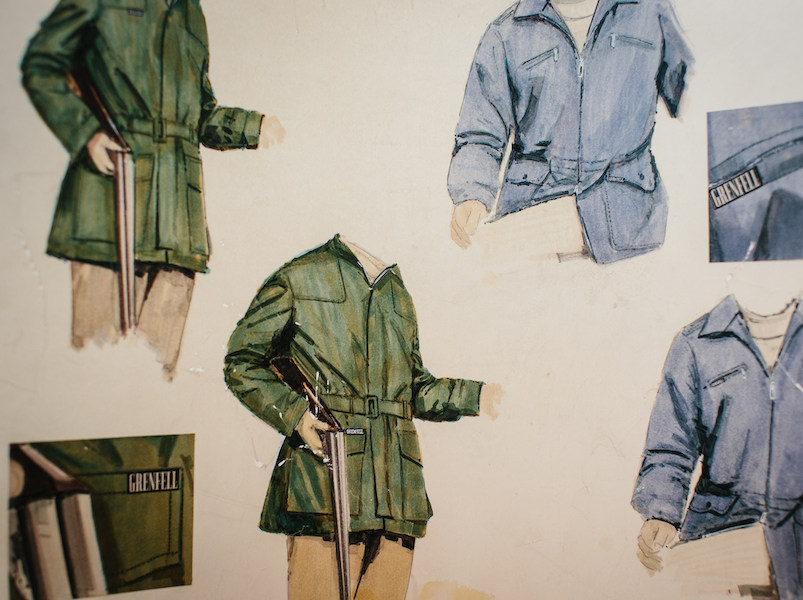