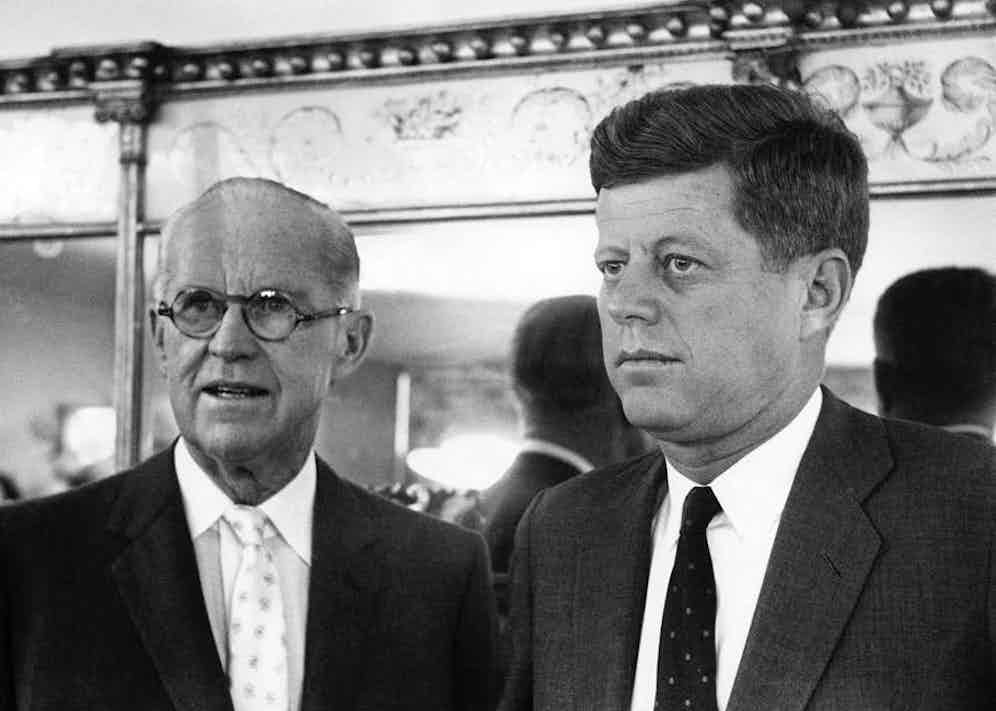 Joseph Kennedy Sr’s father Patrick was the quintessential American rags-to-riches success story, parlaying savings from work as a stevedore into the ownership of a saloon, then another and another and another, rolling the profits into a whisky importation business, holdings in coal mining and banking, and a political career as a state senator and Democratic party power broker. Raised in privilege, enjoying the fruits of his father’s entrepreneurialism, Joe Kennedy was certainly no self-made man.

Numerous credible contemporary sources suggest that Joe bootlegged, insider-traded, defrauded and stock-manipulated his way to becoming one of America’s richest and most powerful individuals. Key among them, mid-century American mob supremo Sam ‘Mooney’ Giancana, who called Joe Kennedy “one of the biggest crooks who ever lived.” According to ‘Double Cross’, the biography of Giancana written by his brother Chuck and nephew Sam, the paterfamilias of one of the 20th century’s most famous political dynasties was the Cosa Nostra-approved boss of Boston’s illicit liquor network during Prohibition, a protégé of mafioso Frank Costello.

“(Joe) Kennedy’s ties to the underworld intersected at a hundred points,” the book relates. “Besides making a fortune in bootlegging, Kennedy had made a financial killing in Hollywood in the twenties — with the help of persuasive behind-the-scenes New York and Chicago muscle. When Prohibition came to a close, as part of a national agreement between the various bootleggers, Kennedy held onto three of the most lucrative booze distributorships in the country — Gordon’s gin, Dewar’s and Haig & Haig — through his company, Somerset Imports.”

No mere whisky-slanging ‘street’ gangster, the Harvard-educated Kennedy was also a prolific white-collar criminal. “According to Mooney, Joe Kennedy — along with such industrialists as General Motors founder William Crapo Durant, and John David Rockefeller, Jr. — had been given prior knowledge of the coming stock market crash in 1929.” Giancana went so far as to say of the cabal’s involvement in the crash, “They made it happen. They figured out how they could get even richer. Shit, old man Kennedy made over a million bucks sellin’ the market short before it fell. They manipulated the whole fuckin’ thing.”

Amusingly, Kennedy, the king of the dodgy stock pump’n’dump and insider short, was tasked by President Franklin Roosevelt (whom the Giancana book charges received millions in campaign funding from the mob via Kennedy and others) with chairing the new Securities and Exchange Commission — where, as a clued-up ‘poacher turned gamekeeper’, he proved highly successful policing the very same practices he’d built a gigantic fortune upon just a few years beforehand. 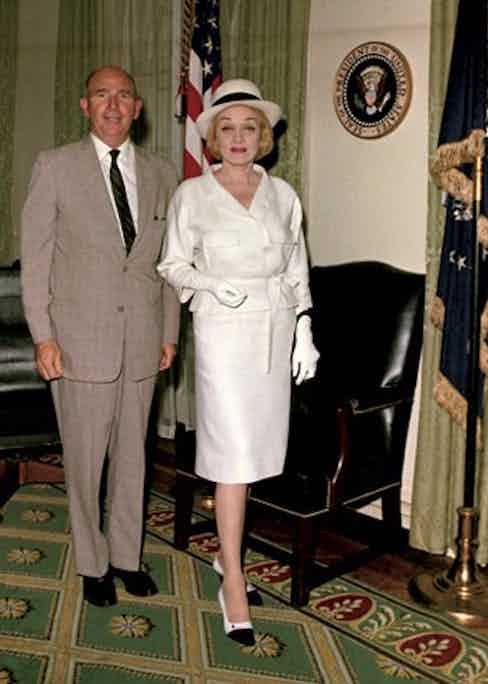 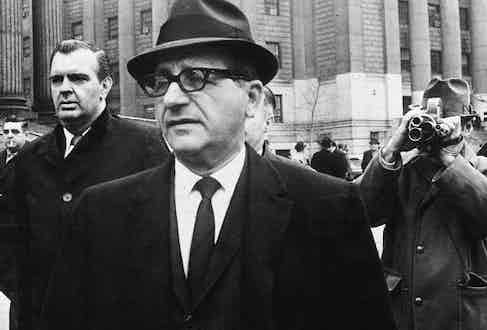 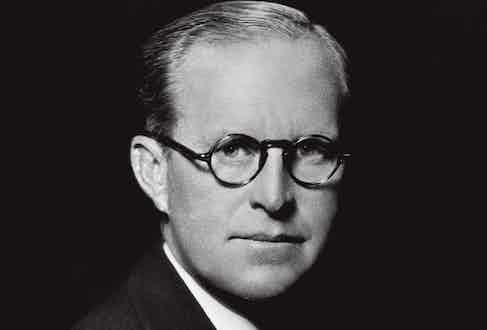 FDR subsequently rewarded Kennedy’s support with a prestigious posting as Ambassador to the Court of St James. The American tycoon and his family were initially received with great warmth and fanfare in London society. However, Kennedy’s open advocacy of appeasing the Nazis (he was a brazen anti-Semite), steadfast isolationist opposition to America getting involved in the war, and when the Blitz began, his weasely retreat to the English countryside — where he reportedly continued to trade on insider knowledge of the conflict’s progress to grow his financial holdings — soon made him a pariah among Britons, described by a senior Foreign Office figure as “a very foul specimen of double-crosser and defeatist (who) thinks only of lining his own pocket”.

When it was revealed that his confidential communiques to the president had been leaked en masse to Germany, Kennedy was hustled home to Boston, his hopes of succeeding FDR to the presidency in ruins. These lofty ambitions he’d transfer onto his eldest son, Joseph Jr — who was unfortunately shot down over Britain when the United States did, much to Joe Sr’s chagrin, enter the war. Thus it fell to the next Kennedy scion in line, John, to fulfill his father’s aspirations.

JFK had returned from the Second World War’s Pacific theatre a hero, which along with his charm, way with words, dapper dressing and good looks, made him particularly well placed for a career in politics. As did his father’s near limitless funds, Democratic party backroom leverage… and longstanding mob connections, which Joe is said to have used to the full to grease palms, kick ass, win the union vote, swing JFK’s senate seat, and subsequently, the presidency. The Giancana biography states that Joe promised the mobster, when JFK became president, “He’ll be your man. I swear to that. My son, the President of the United States… He won’t refuse you, ever. You have my word.”

"The Kennedy wives, Rose and Jackie, knew their fellas weren’t to be trusted. Giancana eventually, angrily, came to the same conclusion."

Of course, Joseph and John F Kennedy weren’t the most faithful of men. They each cheated prodigiously on their wives: Joe with a succession of women including Gloria Swanson, Marlene Dietrich and Clare Boothe Luce; John with a string of gals, the most in/famous among them his dad’s former paramour Dietrich, Marilyn Monroe, and Judith Campbell Exner — also the mistress of aformentioned mobster Sam Giancana. The Kennedy wives, Rose and Jackie, knew their fellas weren’t to be trusted. Giancana eventually, angrily, came to the same conclusion.

Though Joe had promised that JFK’s administration would go easy on the Cosa Nostra, the opposite turned out to be the case, with attorney general Bobby Kennedy only ramping up his crusade against organised crime after his brother took office. (Giancana began to get the idea that Joe, “the wily old bastard”, had set his boy on a mission to “destroy all those to whom the Kennedys owed favours.”) JFK failed to whack Castro, half-assed the Bay of Pigs invasion, and the mob never got their lucrative Cuban holdings back. The Kennedys weren’t taking calls from former close ‘friends of ours’. Even Sinatra, JFK’s most glamorous supporter (who also happened to act as a go-between with the mob), was suddenly persona no grata, cast out of the White House into the wilderness.

“That mick cocksucker,” Giancana fumed. “My millions were good enough for ’em, weren’t they? The votes I muscled for ’em were good enough to get Jack elected… Well, I’m gonna send them a message they’ll never forget.”

You probably know how the story ends.