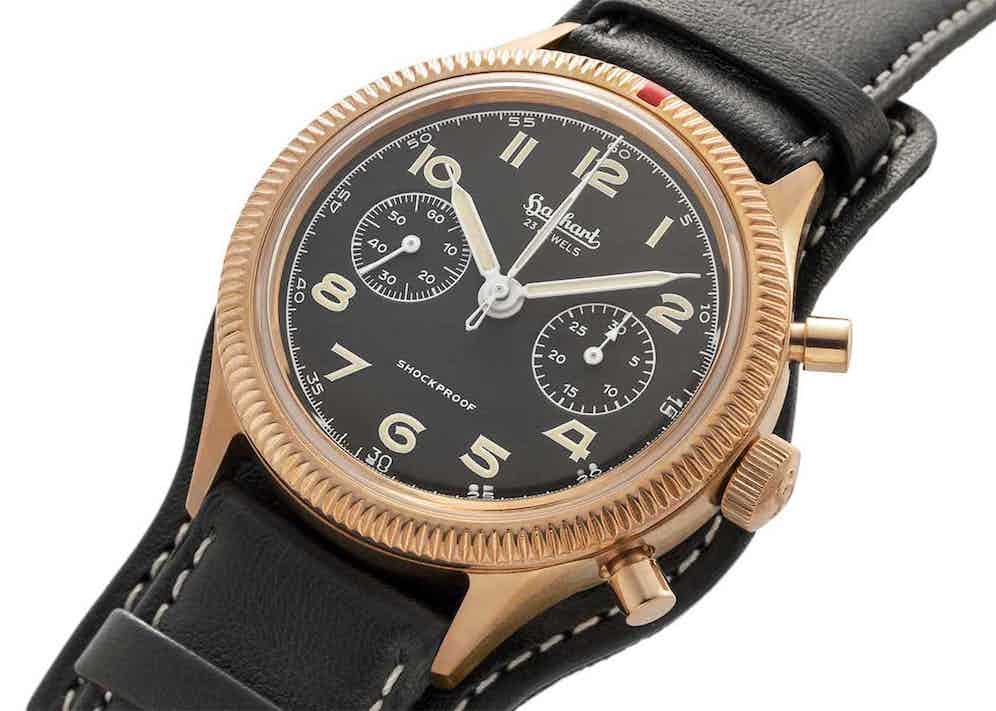 “Dude, I want Steve McQueen’s other watch!” was my exclamation upon meeting Hanhart’s co- managing director Felix Wallner at the 2017 Basel Fair. He immediately chuckled in amusement and replied, “Wei, everybody wants Steve McQueen’s watch. We have hundreds of requests each month to recreate the 417 Flieger Chronograph.”

OK, just in case you’re not sure what exact timepiece Wallner and I were losing our collective minds about, let me clarify. Steve McQueen is correctly identified with two other watches, in particular, the iconic TAG Heuer Monaco 1133 B, which was on his wrist during his 1971 film Le Mans in an on screen partnership that continues to be one of the most evocative even to this day.

Then there is the Rolex 5513 Submariner, which he was photographed with, most famously, by legendary paparazzo Ron Galella. This watch is prominently featured on McQueen’s wrist as he drinks a cup of coffee with a surly expression aimed at the uninvited photographer, while on location for Papillon. Apparently, his words to Galella upon seeing him arrive at principal photography in Negril, Jamaica were, “I’ll give you five minutes on the condition you take the first boat out of here.”

McQueen’s third most conspicuous watch — he also owned a Cartier Tank and a LeCoultre Memovox — was the one he wore engaged in his favorite activity beyond being the unassailable “King of Cool”, and that was while riding his motorcycles. The watch that he religiously wore when astride one of his bikes and very frequently off them, was his Hanhart 417 ES Chronograph. 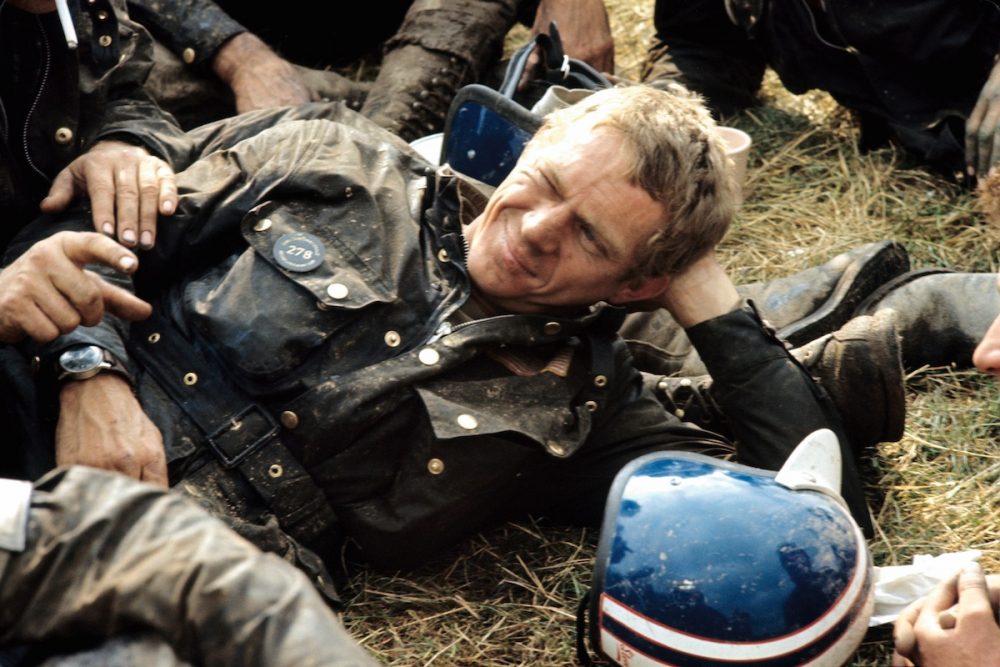 Steve McQueen after his run out on the 1964 IDST track. Each evening after the race (300km on average, on terrible paths), the paths, the runners used to collapse on the grass, covered in mud and oil. On his wrist is visible is the Hanhart 417 ES (Photo by Garcon Gragnon / Paris Match via Getty Images) 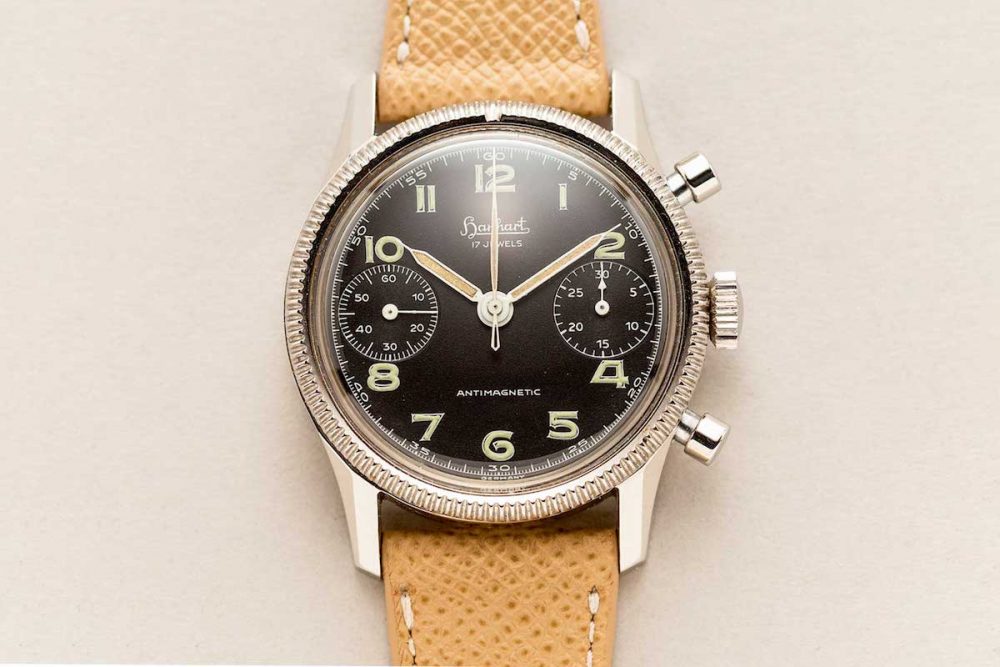 An instance of the Hanhart 417 ES, made between 1956 and 1958. Only 500 pieces with the designation ES for Stainless Steel (Image shucktheoyster.com) 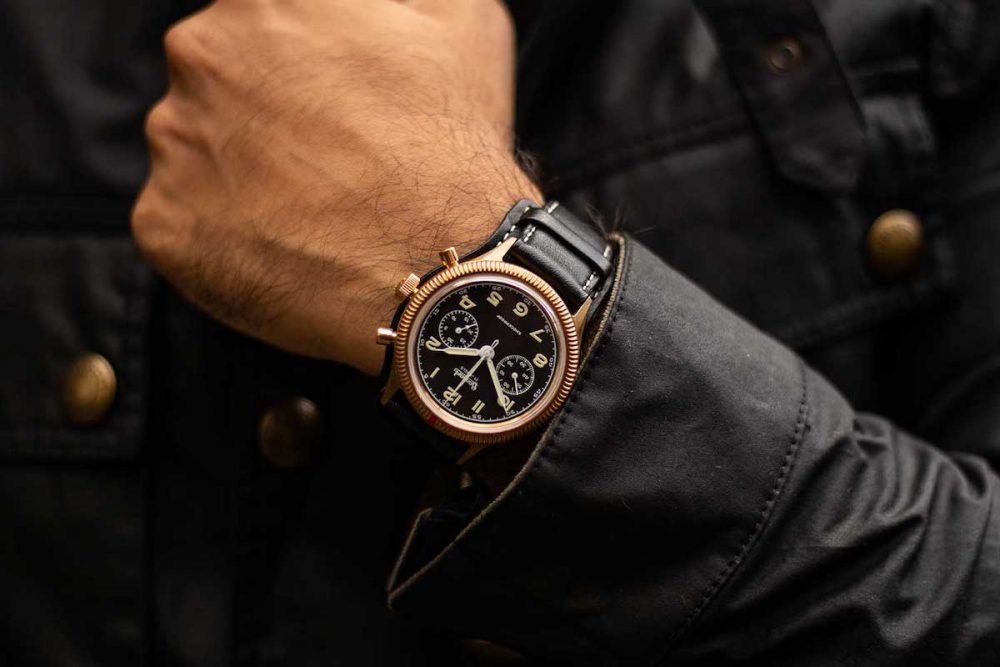 Who is Hanhart, you ask? OK, let’s go back in time to 1882 when one Johann A. Hanhart set up his eponymous brand in Diessenhofen, Switzerland. He relocated to Schwenningen in south Germany near the idyllic Black Forest in 1902, and by 1924, the Hanhart brand had gained a reputation for making highly precise yet affordable stopwatches. At the time this type of complication was only available with a staggering price tag. Hanhart, seeing the popularity of competitive sports, wanted to democratize these timing devices, achieving great success as a result.

In 1935, the company, helmed by Johann’s son, Wilhelm Julius Hanhart, added to its achievements the creation of a split-seconds stopwatch. In 1938, Hanhart launched its first modern chronograph powered by the legendary Calibre 40. This was a monopusher movement which was utilized to create watches for the German Luftwaffe and Navy. By 1939, officers in both these branches would wear chronographs typified by a thin fluted rotating bezel, and a large matte black dial with luminous cathedral hands and large luminous markers. Interestingly, from the beginning, these watches were made in both stainless steel and chrome-coated brass. 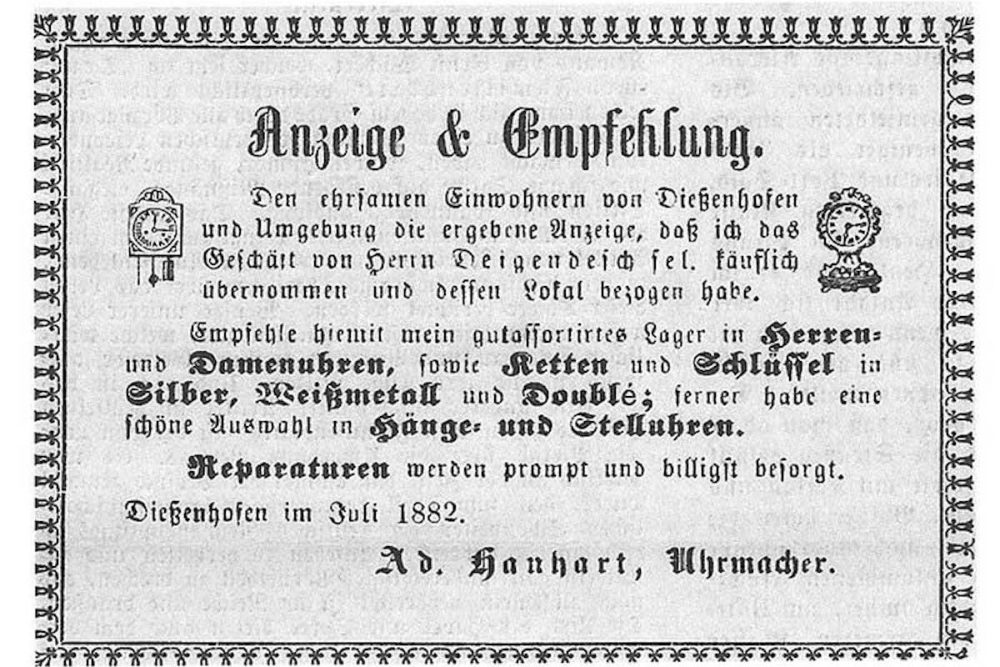 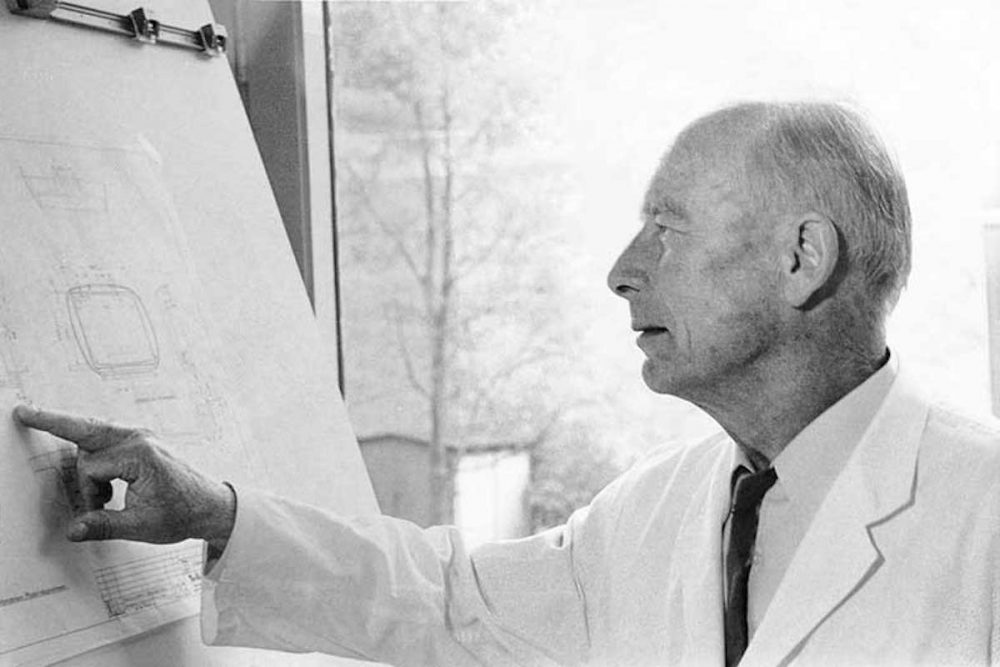 In 1935, Wilhelm Julius Hanhart, son of Johan A. Hanhart, added the brand's achievements to the creation of split-seconds stopwatch (Image: Hanhart.com) 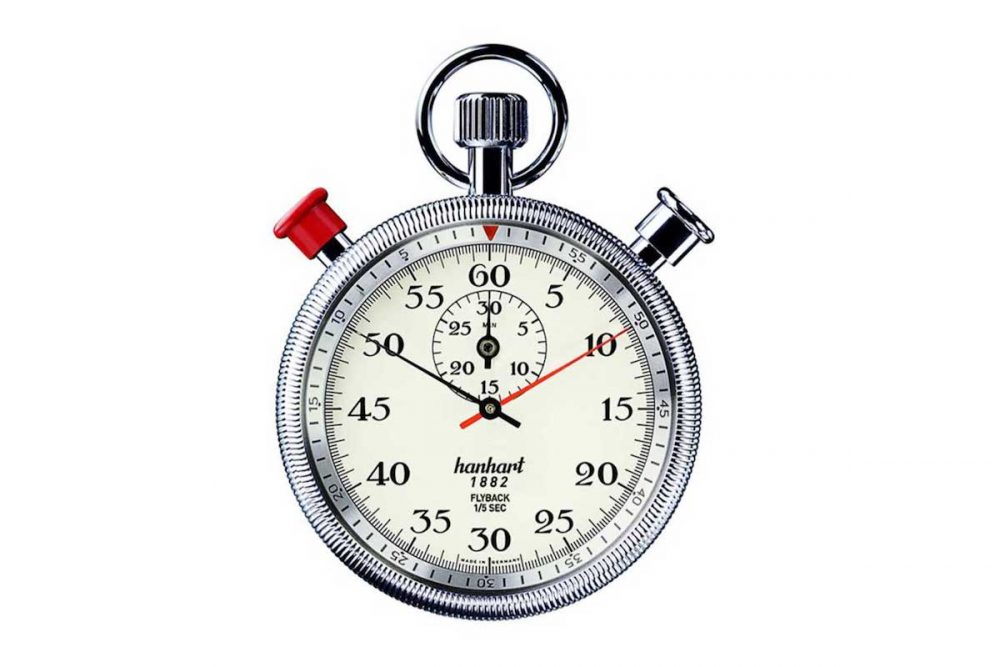 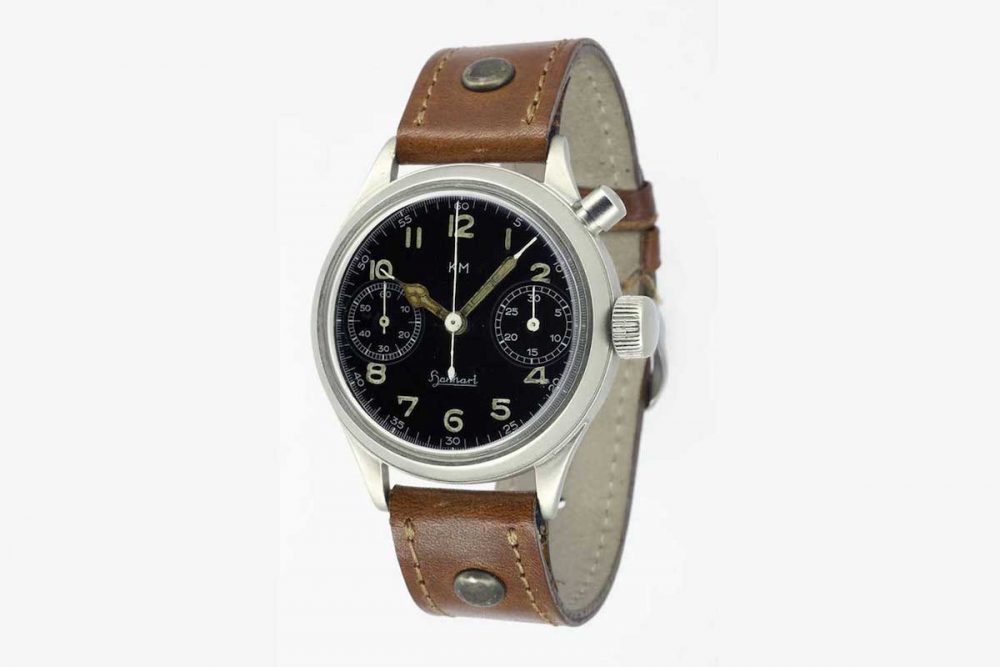 In 1938, Hanhart launched its first modern chronograph powered by the legendary Calibre 40, a monopusher movement which was utilized to create watches for the German Luftwaffe and navy (Image: Hanhart.com)

1941 saw the introduction of the brand’s first two-button flyback chronograph movement, the Calibre 41, a column-wheel-powered engineering masterpiece. Following the war, Hanhart produced Type XX watches for the French military under the name Vixa. 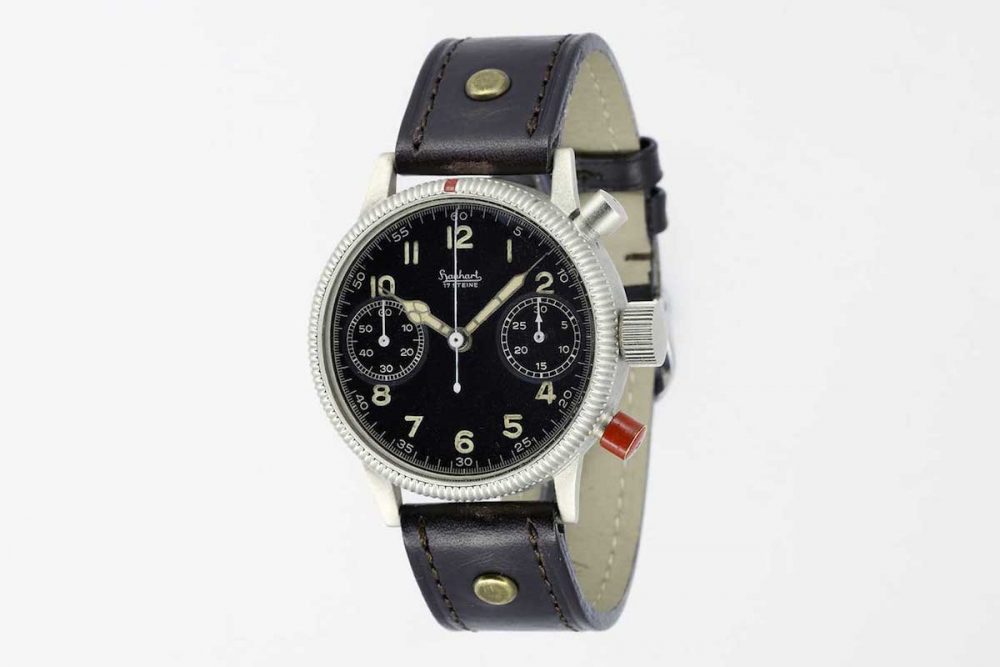 In 1956, Hanhart resumed production of its legendary pilot’s watches, now with the updated Calibre 42. These watches are quickly distinguished from the WWII-era timepieces by having modern pencil-shaped hands. 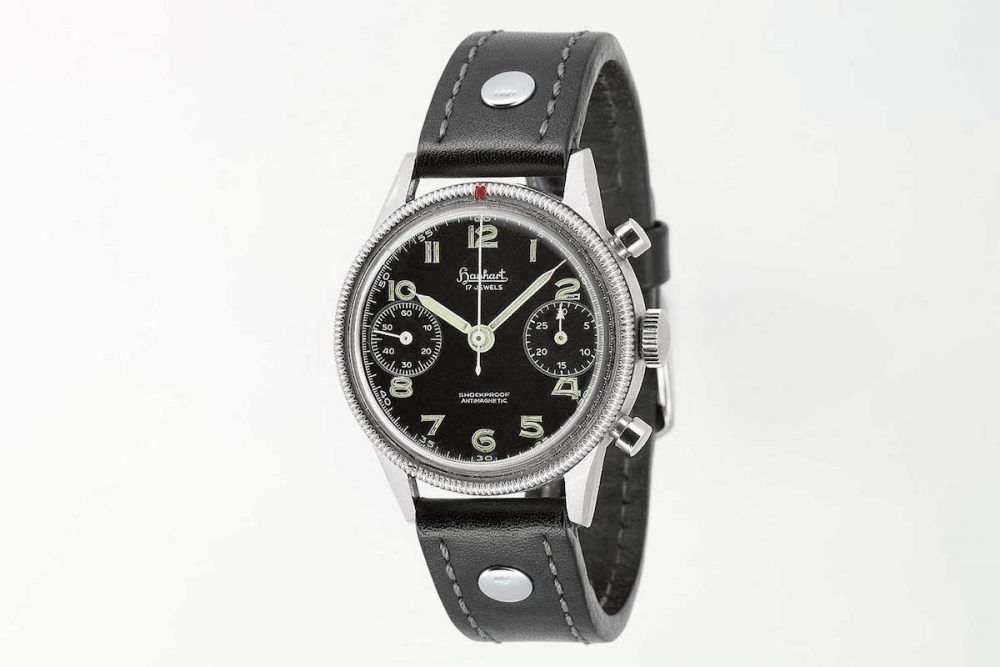 In 1956, Hanhart produced its legendary pilot's watches, with the updated Calibre 41, quickly distinguished from the WWII-era timepieces by modern pencil-shaped hands. (Image: Hanhart.com)

By 1958, however, Hanhart had ceased production of pilot’s watches. During the two-year period in which the company manufactured the 417 Flieger or Pilot’s Chronograph, it is believed that only 1,000 watches were made; 500 with the designation ES for stainless steel and 500 more with no additional designation, which were brass watches that were chrome-plated. There was a further minuscule number of these watches made with white dials for medical professionals. 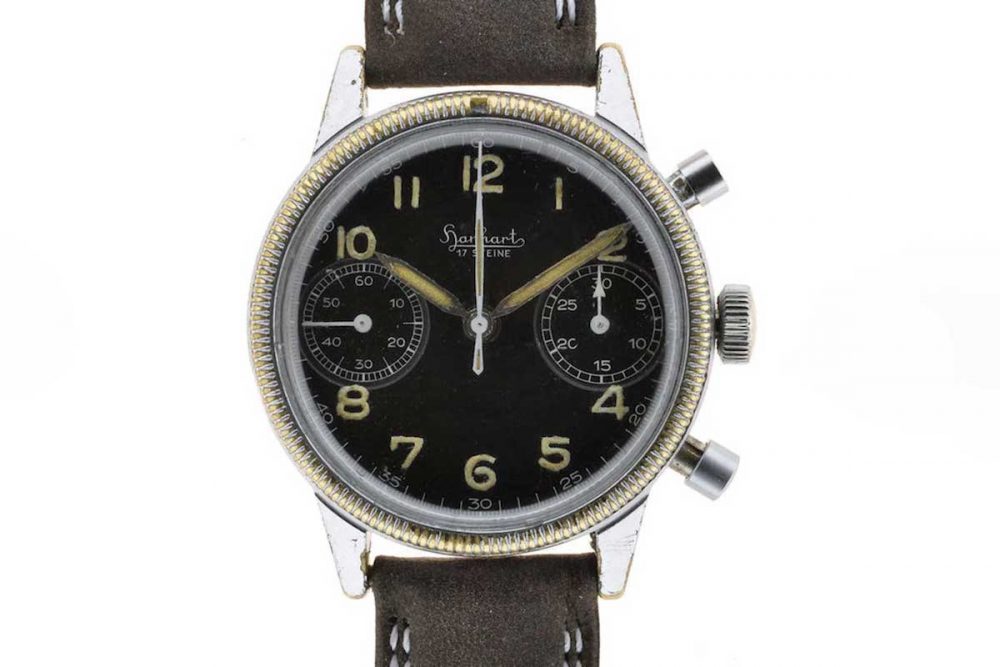 The 417 was one of the most handsome and most pragmatically designed military chronographs ever created. These watches eventually became sought after by anyone interested in performance sports, thanks to their reliable movements, high visibility due to the 42mm case size and clean dial design, and their shockproof and antimagnetic status, which is proudly proclaimed on the lower half of the dial. 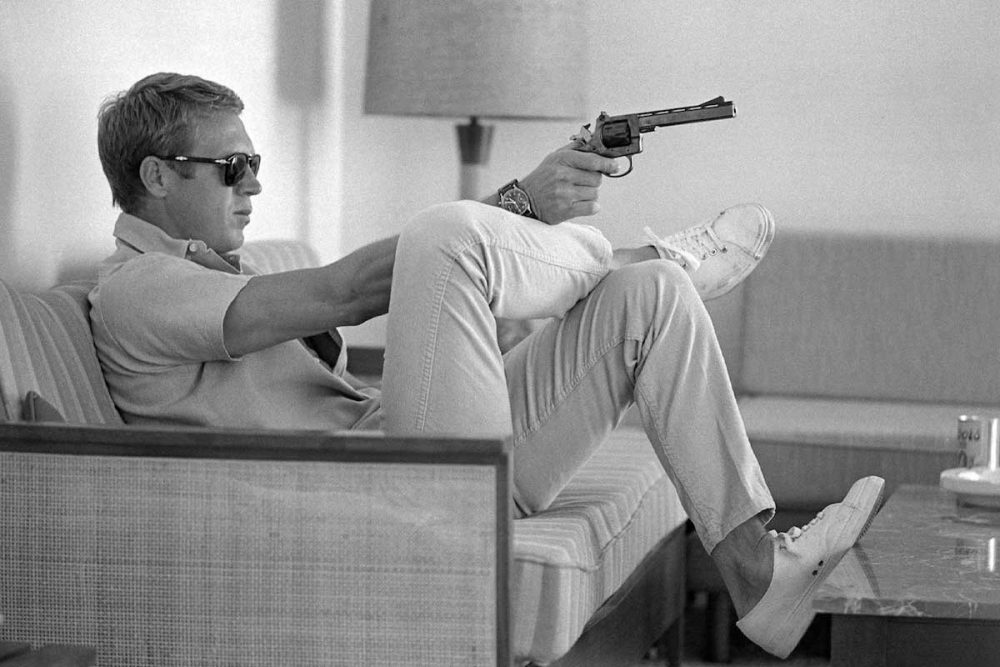 Profile view of Steve McQueen as he sits on a sofa in his home, sunglasses over his eyes, as he aims handgun, his wrist balanced on his crossed leg, Palm Springs, California, May 1963. (Photo by John Dominis/The LIFE Picture Collection via Getty Images)

How McQueen came to own his watch is something of a mystery. Though what is clear is that he had exemplary taste in everything, including motorcycles, Bud Ekins- tuned Triumphs and Nortons in particular; cars, the 1958 Porsche 1600 356 Super Speedster, Ferrari 275 GTB/4 and Jaguar XKSS; bespoke suits, as evinced by his collaboration with Douglas Hayward in The Thomas Crown Affair; and women, Jacqueline Bisset, Candice Bergen and Ali MacGraw. So, it is no surprise that he naturally gravitated to the strikingly masculine and highly reliable Hanhart 417 (his watch is believed to be an ES), which he wore most frequently on a Bund or “fat strap” style bracelet.

His affection for his Hanhart 417 was made conspicuous when McQueen went to East Germany in 1964, along with motorcycle racing specialists the Ekins brothers, to represent the United States at the International Six Days Trial (ISDT). Often described as the Olympics of enduro motorcycle racing, the ISDT was first established in Carlisle, England and invited five-man teams from countries around the world to a showdown in off-road motorcycle skills. It is well-known that McQueen was at this time one of the United States’ most skilled motorcyclists. 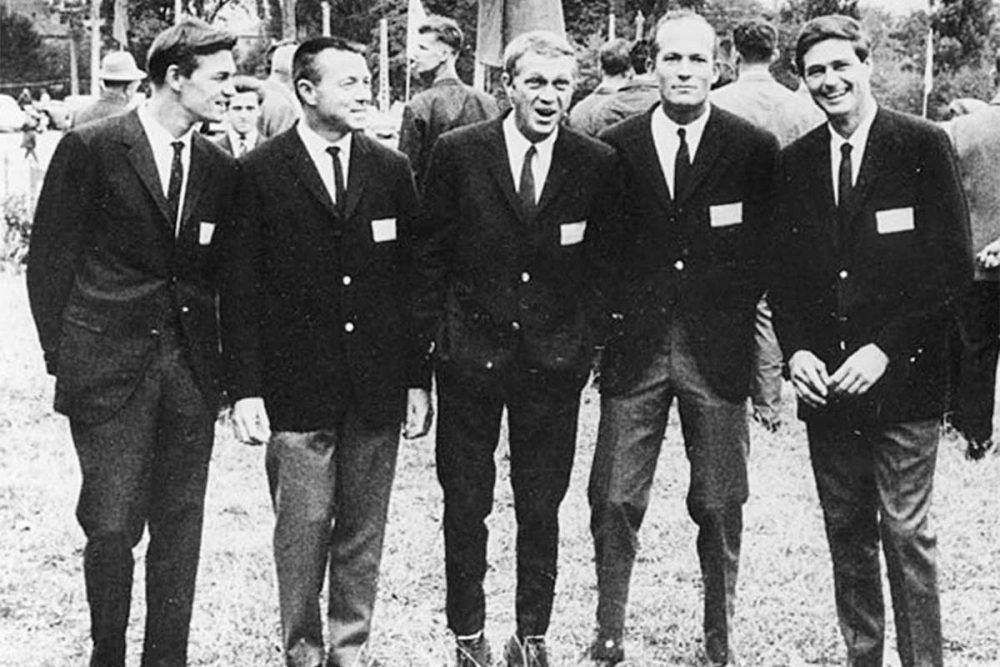 Steve McQueen bearing the Star-Spangled Banner on behalf of the "California Boys" at the 1964 IDST (Image: Garcon Gragnon/speedtracktales.com) 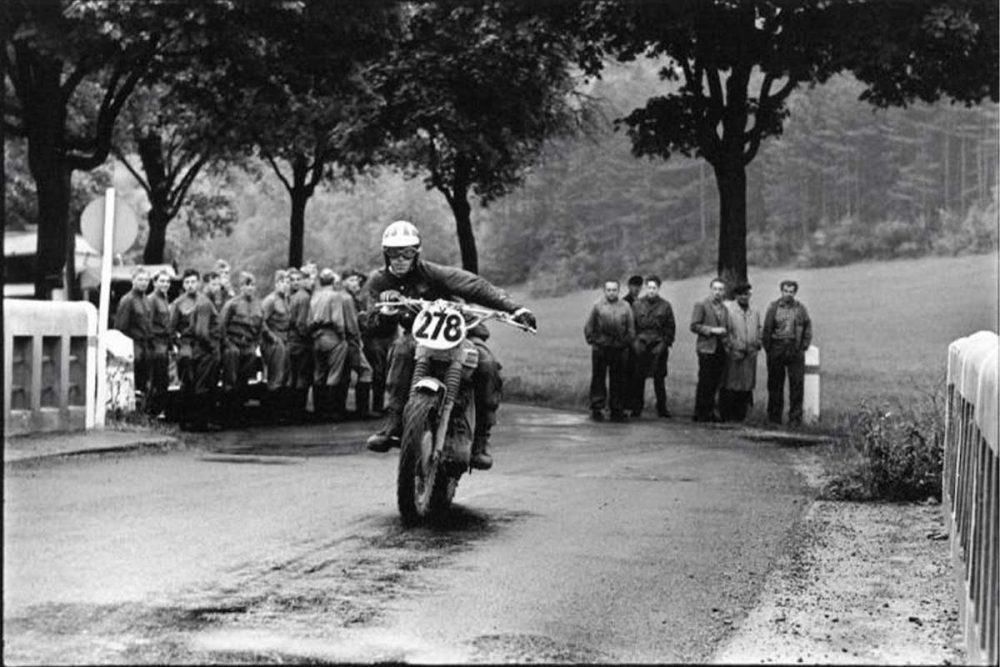 Steve McQueen on the 1964 ISDT dirt track with curious on lookers watching as he expertly manoeuvres a turn (Image Francois Gragnon/speedtracktales.com) 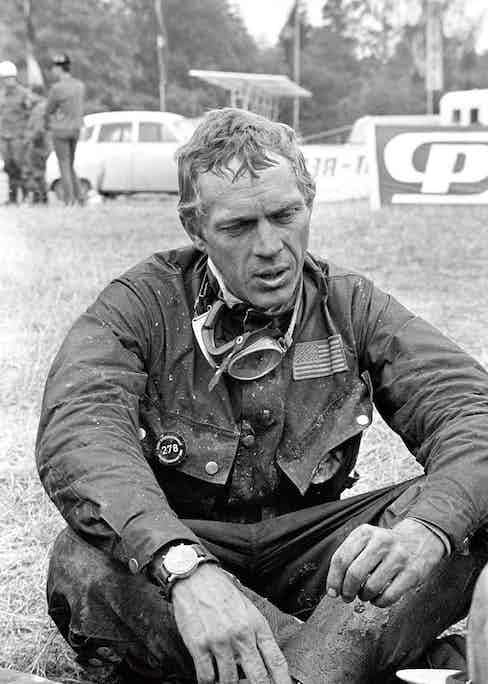 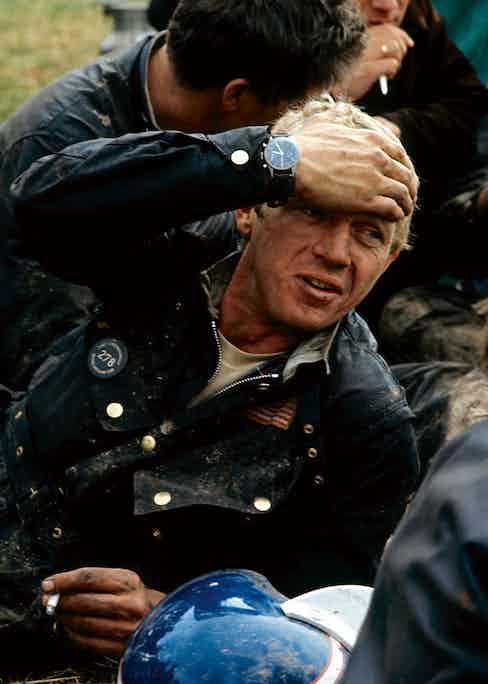 Clearly before the era of massive insurance waivers, McQueen even performed the majority of his bike stunts in 1963’s The Great Escape himself. However, the famous jump over the wire fence was made by his stuntman and ISDT teammate, Bud Ekins, on a Triumph TR6C disguised as a WWII-era BMW. In the ’60s, Ekins competed in seven ISDTs and won four gold medals and one silver. The 1964 ISDT team including McQueen were dubbed the “California Boys”; they were the first American team to ever compete in the ISDT and McQueen had the honour of carrying the Star-Spangled Banner in the opening ceremony.

Now think about it from this perspective. McQueen was notoriously obsessed with detail when it came to competition. Prior to his 1964 race, he had gone to pick up his Triumph TR6 Trophy SC at Comerfords London where he proceeded to make all the modifications himself. So he surely applied that same sense of high scrutiny to the timepieces in his life. The mystery behind McQueen’s Hanhart 417 ES is that while the provenance of his Heuer Monacos and his Rolex Submariners have been well documented, the fate of his Hanhart is unknown. 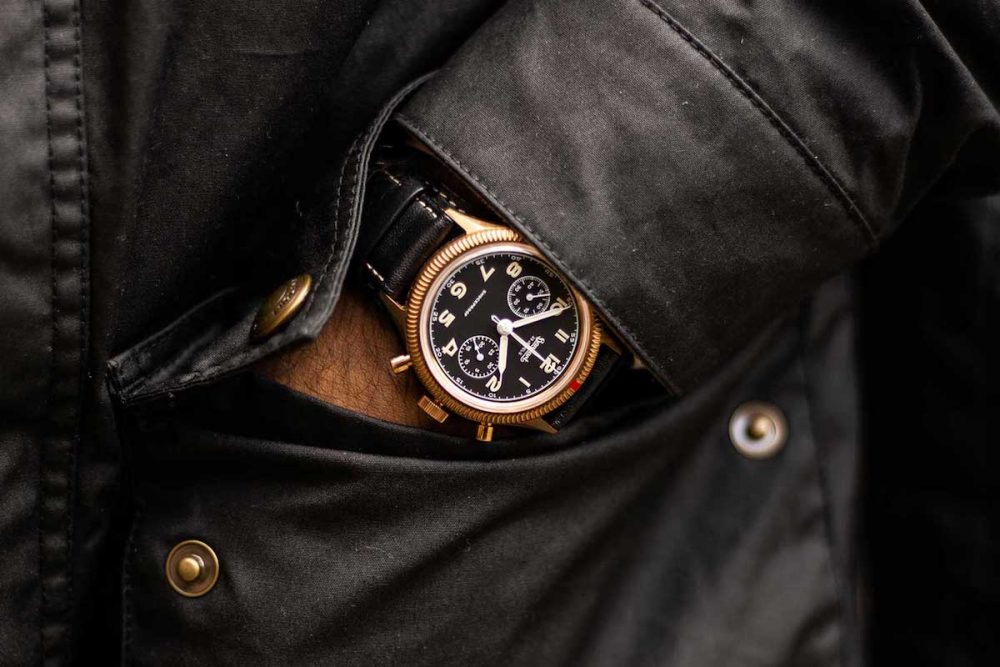 Over the years, Hanhart has continued to manufacture reliable and high value proposition sports chronographs based on the iconography of its legendary Fliegers. However, when it came to creating the homage to the legendary 417 for 2020, Hanhart started with a clean slate. Says Felix Wallner, “The first thing that we wanted to do was recreate the original proportions of the 417. That means, first of all, a relatively thin case. This took a lot of effort as we wanted to incorporate a more practical hand- wound chronograph movement, the Sellita SW 510.

“The next thing was to get back to the historic bezel, which was actually very thin and featured very fine fluting. And then we had to source the right domed sapphire to replicate the look of the original watch. We went through many designs working off original 417 watches so that when you place the new watch and vintage one next to each other, they look almost identical.”

When it came to Hanhart’s collaboration with The Rake and Revolution, I had an idea. I actually really like the appearance of the vintage brass 417 Chronographs, in particular when the chrome coating has worn off and the warm tone of the underlying material is laid bare. I find that the hue of the appealing gold brass perfectly complements that of the aged vintage lume. With that in mind, Hanhart, The Rake and Revolution decided to embark on a vintage- styled version of the iconic 417. 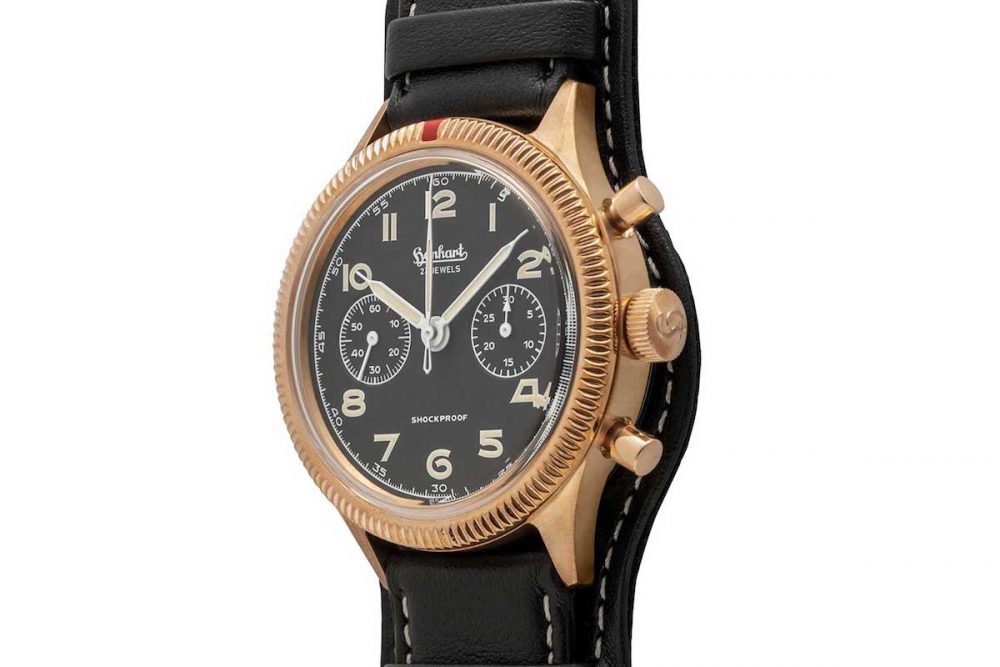 The Hanhart x The Rake x Revolution Limited Edition Bronze 417 Chronograph from the side, fitted on a bund strap. (Image: Revolution) 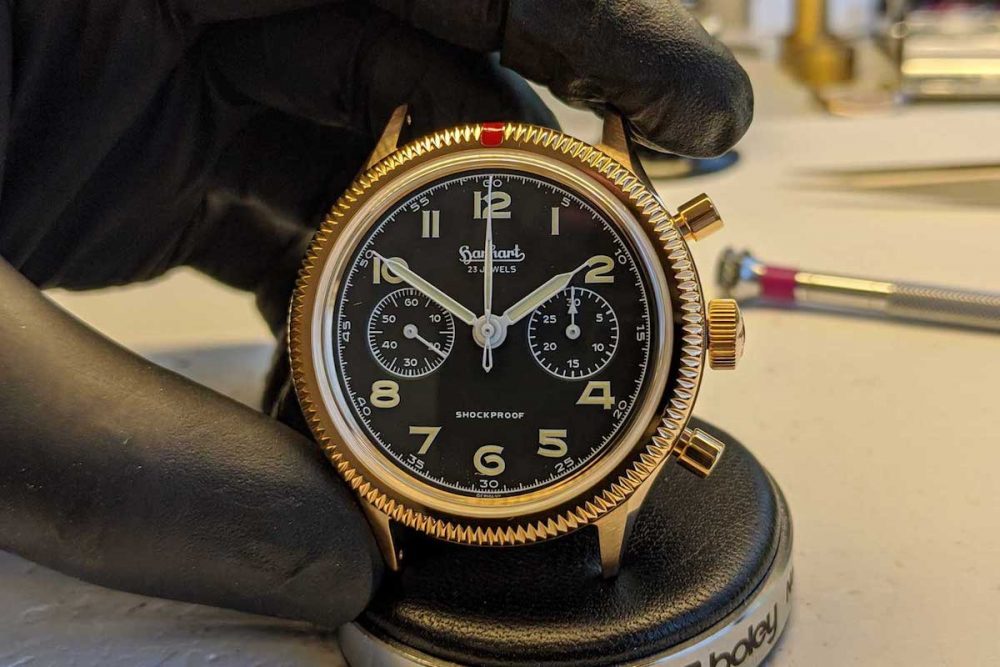 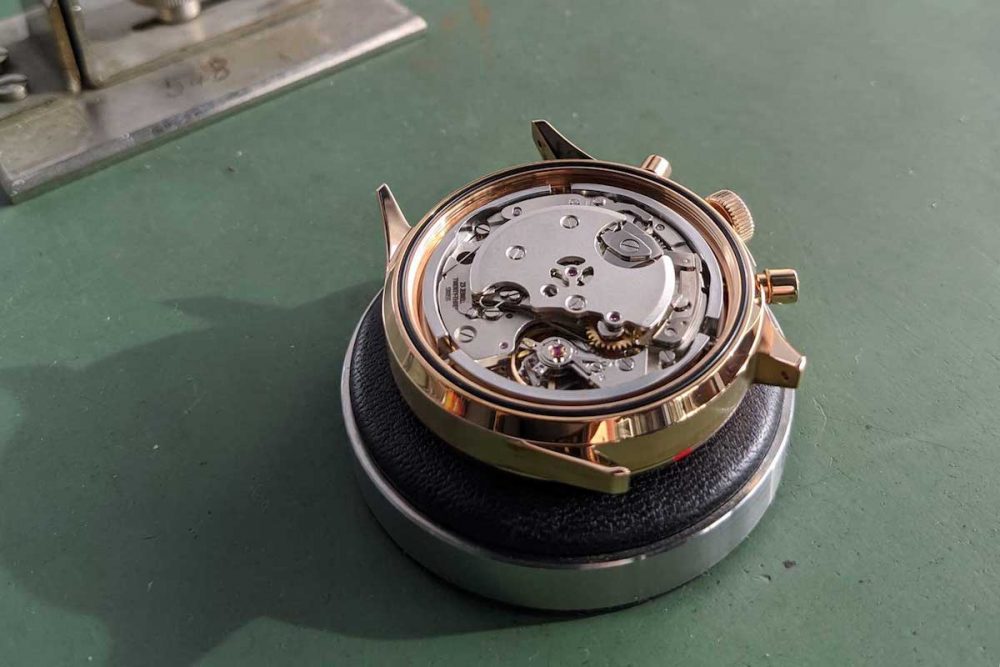 We decided to go with the material that expresses patina faster as befits a rugged motorcycle trail chronograph. Next, Wallner and our team worked on ageing the dial just the right amount to give it an added sense of being unearthed from a drawer or locker after decades, recreating the effect time would have had on its natural patina. The result is stunning to behold.

Finally, we selected a Bund strap in complementary black rough-out material to make it the perfect chronograph to wear, whether engaged in motorcycle endurance racing or just sitting around being the coolest guy in the room. 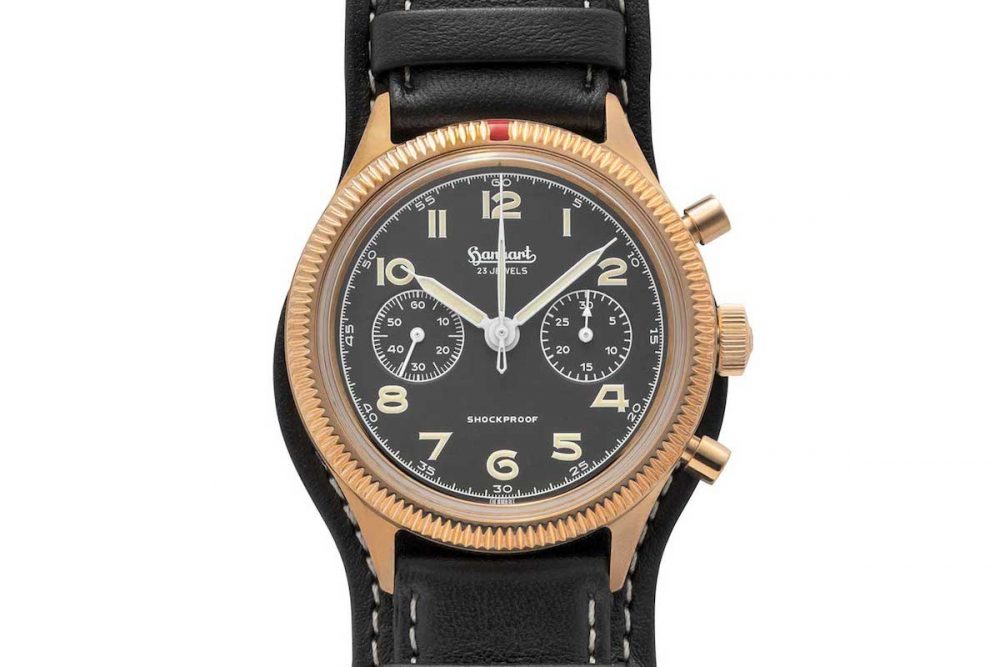 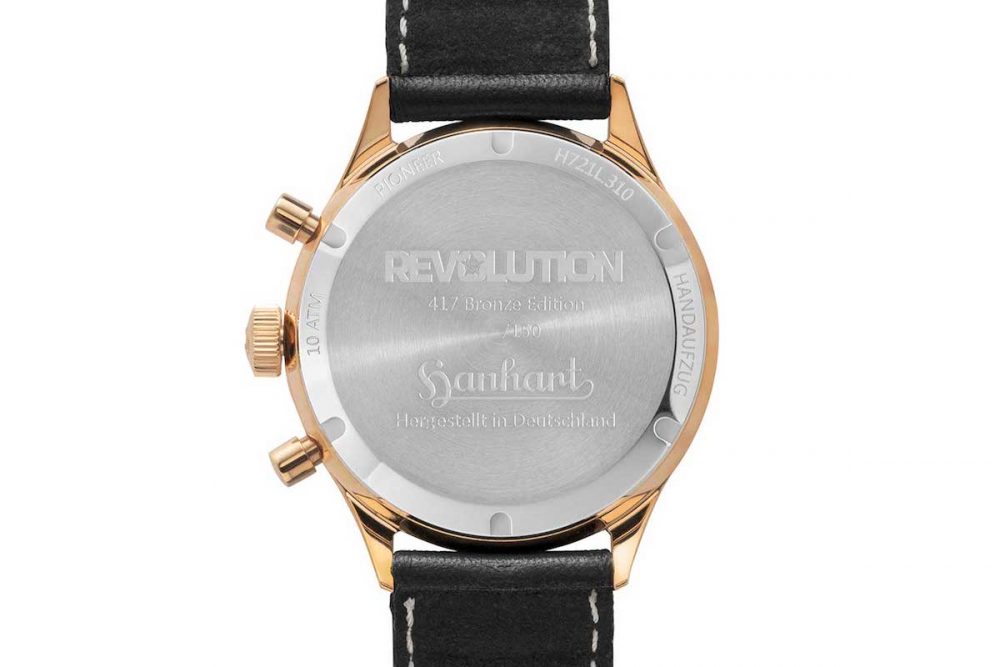 The Hanhart x The Rake & Revolution Bronze 417 Chronograph will be made in a limited series of 150 pieces with a price that is USD 1,900, which is identical to that of the normal production watch made in stainless steel.

Additionally, regarding the launch of the Hanhart 417 we’ve decided to pair it with our favorite British heritage waxed cotton motorcycle jacket, a black Belstaff Trialmaster because we feel from a quality and style perspective it is unparalleled. Note that it has brass hardware all around including the buckles at the belt and throat latch, where some other brands use plastic.

Also, the faded vintage black of the Belstaff jacket completed by its brass snaps and zipper, perfectly complement the color of the quick patina bronze watch on its black Bund strap. We decided to pair the jacket and the watch together in homage to how Steve McQueen showed up with the “California Boys” to represent the USA at the 1964 ISDT, the International Six Day Trials at the time one of the most prestigious off road motorcycle competitions in the world. 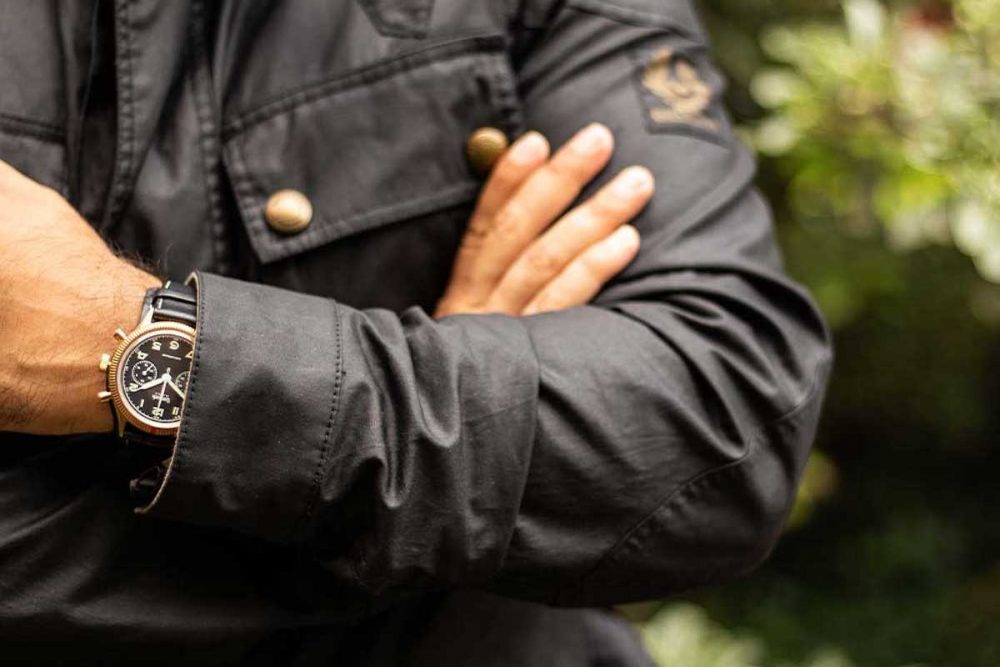 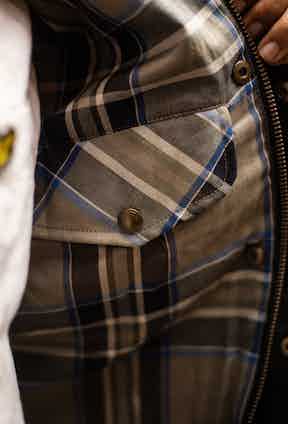 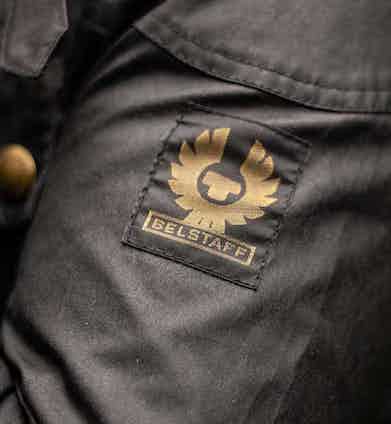 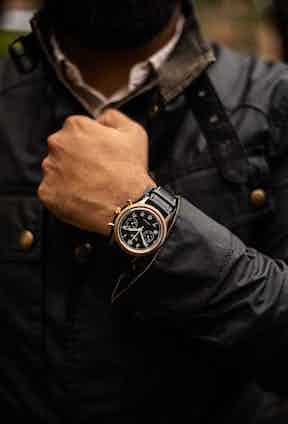 McQueen showed with three critical pieces of equipment: his Triumph TR6C “Desert Sled’ motorcycle, his waxed cotton jacket (it is believed this could be a Barbour but he wore both this and a Belstaff regularly while riding) and, of course, his Hanhart 417 chronograph watch on a Bund strap.

Finally, as a gesture of gratitude to our audience the Hanhart watch retails at USD 1,900 dollars and the Belstaff jacket for USD 590. However, if you choose to purchase them together we are pleased to offer them to you at USD 2,300 — a saving of USD 190, and an example of our enduring commitment to offering you the best values in the online world. Because we believe our readers and clients rock and we want to always accord them our respect and gratitude.