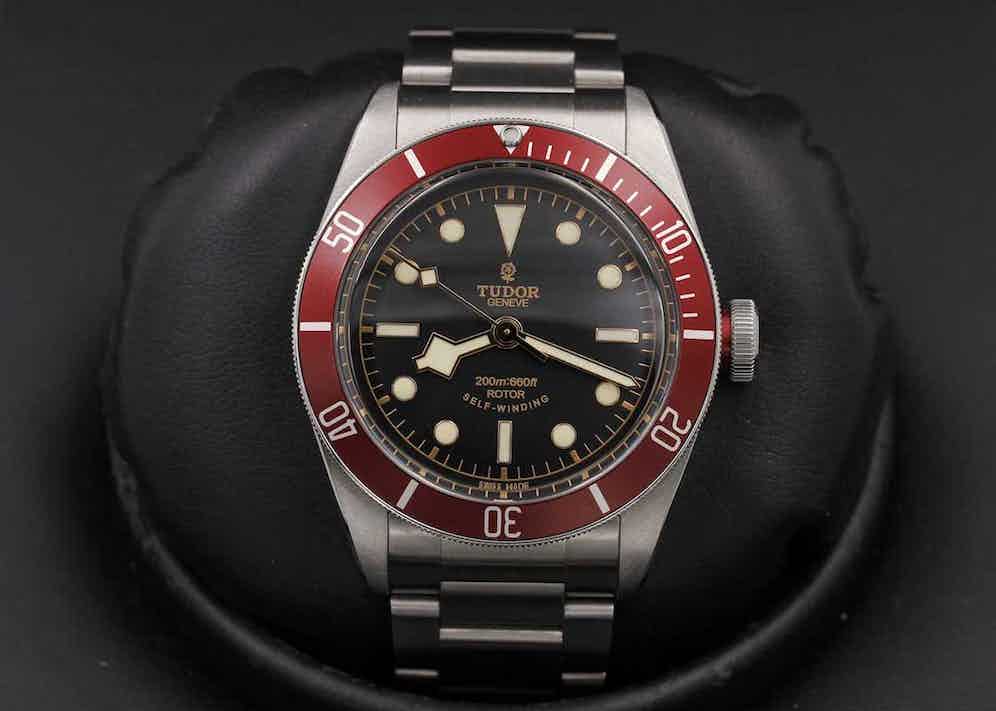 The Tudor Black Bay has been one of the most important watches of this Millennium for Tudor. Actually, it has been THE most important watch of the past 20 years for the brand. Following the brand’s withdrawal from key markets in the early 2000s, the Tudor’s triumphant return in 2010 with a whole new look and feel and the launching of the Heritage line was nothing short of genius. The reimagined watches from Tudor archive were exactly what collectors wanted at the time. The huge boom in vintage watches was well underway by 2010 with prices of Rolex watches in particular rising on a monthly basis. 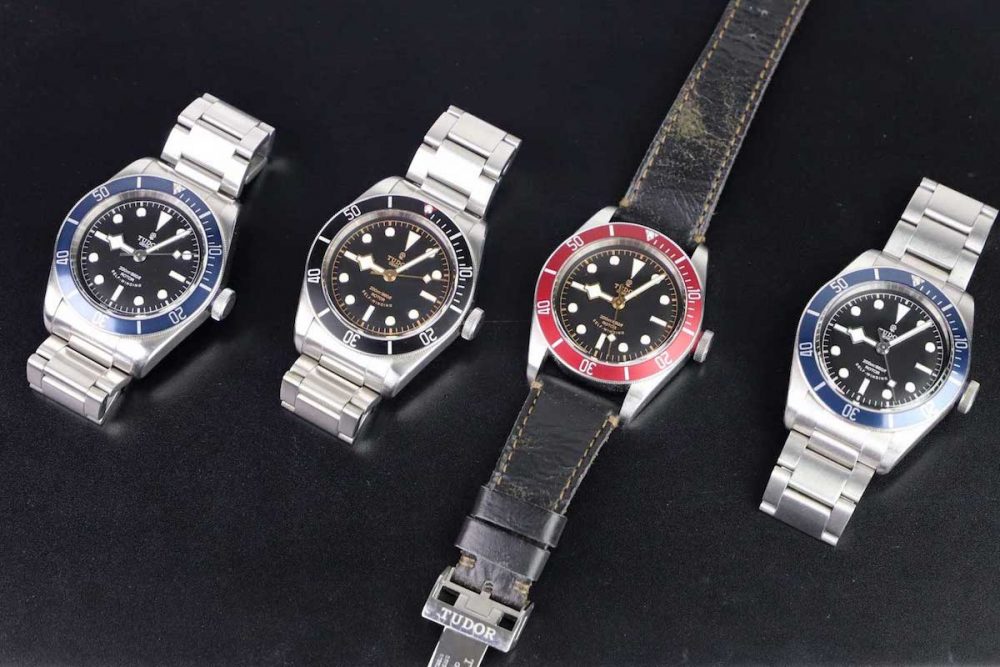 In 2012, things got even more serious with the unveiling of Black Bay. This large, no-crown-guard divers watch was more than a Heritage piece…it was the opportunity for collectors to own a Big Crown Tudor. And more than that, this Big Crown watch could be worn on the beach, in the pool and for just about any other modern day activity that a vintage piece would never be suitable. The Black Bay had arrived and it was the beginning of a new chapter for Tudor.

A History of Tudor Dive Watches

Tudor’s first toe-dip into the diver’s realm was reference 7922 in 1954. The watch had a highly legible dial layout, with hands and hour markers that were Radium. This allowed the wearer to tell the time in dark conditions such as underwater or in the dark. The rotating bezel allowed the wearer to measure elapsed time by moving the triangle, also with luminous filling, to the where the minute hand was at the beginning of the dive and therefore knowing exactly how long they had been submerged. The first batch of ref. 7922 were fitted with pencil hands, that were the predecessor of the more well-known mercedes pattern hands. The 7922 was a self-winding automatic watch that was driven by the calibre 390, based on a Fleurier movement. 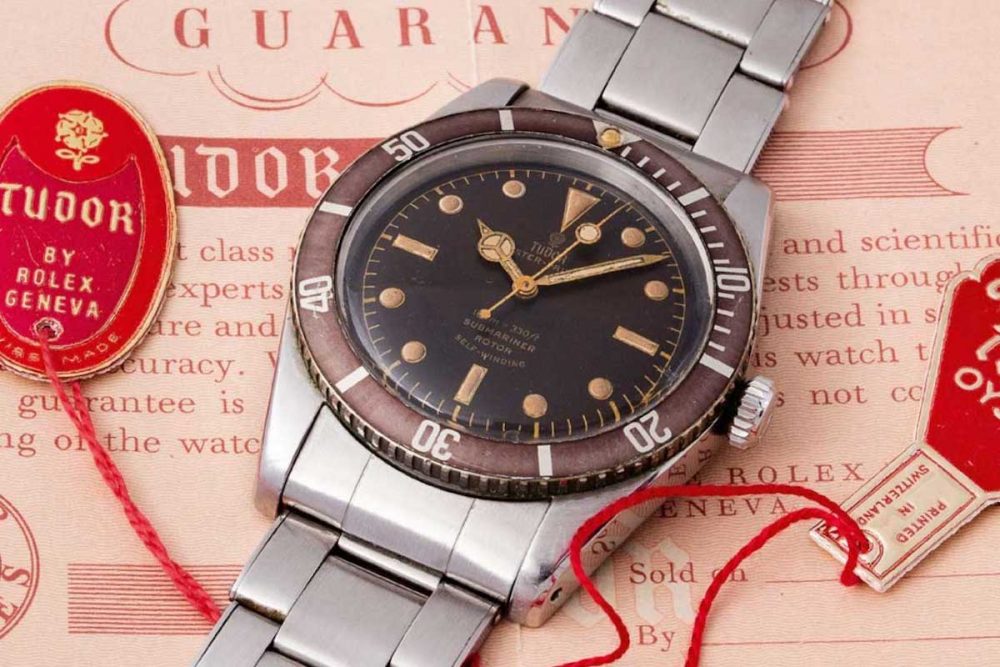 Tudor’s dive watch history is linked to the brand’s relationship with a number of key navies around the world. The most famous relationship began 1956 with the French Navy, the Marine Nationale, who ordered a batch of Tudor Submariners ref. 7922. The watches were put into active service with the divers, and the French Navy provided valuable insights into the watches' abilities in the field. The feedback was that the navy wanted a watch that was a little more robust with divers requesting a winding crown that was easier to use. Tudor provided a second batch of 7922 that featured a slightly different case profile and that were fitted with a large oversize winding crown. 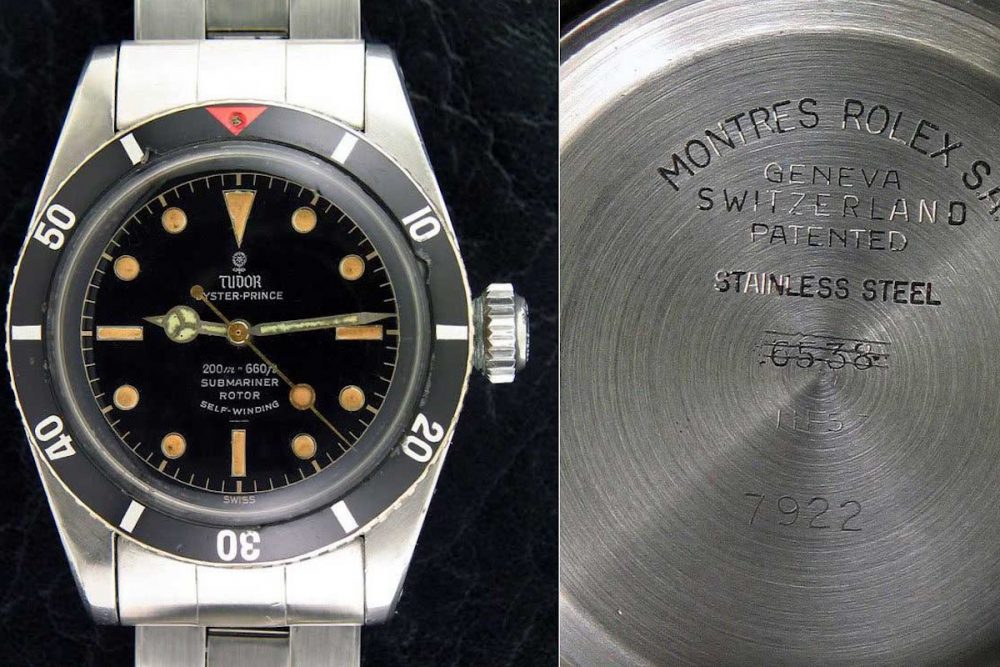 What we now know is that Tudor took a batch of Rolex reference 6538 ‘Big Crown’ cases and fitted them with Tudor dials and movements and re-engraved the case reference as 7922. The clue was in the caseback where the cases were stamped inside with 6538, which was scored out and 7922 was stamped above it. These watches were essentially prototypes for the next watch in the Tudor family, the legendary reference 7924. 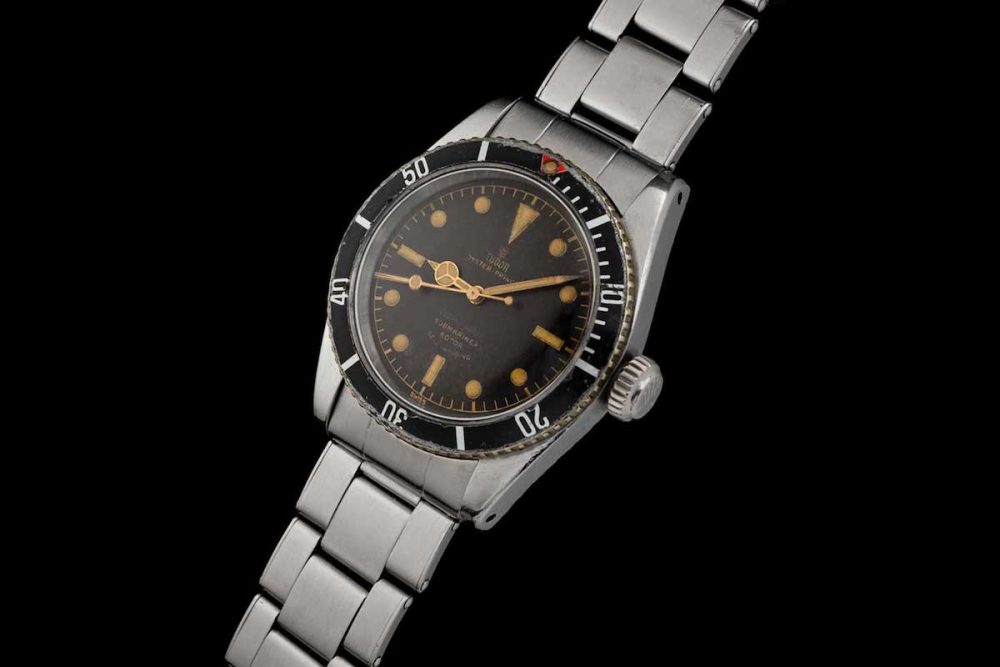 The reference 7924 came to market in 1958 and was Tudor’s response to the French divers’ request for a more robust watch that was easier to operate. The robustness led to Tudor being able to depth rate the watch to 200 metres, double what the 7922 could go down to. To make the Submariner easier to operate, Tudor adopted the oversized 8mm crown that they had tested in the prototype second batch of 7922. It is this large Oyster crown with the word BREVET on it that led to these 1950 Subs being known as Big Crowns by collectors.

Early in 1958, a batch of these watches was delivered to the French Navy and the watches went into professional use. It wasn't, however, just the French Navy that issued the Tudor 7924 to its troops. The United States Navy and the Argentinian Navy also issued the Tudor Big Crown. These were super-tough durable watches that could withstand the rigors of military service, but at a price point that was affordable for the defense budgets of these navies. This was achieved by the use of third-party movements that Tudor modified to meet its stringent standards. In fact, many or most of the components of vintage Tudor watches are the same as their Rolex counterparts, except for the movement and dials. 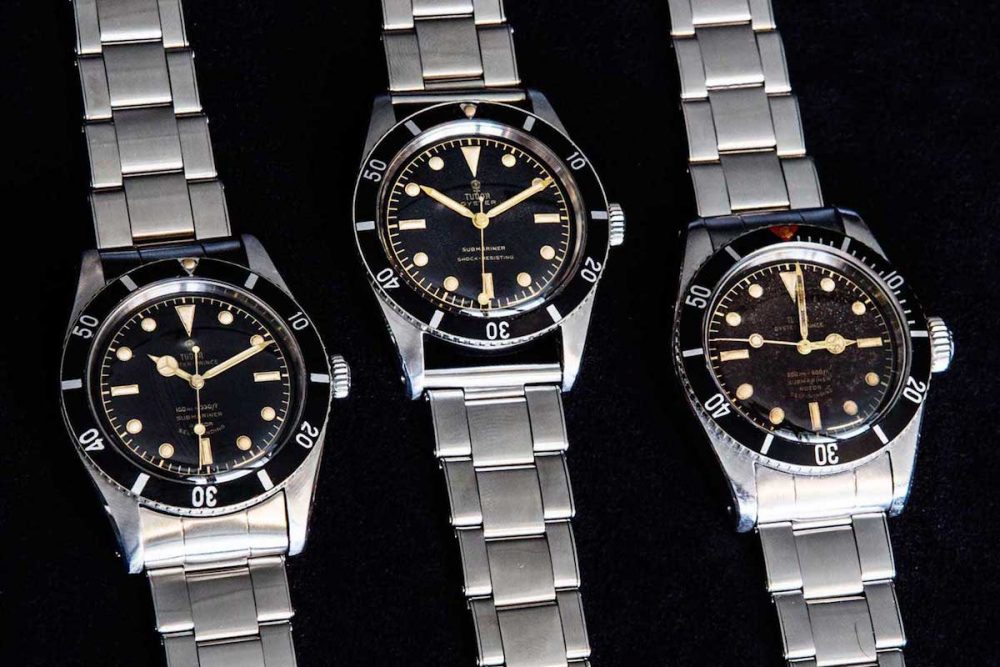 One interesting watch of note from this era is the reference 7923. These watches were made in very small numbers and were a very niche offering from Tudor. The 7923 was a manually wound Submariner and is in fact the only manual-wind Submariner from either Rolex or Tudor. Due to its being manual wind, the case was very low profile. Nobody can know for sure why the decision was taken to test the market with these pieces, but a best guess would be that maybe it was intended as a very well priced entry-level submariner for recreational divers. These watches are incredibly rare and were made for a short period in 1955. A small number of these watches have appeared with a so-called ‘red depth’ dial. And it was this watch that was the inspiration for the inaugural Tudor Only Watch piece. 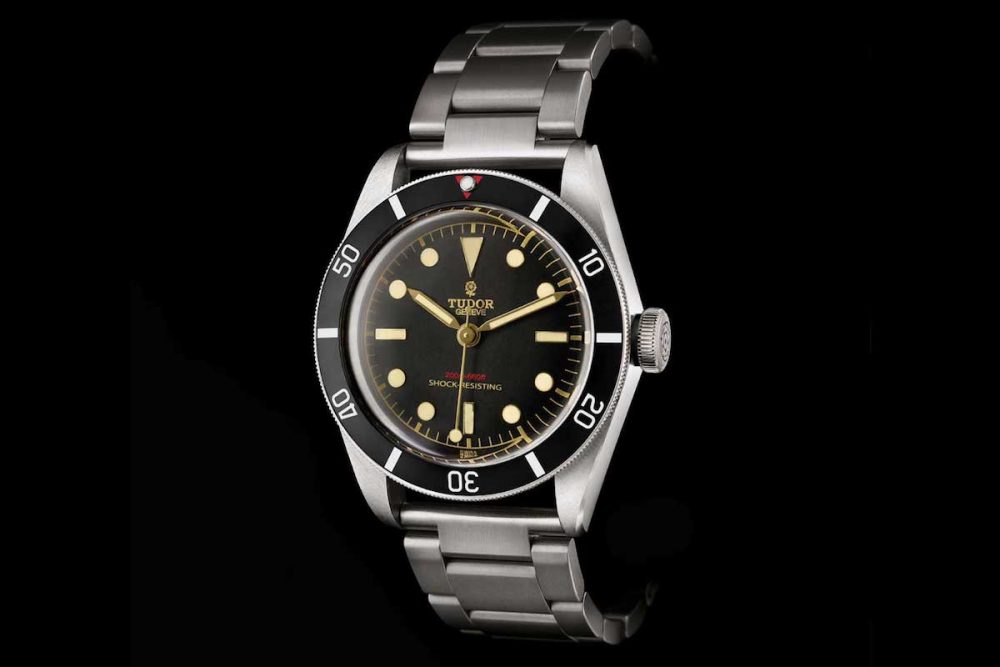 For a just over a decade from 1958, Tudor continued to supply both the French and US Navy with Submariners. In 1959 the reference 7928 was introduced that featured a new 7mm winding crown and most notably, crown guards that flanked the winder and afforded more protection to the most vulnerable part of the watch. The 7928 was always fitted with Mercedes-pattern hands, but the French divers requested something new. In 1969 Tudor began offering snowflake hands on their Submariners. This coincided with the brands move away from Fleurier movements and adopting ETA calibres that they modified to meet the Wilsdorf standard. 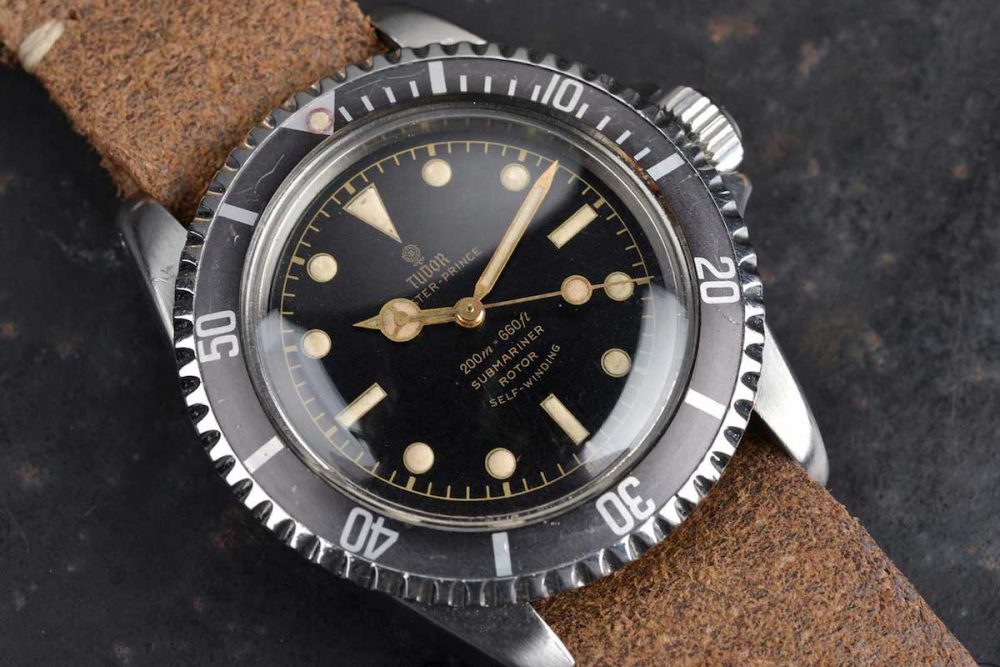 It was this snowflake hand that became Tudor’s most well-known signature that we can now see in the Black Bay watches. The Tudor Submariners were fitted all through the 1970s until the early 1980s when the Mercedes-pattern hands returned to active duty. The first series of snowflake hand equipped watches were the reference 7016 and 7021, the 7021 was also the first Tudor Submariner that was equipped with a date function. Alongside the introduction of the snowflake hands Tudor also offered a new color for the dials and bezels of their Subs – beautiful blue! The blue was immediately popular and it is the blue no-date snowflake Submariners that most people associate with the French navy and the MN watches. 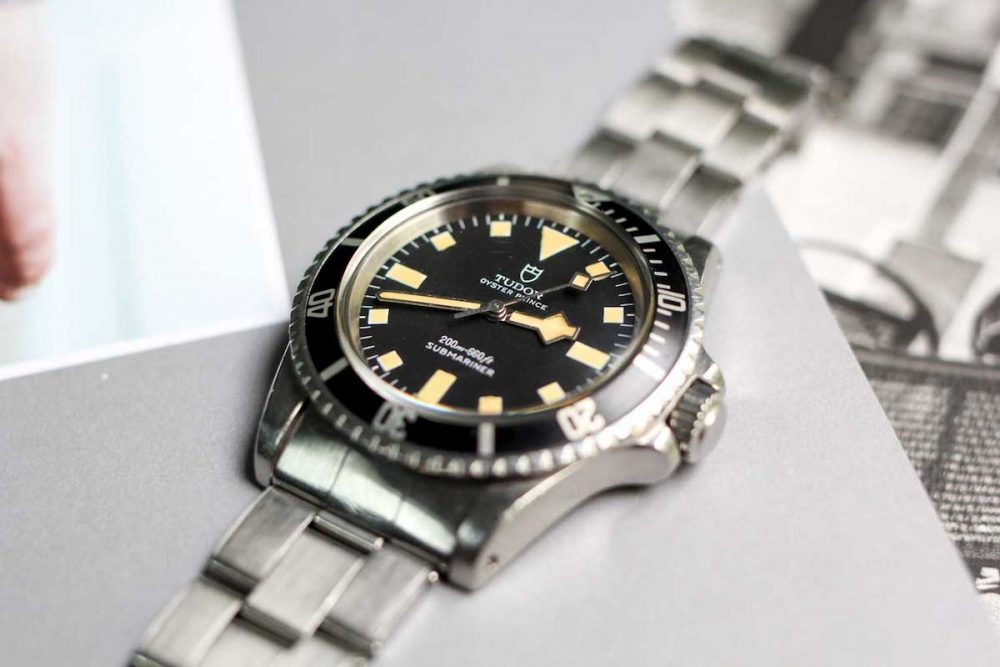 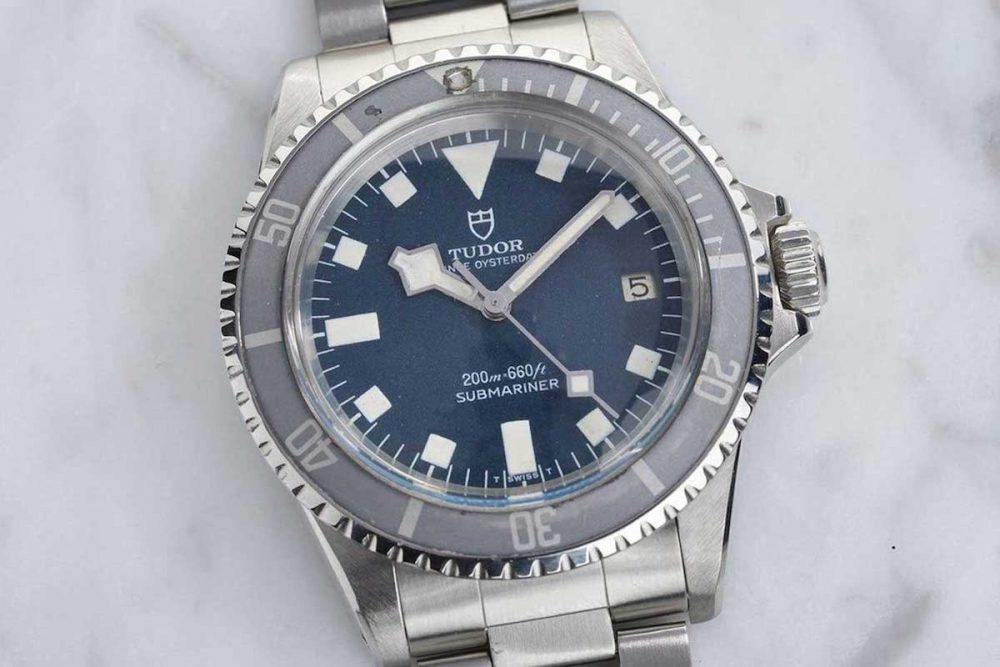 And so to the Black Bay! If we fast forward three decades from the early 1980s to 2012, we arrive at the unveiling of the Heritage Black Bay.

When the watch was originally unveiled, it had a modified ETA movement still. However in 2016, Tudor rolled-out its new in-house calibre and all the watches (except the smaller dress versions of the Black Bay) were updated to house the new movement. The original Black Bay was a 42mm watch with a black dial with gilt printing, a dome sapphire glass and a serious attitude. 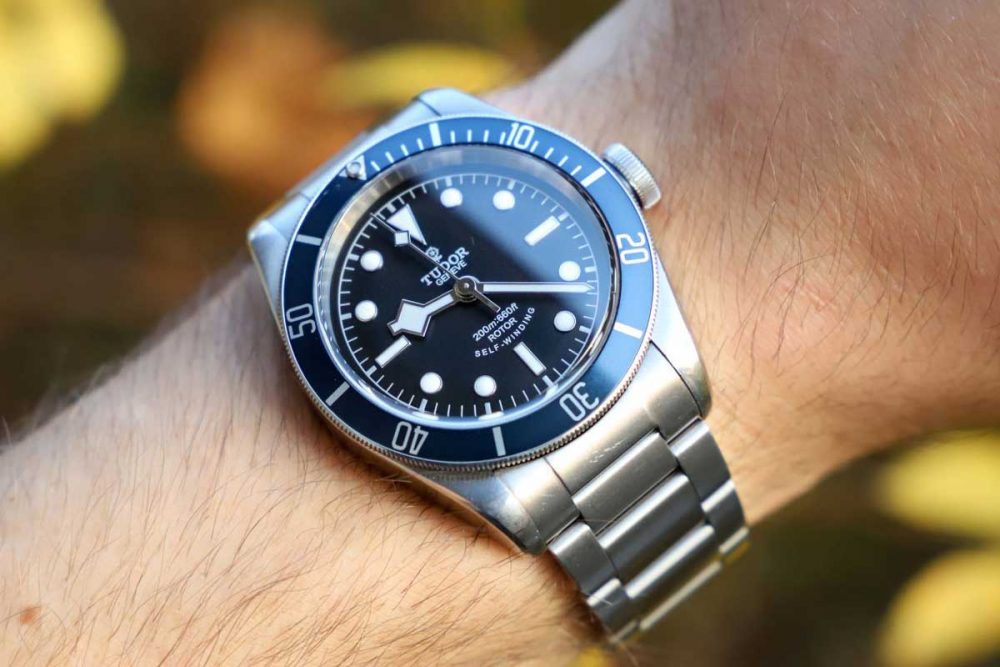 The watch borrowed from various elements of the vintage watches, the case of the 7922 and the large winding crown of the 7924. And of course, the snowflake hands from the 1970s watches. This fusion of key design elements were the perfect celebration of everything that was great about the vintage Submariners and repackaged for 21st century living. Following the original red, Tudor also introduced a blue bezel and finally a black bezel, but always retaining a black dial.

An easy way to differentiate the current generation of Tudor Black Bay watches from the ETA-powered models of yesteryear is to look at the dial. In the first generation of Black Bays, Tudor used the historical rose logo on the dial; this logo was then replaced with the shield logo when Tudor introduced their in-house movement. Naturally, the Tudor Black Bay watches with the floral insignia are now a collector’s item, and have cemented the watchmaker as a sought-after brand on the secondary market. 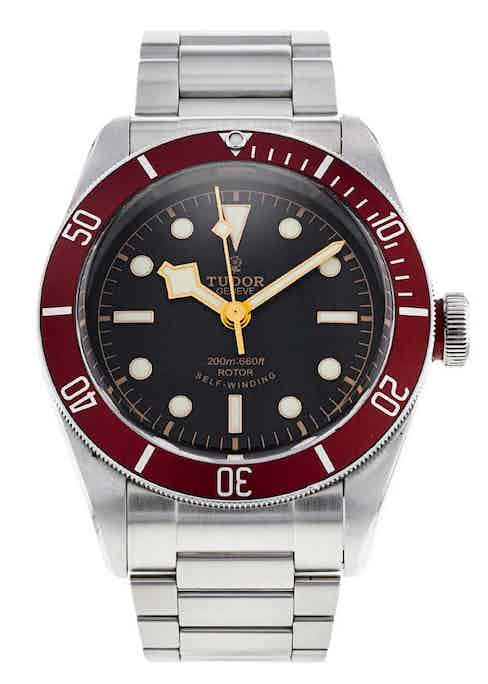 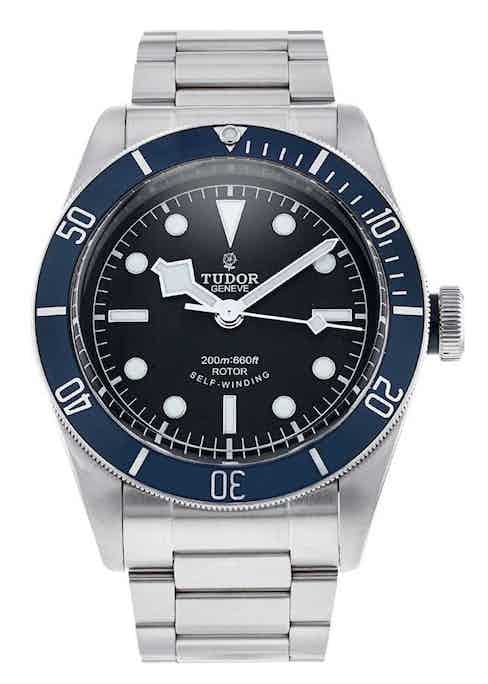