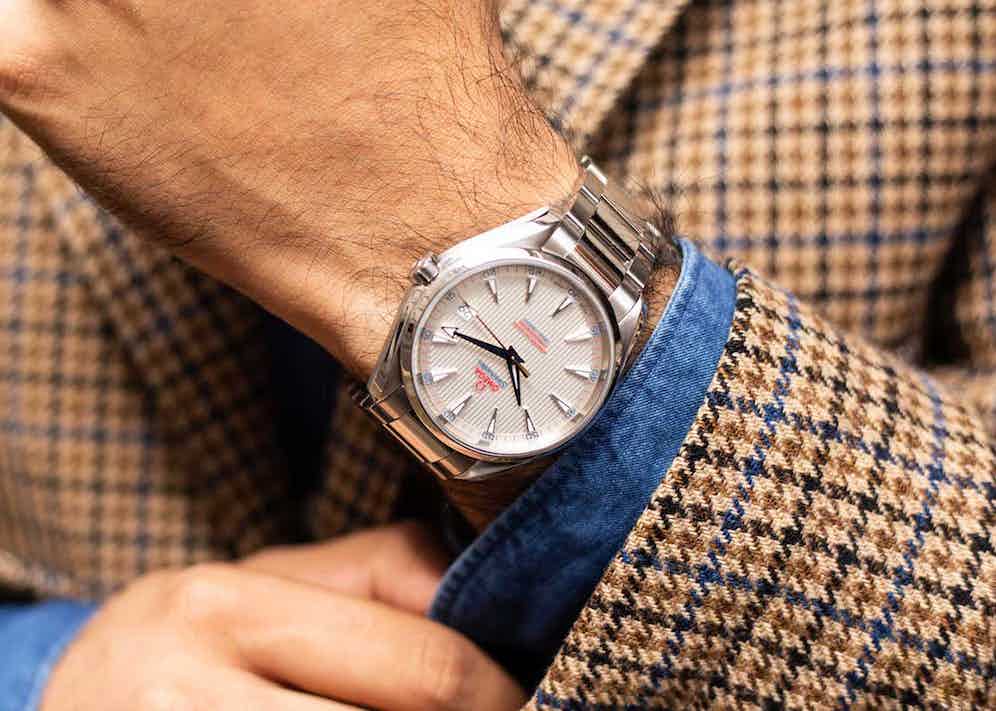 Despite the overwhelming preponderance of haute horlogerie, high complications and the like, in the minds of watch collectors everywhere, there still remains a necessary place in our hearts for the perfect everyday watch.

This is a category that most beginners gravitate to on choosing their first luxury watch, and is one that even the most seasoned watch connoisseurs will have an opinion about. The ultimate concern with watches like these of course is practicality, and of interest as well are the features and technology that watch brands employ to attain said practicality.

When the rain comes down, and when some rough activity looks set to dominate our immediate future, it is something simple, hardy and precise that we choose to adorn our wrist, that can slug off “the slings and arrows” of daily life, so to speak, and emerge unscathed, to carry on with its owner in the glory of their adventures. 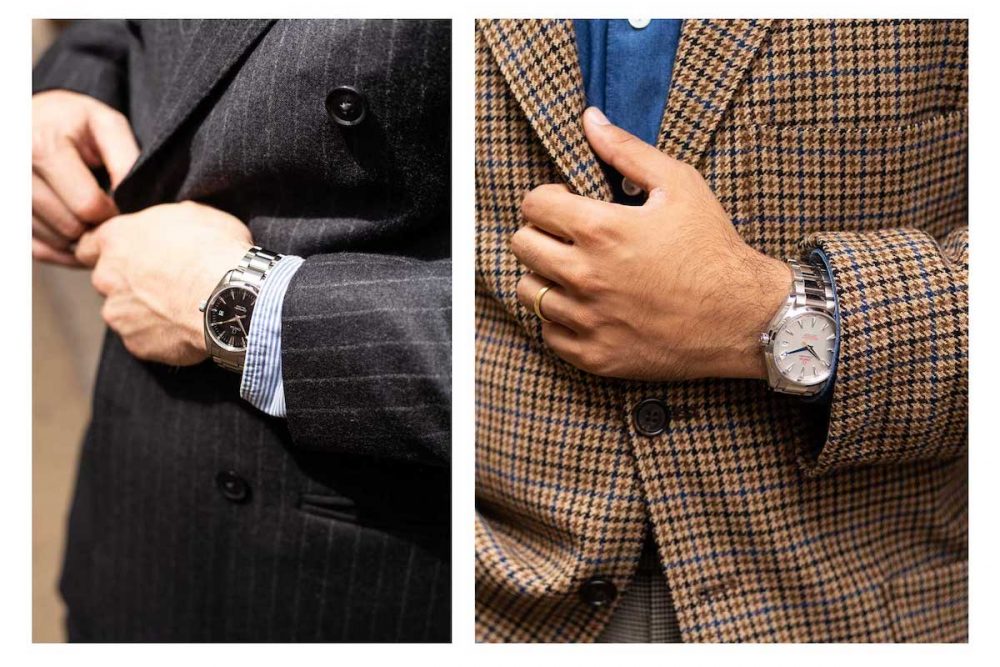 If you're in the running for a capable, handsome watch that can do it all with style to spare, look no further than the Omega Aqua Terra. Seen here are two Aqua Terras available in our shop; one comes on a classic 36mm case (left) and the other has a 41.5mm case with a striking dial. (Images: The Rake)

There are many contenders for an everyday watch in the market out there, but one notable collection comes from Omega, in the form of the “AquaTerra”. If you’re in the running for a capable, handsome watch that can do it all with style to spare, look no further than the Omega Aqua Terra. First introduced by Omega in 2002, the Aqua Terra is technically part of the Seamaster family but isn’t a dedicated dive watch. However, it’s quite capable under the waves, thanks to the 150m of water resistance. If it’s not a diver, it’s definitely dive adjacent, and is inspired by life near the water — be it a poolside bar or a luxury yacht.

At Baselworld 2017, Omega introduced the Seamaster Aqua Terra with some styling upgrades as well as new Master Chronometer calibres. The headline feature of the watch was now emblazoned on the dial with the words ``Co-Axial Master Chronometer” instead of the previous depth rating of the watch. This has been moved to the edge of the sapphire case-back in the new Aqua Terra. Omega’s horological achievements were now packed into this watch. “Co-Axial” of course refers to the innovative, lubricant free escapement, invented by George Daniels and licensed to Omega, now found in the Aqua Terra collection, while “Master Chronometer” refers to the rigorous testing that each watch has to pass in order to be labeled as such. 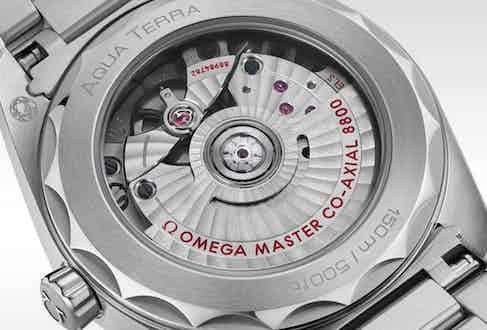 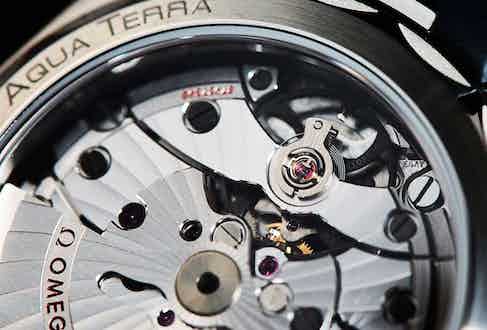 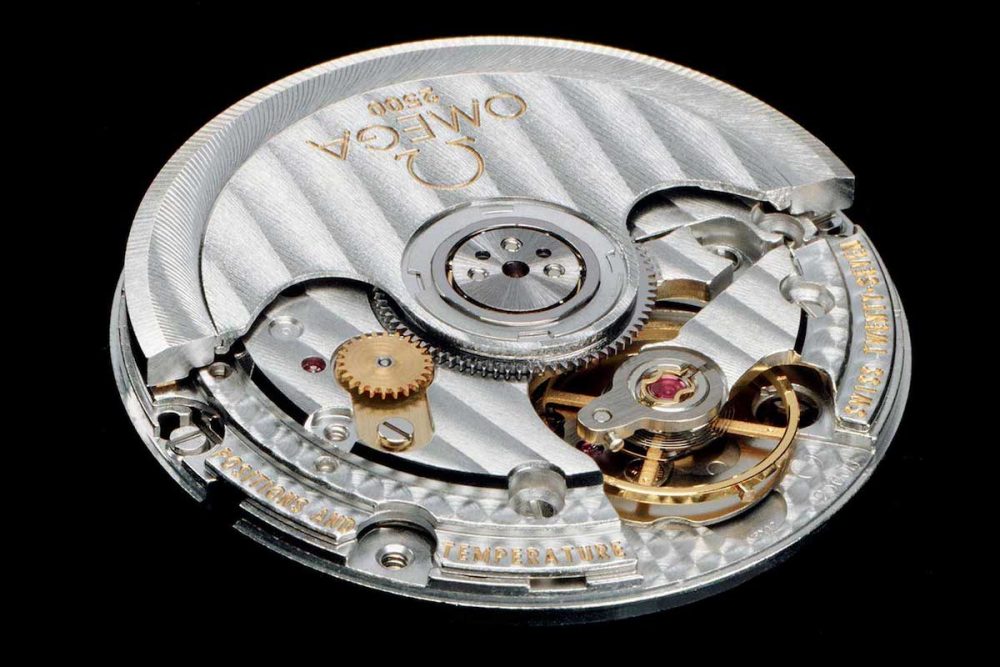 Omega’s calibre 2500, the first movement commercialized with the Co-Axial escapement, based on an ETA 2892 ébauche.

The Master Chronometer certification, an initiative started by Omega and the Swiss Federal Institute of Metrology (METAS) is one of those things that really gives tangible value to watches and is an example of Omega leading the way to protect watches practically. Aside from testing that involves water resistance, chronometric accuracy, and the usual wear and tear of the materials used to build the watch, the most notable aspect of the Master Chronometer Certification relates to the magnetic protection that the watch is able to withstand.

Interestingly enough, such a rating was achieved by using non-ferrous parts in the construction of the movement, including the silicon used for the hairspring. Given the increasing amount of magnetism that we find from electronic devices used everywhere in our modern world, it makes sense to have magnetic protection as a priority in the design of a watch movement. Even better, the way that Omega has gone about it, by using non-ferrous materials for the movement parts instead of shielding a normal movement with a soft iron core, is that one is still is able to get a view of the inside of the watch through a sapphire instead of a closed caseback. 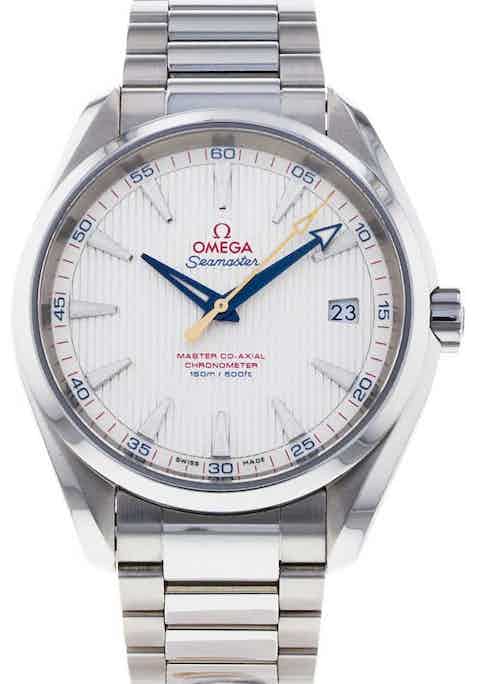 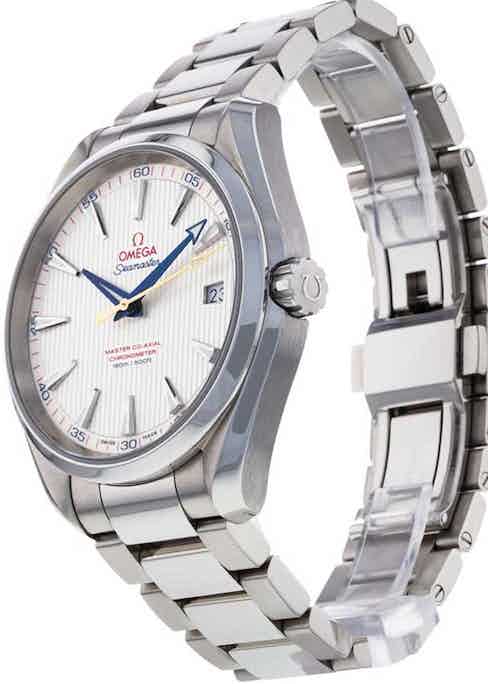 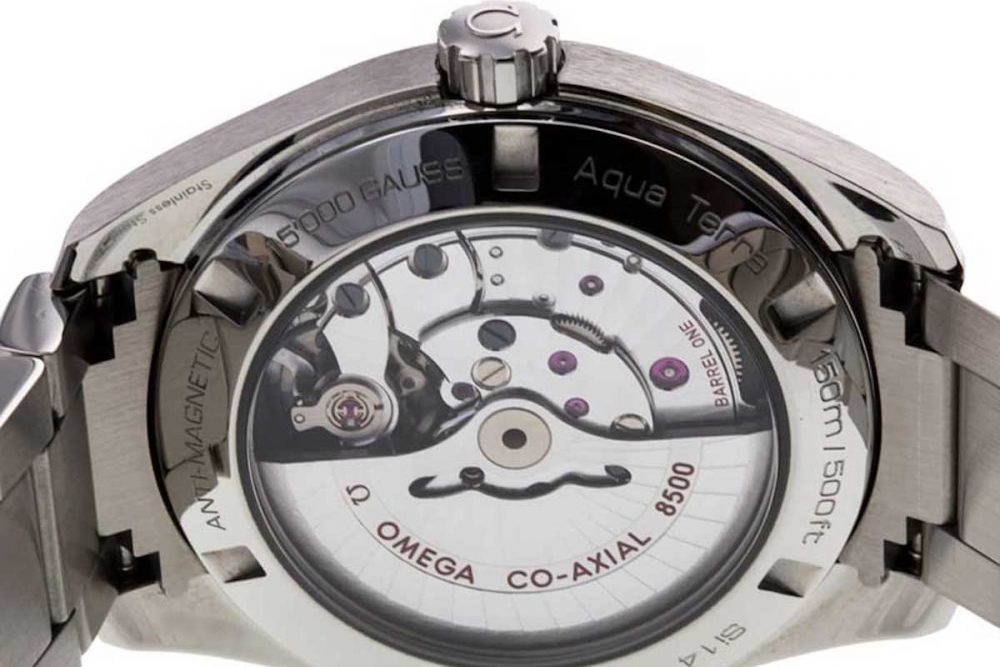 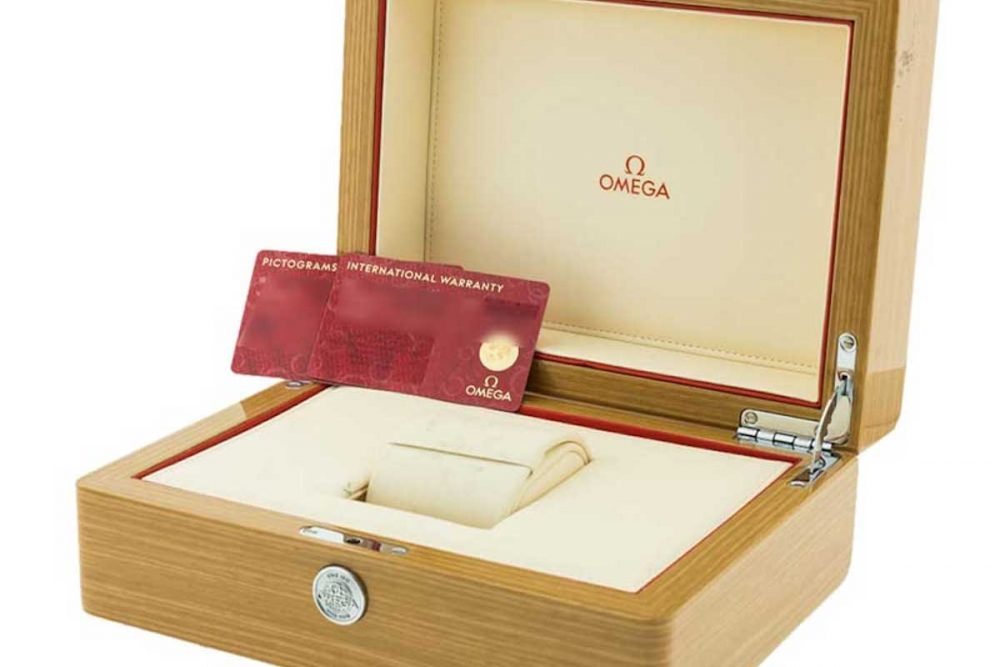 The watch is offered with its original set of box and papers and a two-year warranty from Watchfinder.

The Omega Seamaster Aqua Terra ‘Golf’ Edition in our shop is sized at 41.5mm, with a striking case silhouette and an equally dramatic dial; silver, with a vertical ‘teak’ pattern and highly contrasting hands and markers. The blued handset is a detail picked up by the outer minute track, while the red dial text and yellow seconds hand turns this seemingly monochromatic watch into quite a colourful option. An option well-suited to a formal workplace or a life of adventure, thanks to Omega’s proven reputation for reliability.

Dating from 2017, this watch is powered by the Master Co-Axial calibre 8500, a powerful automatic movement, resistant to magnetic fields up to 15,000 Gauss and visible through the clear case back. There’s a date display at three, and you’ll surely appreciate the design detail of making the date window trapezoidal to echo the shape of the hour markers. 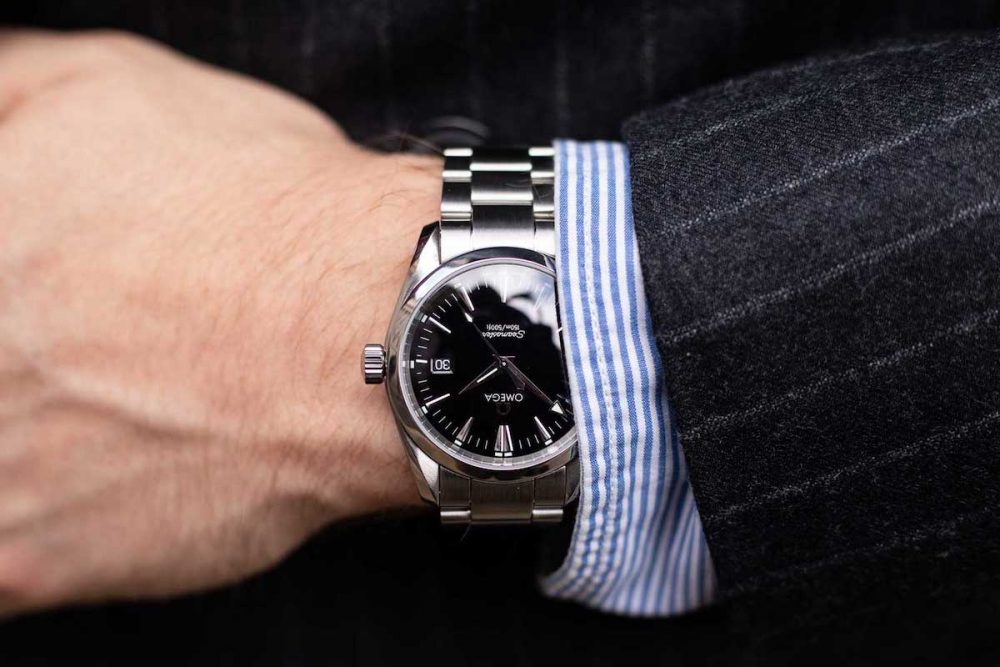 This classic Omega in our shop dates to 2005 and offers everything you need, all in one tidy package. (Image: The Rake) 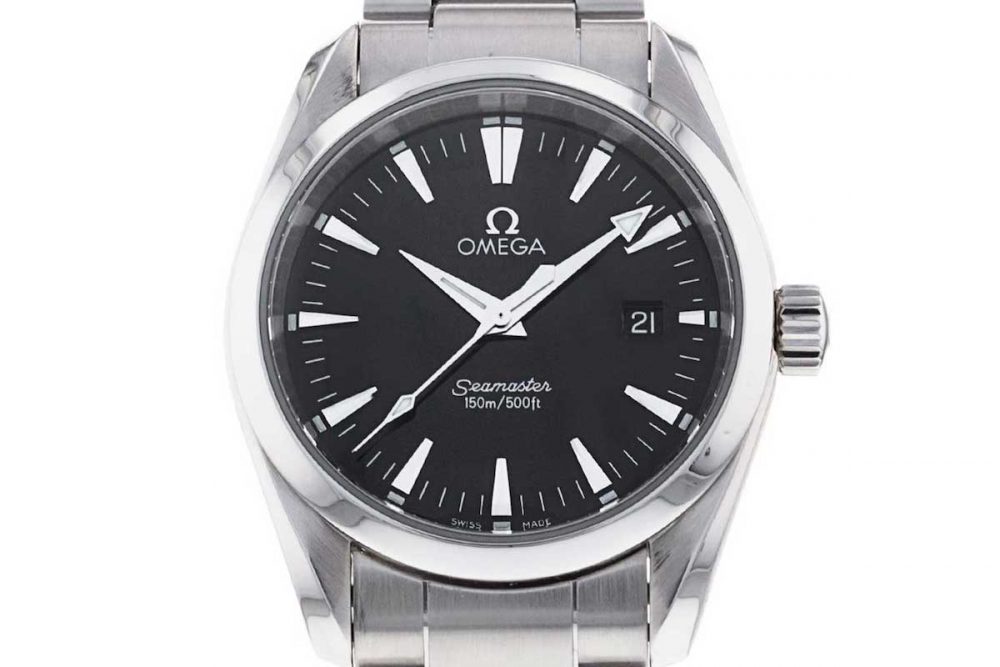 The other Aqua Terra in our collection is a mid-size addition to the Aqua Terra lineup that comes in at a classic and flexible 36mm case width, and the case, with the famous lyre lugs, and it has never looked better. The dial design is restrained, flat black with applied silver batons and matching hands. The blend of utility and elegance is at play on the three-link bracelet, too, with a hidden single-fold clasp. And, thanks to the use of a high-quality Swiss quartz calibre, precision and set-and-forget convenience are guaranteed. This classic Omega dates from 2005 and offers everything you need, all in one tidy package. 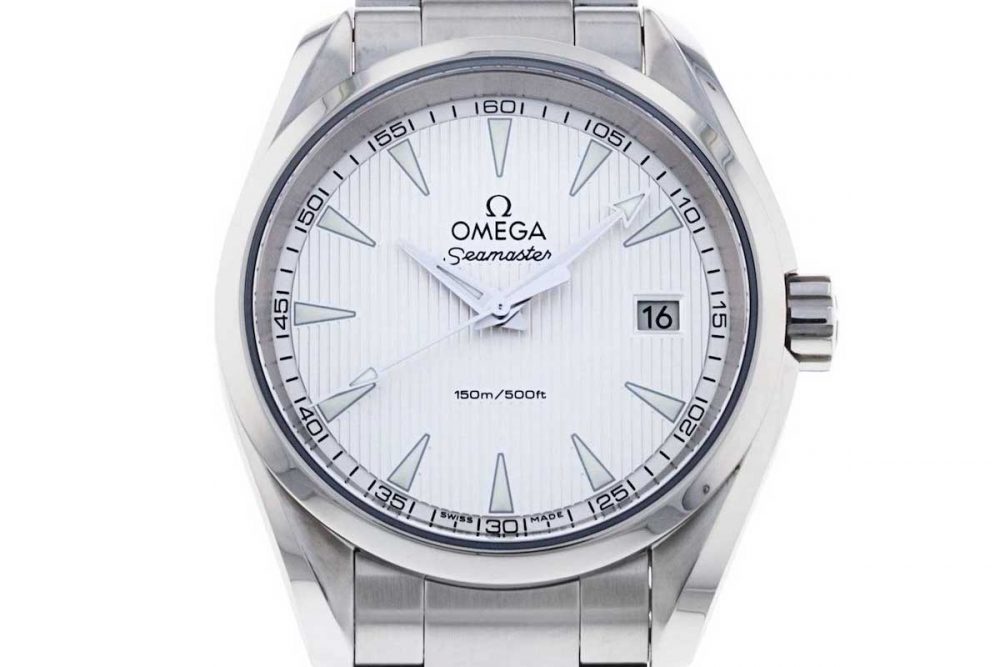 Coming in at 38.5mm, the third Aqua Terra in our shop is the perfect Goldilocks size. 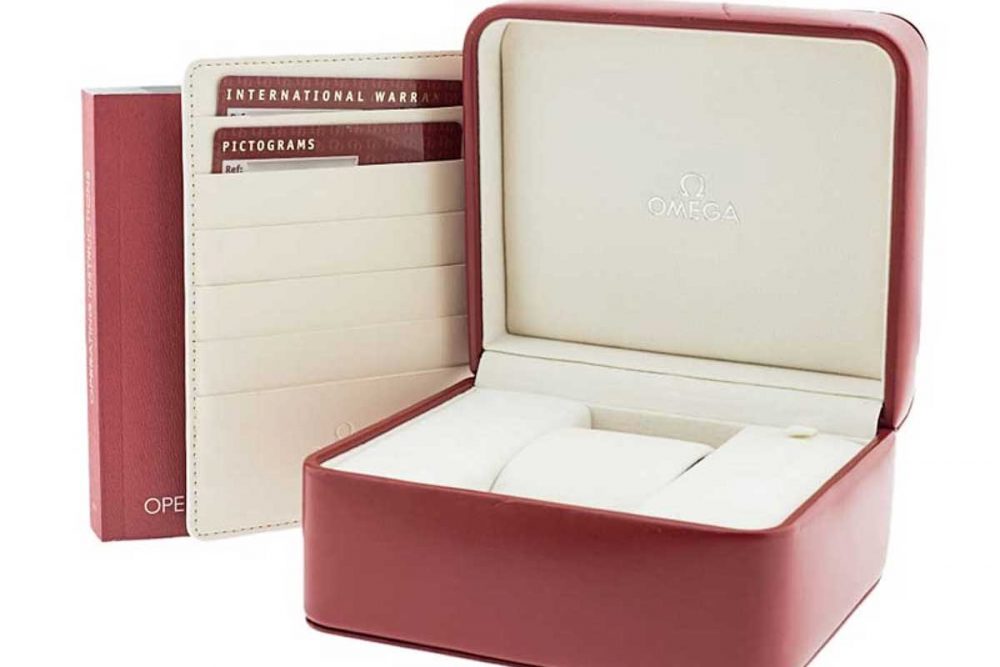 Dating from 2015, the watch is offered with its original set of box and papers.

Coming in at 38.5mm, the third Aqua Terra in our shop is the perfect Goldilocks size. The versatility extends beyond the dimensions to the design. The silver dial with the distinctive ‘teak’ pattern stands out for its finish and elegance, while the solid steel bracelet adds purpose to the equation. Powered by a high-quality Swiss quartz calibre, precision and set-and-forget convenience are guaranteed. Dating from 2015, this Aqua Terra is equally comfortable pulling dressy duty or putting in the hard yards as a go-to work watch.