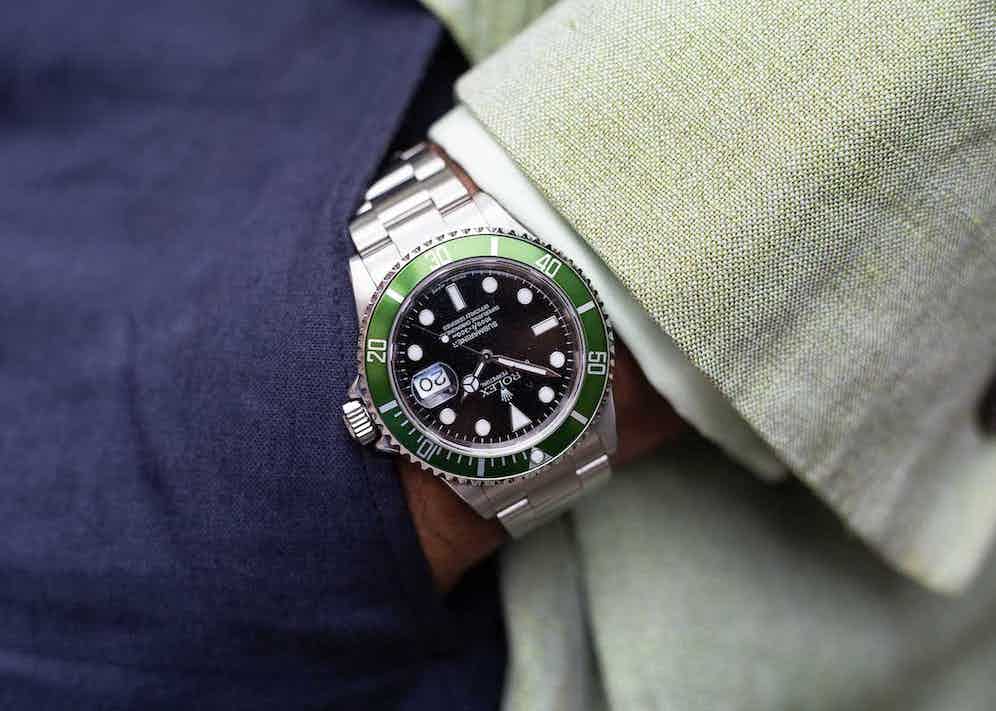 There are dozens of waterproof dive watches available on the market and there have been since the early 1950s. However, if you asked 100 people to name a diver’s watch I’m pretty sure that 90-plus of those asked would name the Rolex Submariner. Much more than a tool watch, the Submariner has become an icon of both horology and style. With or without a date, it’s a timeless classic that Rolex has slowly and gently revised over the years, but is still as true to its DNA today as it was nearly 70 years ago.

1953 was a key year for the Rolex sports line of watches, as it was the year that two of the longest running and most successful watches were unveiled at the spring Basel fair - the Explorer and the Submariner. 1953 was also the debut year for the Turn O Graph reference 6202, a cool but short lived opening of the ToG saga. By 1953 Rolex’s reputation as the de-facto maker of waterproof watches was well established, helped by such advertising opportunities as the Mercedes Gleitze cross-channel swim. Ever the canny entrepreneur, Hans Wilsdorf made sure that the first lady swimmer to make the cross channel swim from France to England was wearing a Rolex Oyster. This advertising is considered key in Rolex’s journey to being the most well-known watch brand on the planet. With that reputation in place, it was a natural progression to making professional watches aimed at the emerging water-sports industry. 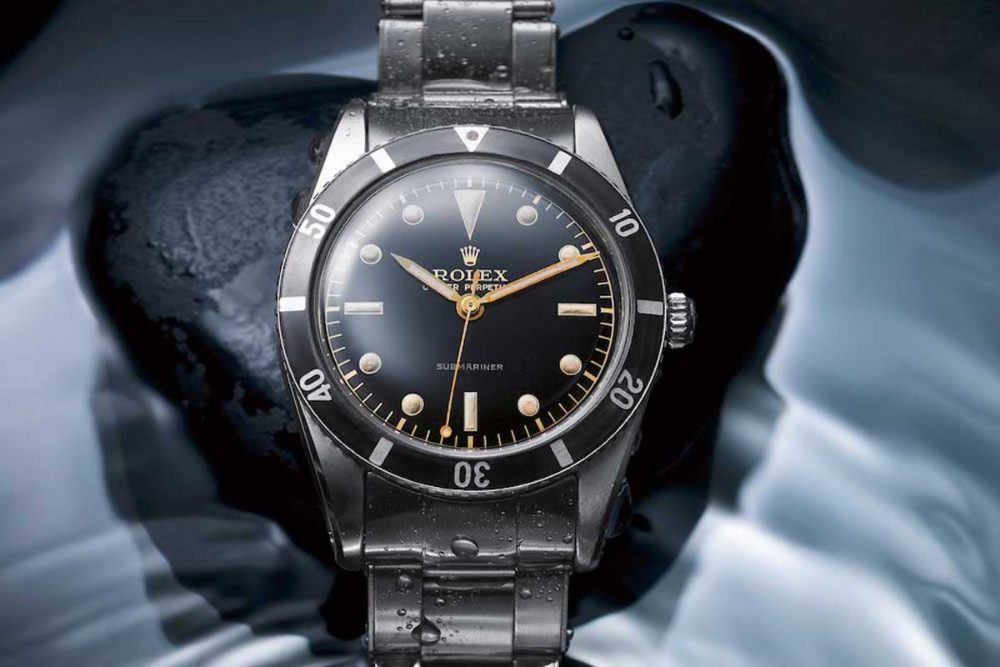 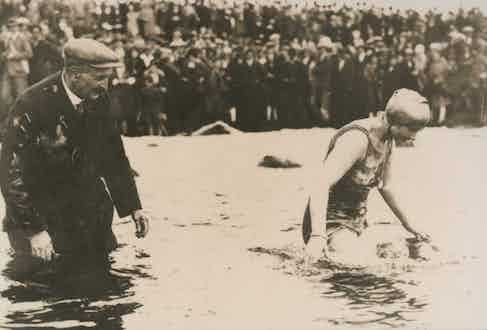 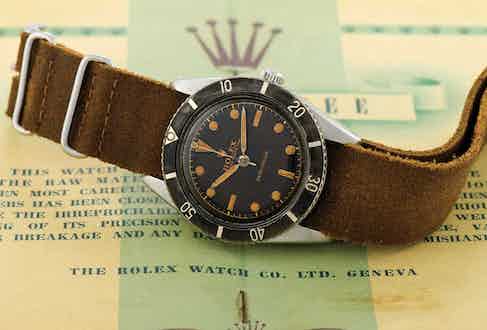 By the early 1950s, modern diving equipment was becoming commercially available. The systems of the early 1940s and post World War II developments meant that more people were able to dive recreationally. Rolex was one of the leaders in providing a wristwatch that would serve as an essential piece of safety equipment.The Submariner reference 6204 was the very first dive watch to be rated to a depth of 100 metres. The watch had a highly legible dial layout, with hands that like the painted hour hands were filled with Radium. This allowed the wearer to tell the time in dim-lit environments such as underwater. The rotating bezel allowed the wearer to measure elapsed time by moving the triangle, also with luminous filling, to the where the minute hand was at the beginning of the dive and therefore knowing exactly how long they had been submerged. Sounds simple, but this was life or death information and so no diver would dive without a good quality waterproof wristwatch.

The Submariner has always been a three-piece design, unlike the monobloc cases of the 40s and early 50s. The three-piece watches consisted of steel mid-cases onto which a screw case back was fitted and an acrylic crystal was pressed over a rehaut on the front of the case and then sealed with a bezel-retaining ring (onto which the rotating bezel also clicked). The winding crown then screwed down against the side of the case thus making the watch hermetically sealed. This was the Oyster system and it was very, very good. For reasons of operational ease of use, in 1955 Rolex unveiled the reference 6200, which had a much bigger winding crown which was easier to unscrew and had a much thicker case that enabled Rolex to depth rate it to 200 metres. This watch co-existed with the 6204 and 6205 (released in 1954); the 6205 being similar to the 6204 but with Mercedes pattern hands where the 6204 had pencil hands. The 6200 was the first of what collectors now refer to as Big Crown Submariners and by default the 6204/5 were known as small crowns. These watches were fitted with the A260 and A296 movements. 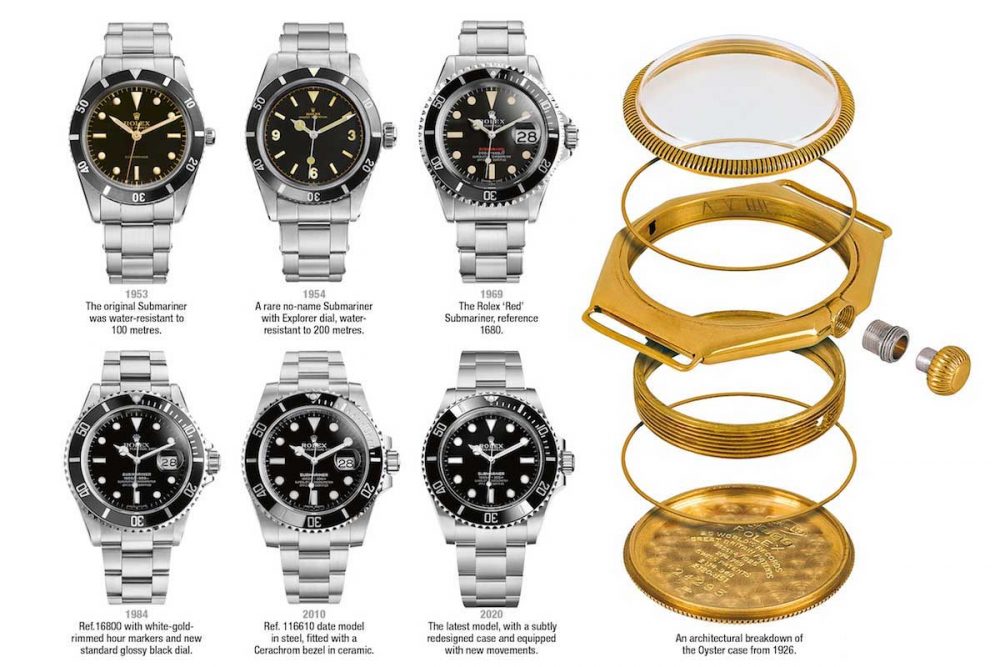 The evolution of the Rolex Submariner

These early Subs were experimental and market-testing pieces, which Rolex consolidated into two references in 1956; the Big Crown was reference 6538 and the small crown was reference 6536. In 1958, Rolex released the Big Crown 5510 and Small Crown 5508, both of which housed the latest Rolex caliber, the 1530. These watches are viewed as transitional models, mainly due to the fact that they housed the movement that would stay in the Submariner watches for the next 30 years!

In 1959, the Sub went through its biggest transformation. Gone was the small 6mm crown and gone also was the large 8mm crown. Instead, the new twin-lock 7mm crown was introduced on reference 5512, a non-date Submariner that had new crown-guards. These crown guards flanked the winding crown and offered protection for arguably the most vulnerable part of the watch. The 5513 was introduced in the early 1960s and was fitted with the 1530 movement (which pretty quickly was changed to another non-chronometer movement, the 1520). The 5512 was upgraded to chronometer status in 1963 so for a year they co-existed on an even keel. The 5513 outran the 5512 and had a staggering run of 27 years. 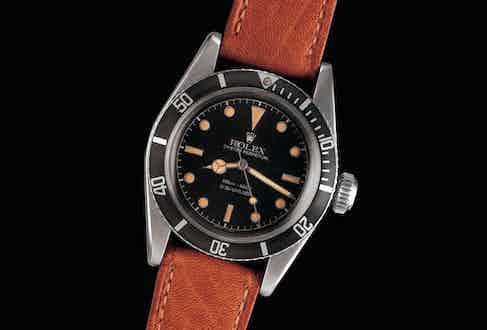 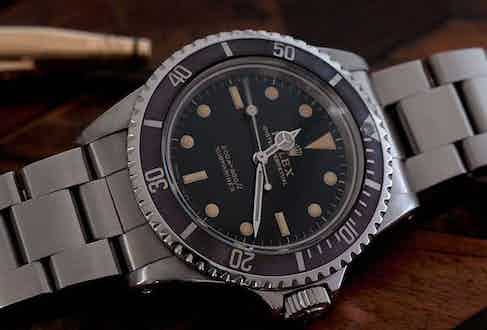 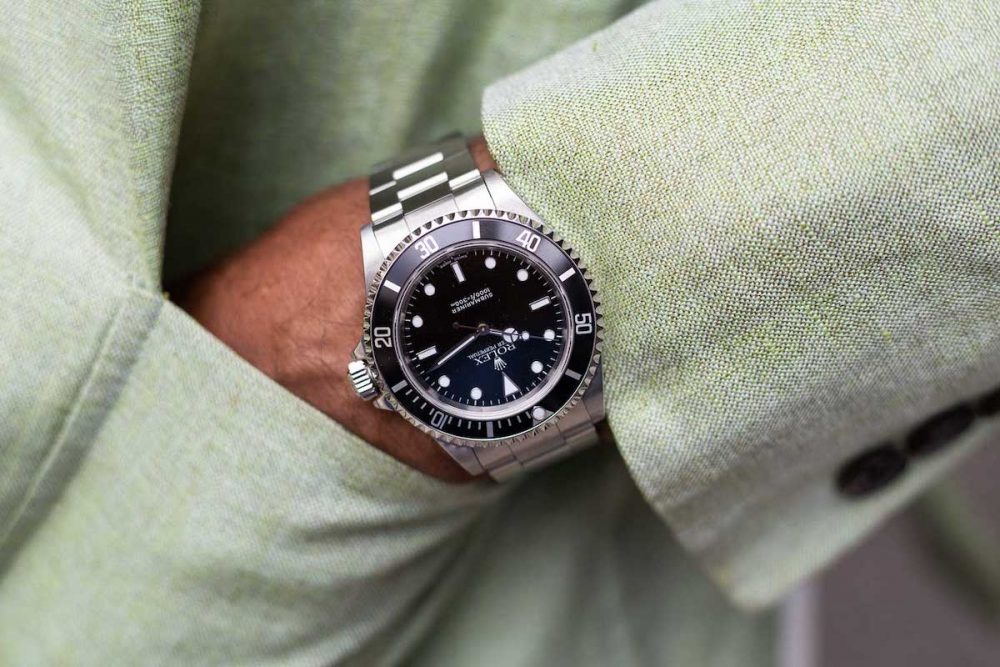 The reference 14060 was the successor to the 5513 in 1989 and whilst it maintained the aesthetics and character of the 5513 it was re-packaged for the new era of sport watches. Out went the scratch-prone acrylic crystal and in came a new flat sapphire glass. Rolex kept the steel bezel ring and aluminium insert, albeit a little bigger for the sapphire glass, but the bezel featured a unidirectional bezel that was technically an improvement to the old spring washer system. The 14060 also heralded the arrival of the new 3000 series calibre, which utilised some of the new developments in calibre technology into which Rolex had invested so much research and development. In 2001 Rolex updated the movement in the 14060 and gave the watch the letter M at the end of the reference number to represent the updated movement. The calibre 3130 was chronometer rated and so the text Superlative Chronometer Officially Certified was added to the dial making them ‘four line’ dials – not seen since the 5512 in the early 1970s.

In 1969 Rolex introduced the reference 1680 Submariner Date, which was about the most complicated a diver’s watch needs to be. As a Rolex fan I’ve often pondered the question as to why the date function was added. Was it because the brand wanted to cater more for the everyday guy who was wearing the watch or was it, as per the Seadweller, to enable divers who were on commercial dives and decompressing for days on end to keep a track of the days? Either way, the Submariner Date has been a companion to the no-date from 1969 until now. The 200 metre rated 1680 featured the calibre 1575 and the introduction of a new shaped crystal with straight edges and a date magnifier known as a cyclops. The early versions of the watch had the word ‘Submariner’ in red colour before the switch to white text. In 1979 the watch was revisited and updated to include a new unidirectional bezel and sapphire glass, which meant the watch was depth rated to a 50 percent deeper depth of 300 metres. The reference 16800 kept the matte dial with painted hour markers until 1984 when the dials became glossy with applied white gold markers with luminous filling. 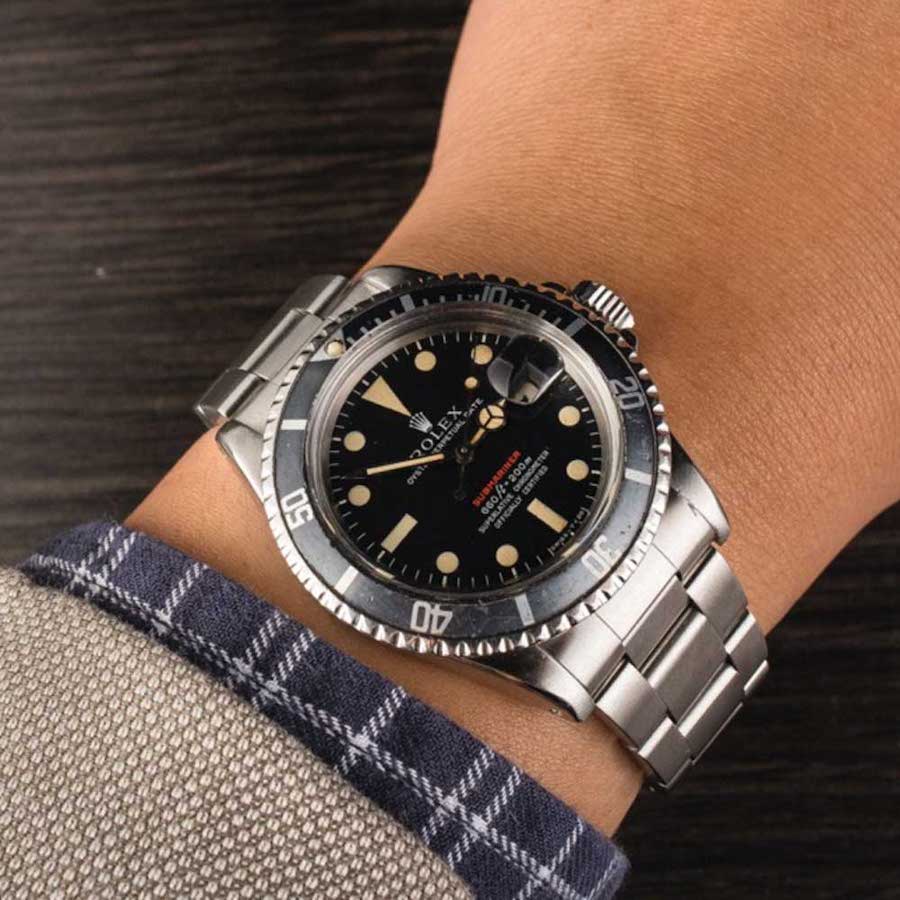 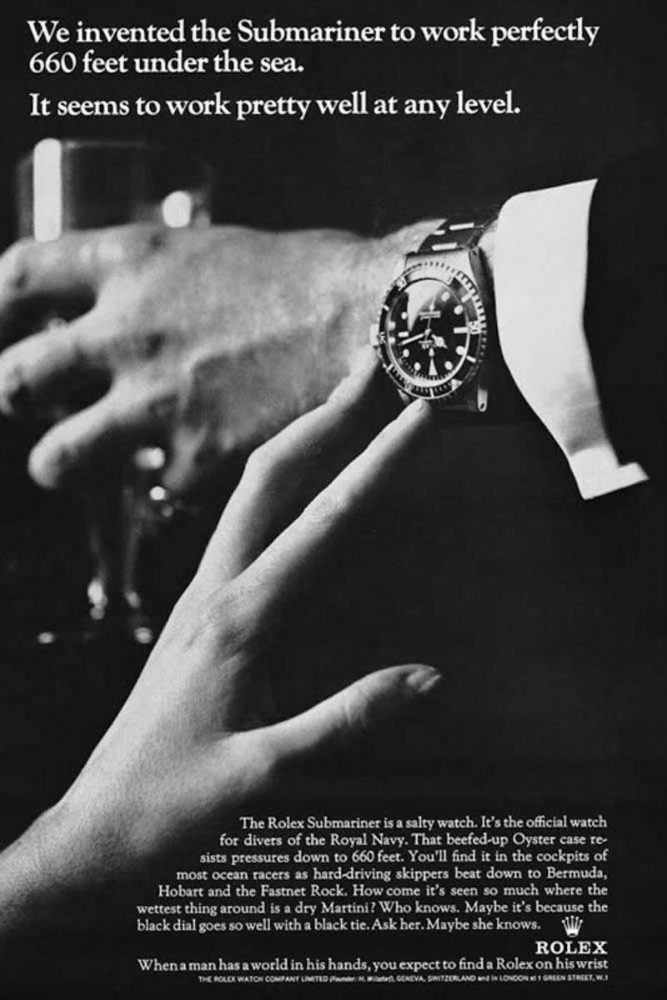 An old advertisement for the Submariner

The term transitional is often used when collectors make sense of the chronology of Rolex models. The Submariner date perfectly illustrates this with reference 168000. Produced for a matter of months in 1988 before the introduction of reference 16610. It’s virtually impossible to tell the difference between a gloss dial 16800 and 168000 as the only difference is the steel that was used. The 168000 used the new 904L steel, which replaced the traditionally used 316L steel. In 1989 the 16610 Submariner Date was introduced which was again virtually identical to the 168000 except for the movement which was calibre 3135, replacing the 3035 from the 16800. The 16610 had a 21-year run that included the 16610 LV watch in 2003, which was released to celebrate 50 years of the Submariner. The LV had new ‘maxi’ hour plots that were noticeably bigger than a regular 16610 and the watches had a green bezel insert which led to the collector nickname ‘Kermit’ (as in the frog). It’s worth noting that the Kermit is now one of the hottest watches on the modern-vintage market and so it's not surprising that in 2010 with the launch of the reference 116610 Submariner date, with so-called maxi case and ceramic insert, that two versions were available. A black dial with black bezel and also a watch with green dial and green bezel. The new green watch had a new nickname – ‘The Hulk’! 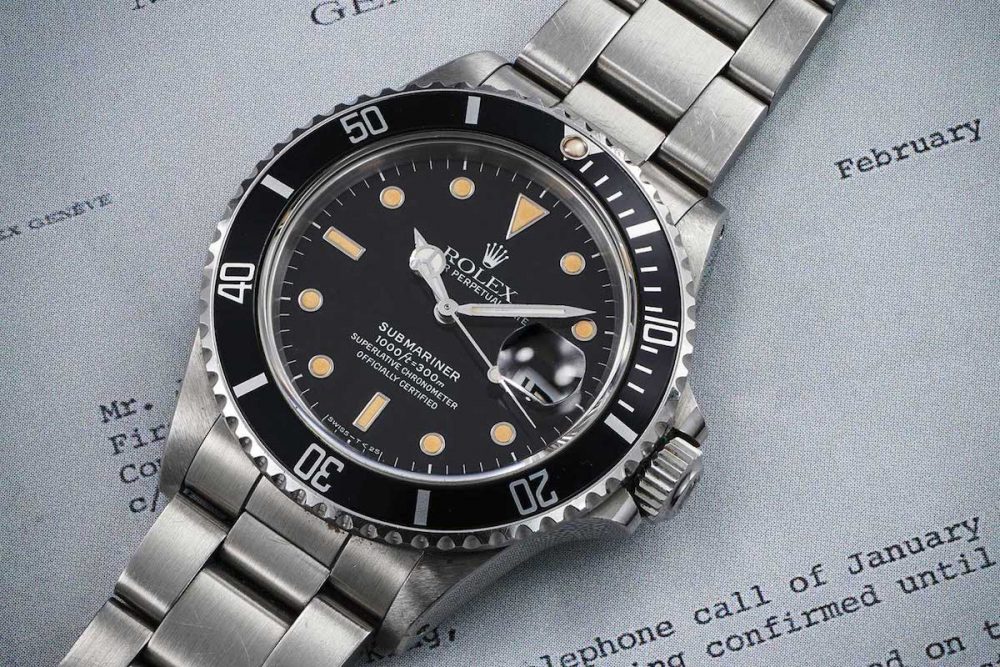 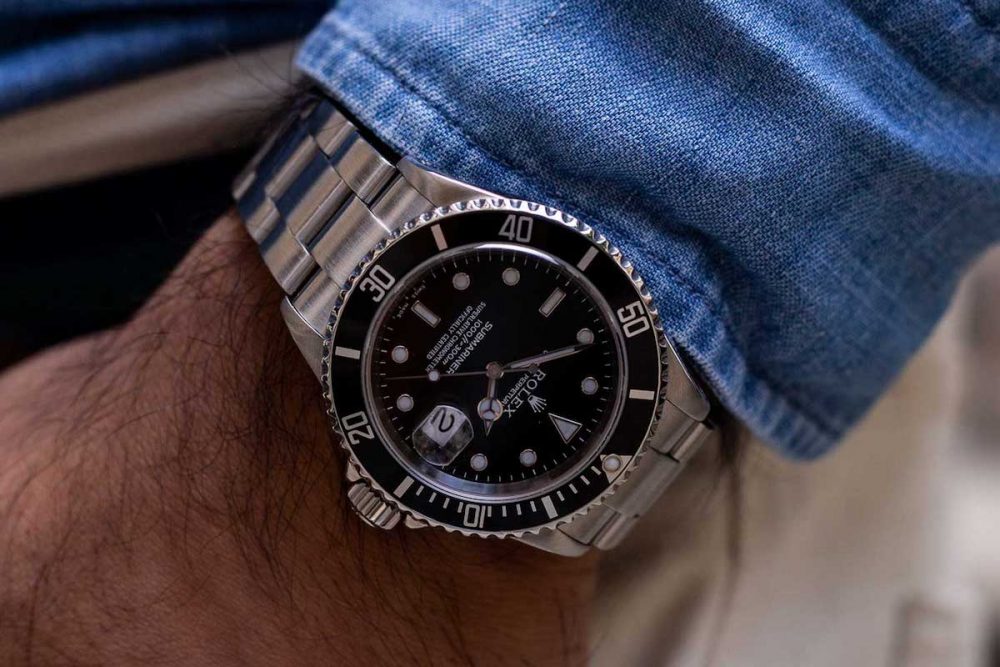 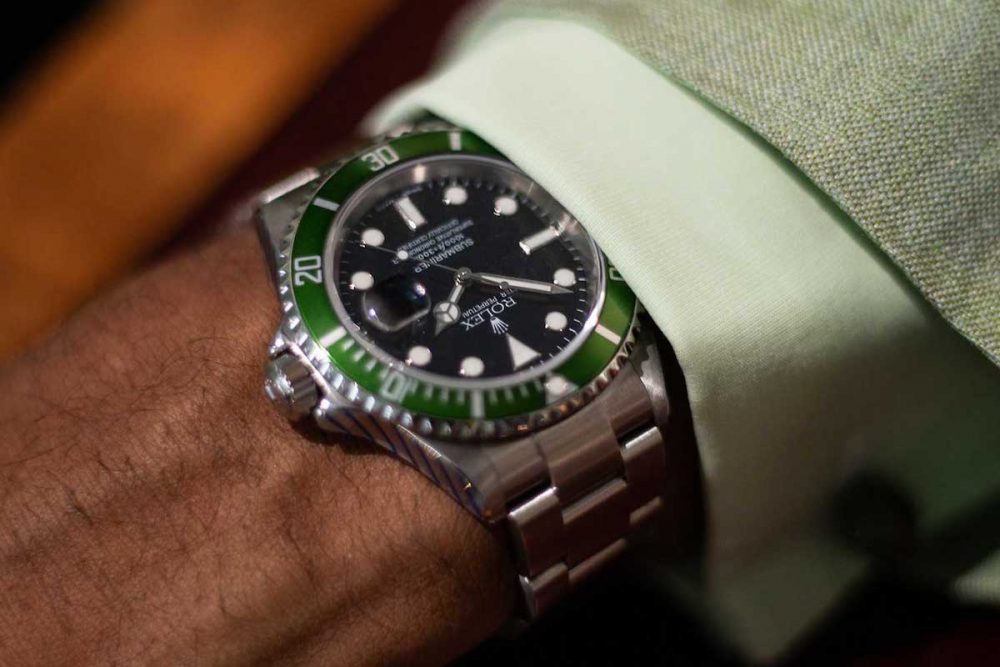 The ref. 16610LV was released to celebrate 50 years of the Submariner in 2003 and was soon nicknamed "Kermit" by the collecting community (Image: The Rake) 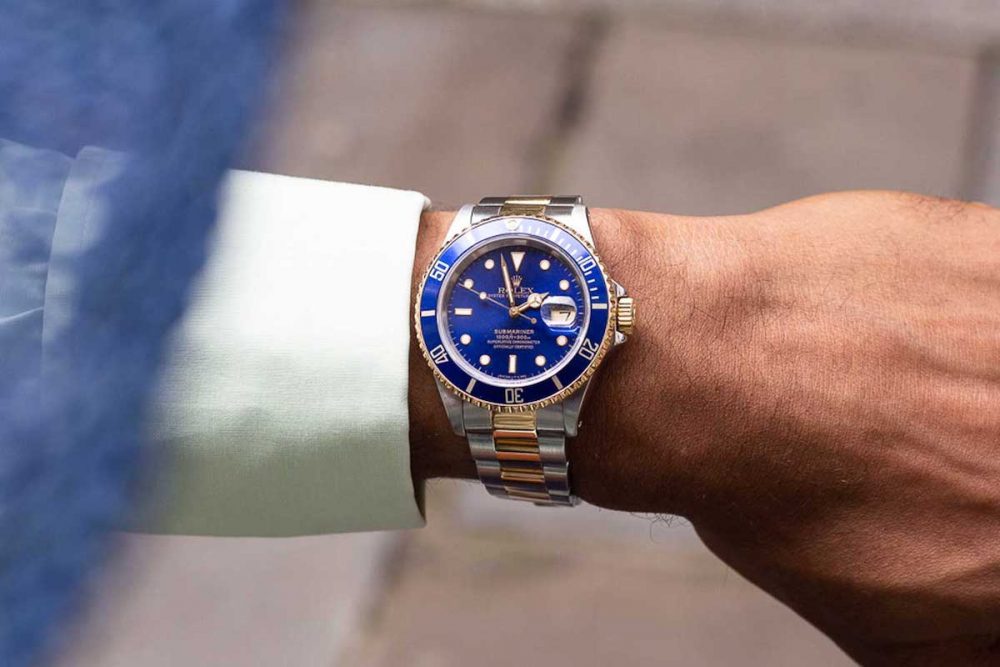 The first two-tone, or to use Rolex parlance Rolesor, Submariner Date was unveiled in 1984 in reference 16803. The watch co-existed alongside the 16800 in steel and 16808 in yellow gold and falls into the era of transitional sports Rolex benefitting from the afore-mentioned sapphire crystals and 300m depth rating. The watches were available with both blue and black dial/bezel combinations as well as an early version with so-called ‘nipple’ dials, where the hour markers resembled…well, nipples! In 1988 Rolex delivered the reference 16613, which was virtually identical to the 16803 but housed the new Calibre 3135 movement. These watches ran for almost 20 years and went through a number of changes to the luminous material used, bracelet construction and the use of lug holes. Then in 2009 the new case style was introduced, with much ‘fatter lugs’ and a ceramic bezel insert. Reference 116613 was still available in the blue or black uniform, but the dials had maxi hour markers and hands. 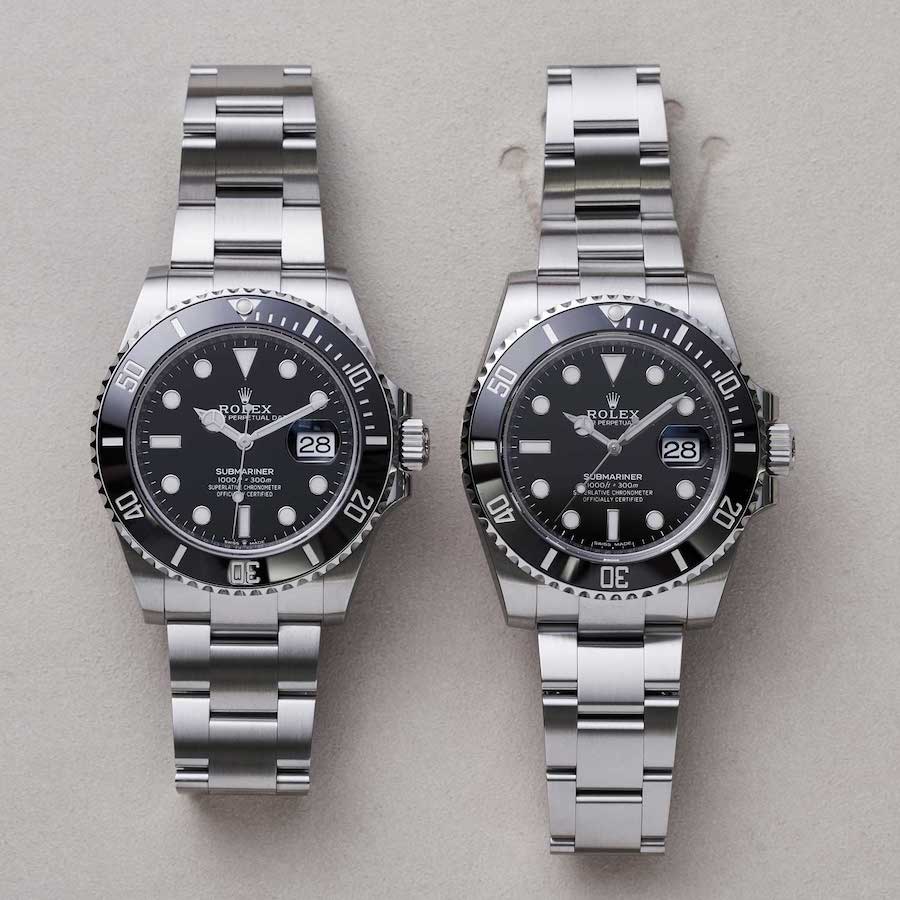 A side by side comparison of the 2020 ref. 126610 with the outgoing 2010 ref.116610 both in Oystersteel; at 41mm the new Submariner case represents a marginal increase in size from its predecessors 40 mm in diameter and is still a full 2mm smaller than the 43mm diameter of its deep saturation dive sibling the Sea-Dweller. (©Revolution)