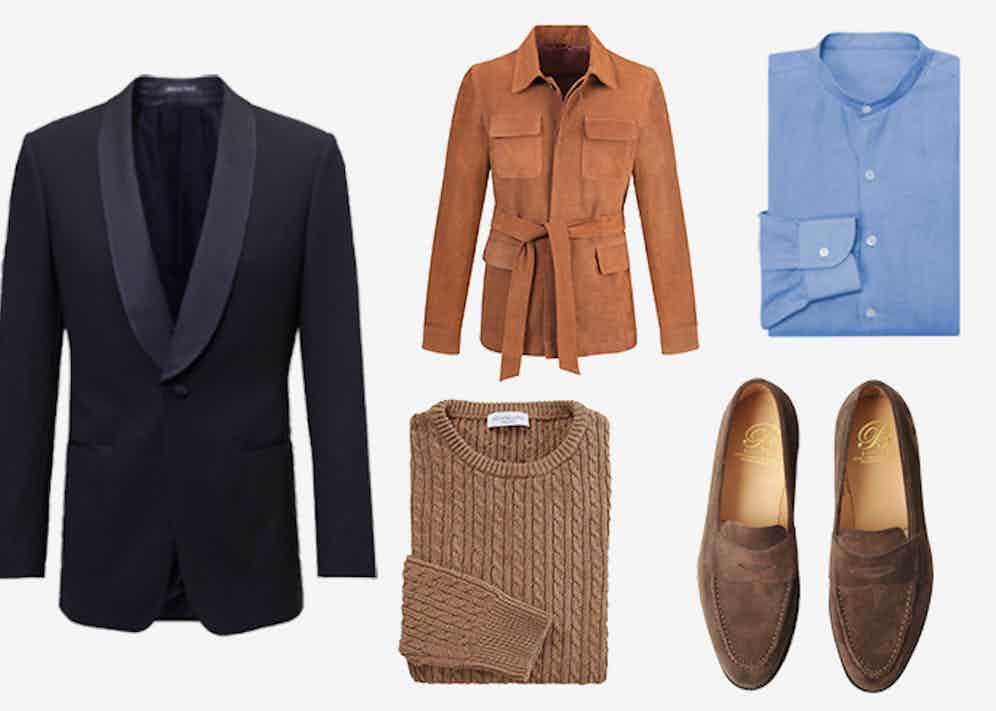 After a working week wearing a shirt collar every day, the weekend is all about ditching the formality for a more casual aesthetic. That said, it's no excuse to get lazy.The Rake's editors and writers share their advice on how to go collarless while still retaining a lofty level of sartorial sophistication.

The call to casual clothing is becoming irresistible. I have been unbound from the mast and writing to the siren call largely because brands are trying to master the grey area between classic formality and laid-back insouciance. The Henley shirt has always been a handsome alternative to the classic cotton shirt, and functions well as an undergarment, especially in hot weather. To throw a suede jacket over it that can be worn open or closed ticks the box whereby you not only look sharp, but also unashamedly casual.

Members' clubs often insist on a collars-only policy, even in these days of increasingly relaxed sartorial rules. Why? Because whether cutaway, spread or tab, collars are inherently and invariably smart. They frame your face and give structure to your neckline, conveying a certain element of authority. But there are times, weekends especially, when a) they’re simply overkill or b) after a working week, you just don’t feel like scaffolding your neck with fabric. In such instances, I’ll reach for a fine-gauge cable knit sweater such as Richard James’ brown version pictured here. Although you’d normally associate cable knits with the winter, James’ version is light enough for summer evenings. Pair it with Lardini’s off-white pleated Madrid trousers for a considered but casual aesthetic and glue the look together with Elliot Rhodes’ tan handwoven belt.

More than physically not having to wake up before the birds on the weekend, there’s also something incredibly cathartic about not having to put on clothes associated with work come Saturday. While a collared shirt looks sharp, it’s a relief to occasionally let loose, and this piece from Anderson & Sheppard is a way to be smart and comfortable. Pair with some lightweight trousers, slip-on loafers, and you’ve got an easy casual look.

I won’t bore you with the adage that formal dress codes are becoming increasingly more relaxed each season, that’s ancient news. It’s a thing, dear Rake reader. When it comes to evening wear, relaxed codes of dress become interesting, and I’m eager to put it to the test by sporting a T-shirt beneath a shawl lapel dinner jacket from Chester Barrie. In doing so, I’ll no doubt infuriate the purists out there, for which I can only offer my sincerest apologies. I wouldn’t opt for a white T-shirt, as that would create too much contrast, but instead a tonal choice will subdue the ensemble and make it appear a bit more understated and tasteful. I’ve never been one for the traditional pump, either. For me, it’s too dated (I’m a millennial, after all). The only suitable alternative is a Belgian loafer, either in suede or velvet, and Rubinacci wins that competition all day long.

Now that it’s warming up in the city, there are few better places to ditch the collar and catch a cool breeze than on board a yacht. While on your voyage you’ll want to swathe yourself in some suitably maritime attire. The Hamilton and Hare white Pima cotton T-shirt is as relaxed as it is timeless and when paired with Rubinacci’s light grey wool trousers, you have a look that’s both comfortable on deck and smart enough for disembarking for lunch. Sera Fine Silk's striped braces are woven from a fine silk and are bold enough to ensure that you’ll stand out on the horizon.